We bought a World War II ship on eBay

Scrolling through eBay looking at listings for broken-down boats is something of a ritual for Simon Robins, who spends much of his spare time rescuing and renovating crumbling vessels.

But his wife and business partner Gemma thought he might be taking his passion a little too far when he suggested they purchase a former World War II ship that popped up on the auction site in January.

Once she saw how excited Simon was about rescuing the 72-foot motor vessel built for the UK’s Royal Navy in 1943 and realized it was stationed relatively near to their home in Wrexham, Wales, Gemma agreed to go and view it.

“I didn’t really want a ship,” Gemma tells CNN Travel. “But when I researched her [the ship’s] history, I realized that she’s a really significant boat and there’s not many of them left in the world.

“It was just so heartbreaking to see her so neglected and abandoned. It pulled on my heartstrings.”

While over 400 of the Harbour Defence Launch (HDML) were constructed 80 or so years ago, very few are still around today.

These people have gone all-in on boat life. Here's how they did it

During World War II, as part of the ML Flotilla, the ship served as a navigation leader in Operation Neptune, the pivotal seaborne invasion of northern France known as D-Day.

It was repurposed as a fast dispatch boat after the war, before being transferred to the UK’s customs agency. By the 1970s, L1392 had been transformed into a charter vessel and renamed Sarinda.

After going through several reinventions, including being converted to a luxury motor yacht, it was decommissioned in 2013.

Gemma and Simon, who run a business building camper vans together, knew that fixing up the 80-year-old vessel, which weighs 59-tons, would cost them thousands and require a great deal of time.

The pair are also well aware that there are many things that can go wrong while trying to restore a boat of this age and magnitude.

However, they resolved to take on the risky challenge, estimating it would take a decade to complete, particularly as they would have to earn the money for the repairs as they went along.

We Risked Everything On A Rotten Boat! #boatrestoration 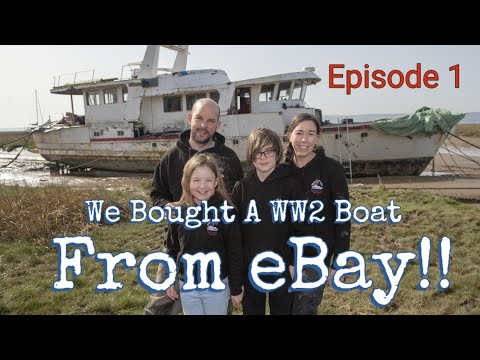 “If it was a World War II plane, she would have been in a museum by now,” says Simon, who admits he was stunned when Gemma gave the project the go ahead.

“I feel historic boats do not get the care, attention and publicity they deserve, with a bit of love and hard work she will hopefully live a very long life.”

While he’s always loved “tinkering with old broken things,” Simon’s passion for vintage boats began a few years ago, when he purchased a 1962 wooden boat, also from eBay, for £23, and restored it.

“I would much prefer to buy something broken and fix it up than buying new,” he adds.

As he and Gemma have no use for a war ship, the couple aren’t planning to restore the vessel to its original glory.

Instead, they hope to use it as a vacation home one day, but stress that they’ve made no definite plans with regards to its long term future.

“When we bought it, we wanted to save it,” says Gemma. “To preserve a piece of history. We haven’t really thought about the long term.

“But Simon wants to retire and go and sail the Mediterranean.”

When family and friends learned of the project, many were keen to visit the ship, currently positioned on the mud flats at the Dee Estuary, which spans the English / Welsh border.

However, Covid-19 restrictions put paid to the prospect of anyone traveling a considerable distance to the site.

Keen to keep their loved ones in the loop, Gemma decided to launch a YouTube channel, Ship Happens, where she’d regularly post videos detailing any developments.

The man who found the Titanic is on a new quest

The couple spend their weekends working on the boat, along with their children Emilia and Mason.
Courtesy Ship Happens

The account, launched at the start of the year, now has around 26,000 subscribers, with thousands of people from all over the world tuning in to each episode.

“We thought we’d get about 20 views,” says Gemma. “I try to respond to every comment. But now we have so many on YouTube, I can’t keep up.”

As a result of the success of their channel, the Robins have begun selling Ship Happens merchandise, while many subscribers have sent donations towards the cost of renovating the ship, along with gifts for the family.

“It blew my mind how generous and helpful people are,” she adds. “Even now it’s still a shock to us when people send us donations. The poor Amazon driver doesn’t stop [delivering packages to them].”

The couple have also been in touch with the owner of Sarinda’s sister ship, the Medusa, which has been preserved by the Medusa Trust, and are planning to go to see the ship, moored in Gosport on England’s southern coast, in the coming weeks.

“Any advice I need, I go to Alan Watson [chairman and captain of the Medusa,] because he’s the person who’s been there and done it,” adds Gemma.

The old diesel engines on the World War II ship, which served as a navigation leader in Operation Neptune.
Andrew Price/View Finder Pictures

“And there’s a couple of people in New Zealand [who own one] as well. I’ve sort of managed to track down all of the HDML owners in the world.”

The couple says they’ve spent around £8,000 on materials since purchasing Sarinda in January and believe the total renovations costs will exceed £50,000.

However, Gemma and Simon have been able to undertake all the work themselves so far, with help from their two children, Emilia and Mason, and Simon’s parents.

“The biggest problem we’ve got is the location she’s in,” she explains. “You can’t just drive your car or your boat right up to her. Just getting to her is a challenge.”

While well wishers have offered to help them complete the work, Gemma admits she’s worried about the health and safety aspect of bringing volunteers on board, so hasn’t taken anyone up so far.

When can we go on a cruise again?

They hope to one day be able to sail the ship as part of the floatilla on the anniversary of the D-Day crossing.
Andrew Price/View Finder Pictures

They are currently working towards getting the ship seaworthy enough to take part in the anniversary of the D-Day crossing, which took place on June 6, 1944 and is marked every year, but stress that this will be a while off yet.

“With all the history behind Sarinda, to be able to take part in the D-Day anniversary crossing to Normandy would be a great mark of respect to all that served on her,” adds Simon.

Although restoring the ship continues to be a lengthy project, the donations they’ve received from supporters have helped to speed up the process.

“We said [it would take] 10 years when we first bought it, but YouTube is escalating the project,” adds Gemma.

“Everyone wants to see it done. That’s upped our timescale. And the contributions are really helping, because we’re not in the position to pour loads of money into this boat.

“We’ve still got commitments and bills to pay. So the additional support we’re getting from people is really helping the time frame.”

For now, the Robins family are simply savoring the experience and say spending time together working on the project as a family, and becoming unlikely YouTube stars, has been a fantastic, albeit challenging, process.

“It’s great to be able to do it as a family and spend time with the kids as well,” says Gemma. “They’re quite enjoying it and obviously they’re learning new skills.

“We spend all our free time on the boat. And I’ve also got the YouTube side of stuff, editing all the videos takes longer than I thought it would. The only time I have off is when I’m asleep.”