The day plane spotting took over the UK

As Storm Eunice battered the UK with 122 miles-per-hour winds on Friday, people across the country were told to stay in their homes.

And as they sheltered from the storm, many took up a new hobby: plane spotting.

With the storm raging across the south of the UK, over 200,000 people were tuning in to a livestream of airplanes battling the winds as they landed at London Heathrow.

Avgeek Jerry Dyer’s Big Jet TV YouTube channel was trending on social media, reaching number two on Twitter in the UK, with one of his trademark phrases as planes hit the ground, “bosh,” at number three.

As Dyer tracked a Qatar Airways A380 making two balked landings and coming in for a third and final time – which was successful – more than 230,000 people were watching his livestream from a field outside the airport.

Separately, over 53,000 people were tracking the plane’s route on Flight Radar 24 as it circled the UK capital while attempting to land. 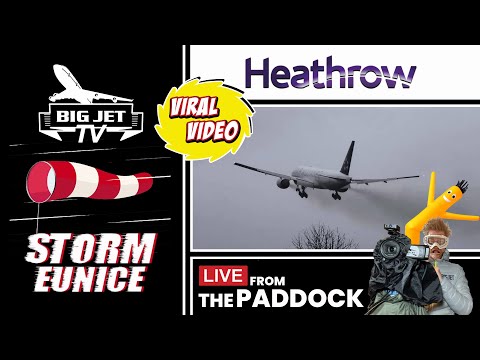 When your plane touches down but doesn't land

Dyer, who lives near Heathrow, does a livestream from Heathrow every Wednesday, but rushes to the airport to film every time there’s bad weather, he told CNN earlier this month, when his video of a British Airways plane seemingly striking the ground with its tail as it performed a balked landing went viral.

“It’s a lot more exciting to watch than aircraft just landing down and touching down and all that kind of stuff. It’s the battle, isn’t it? It’s the forces of nature against an alloy tub with wings on it that we built and we have to control it down onto the ground in Mother Nature’s winds.

“It’s a fantastic thing to watch.”

Dyer – who CNN was unable to reach during Storm Eunice – also said that avgeeks go wild for his windy videos: “Whenever there are stormy conditions, we’re always out there – and it’s always a great success.”

But his livestream of storm Eunice has made it far beyond his usual avgeek crowd.

Chelsea Football Club tweeted about his feed, as did Netflix, while UK TV channel Dave jokingly offered him a prime time show.

Meanwhile, social media was full of Dyer’s catchphrases: “fair play,” “easy, son,” and “go on then,” with his cheeky persona endearing him to thousands.

He shouted “drop it” to one Air China plane as it appeared to float just off the runway before touching down, and “go on, the Brits” as British Airways planes wobbled onto the tarmac.

Previously, he had told CNN about “armchair pilots” watching his feed.

“People will say, ‘Oh that was nothing at all, I could have handled that easily,’” he said, talking about the split-second decisions that pilots have to make during landing.

Sometimes, the armchair pilots don’t know how to fly themselves, and sometimes they’re qualified pilots criticizing their peers, he said.

“You do get qualified pilots, who are a little bit jealous [of spectacular landings], maybe because it wasn’t them. I can assure you that if it was them they’d be walking around with their chests all puffed out.”

Today, having taken plane spotting from a niche pursuit to a national hobby in the UK, it’ll be Dyer himself puffing out his chest.