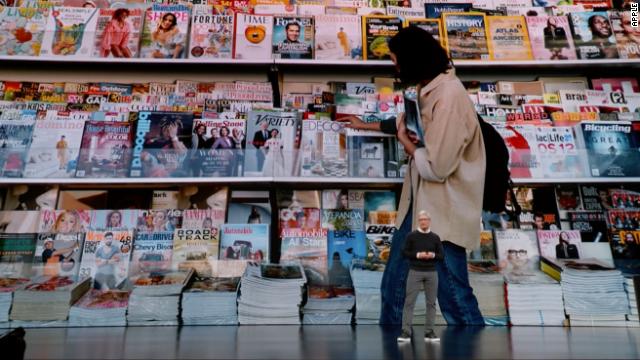 "Our goal for Apple News+ is to create the best magazine reading experience for a mobile device," Roger Rosner, Apple's VP of applications told the crowd at Apple's media event on Monday.

Rosner said that the product will have 300 magazines across all sorts of topics including entertainment and news. Rosner and Cook both stressed that Apple News+ would be a trusted source of news.

Goldman Sachs CEO David Solomon was seen at Apple Park on Monday ahead of the event.

Goldman (GS) and Apple (AAPL) are reportedly teaming up to offer a new credit card. According to a report in the Wall Street Journal, the card could work with the Apple Wallet app to help consumers set spending goals, monitor rewards and view balances.

The new credit card could be unveiled at today's event.

Apple’s new ventures in entertainment and news mean there are lots of unusual visitors to Apple headquarters this morning.

There are Hollywood celebrities, entering through a private entrance, preparing to appear on stage to promote the company’s slate of TV shows.

And there are news industry executives like Patrick Soon-Shiong, the owner of the Los Angeles Times, who walked up to the Steve Jobs Theater with the paper’s executive editor Norm Pearlstine. The two men played coy when I asked if their presence indicates that the L.A. Times will be included in Apple’s news subscription service.

There are numerous entertainment and media beat reporters here too – visiting Apple Park for the first time. Lots of people taking selfies because they've never been here before. 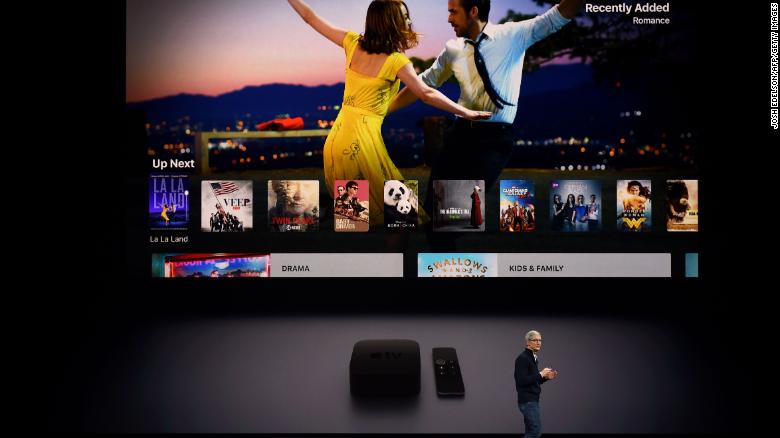 We'll know for sure soon enough, but in the meantime:

The Wall Street Journal reported Sunday that Apple's video product will let consumers "subscribe with a single click to channels such as Starz, Showtime and HBO" for $9.99 each. That'd be a discounted rate since HBO runs subscribers $14.99 while access to Showtime and Starz costs $10.99 and $8.99, respectively.

Obviously these are just reports, but it's possibly the first glimpse at how much Apple's video product may cost and how it might function.

WSJ also reported that Apple's (AAPL) is planning to "unveil the first footage from some of its new original TV shows," and that some of the big names behind those shows, like Reese Witherspoon and J.J. Abrams, have been invited to the event.

Additionally, Apple reportedly signed another streaming partner, HBO, over the weekend, according to Recode's Peter Kafka. 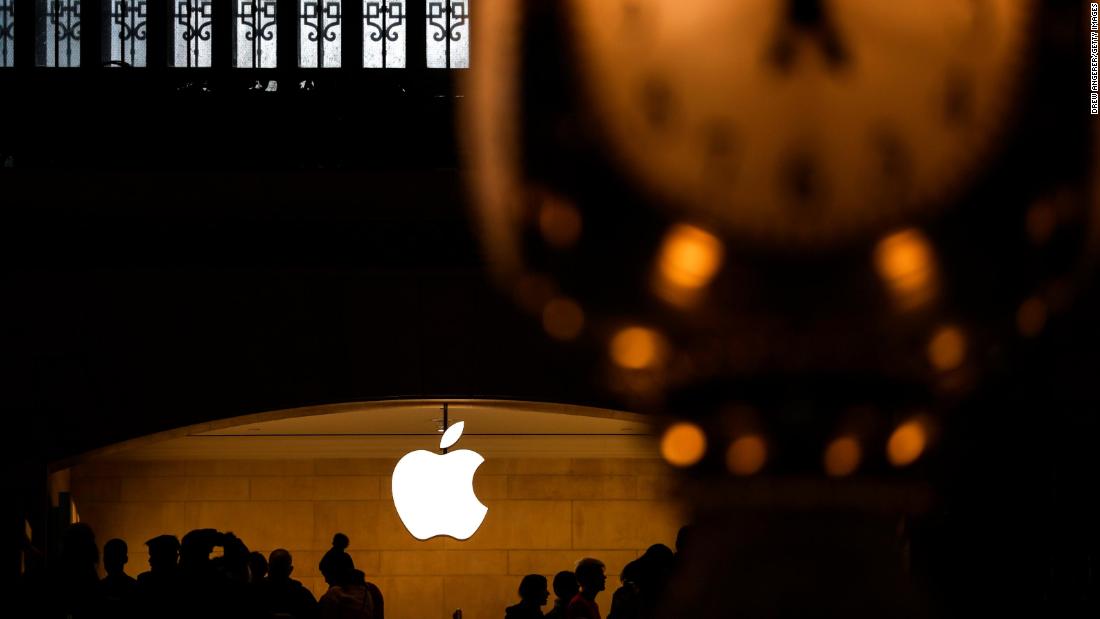 The event hasn't even started, but some people are already disappointed in Apple.

BTIG analyst Walter Piecyk said the event "could trigger a sell-off in the stock," which is typical for Apple events, he said.

"We believe there is little that Apple can say at its event today that will satisfy media skeptics," Piecyk wrote. "Most of today's criticism will probably be accurate but viewed through a short term lens. Content creation is difficult, expensive and 'very different than making phones.'"

Despite today's potential slide, Piecyk is bullish on Apple's stock and raised its year-end price target to $220 per share. It's currently trading at $189 per share.

Apple's (AAPL) stock has rallied 34% since January 2, when it warned investors about sluggish holiday quarter sales because of "lower than anticipated" iPhone sales in China.

The stock is down nearly 2% so far Monday.

Apple switched on its live stream early over the weekend, and viewers scoured the video for hints about Monday's event.

While the live stream looked like it was showing the Steve Jobs Theater live, it was likely a prerecorded video with special effects.

Every once in a while, something was shown on stage. At one point, it looked like actor Chris Evans, who played Captain America, was calling in via FaceTime. There was also an iMessage conversation and a birds-eye view of the Hollywood sign.

Most recently, the screen showed GPS directions and a person eating popcorn alone in the theater. But for the most part, little was happening.

It's not the first time Apple has pulled a stunt. At an event last year, CEO Tim Cook tweeted a confusing message that looked like it was supposed to be a direct message -- but it was a pre-planned joke.

We've covered our share of Apple (AAPL) events, but none like the one in Cupertino on Monday. Tim Cook & Co. are expected to do more than wave new gadgets around.

This one is expected to be about the new Apple, the one that is about services and content: streaming television and film and news.

Let us help you: Send us your questions. Click here and let us know what you want to know. We'll do our best to answer your questions below.

In the room we will have veteran tech journalist Heather Kelly and Brian Stelter (CNN's chief media correspondent), as well as Sandra Gonzalez from CNN Entertainment. They will be joined by two CNN video journalists: Zach Wasser and Gabe Ramirez. A team of editors, writers and producers in New York and Los Angeles, and on Kearny Street in San Francisco, are on the ground to help. 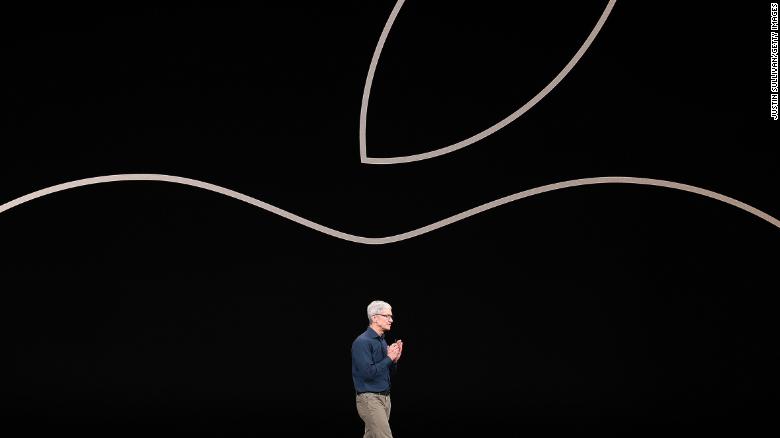 Every major tech and media company thinks it knows how you’ll watch and stream TV in the future. Now, it’s Apple’s turn to predict the next big thing.

This is a big moment for Apple (AAPL). The backbone of its business is built on iPhone sales, but those sales are stagnating. The company has to diversify.

Streaming entertainment is an attractive opportunity. Look at how much influence Netflix (NFLX) has on the media industry: Disney (DIS) and CNN parent company WarnerMedia, among others, are racing to rival that juggernaut.

Apple has been investing heavily in its media business. ITunes and iCloud are a fast-growing revenue source, and the company hopes streaming will follow. Apple was expected to spend about $900 million on original content in 2018, according to an analysis last year from tech venture capital firm Loup Ventures.

Apple's working slate of kids programming is just as exciting as anything from its competitors.

In June 2018, Apple (AAPL) entered into an agreement with the Sesame Workshop to produce multiple series, including live action, animated and puppet-related content.

Then in December, DHX Media, which co-owns the world of the Peanuts gang along with Sony Music Entertainment and the family of Charles M. Schulz, struck its own deal with Apple to produce new series, specials and shorts.

That made it clear that Apple is taking a competitive approach to kids programming.

Streaming competitor Amazon (AMZN) has had a lot of success with kids programming, and even has some Emmy-winners on its roster. And in 2015, HBO put a "Sesame Street" feather in its hat with a five-year deal that gave the premium cable network not only new episodes but 150 archived episodes.