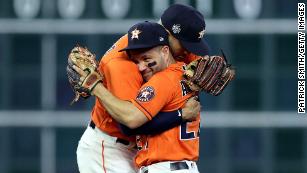 An MLB investigation in late 2019 found that at the start of the 2017 season, employees in the Astros video replay review room started using the live game feed from the center field camera to decode and transmit opposing teams' sign sequences to use when an Astros runner was on second base.

When the sign sequence was decoded, a player in the video replay room would act as a "runner" to pass along the information to the dugout, according to the findings.

A person in the dugout would notify players in the dugout or signal the sign sequence to a runner on second base. That runner would decipher the catcher's sign, and signal to the batter from second base, the investigation found.

Ultimately, the Astros are still recognized as the 2017 champions and no players were disciplined, but the scandal has cast a cloud over the team's sole World Series title.

The Houston Astros face off against the Atlanta Braves tonight in Atlanta for Game 3 of the World Series.

The son of the late Braves legend Hank Aaron threw out the first pitch before the game after Atlanta honored the baseball Hall of Famer with a two-minute tribute.

Aaron, who broke Babe Ruth's all-time home run record in the face of racism and became a revered ambassador to the game, died in January at age 86.

Dodgers manager Dusty Baker, a former Braves teammate of Aaron's, came out and hugged Henry Aaron Jr., and other members of the family.

Hank Aaron Jr.'s pitch was just a little inside and was snagged by Braves first baseman Freddie Freeman, who won the National League version of the 2020 award for best offensive performer that is named in Aaron's honor.

We have our first Tomahawk Chop of the night.

The controversial rallying cry, a staple of Braves games for 30 years, was loudly ringing through Truist Park ahead of the first pitch.

Several advocacy groups and observers have accused the chant of mocking Native American groups and decried it as racist. But many Braves fans, including Georgia Republican Gov. Brian Kemp, have dismissed the criticism, and the stadium was leading the fans in doing the chant.

The Braves organization has not commented in recent days in regard to criticism of the chant, which has been under renewed scrutiny due to the team’s postseason success. Major League Baseball Commissioner Rob Manfred has demurred in offering an opinion on the chant, instead deferring to the Native American community.

Asked before Game 3 about the chant, Astros manager Dusty Baker said, “It’s their thing. They have to solve that.”

“All I know is that I didn't really like that Tomahawk Chop because when they had Fred McGriff and Chipper Jones and those guys, that meant that they were usually right around the corner,” continued Baker, referring to the team’s stars of the mid-90s. “I looked up in the stands one day when I was managing, and my son might have been 4 or 5, and I looked up — no, they had him on the board up there on the Jumbotron, and he was doing the Tomahawk Chop, and I'm like, man — after the game, I'm like, man, what are you doing?”

Braves manager Brian Snitker said before Game 3 that pitcher Charlie Morton, who suffered a fractured right fibula in the third inning of the World Series opener has had surgery to repair the break.

"He had it yesterday, and I think we'll see him here. I think he's coming back this afternoon or tomorrow, I believe," Snitker told reporters. "What I've heard, the expectation is good that he should heal fine and be ready to go in spring training and be well."

Morton had looked good early in Game 1 but took a 102 mph comebacker off the bat of Yuli Gurriel to the shin the second inning. Morton threw 16 pitches to three more batters but stumbled and grimaced while striking out Jose Altuve.

Game 3 of the 2021 World Series shifts to Atlanta on Friday night as the Braves and Astros look to break a 1-1 series tie.

The first pitch is scheduled for 8:09 p.m. ET. The weather forecast calls for temperatures in the high 40s with a chance of rain, and unlike Minute Maid Park, Atlanta’s Truist Park does not have a retractable roof. It's going to be a raw night.

Anderson, who made his MLB debut late last year but didn’t accumulate enough innings to officially lose the “rookie” designation, was a breakout star during last year’s postseason and owns a 1.47 ERA through seven career October starts. Garcia, who was roughed up in his first two postseason appearances this year, rebounded in Game 6 of the American League Championship Series to provide Houston with a strong one-hit performance over 5.2 scoreless innings.

The shift to a National League park means there will be no designated hitter this weekend, possibly for the last time in World Series history. Look for that to be more of a drag on the typically DH-utilizing Astros, who will move Yordan Alvarez to left field and Kyle Tucker over to center as they look to keep their best bats in the lineup at the expense of their defense. The Braves, meanwhile, will sit power hitter Joc Pederson, who has been cold to start the series, in order to keep Jorge Soler’s bat in right field.

Neither of the first two games were particularly close. The Braves quickly pounced on Astros starter Framber Valdez in Game 1 en route to a 6-2 victory, and Houston cruised to a 7-2 triumph the next night.

What else to watch for: Game 3 will also be notable in light of two non-baseball-related controversies: the decision earlier this year by Major League Baseball to move the All-Star Game away from Truist Park in protest over Georgia’s restrictive voting law passed earlier this year, and an ongoing national debate about the appropriateness of Native American imagery by the Braves, including their longtime “Tomahawk Chop” chant.

The Atlanta Braves and Houston Astros will face off tonight in Game 3 of the World Series.

The Astros are appearing in their third World Series in five seasons, having won the 2017 crown but lost the 2019 title to the Washington Nationals in seven games.

If you're planning to tune in for the rest of the best-of-seven series, here's a look at the schedule:

Reporting from CNN's Jack Bantock contributed to this post.