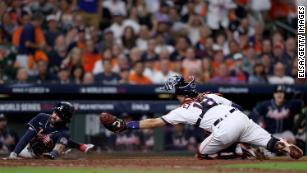 Houston breaks it open against Max Fried in the second.

Kyle Tucker reached on a one-out single then the American League batting champ Yuli Gurriel singled up the middle to advance Tucker to third.

Tucker scored on an infield single by the next man up, Jose Siri.

But then, chaos erupted after Martin Maldonado hit a single to shallow left. Gurriel scored and Siri scored on a throwing error by the Braves.

Michael Brantley drove Maldonado in with a single to right.

Houston up 5-1 after two innings.

Braves catcher Travis d'Arnaud tied the game in the top of the second with a blast over the left field wall.

Houston starter Jose Urquidy has looked good so far with four early strikeouts but d'Arnaud got the best of him with that shot.

We're all square in Houston. Heading to the bottom of the second.

Houston's Jose Altuve led off the bottom of the first with a double off Atlanta left-hander Max Fried.

Michael Brantley advanced Altuve to third with a deep fly to center.

Alex Bregman drove Altuve in with another fly ball to center.

Houston takes its first lead of the series.