Our live coverage has ended. You can read more about today's matches here.

Japan takes a 2-1 lead through Takuma Asano and we are on the verge of another huge World Cup upset.

With just nine minutes of regular time left, Asano leathers the ball past Neuer who can do nothing to prevent another goal.

All the Japanese substitutes rush onto the pitch while the Japanese fans in the stands are all out of their seats for the final minutes of this game.

Germany goalkeeper Manuel Neuer makes a brilliant initial save, but he can only palm the ball back into the danger area and Dōan runs onto it and makes no mistake with the finish.

The entire Japanese bench empties and runs to the corner flag to celebrate with Dōan, who may have just earned Japan a huge point.

It was a moment so brief that the thousands of fans inside the Khalifa International Stadium could easily have missed it. But a moment, the time it took for the photographers amassed in front of the German World Cup team to snap a picture, was all it needed for Germany's national football team to stage a protest.

The starting 11 all posed with their right hands in front of their mouths, and within minutes, the image was circulating widely on social media. As Germany kicked off their World Cup campaign against Japan in group E, the team’s social media feed confirmed that the gesture was designed as a protest to FIFA’s decision to ban the 'OneLove' armband that many European captains had been hoping to wear in Qatar.

“We wanted to use our captains armband to take a stand for values that we hold in the Germany national team: diversity and mutual respect,” the statement read. “Together with other nations, we wanted our voice to be heard. It wasn’t about making a political statement, human rights are non negotiable. Denying the armband is the same as denying us a voice. We stand by our position.”

Germany fan Nick Boettcher told CNN that it was "sad" that FIFA had taken the stance to deny players the opportunity to wear the armband. "FIFA is making a lot of questionable decisions and so it’s good that people speak up. I’m very proud that they did that. People will talk about this for sure, and the attention will grow. The pressure on FIFA and Qatar is definitely increasing."

England fan Samir Cordell told CNN inside that stadium that he was "over the moon" with the protest. "Germany and the German fans should be proud," he said. "I’m an England fan and I didn’t like seeing England not wearing the armband. I would have loved to see Harry Kane wear it and get the booking. I think it’s great, I think it’s fantastic. Hats off to them."

The second half kicks off with Japan looking to equalize or nab the surprise victory and Germany to maintain its lead.

With the World Cup now underway in Qatar, many are wondering how this moment arrived – that a tiny Gulf nation with little footballing history ended up hosting the biggest event the sport has to offer.

Qatar had never previously appeared at a World Cup tournament – let alone staged one – and became the first host nation to lose the opening game of the tournament with a 2-0 defeat against Ecuador on Sunday.

The country’s World Cup debut was 12 years in the making, a period in which Qatar’s host status has stirred controversy within the footballing community and beyond. 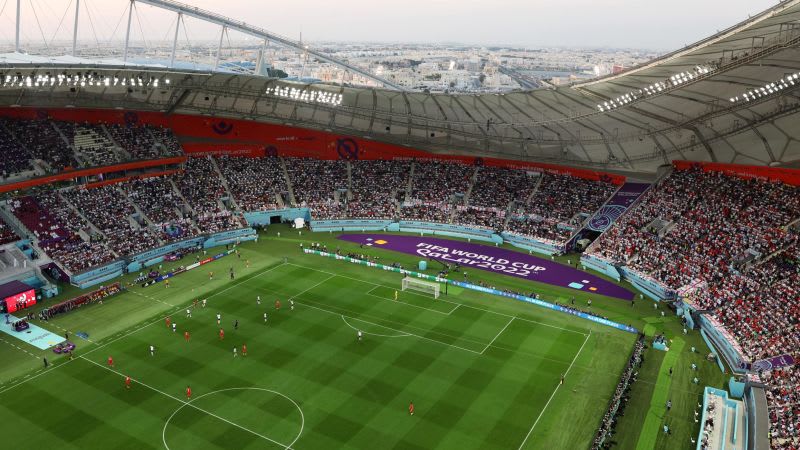 How Qatar ended up hosting the World Cup | CNN

İlkay Gündoğan's penalty is the difference between the sides at the interval.

Japan looked lively in the opening stages and had the ball in the back of the net, but Daizen Maeda's effort was ruled out for offside.

It was a clumsy foul from Japan goalkeeper Shuichi Gonda to concede the penalty after Japan had done well to keep Germany at bay for more than half an hour.

Kai Havertz then looked to have given Germany a 2-0 lead right on half time, but it was eventually ruled out by VAR for offside.

This game is far from over, with Japan still looking dangerous when going forward.

Germany's players placed their hands over their mouths in a pre-game team photo in an act of protest.

Players for the German national team covered their mouths in a team photo taken shortly before their World Cup opening match against Japan in Qatar on Wednesday. The action comes in protest over FIFA's decision to sanction players wearing "OneLove" armbands, meant to promote diversity and inclusion at the World Cup.

Captains from England, Wales, Belgium, the Netherlands, Switzerland, Germany and Denmark had planned to wear OneLove armbands at the Qatar World Cup, before FIFA made it clear on Monday players would be yellow carded.

The German national team's official Twitter account later released a statement, indicating that they had been prevented from using their voices to promote human rights at the World Cup.

"We wanted to use our captain’s armband to take a stand for values that we hold in the Germany national team: diversity and mutual respect," the team's official account tweeted shortly after the game began. "Together with other nations, we wanted our voice to be heard.

"It wasn’t about making a political statement – human rights are non-negotiable. That should be taken for granted, but it still isn’t the case. That’s why this message is so important to us.

"Denying us the armband is the same as denying us a voice. We stand by our position," it added in a threaded tweet.

İlkay Gündoğan gives Germany a lead in the 33rd minute after Japan's goalkeeper Shuichi Gonda conceded a penalty. The midfielder steps up and makes no mistake converting it.

We are underway at the Khalifa International Stadium! Can the opening match of Group E break the streak of goalless draws at this year’s World Cup?