Our live coverage of the championship celebration has ended. Scroll through the posts below to see how it unfolded or keep reading CNN for more. 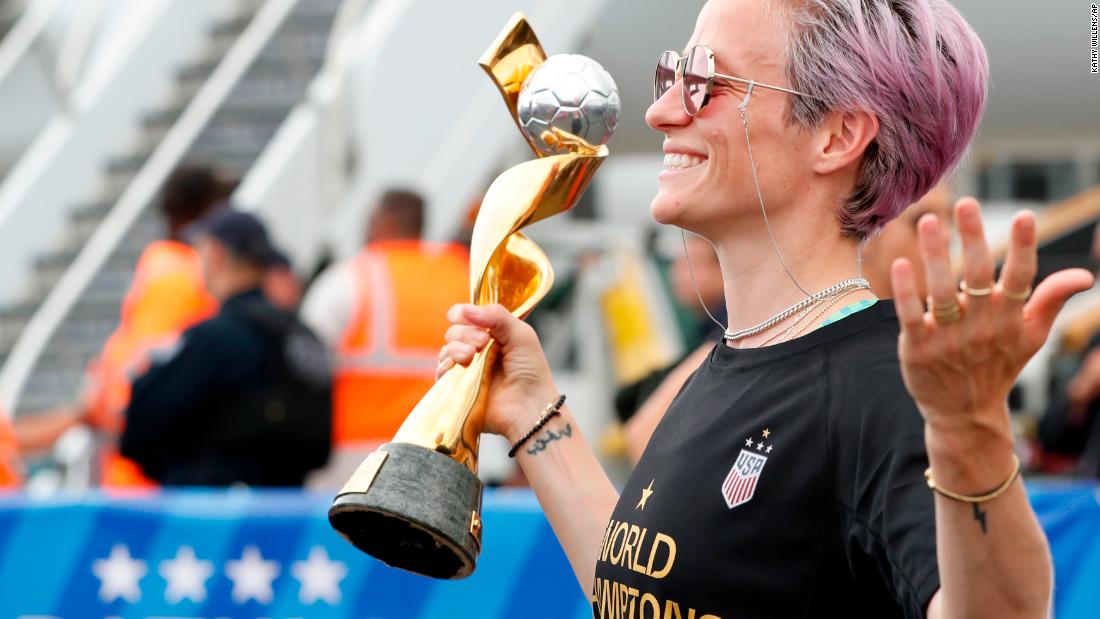 If you missed the US women's championship parade today in New York City, you'll have another chance to see the team again.

The US Women's National Team has announced a five-stop victory lap.

The national team will reunite to face the women of Ireland on August 3 at the Rose Bowl in Pasadena, California, US Soccer announced this week. It'll be the US women's first match since their win.

They'll play four more matches on August 29, September 3, October 3 and October 6. Locations and opponents will be announced at a later date.

The national team has missed at least two months of the National Women's Soccer League season. So, it's unclear which players will return for the victory tour. The league's regular season ends in mid-October. 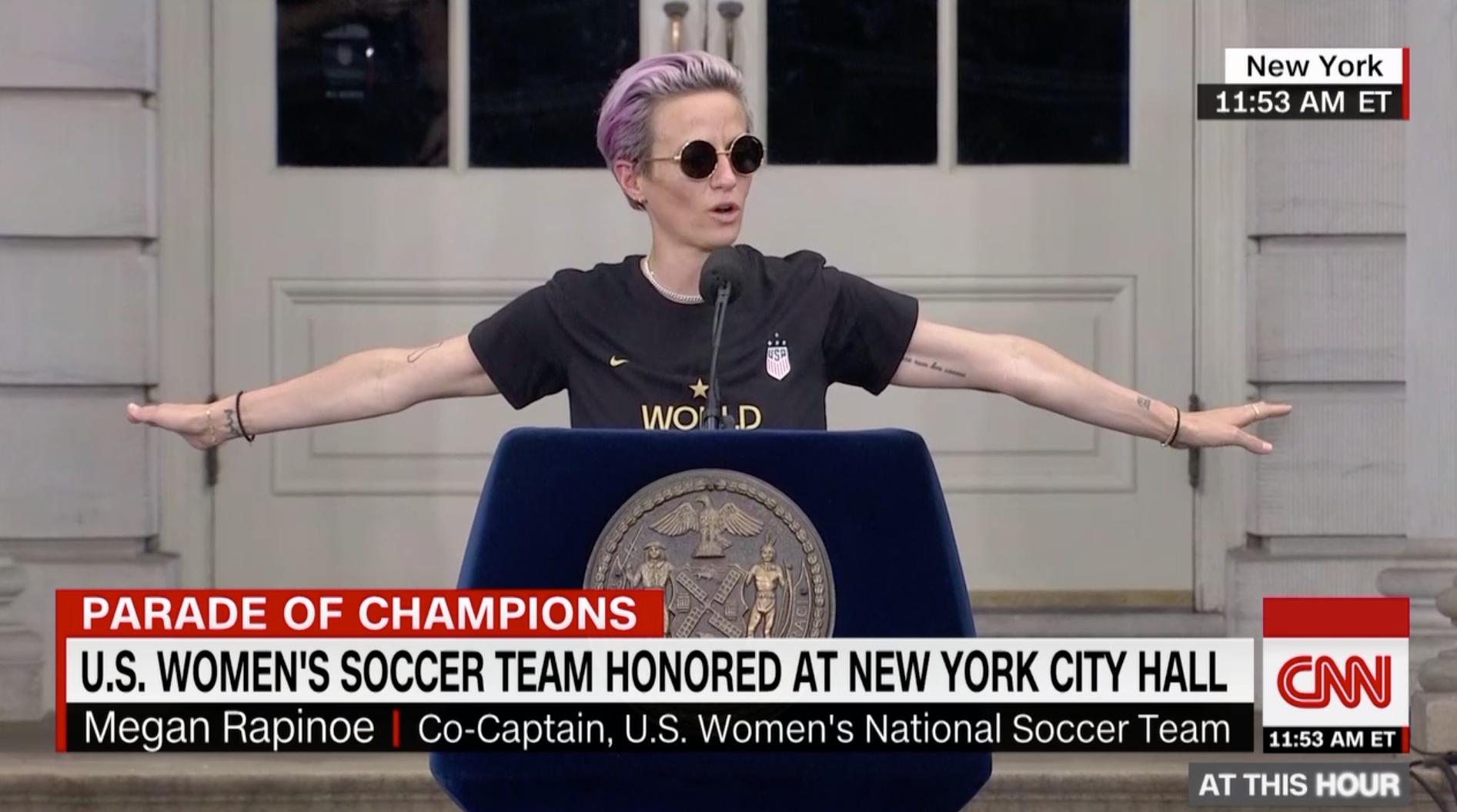 US women's soccer star Megan Rapinoe gave a powerful speech during the ceremony at New York City Hall. She said the team is using its platform to "love more, hate less."

She continued calling for fans to think of how they they can make their community better and urging people to "be more" and "be bigger than you've ever been before."

Here's what else Rapinoe said during the ceremony:

"You're more than a fan. You're more than someone who just supports sports. You're more than someone who tunes in every four years. You're someone who walks these streets every single day. You interact with your community every single day. How do you make your community better? How do you make the people around you better? Your family? Your closest friends, the 10 closest people to you, the 20 closest people to you, the most… hundred closest people to you?
It's every single person's responsibility. There's been so much contention in these last years. I’ve been a victim of that. I’ve been a perpetrator of that. With our fight with the federation: I’m sorry for some of the things I’ve said, not all of the things. But it's time to come together. This conversation is at the next step. We have to collaborate. It takes everybody. This is my charge to everybody. Do what you can. Do what you have to do. Step outside yourself. Be more. Be better. Be bigger than you've ever been before.
If this team is any representation of what you can be when you do that, please take this as an example."

Listen to the whole thing: 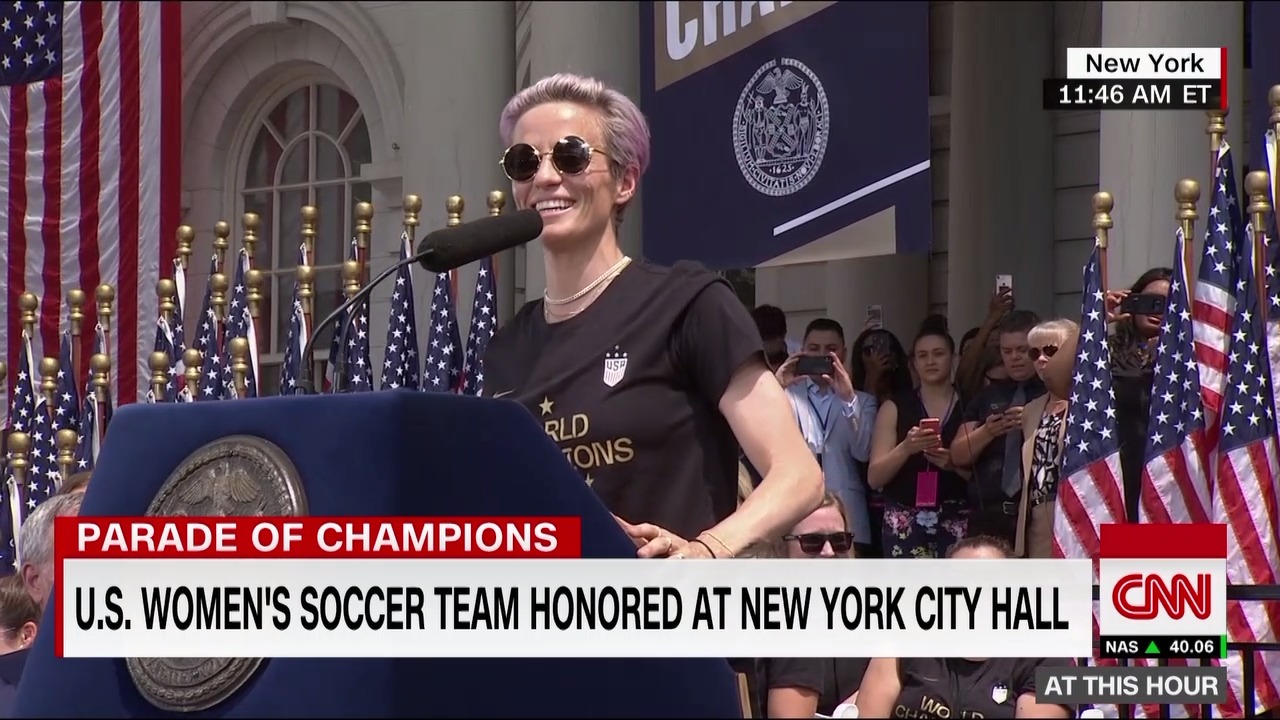 Megan Rapino, one of the captains of the US women's soccer team, has heard some fans' requests that she run for US president — and she's not interested.

"It's my absolute honor to lead this team out on the field. There's no other place that I would rather be, even in the presidential race," she said. "I'm busy, I'm sorry."

During the parade earlier today, many fans held up signs that read "Rapinoe for President." Rapinoe — who has described herself as a "walking protest" — has been politically outspoken, specifically against President Trump.

Earlier this year, she asserted that she would not be "going to the f*****g White House" if the women's team won the World Cup. Last night, she also shared her message to President Trump. 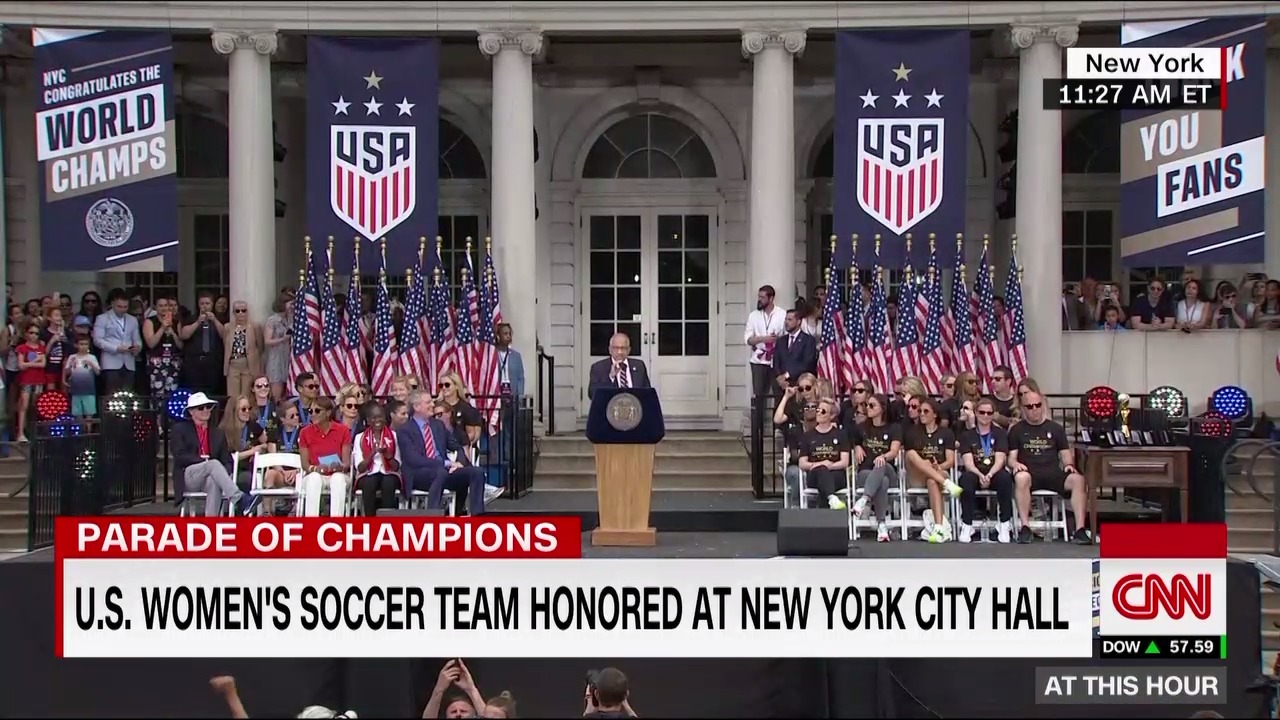 Carlos Cordeiro, president of the US Soccer Federation, was speaking on stage at the New York City Hall ceremony honoring the US women's soccer team when the crowd erupted into chants of "equal pay."

"US Soccer has invested more in women's soccer than any country in the world. And we will continue to invest—" he began before the chants started.

"We will continue to invest more in women's soccer than any country in the world," he continued. "We believe at US Soccer that all female athletes deserve fair and equitable pay."

Some context: Several players have filed a lawsuit against the US Soccer Federation, claiming they deserve to be paid what the American men are paid for their international performances. 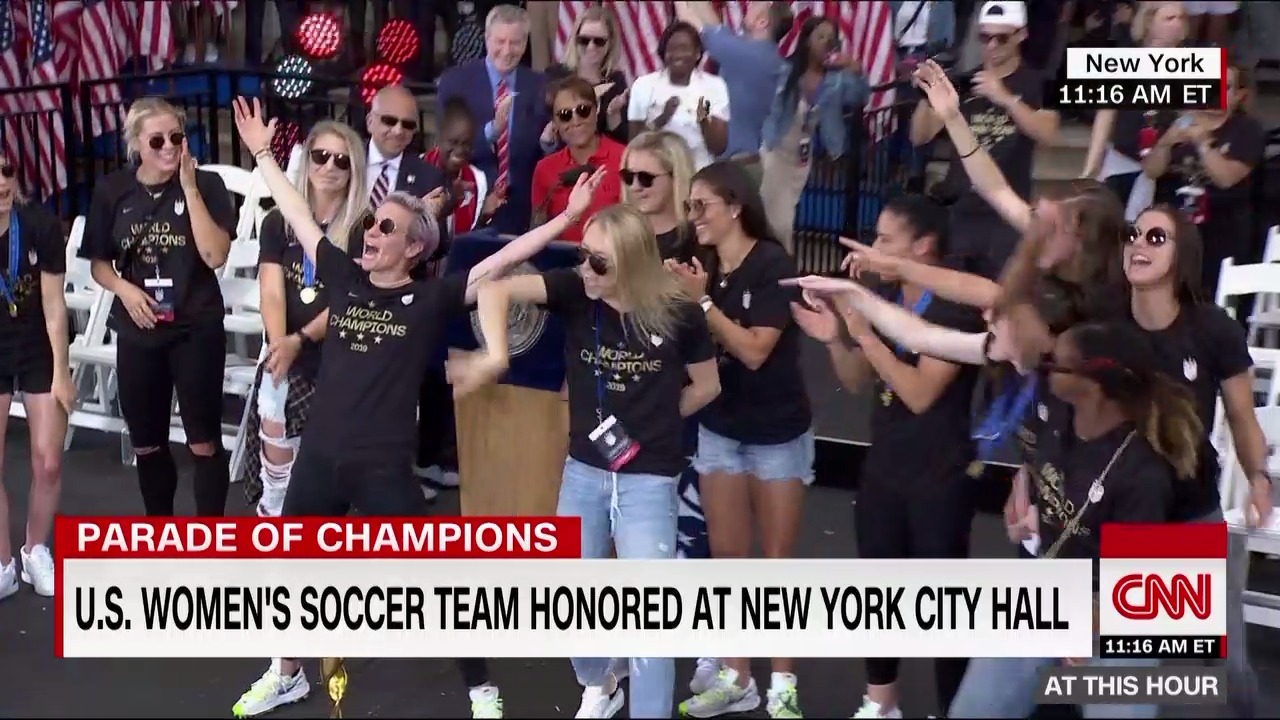 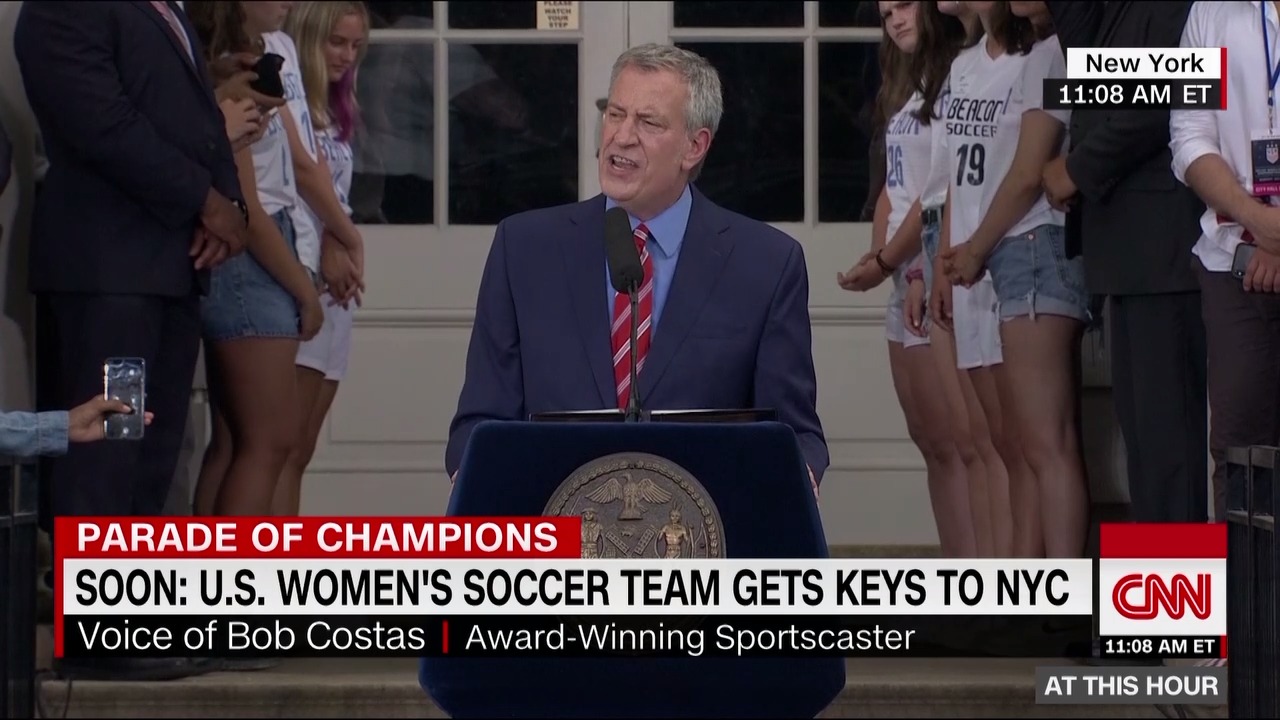