Attorney General William Barr pushed back on characterizations that he has politicized the Justice Department to defend President Trump, asking rhetorically, “Could you point to one indictment that has been under the department that you feel is unmerited?”

Addressing his involvement in the prosecutions of Roger Stone and Michael Flynn, Barr said they were “both cases where I determined that some intervention was necessary to rectify the rule of law, to make sure people are treated the same.”

He raised his voice as he criticized line prosecutors who had attempted to seek a stiff prison sentence for Stone, reiterating that he felt Stone should go to jail, but not for an unfair amount of time.

“I agree the President’s friends don’t deserve special breaks, but they also don’t deserve to be treated more harshly than other people and sometimes that’s a difficult decision to make, especially when you know you're going to be castigated for it,” Barr said.

In his opening statement, Rep. Jim Jordan, the top Republican on the House Judiciary Committee, said Democrats were targeting Barr because he had been unafraid to characterize the Russia probe as "spying" on the President's campaign.

"He had the courage to do what no one else would do at the Justice Department," Jordan said, adding, "Chris Wray sure as heck isn't going to do it," a dig at the current FBI director.

In his opening remarks, Attorney General William Barr defended his "independent judgment" and said President Trump "has not attempted to interfere" in the criminal decisions he's made. Barr said he feels he has "complete freedom" to do "what is right"

"As I said in my confirmation hearing, the attorney general has a unique obligation. He holds and entrusts the fair administration of the administration of justice. He must ensure that there is one standard of justice that applies to everyone equally and that criminal cases are handled even handedly based on the law and the facts and without regard to political or personal considerations, and I can tell you that I have handled criminal matters that have come to me for decision in this way," Barr said.

"The President has not attempted to interfere in these decisions. On the contrary, he has told me from the start that he expects me to exercise my independent judgment, to make whatever call I think is right, and that's precisely what I've done," Barr continued.

Attorney General William Barr's opening statement before the House Judiciary Committee hit on a number of Justice Department-related issues, but a large portion was devoted to issues of race and policing.

In his opening remarks, Barr struck a tone that was decidedly defensive of law enforcement.

Barr called the killing of George Floyd "horrible" and said it "understandably jarred" the nation. Floyd's death at the hands of a Minneapolis police officer has sparked nationwide anti-racist protests and many calls to defund police departments.

"In the wake of George Floyd's death violent rioters and anarchists have hijacked legitimate protests to wreak senseless havoc and destruction on innocent victims," Barr said.

"The demonization of the police is not only unfair and inconsistent with principles of all people should be treated as individuals, but gravely injurious to the inner city communities," he said.

Following the video, Committee Chair Jerry Nadler noted that Republicans did not give the committee the required 48-hour notice for video elements.

"I hope that Mr. Jordan never complains about the length of my opening statement," Nadler said. "I am going to insert the committee's audio-visual policy into the record of this hearing and note that the minority did not give the committee the 48 hour notice required by that policy."

The lengthy video started with clips of television news reporters describing "peaceful protesters." It was followed by scenes of protesters and police clashing.

While numerous anti-racist protests broke out after the killing of George Floyd, it's not clear where or when the videos in the GOP montage were taken.

In his opening remarks, House Judiciary Chair Rep. Jerry Nadler said Attorney General William Barr has failed to uphold central missions of the agency, including being an impartial administrator of the law and enforcing civil rights laws.

"Your tenure has been marked by a persistent war against the department's professional core in an apparent attempt to secure favors for the President," Nadler said. "Others have lost sight of the importance of civil rights laws, but now we see the full force of the federal government brought to bear against citizens demonstrating for the advancement of their own civil rights."

"There is no precedent for the Department of Justice to actively seek out conflict with American citizens under such flimsy pretext or for such petty purposes," Nadler continued.

Nadler added that Barr has "aided and abetted the worst failings of the President."

"In the hands of President Trump, a Department of Justice that adopts a dangerously expansive view of executive power and demonstrates a willingness to shield him from accountability, represents a direct threat to the liberty and safety of the country," Nadler said.

Leading up to today's hearing, Nadler has been investigating several of Barr's actions and had threatened to subpoena the attorney general before they agreed on Tuesday's appearance.

Last month, after Trump had Barr fire the US attorney in Manhattan who had been overseeing an investigation into the President's personal lawyer Rudy Giuliani, Nadler suggested that his committee might attempt to impeach Barr, though he also called pursuing it a "waste of time" and House Speaker Nancy Pelosi has tamped down talk of impeachment.

Attorney General William Barr is appearing before House lawmakers in a long-awaited showdown between congressional Democrats and one of the President's most effective enforcers.

Tuesday's appearance on Capitol Hill is Barr's first before the House Judiciary Committee, where the panel's Democrats have accused Barr of a litany of offenses and raised the specter of impeachment.

These are some key topics Democrats are expected to grill Barr on: 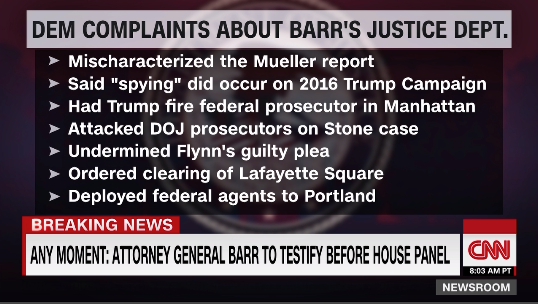 Attorney General William Barr will testify soon before the House Judiciary Committee in a hearing titled "Oversight of the Department of Justice."

It will be the first time Barr appears before this Democratic-led panel. He is the hearing's only witness.

The committee's chair Rep. Jerry Nadler, a Democrat from New York, and the Republican ranking member Rep. Jim Jordan are expected to deliver opening remarks. After Barr's opening statement, committee members will have one round of 5-minute questioning.

Nadler was involved in a car accident this morning on his way down to Washington for today’s hearing and the panel was delayed. It was originally set to begin at 10:00 a.m. ET. Nadler, who was not driving, was not hurt in the accident, a spokesperson said.

Democrats on the House Judiciary Committee have long been angling for Barr to appear before them after a no-show last year and previous dates this year were scuttled by the coronavirus pandemic.

With reporting from CNN's Jeremy Herb and David Shortell

Attorney General Bill Barr just arrived at the US Capitol ahead of his testimony before the House Judiciary Committee.

Barr was wearing a black face mask as he walked through the building.

The hearing is set to begin at 10:45 a.m. ET. The Democratic-led committee is expected to grill Barr on a number of episodes lawmakers say raise concerns about the agency's independence and point to an abuse of power.