Our live coverage of the White House press briefing has ended. Scroll through the posts below to see how it unfolded or visit CNN Politics.

"I'm not going to get ahead of the President's meeting and I hope it goes well,” Sanders told reporters at a briefing, amid reports the administration is poised to launch a third round of tariffs on $267 billion of goods in early December.

“We’ll see what happens,” said Sanders. “We’re not going to get head of those conversations.”

Why this matters: The administration has already imposed 25% tariffs on $50 billion worth of Chinese goods. Trump has said the tariffs are necessary to punish Beijing for what he says are its unfair trade practices and intellectual property theft.

China, which has accused the United States of trade bullying, has matched the tariffs dollar for dollar.

Many American business owners say the tariffs are hurting their companies. They have to decide whether to pay the tariff on an imported good or find a new supplier outside China. 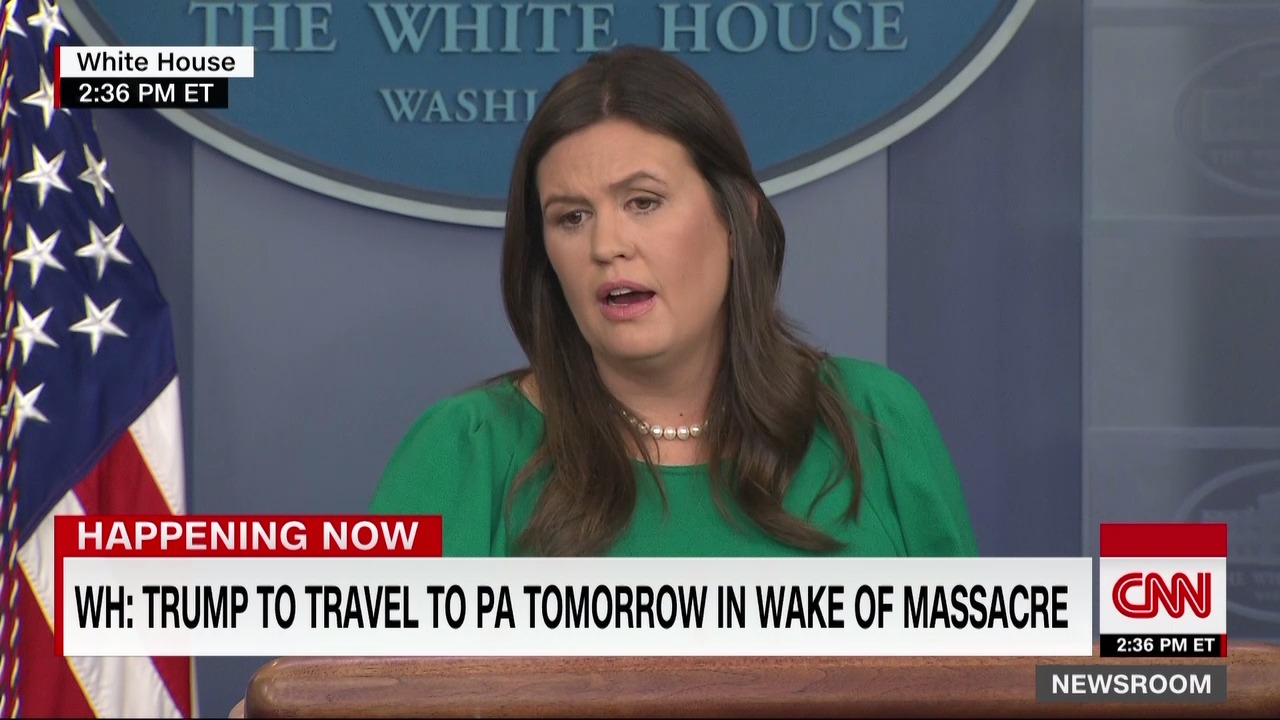 White House press secretary Sarah Sanders was asked Monday what the administration plans to do in response to the killing of Saudi journalist Jamal Khashoggi.

Sanders reiterated that President Trump met last week with CIA Director Gina Haspel, who traveled to Turkey. She said intelligence has been gathered, and the administration is now “weighing different options."

“The administration is considering what action we’ll take moving forward based on that information and the briefing that the President received last week,” she said.

When asked if Haspel had heard the audio tape that Turkish officials claim is proof of the murder, Sanders declined to confirm or deny the specifics of the intelligence Haspel received.

White House press secretary Sarah Sanders declined to name any members of the “fake news media” on Monday, following a tweet from President Trump that called the “Fake News Media” the "true enemy of the people."

Asked by Jim Acosta whether CNN falls into that category, she also wouldn’t say.

Here's how the whole exchange went down:

Acosta: "Shouldn't you reserve the term 'enemy' for people who are actually the enemy of the United States, rather than journalists?"

Sanders: "The President's not referencing all media. He's talking about the growing amount of fake news that exists in the country, and the President's calling that out."

Sanders: "I'm not going to walk through a list, but I think those individuals probably know who they are."

Acosta: "Would that include my outlet, which received bombs last week?"

Sanders: "I don't think it's necessarily specific to a general, broad generalization of a full outlet at times. I think there's individuals that the President would be referencing." 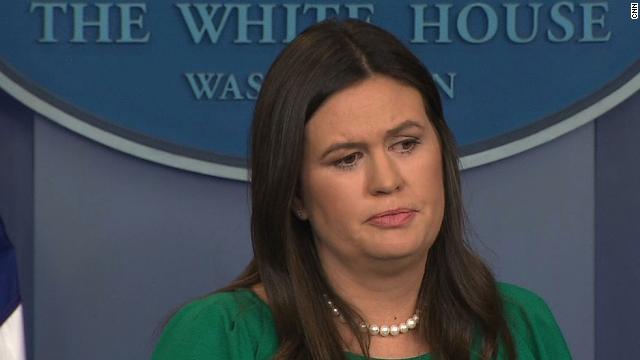 White House press secretary Sarah Sanders confirmed that the White House is considering “administrative actions” to address the asylum issue that has gained attention amid the latest migrant caravan.

“There are a lot of options that are being discussed right now. One priority is looking for ways to secure our borders. We’d love for Democrats in Congress to step up and do their jobs and help us do that,” she said.

Sanders continued: "If they don’t and they’re unwilling to as they have shown in the past that they are, then we’re looking at administrative actions that will help and allow us to do so.”

She added later that there are several options on the table regarding the asylum issue.

Sanders also said she does not know if the President will offer a speech on immigration this week.

Some background: Aides have floated a potential executive order aimed at restricting migrants in the caravan, the source close to the White House said.

It would rely on the same legal rationale as the travel ban issued early in the administration against some Muslim-majority countries to allow immediate repatriation of Central American migrants. The order could prevent those migrants from seeking asylum and entering the United States if they reach the border, but the source said aides are still "trying to figure out the best way to write it" so the order can withstand court challenges.

One of the plans under consideration is some kind of presidential order to deal with asylum seekers. The plan is still under active consideration and has not been finalized, the aide said.

Asked to comment on whether the midterm elections are a referendum on President Trump, White House press secretary Sarah Sanders wouldn’t say.

“I can’t get into specifics that will impact the election, but I can tell you that the President wants to see more people that support his policies elected than not,” she said at Monday’s press briefing.

The President has said at several of his recent rallies that the midterms are a referendum on his presidency. 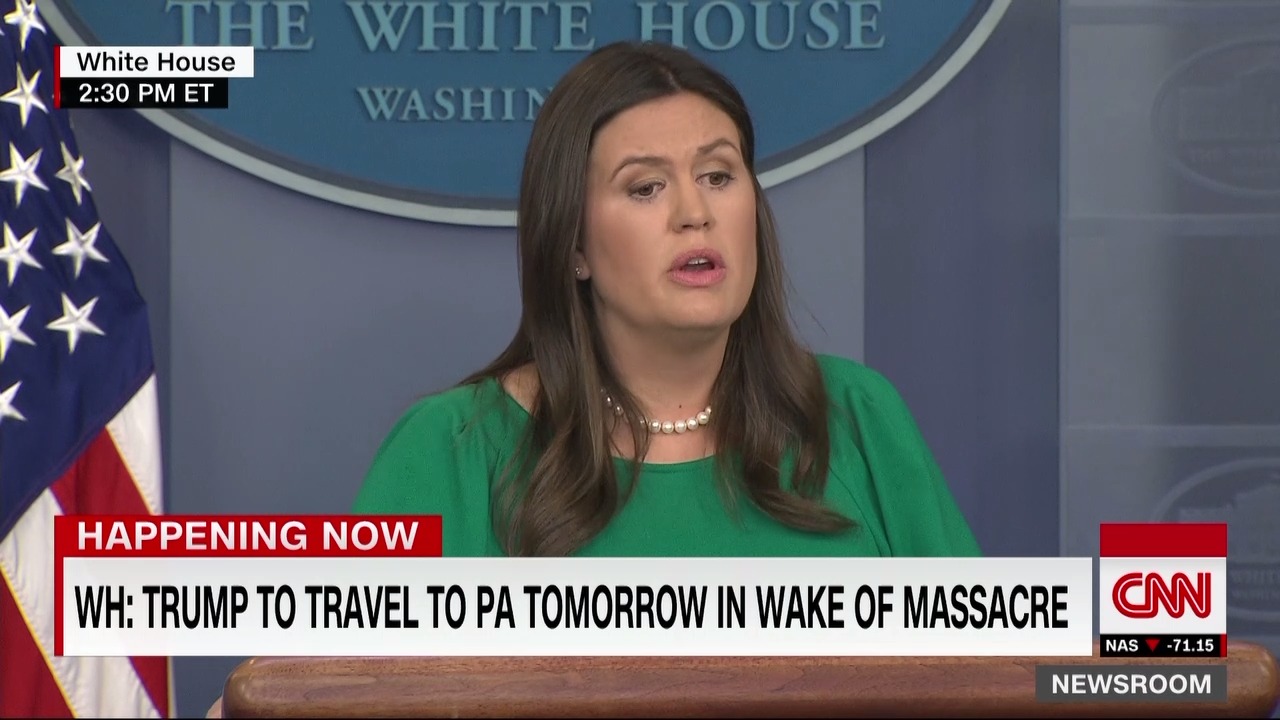 When asked about President Trump's recent remark that he could "tone up" his rhetoric, White House press secretary Sarah Sanders asserted that Trump wanted to "find ways to bring our country together, and we've seen him do exactly that."

Trump's rhetoric was nothing more than highlighting "the difference between the two parties" in the face of the approaching midterm elections, Sanders added.

When pressed further about the Trump's attacks on the media and about the mail bomb suspect's support for Trump, Sanders grew heated.

"The only person responsible for carrying out either of these heinous acts were the individuals who carried them out," she added.

Several Jewish leaders have said President Trump is not welcome in Pittsburgh, where 11 people were killed while worshipping at a synagogue

“The President has denounced racism, hatred, and bigotry in all forms on a number of occasions,” she said, noting that the administration will “continue to do that.”

Sanders also said that the President wants to go to Pittsburgh to “show support,” adding that the Tree of Life Rabbi “said that he is welcome” there, despite calls from some groups for him not to travel to Pittsburgh.

"This atrocity was a chilling act of mass murder, it was an act of hatred, and above all, it was an act of evil. Anti-semitism is a plague to humanity and it is responsible for many of the worst horrors in human history," Sanders said.

Sanders announced that President Trump will travel to Pennsylvania tomorrow to grieve with the community.

She also mentioned the President's own personal ties to the Jewish American community.

"He adores jewish Americans as part of his own family. The President is the grandfather of several Jewish grandchildren. His daughter is a Jewish American and his son-in-law is a descendant of Holocaust survivors," Sanders said.