Our live coverage of the White House press briefing has concluded. For more, visit CNN Politics. 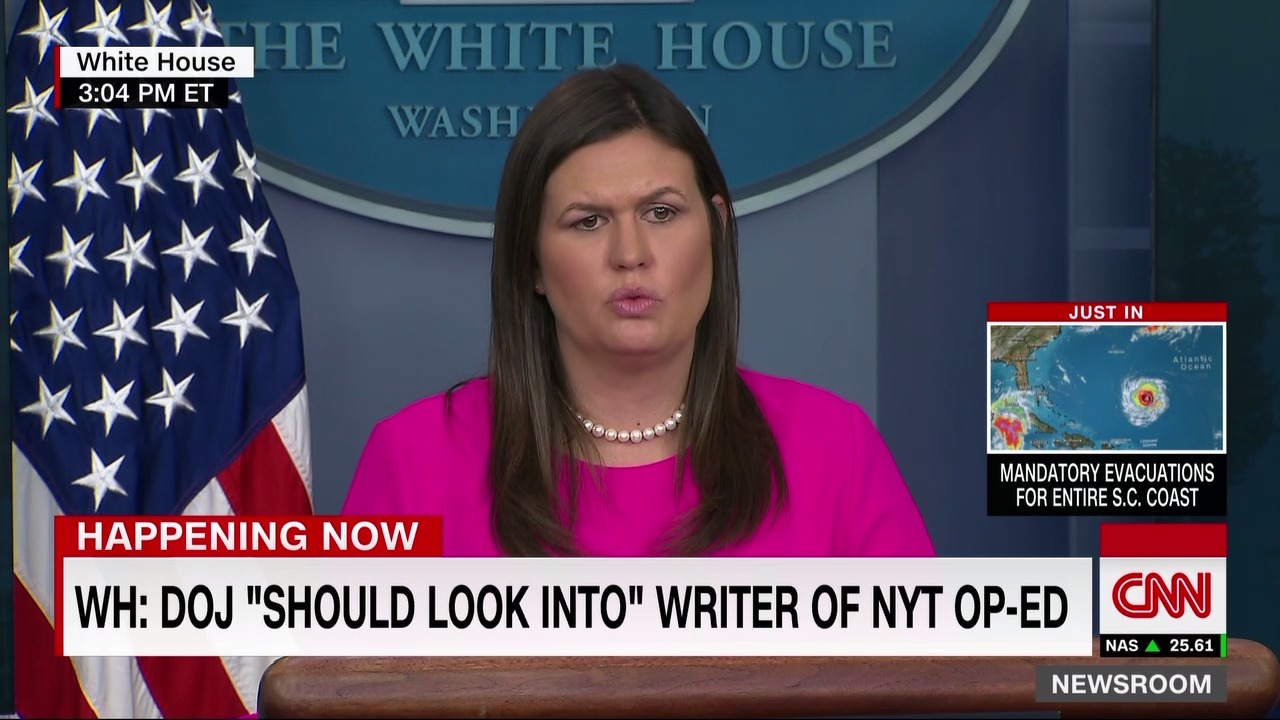 Sarah Sanders dismissed as "ridiculous" reported conversations among administration officials about triggering the 25th Amendment to relieve President Trump of his duties.

"The fact that that's actually being honestly discussed is ridiculous. And frankly, it's insulting to the nearly 62 million people that came out and overwhelmingly supported this president, voted for him, supported his agenda, and are watching and cheering on," Sanders said.

The conversations, which have been whispered about for months, emerged again in an anonymous op-ed published in the New York Times last week.

"No lie detectors are being used, or talked about, or looked at as a possibility," Sander said, adding that White House staff were "focused on doing our jobs" and not "deal with cowards that refuse to put their names in an anonymous letter."

Why we're talking about lie detectors: Last week, Sen. Rand Paul told reporters that he believes anyone with a security clearance who works at the White House should undergo a lie detector test to figure out who wrote it. Then on Sunday, on Fox News, Vice President Mike Pence said he would take a lie detector test to prove that he wasn't the author.

White House press secretary Sarah Sanders described the latest letter from Kim Jong Un to President Trump as “very warm” and “very positive,” noting that the White House will not release the letter unless Kim agrees.

The primary intent of the letter, she said at Monday’s briefing, was to “request and look to schedule another meeting” between the two leaders, something the White House is “open to.”

She said that the White House is “already in the process of coordinating” another meeting, but declined to provide further details on a time or location.

She cited the letter as “further evidence of progress” toward denuclearization, noting that the latest parade was “not about their nuclear arsenal.”

The letter, she said, showed a “commitment to continuing conversations.” 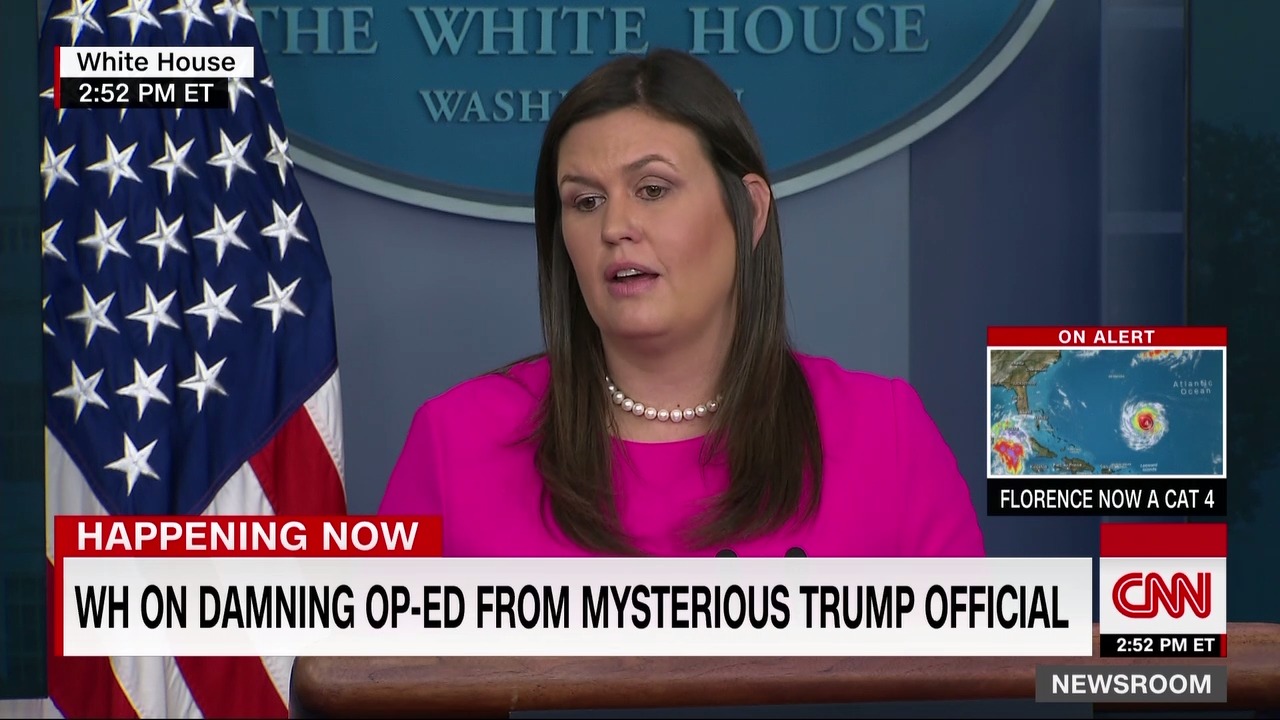 White House press secretary Sarah Sanders reiterated President Trump's comments made on Air Force One last week when the President said Attorney General Jeff Sessions should investigate and uncover the identity of the senior administration official who penned an anonymous op-ed in The New York Times.

"Certainly, if there's an individual, whether or not, since we don't know who they are, if that individual is in meetings that were national security is being discussed or other important topics and they are attempting to undermine the executive branch, that would certainly be problematic and something that the Department of Justice should look into," Sanders said.

Asked if that would be a suggestion of misuse of classified information, Sanders said, "Once again, it's something that the department of justice should simply look into and that's for them to make that determination."

He will be speaking with Homeland Security Secretary Kirstjen Nielsen and FEMA Administrator Brock Long, she said.

The White House, she added, has been in contact with local authorities affected by the incoming storms.

"These tropical storms and hurricanes are very dangerous and we encourage anyone in the path to heed the warnings of state and local officials who have the expertise and knowledge of their communities to provide the best on-ground information."

Council of Economic Advisers Chairman Kevin Hassett suggested that blamed "somebody" for "adding a zero" in economic numbers that made their way to President Trump, who incorrectly claimed in a tweet this morning that the GDP rate is higher than the unemployment rate for the fist time in 100 years.

"I don't know the whole chain of command," Hassett offered, "but what is true is that it's the highest in 10 years. And at some point, somebody probably conveyed it to him, adding a zero to that, and they shouldn't have done that."

The first two numbers are correct, although they measure completely different things, and in different ways.

The overall US economy grew at a 4.2% annual rate in the second quarter. Unemployment was between 3.8% and 4% during the quarter, and it came in at 3.9% in August.

"It's definitely better when it's true than when it's not," said Justin Wolfers, professor of economics at University of Michigan. "I like high GDP growth and low unemployment."

But Trump got it wrong — way wrong — when he said it hasn't happened in a century.

Kevin Hassett, the chairman of the Council of Economic Advisers, kicked off today’s White House press briefing with a rebuke of President Obama’s speech last week taking credit for the economic numbers filled with slides and statistics and a few calculus jokes.

Hassett was asked specifically whether his appearance at the first briefing in 19 days was in response to Obama’s speech.

He said it was “not in any way” related to the timing of the former President’s remarks.

Asked whether he would give credit to Obama for economic growth, he declined to say.

“I prefer to give blame or credit to policies than individuals,” he said, noting that it was “not fair” that Obama was criticized for the great recession which started before his term.

He added that Obama had a “whole bunch of policies that were very negative for growth,” citing the Affordable Care Act, among others.

A Category 4 hurricane is barreling towards the Eastern United States, but the White House today decided to start the first press briefing in almost three weeks by talking about the economy.

It sent out a "fact sheet" on economic progress since the President took office with one clear argument: This economic growth is President Trump's, not President Obama's.