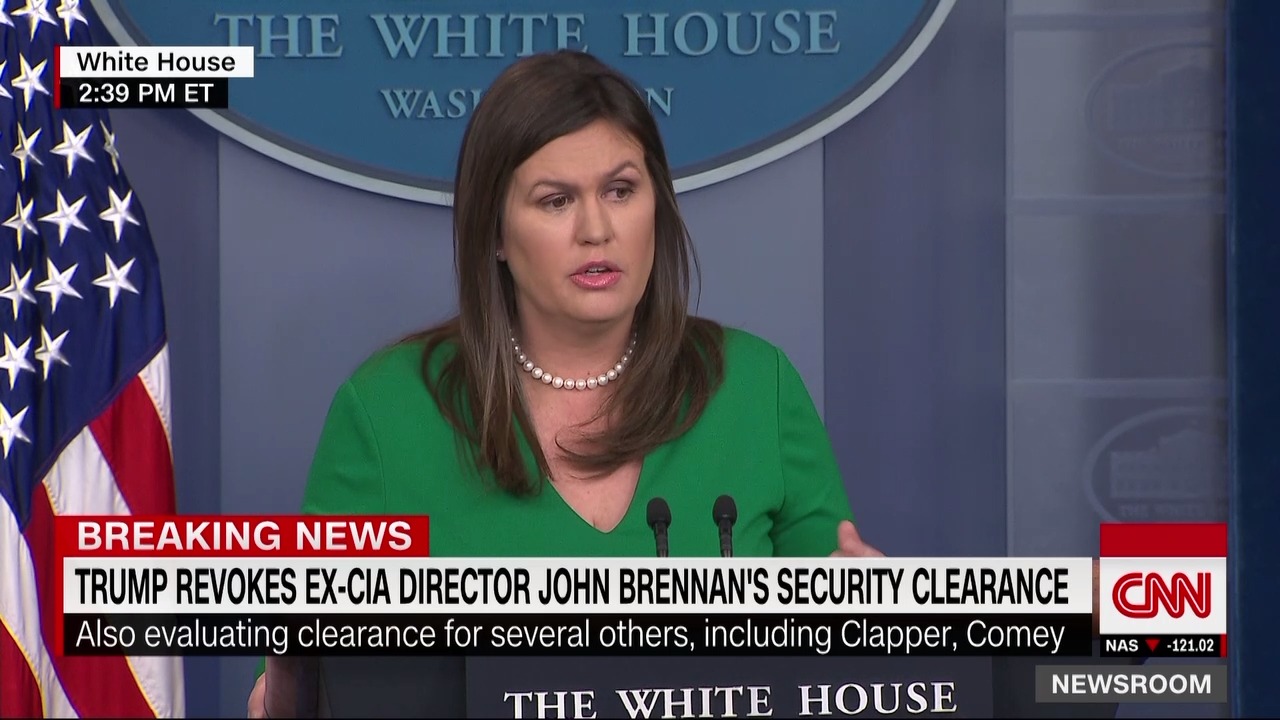 These are the people he's looking into:

Asked by a reporter if today's announcement was simply the President getting back at his critics and penalizing them for being critical on television, Sanders said, "Not at all."

"The President has a constitutional responsibility to protect classified information, and who has access to it. And that's what he is doing, is fulfilling that responsibility and this action. This is actually specific to Mr. Brennan, and the others are currently under review," she said.

"First, at this point in my administration, any benefits that senior officials might glean from consultations with Mr. Brennan are now outweighed by the risks posed by his erratic conduct and behavior," Trump claimed.

"Second, that conduct and behavior has tested and far exceeded the limits of any professional courtesy that may have been due to him. Mr. Brennan has a history that calls into question his objectivity and credibility."

One specific example Trump cited in his announcement, according to Sarah Sanders, was the CIA's infiltration of Senate computers during Brennan's time at the helm of the CIA.

Brennan has “recently leveraged his status” as a former official to “make a series of unfounded allegations” about the administrations, which she called “increasingly frenzied commentary.”

She continued, “Such access is particularly inappropriate when such officials have transitioned into highly political positions. 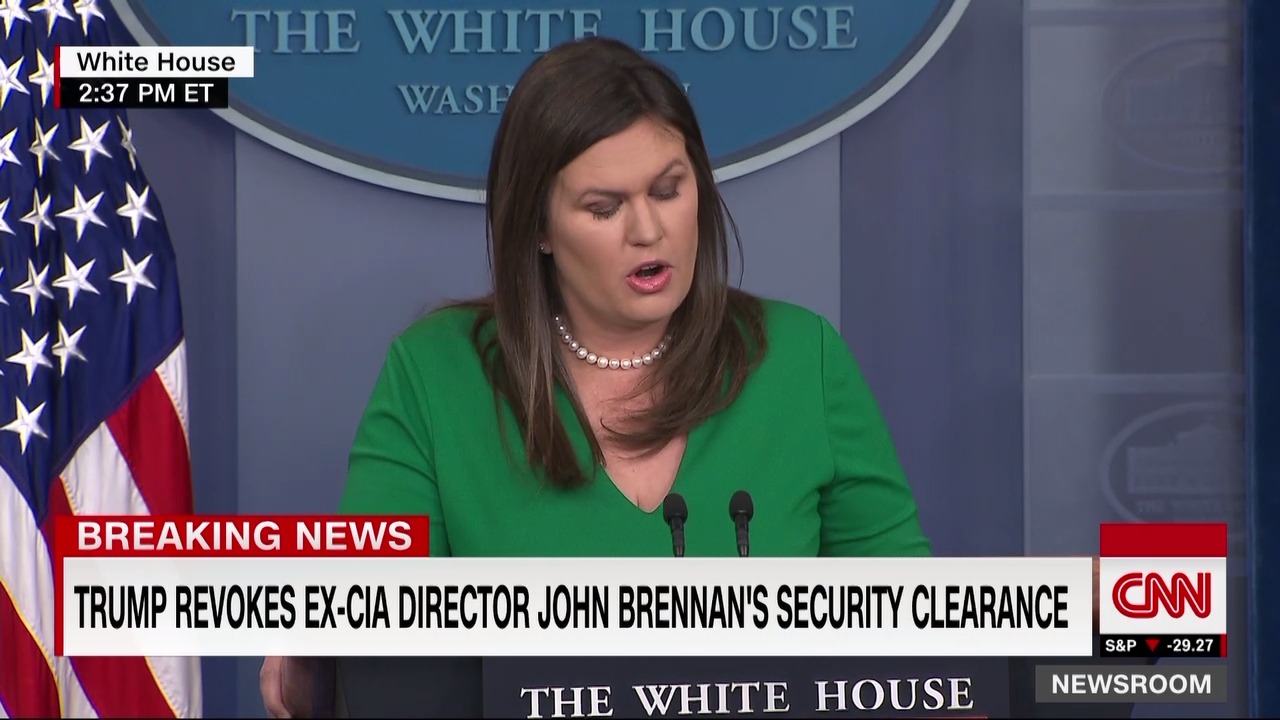 Sanders, reading from a letter written by Trump, said:

As the head of the executive branch and commander-in-chief, I have a unique constitutional responsibility to protect the nation's classified information. Including by controlling access to it. Today in fulfilling that responsibility, I've decided to revoke the security clearance of John Brennan, former director of the Central Intelligence Agency. 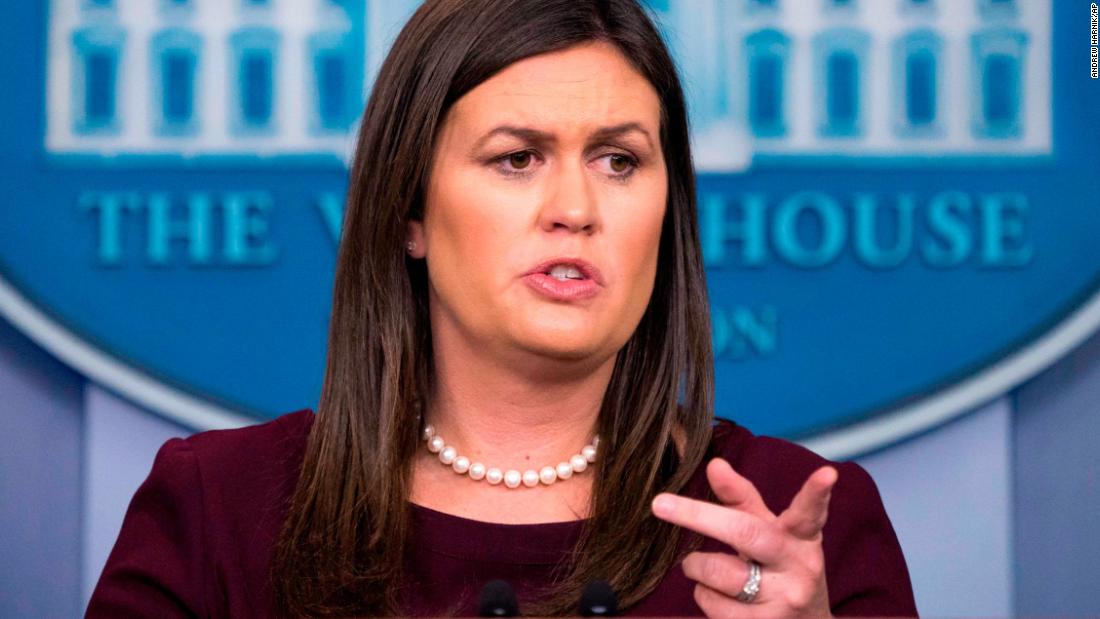 Sarah Sanders' Tuesday press briefing opened as she planned, with defense officials discussing the possible repatriated remains of unnamed US troops killed during the Korean War. But it quickly went sideways.

First, the White House press secretary was asked about President Trump’s language on Twitter calling Omarosa Manigault Newman a “crazed, crying lowlife” and a "dog." She sought to defend the President, claiming he was “voicing frustration." Sanders added it had "nothing to do with race and everything to do with the President calling out someone’s lack of integrity."

She was then pressed specifically on whether any recording of the President using the n-word exists. Sanders said: “I can’t guarantee anything," before adding Trump has already addressed the question.

During the briefing, as Sanders sought to defend the President's record on race, she then incorrectly claimed Trump has already tripled Obama's record over eight years for creating jobs for black workers. She later issued a rare correction and apologized.