Our live coverage has ended. Scroll through the posts below to see how today's White House press briefing unfolded.

When Sarah Sanders was asked what advice she would give to federal workers who are worried about another shutdown told reporters: "My advice would be to call your Democrat members of Congress and ask them to fix the problem."

Sanders was also challenged on whether or not the border is an emergency or half an emergency, since President Trump has yet to declare it. Sanders told reporters they were missing the point.

"It's not just an emergency. It's a crisis at the border," she said.

The press secretary added that the administration still believes the best fix would be to do it legislatively and that Trump wants to "exhaust" all other options. 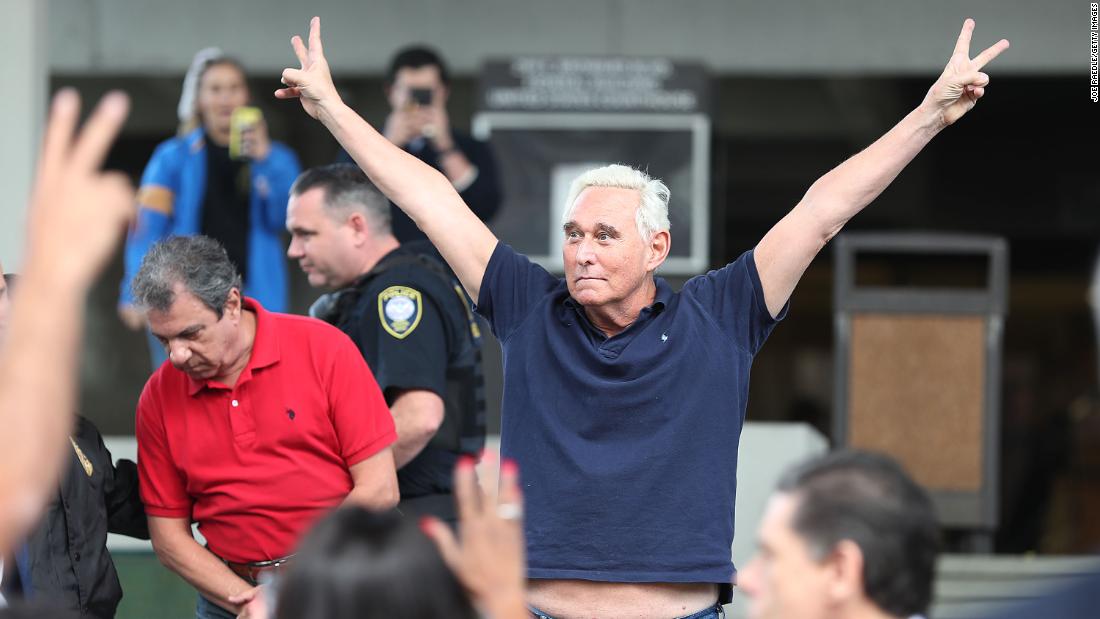 White House press secretary Sarah Sanders was just asked if President Trump has ruled out a pardon for Roger Stone, his longtime associate who was was indicted last week on charges brought by special counsel Robert Mueller.

“I’m not aware of that. I haven’t had any conversations regrading that matter.”

A reporter followed up, asking Sanders if she planned discuss the possible pardon with the President.

“I’m not going to get into that at this point, but if need be, I’ll let you know," she said.

Later, she repeated that she's unaware of any talk about pardons: "Again, I’m not aware of a conversation regarding that or a need for it."

She also said that Stone's indictment has "nothing to do with the President."

"So in fact, I think the further we get into the process, the more and more we see that this has nothing to do with President Trump," she said. 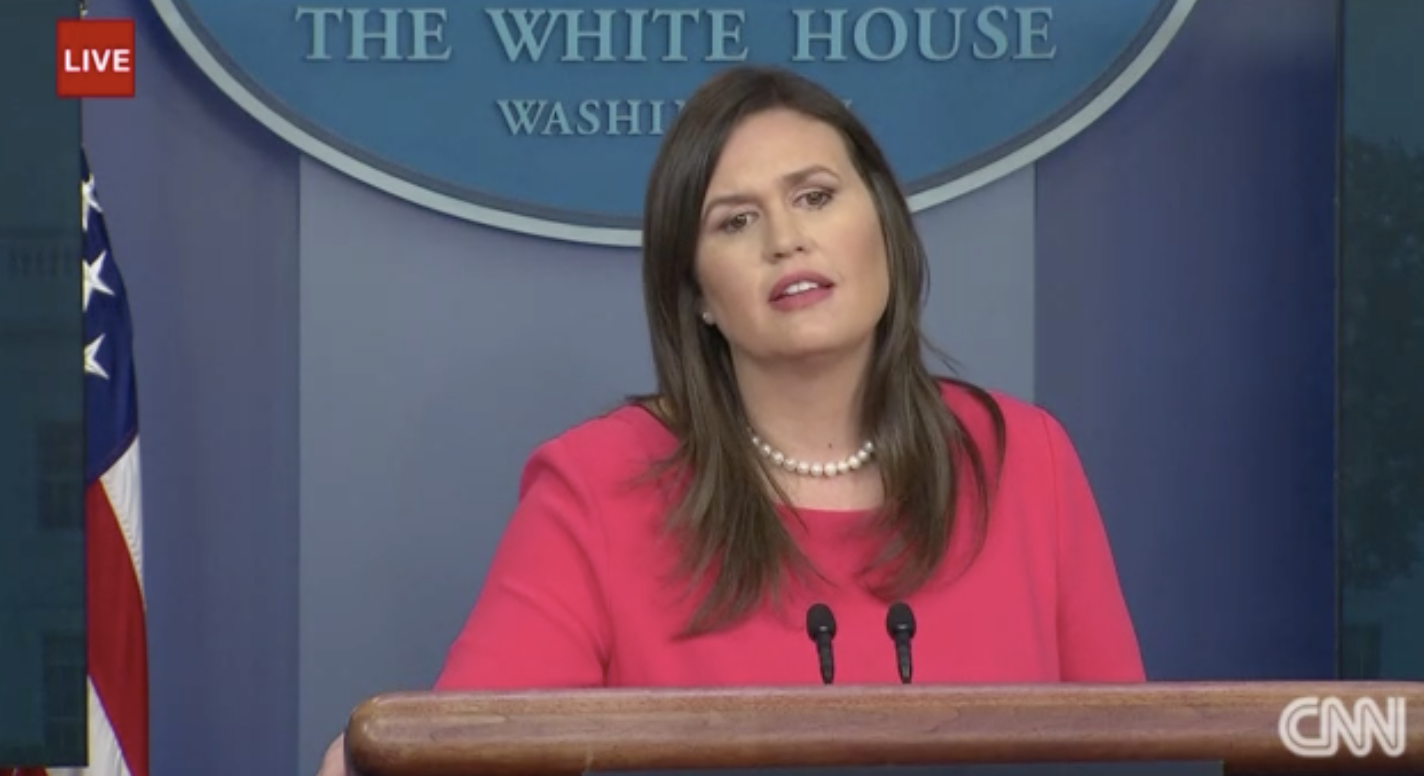 White House press secretary Sarah Sanders was just asked if the President is prepared to go through another government shutdown if lawmakers can not reach an agreement by Feb. 15, the new deadline to pass a spending bill.

"The President doesn’t want to go through another shutdown. That’s not the goal. The goal is border security and protecting the American people," she said.

Sanders continued: "Ideally Democrats would take these next three weeks and negotiate in good faith… and come up with a deal that makes sense so we don’t have to go through the process."

Last week, as Trump announced the deal to fund the government for three weeks, he threatened to shutdown the government again if a deal is not reached.

“Well if the President has made it very clear on this, on this matter that all options are on the table," Bolton said.

Some background on Venezuela: Protesters demonstrated last week with the opposition accusing Maduro's government of "usurping power" and has called for new elections.

Maduro has continued the huge social welfare programs and price control policies of Hugo Chavez, who steered the country toward socialism before dying in 2013. Through nearly a decade of mismanagement, Venezuela squandered its profound oil wealth, leaving its economy in tatters and Latin America reeling from an unprecedented mass exodus of migrants in search of food and medicine. 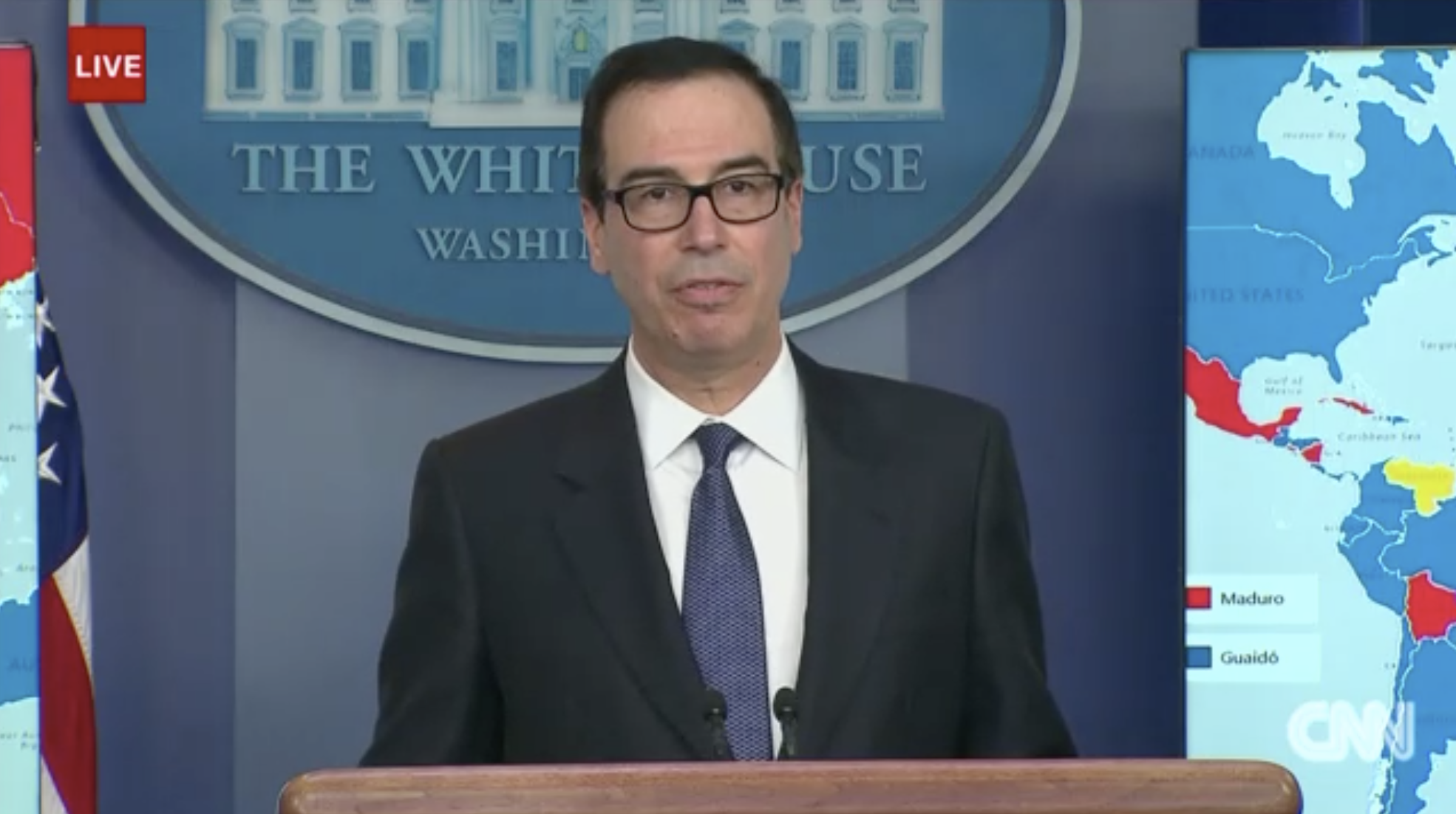 Mnuchin said the sanctions would be effective “immediately” and that any purchases of Venezuelan oil by US entities will have all money go into blocked accounts.

Mnuchin said PsVSA is only hearing about it now, although Senator Marco Rubio made a statement praising the sanctions earlier today.

In an accompanying release sent to reporters as he spoke, Mnuchin said the sanctions would "help prevent further diverting of Venezuela’s assets by [Venezuelan President Nicolas Maduro] and preserve these assets for the people of Venezuela." 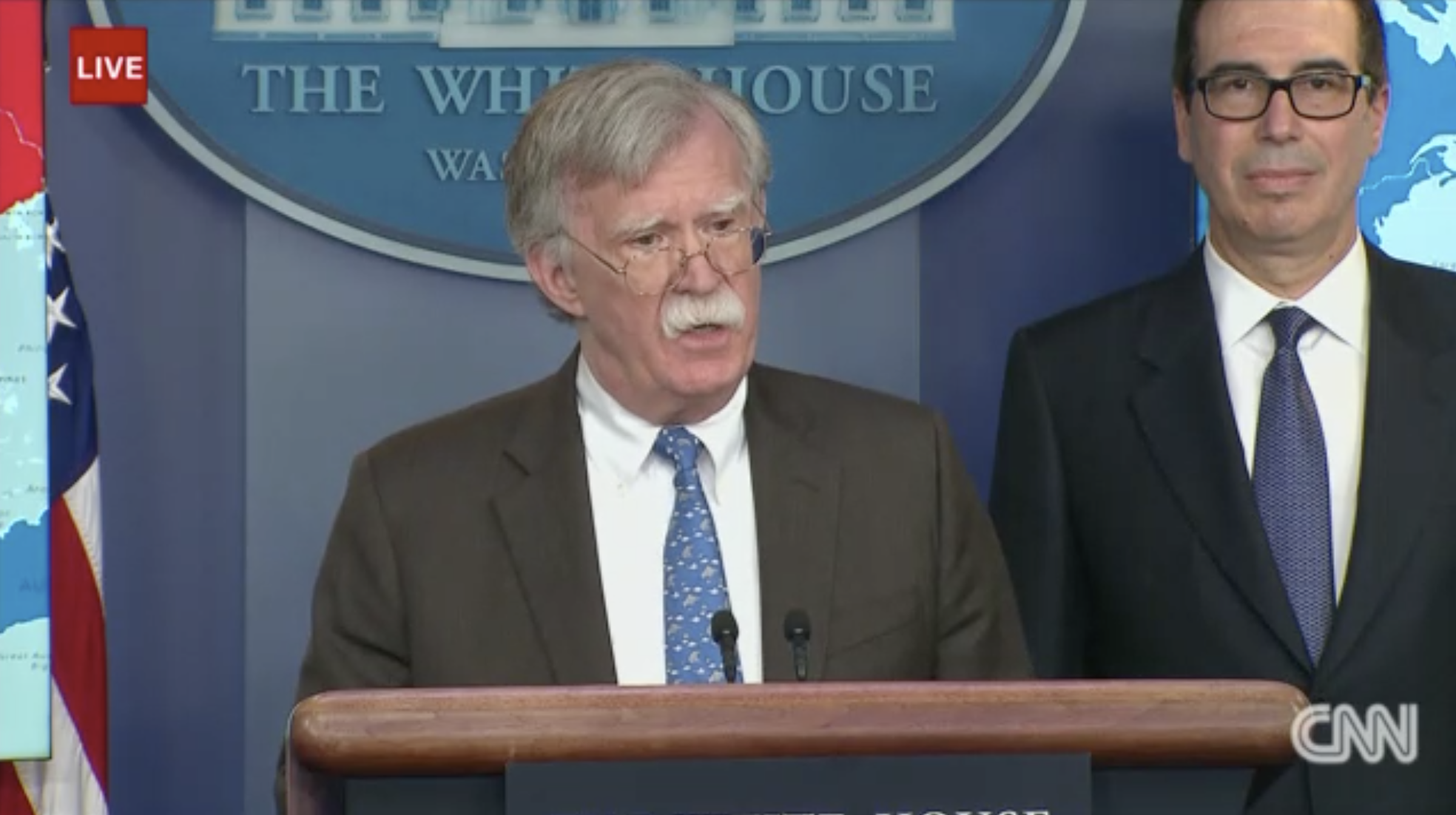 He urged all "responsible nations" to recognize Venezuelan opposition leader Juan Guaido as the legitimate president of Venezuela.

As Bolton was giving his remarks, the White House released the text of an executive order addressing the situation in Venezuela, and the Treasury department announced new sanctions. 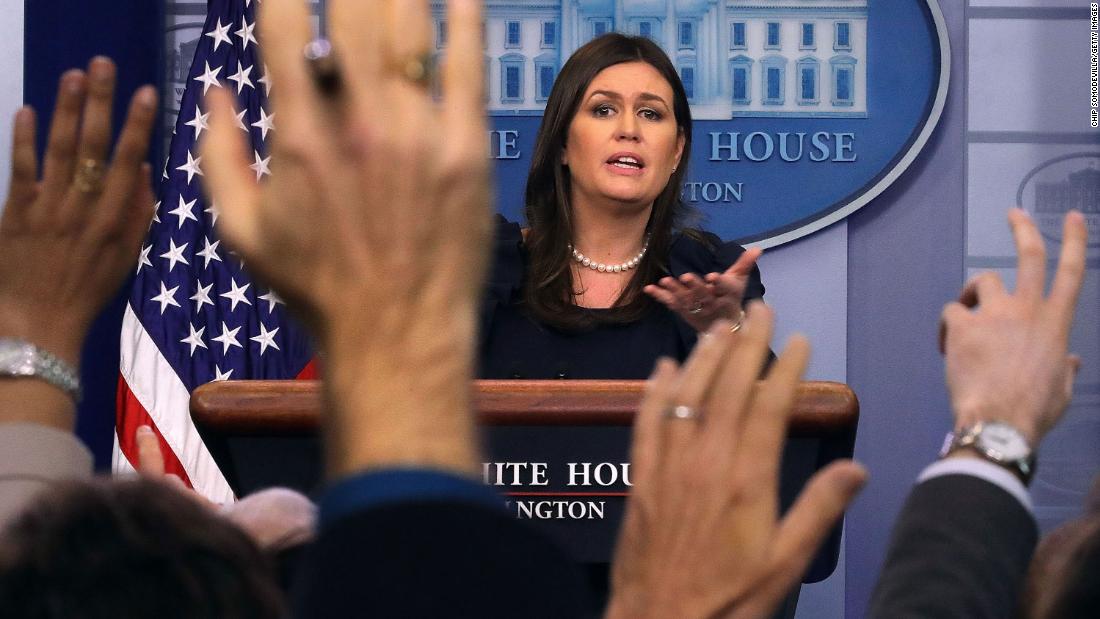 Here are some we're expecting to come up:

Today’s White House briefing will be the first in 41 days, ending the longest stretch with no briefing in the Trump administration.

For context: The previous record for the administration was 29 days without a briefing.

Last week Trump claimed on Twitter that he directed press secretary Sarah Sanders to stop holding regular briefings because “the press covers her so rudely & inaccurately.”

And if you're wondering about that Jan. 3 "briefing": The White House advertised a briefing that day — and that did mark President Trump’s first real visit to the briefing room.

However, Trump only made a statement and took no questions.