Rep. Steve Cohen, a Democrat from Tennessee, got into a heated exchange with Matt Whitaker, in which he asked the acting attorney general if special counsel Robert Mueller's investigation into Russian interference in the 2016 presidential election is a "witch hunt."

Whitaker, who is overseeing the special counsel, did not answer the question. President Trump has repeatedly called the probe a witch hunt.

Here's how the full exchange went down:

Whitaker: "Congressman, as I've mentioned previously, the special counsel's investigation is an ongoing investigation, and so I think it would be inappropriate for me to..."

Whitaker: "Congressman, it would be inappropriate for me to talk about an ongoing investigation."

Cohen: "You said you were not interfering with the special counsel's investigation. Have you denied him any funds he's requested at all?

Whitaker: "Congressman, I can tell this is an important issue for you..."

Cohen: "It's an important issue for the American public and for the whole world.

Whitaker: "Congressman, to answer your question directly, I have not denied any funds to the special counsel's investigation."

“We’ll see whether he’s going to be respectful of the fact that Congress has a separate and coequal branch of government and we have an oversight responsibility or whether he’ll continue to keep acting like a petulant child," the New York lawmaker said.

Whitaker is currently testifying before the House Judiciary Committee. You can watch the hearing in the video player at the top of this page.

Acting Attorney General Matt Whitaker has dodged some of the House Judiciary Committee's questions, citing confidentiality and executive privilege -- but the committee may have a second chance to grill him on those questions.

After Whitaker declined to answer whether he has discussed special counsel Robert Mueller's investigation to any third parties, committee Chairman Jerry Nadler warned that the committee would require more concrete answers in a separate closed-door deposition.

"After today's hearing, we'll attempt to reach an accommodation with the Department to obtain answers to these questions. As part of that process, I ask for your commitment to return for a deposition before this committee in the coming weeks, under oath, with an understanding that the transcript will be released to the public as soon as practicable therefore," Nadler said.

"Any questions that are unanswered today or that require consultation with the white house will be asked again at that proceeding, and I expect either a clean answer or a proper assertion of privilege claimed by the president." 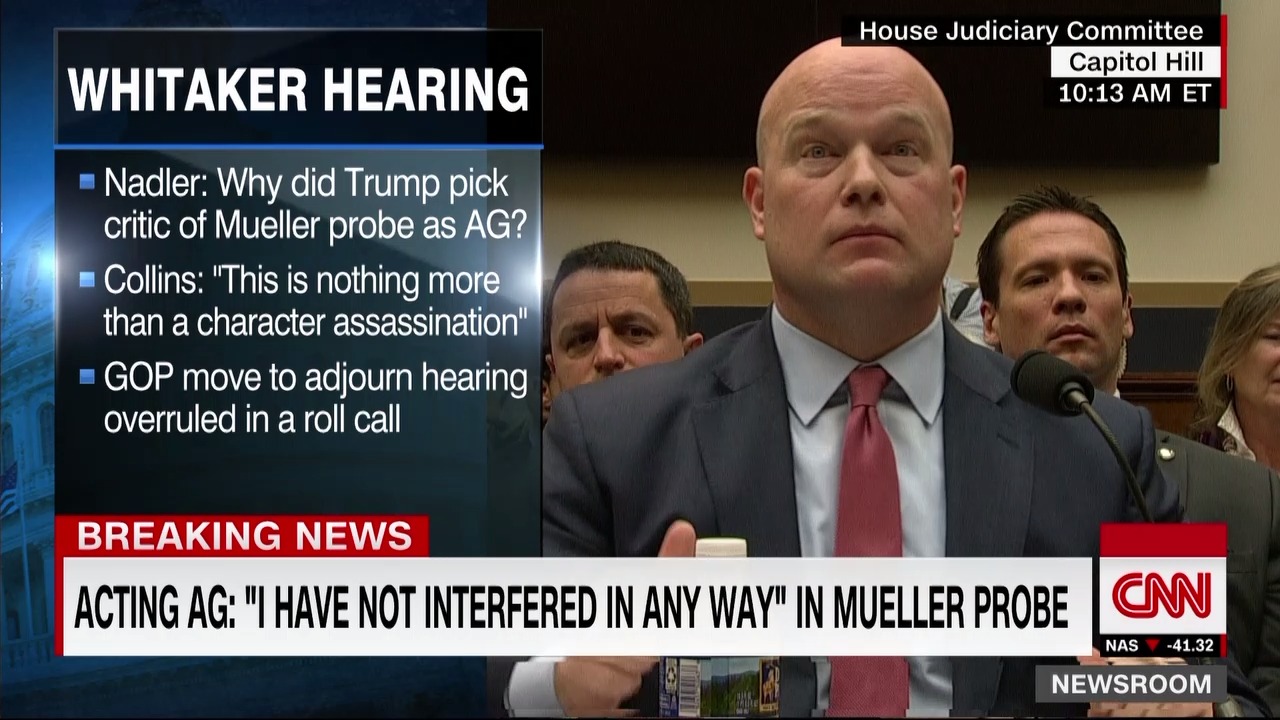 In response to House Judiciary Committee Chairman Jerry Nadler's questions on special counsel Robert Mueller's investigation, acting Attorney General Matt Whitaker insisted he has “not interfered in any way” with the investigation.

"In your capacity as acting attorney general, have you ever been asked to approve any action or request to be taken by the special counsel?" Nadler asked.

"Mr. Chairman, I see that your five minutes is up," Whitaker responded, to gasps and laughter from the Committee.

After a terse back-and-forth, Whitaker answered:

"I want to be very specific about this, Mr. Chairman, because I think it's going to allay a lot of fears that have existed among this committee, among the legislative branch largely and maybe amongst some American people. We have followed the special counsel's regulations to a T. There has been no event, no decision that has required me to take any action, and I have not interfered in any way with the special counsel’s investigation."

House Judiciary Committee Chairman Jerry Nadler pressed Acting Attorney General Matt Whitaker about special counsel Robert Mueller's investigation into Russian interference in the 2016 election. The Democrat asked is Whitaker if he and Trump had talked about the probe.

"Yes or not, have you communicated any information in that briefing to President Trump?" he asked.

After a long pause, Nadler continued: "It's a yes or no question. Have you communicated anything you learned in that briefing about the investigation to President Tump? Yes or no?"

Whitaker then said this:

"Mr. Chairman, as I've said earlier today in my opening remarks, I do not intend today to talk about my private conversations with the President of the United States. But to answer your question, I have not talked to the President about the special counsel's investigation." 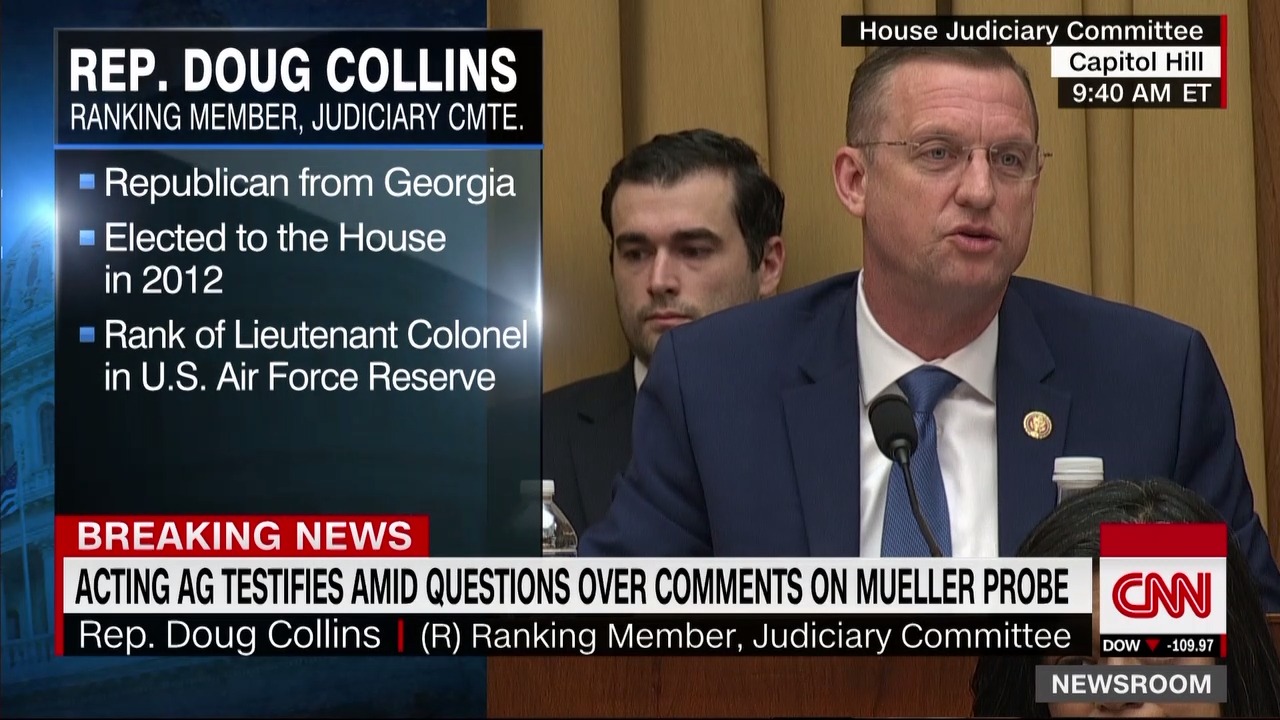 Georgia Rep. Doug Collins, the Republican ranking member of the House judiciary, blasted Democrats on the committee for a hearing he believed is "nothing more than a character assassination," and called Thursday's preemptive subpoena, which Democrats issued in case acting attorney general Matt Whitaker refused to answer questions, "pure political theater."

Collins, who represents a district that voted overwhelmingly for Donald Trump in the 2016 presidential election, compared Democrats to children searching for Easter eggs, hoping to find something damaging to the President.

"I want to tell you a story: My kids are now grown. They're 26 and down to 20. And I used to alway love the Easter season, and the time of especially hide and seek and going to find the eggs, and that look on their face when they found that last egg they were looking for. And just that look of surprise.
"And yesterday was that for me again. I was back being a father again. Because yesterday was nothing but pure political theater. It was wonderful! It was a time for hide and seek. The chairman had a hearing, 'Let's do a subpoena, we're going to stand tough.'"

Collins said he "warned this committee a preemptive subpoena wasn't a good idea," and said it could have a "detrimental effect to the acting attorney general." 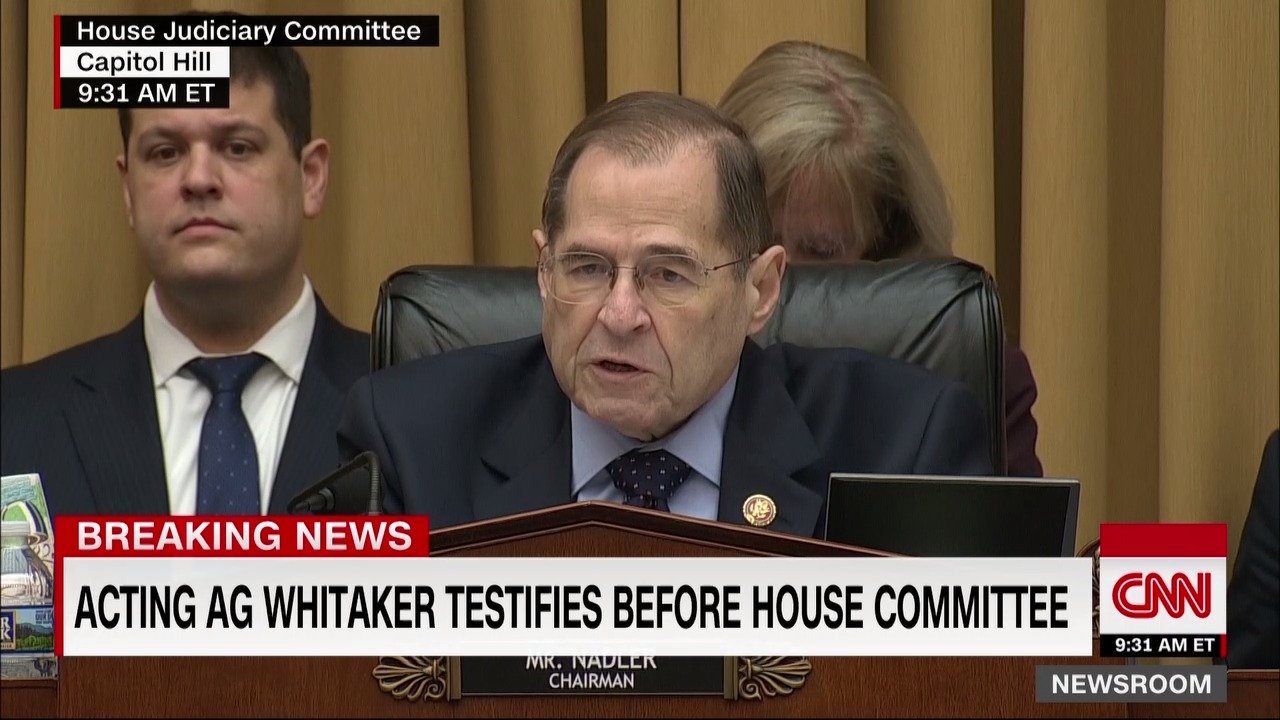 Ethics officials had recommended that Whitaker, having previously called the investigation a "lynch mob," recuse himself.

"Why did you ignore the career officials who went to extraordinary lengths to tell you that your continued involvement in the Special Counsel’s work would undermine the credibility of the Department of Justice?" Nadler asked in his statement.

He asked a series of other questions, warning, “"Your failure to respond fully to our questions here today in no way limits the ability of this Committee to get the answers in the long run—even if you are a private citizen when we finally learn the truth.”

"Although I am willing to work with the Department to obtain this information, I will not allow that process to drag out for weeks and months. The time for this Administration to postpone accountability is over," Nadler said. 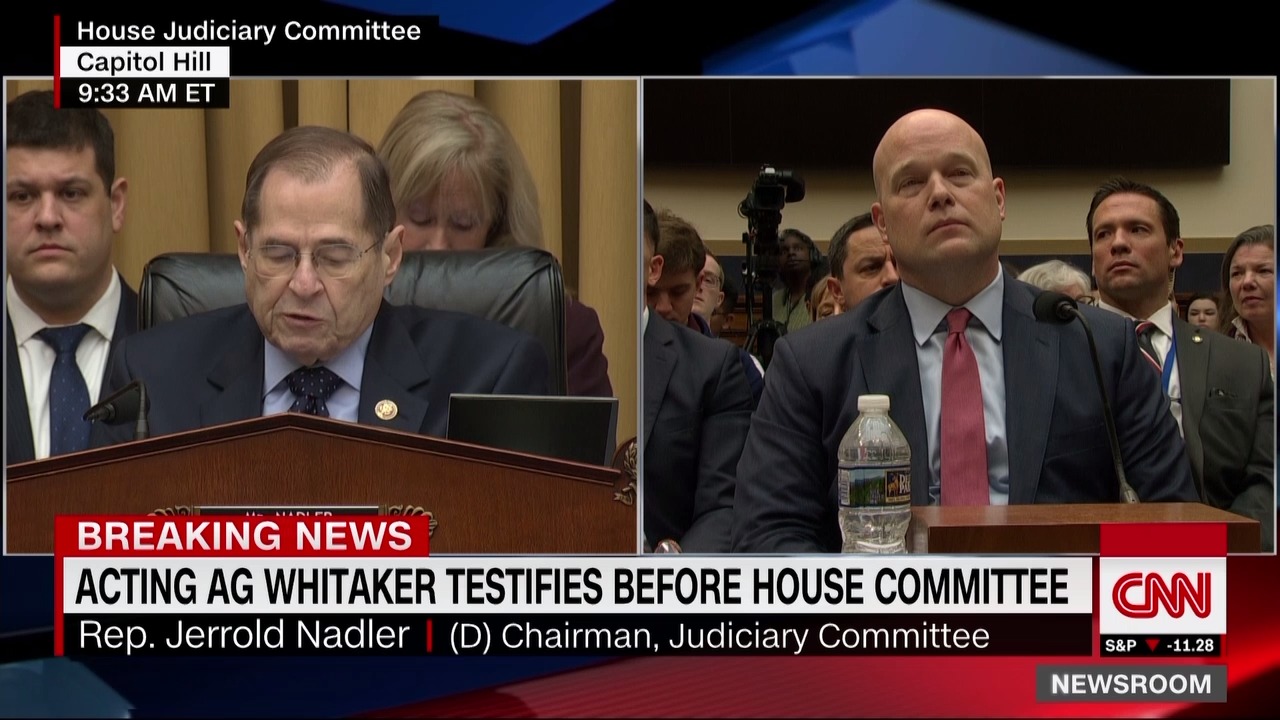 The House Judiciary Committee's oversight hearing is underway, and acting Attorney General Matt Whitaker is seated in front of the committee members.

Chairman Jerry Nadler, a Democrat from New York, is delivering his opening statements.

There's been some back-and-forth between Whitaker and Nadler: Nadler's committee pre-emptively authorized a subpoena to use if Whitaker avoids questions. The Justice Department yesterday said Whitaker would not testify without assurance he would not be subpoenaed — and Nadler eventually wrote back that he would would not use it if Whitaker was prepared to answer questions.

You can watch it live in the video player above. 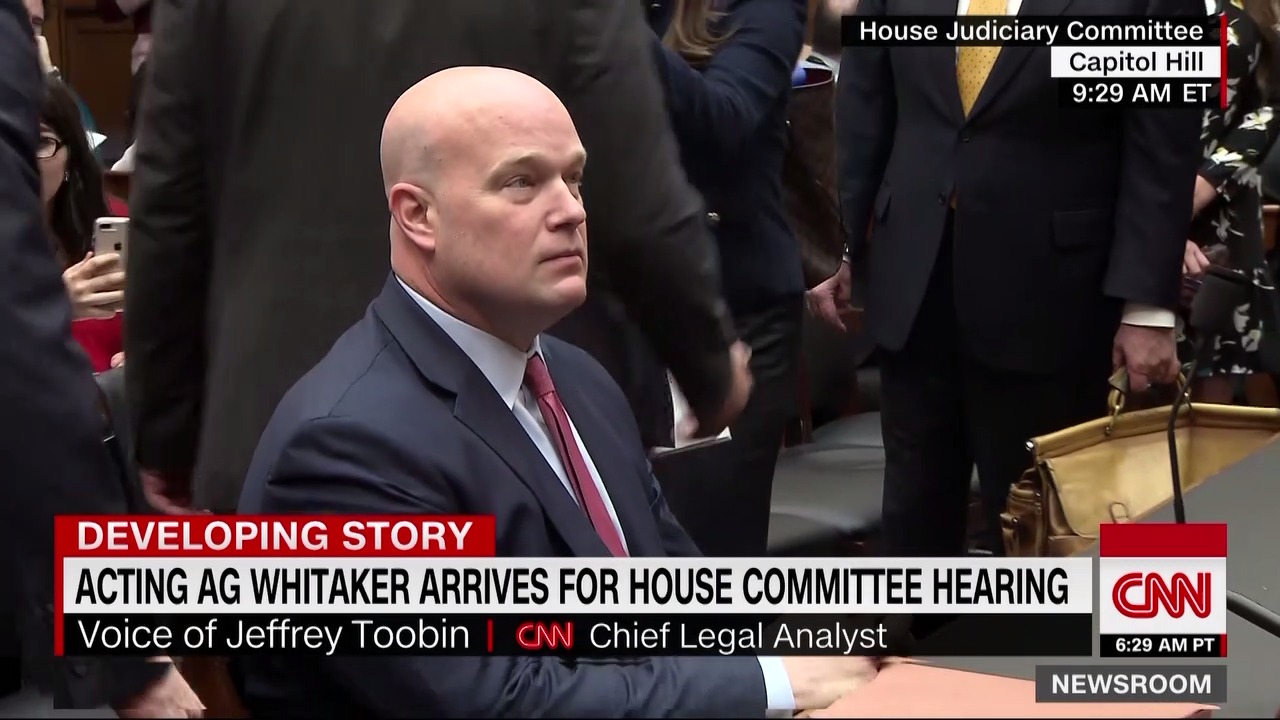 Acting Attorney General Matt Whitaker is about to testify before the House Judiciary Committee. Here's what to expect, according to CNN's Manu Raju: