Our live coverage of Acting Attorney General Matt Whitaker's testimony has concluded. Scroll through the posts below to see how the hearing unfolded or follow CNN Politics.

The hearing ended just before 3:30 p.m. ET, meaning it went on for nearly six hours.

The hearing included many tense moments and fiery back-and-forths between Whitaker and some Democrats. At one point, he cut off committee Chairman Jerry Nadler to note that the top Democrat's time was up, drawing the scoffs of astonished members of Congress. 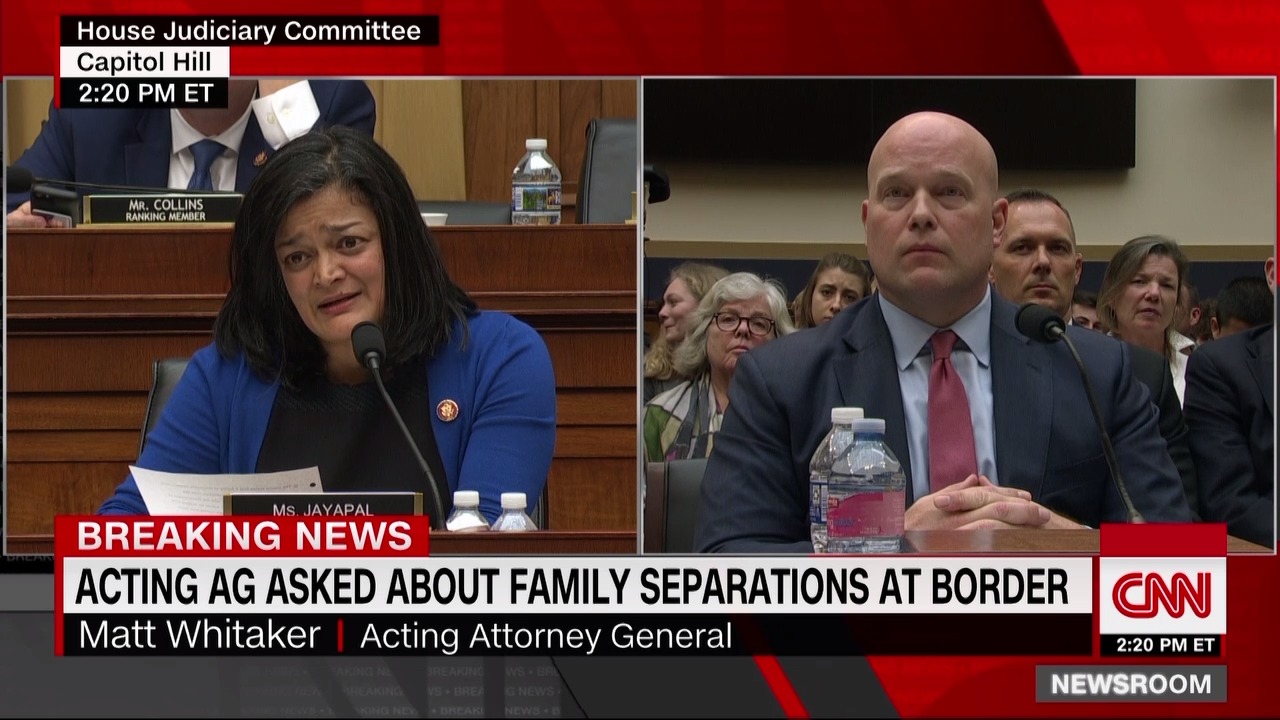 Whitaker repeated that “there was no family separation policy, despite a leaked memo among senior government officials revealing that the administration planned to separate families to deter migrants from coming to the US-Mexico border.

The administration’s controversial “zero tolerance” policy required that all adults apprehended at the border be subject to criminal prosecution, resulting in families being separated.

But Whitaker later conceded that the administration was not tracking the children who were separated by a parent or legal guardian after they were apprehended at the southern border.

“Before or after the zero tolerance policy was put into place and I call it the zero humanity policy, did the US attorneys track when they were prosecuting a parent or legal guardian who had been separated from their child? There’s only one answer to this. It’s gone through the courts,” Jayapal said.

“Did we track it?” Whitaker responded.

Jayapal followed up, “Did you track when you were prosecuting a parent of legal guardian who had been separated from a child?”

“I don’t believe we were tracking that,” Whitaker said.

A report from the Government Accountability Office and a Health and Human Services inspector general report have since revealed the chaos and confusion among federal agencies as the policy was rolled out. The HHS IG report, specifically, found that thousands of children had been separated prior to the policy being publicly announced.

Asked if the Justice Department provided advanced notice to other agencies, Whitaker repeatedly referred to a news conference by then-Attorney General Jeff Sessions in May 2018.

“The responsibility for the arrest, the detention and together with the custody of the children was handled by DHS and HHS before those people were ever transferred to DOJ custody through the US Marshals," Whitaker added.

The revelation came after Congressman Eric Swalwell, a Democrat from California, pressed Whitaker on the Mueller report.

Asked if he thought Mueller was honest, Whitaker said, "I have no reason to believe he's not honest, so yes I do believe he's honest."

Swalwell: "Has there been discussion at the Department of Justice about keeping the Mueller report from going to Congress?"

Whitaker: "No. We in fact were continuing to follow the special counsel regulations as it relates to the report. We haven’t received the report."

Swalwell: "Has there been a draft opinion about keeping it from going to Congress?"

Whitaker: "You know congressman I’m not going to talk about the kind of ongoing investigation that is the special counsel." 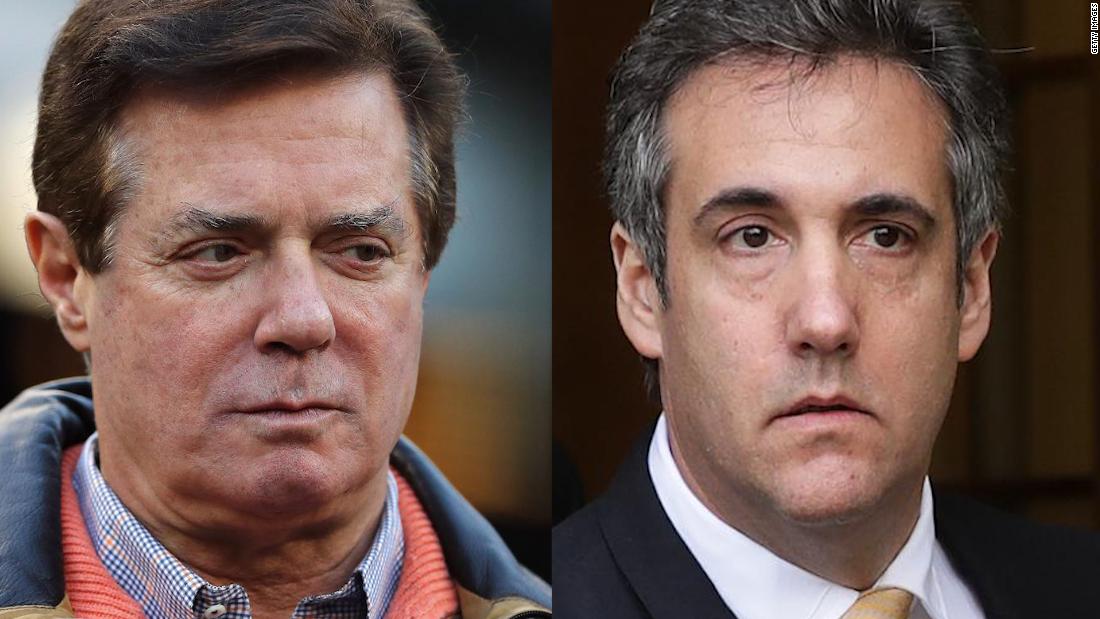 "Congressman, as I've been acting attorney general, I have not been involved in any discussions of any pardon, even and including the ones you're discussing," Whitaker said.

Acting Attorney General Matt Whitaker denied a CNN report that President Trump had lashed out at him on at least two occasions, angered by federal prosecutors who referenced the President's actions in crimes his former lawyer Michael Cohen pleaded guilty to.

Asked by Rep. David Cicilline, a Democrat from Rhode Island, if the President had “lashed out” at him after Michael Cohen's guilty plea for lying to Congress, and again days later when prosecutors in Manhattan implicated Trump in a hush money scheme around the 2016 election, Whitaker said, “No, he did not.”

Whitaker also denied that anyone inside or outside of the White House had lashed out at him after the Cohen developments.

CNN’s report was based on multiple sources familiar with the matter.

Cicilline: "Did the President lash out at you after Michael Cohen’s guilty plea for lying to Congress about a Trump organization project to build a tower in Moscow?"

Whitaker: "The President specifically tweeted that he had not lashed out."

Cicilline: "I’m asking you Mr. Whitaker, did the President lash out at you? Not asking what he tweeted. I don’t have a lot of confidence in the veracity of his tweets. I’m asking you under oath."

Whitaker: "Congressman that is based on an unsubstantiated…"

Cicilline: "Sir, answer the question: yes or no, did the President lash out at you about Mr. Cohen’s guilty plea?" 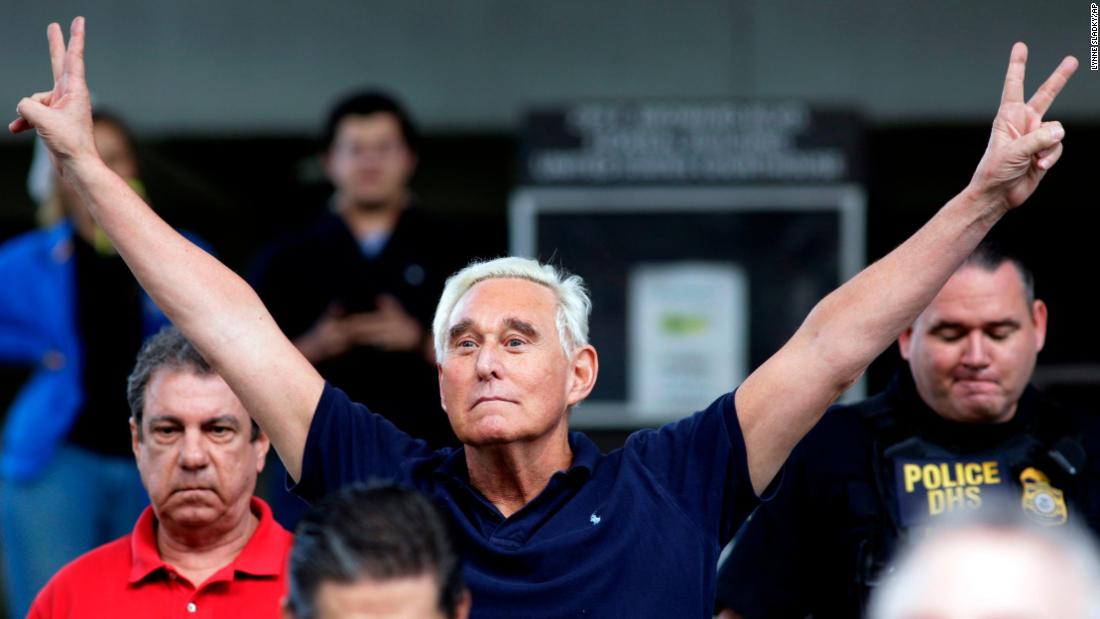 The FBI is prepared to brief House Judiciary Committee members in a closed session on the factors that influenced their decision to conduct the Roger Stone arrest before dawn and with heavy weapons drawn, Acting Attorney General Matt Whitaker said Friday.

“The FBI makes arrests in a manner most likely to ensure the safety of its agents and of the person being arrested. The FBI must also consider the safety of the surrounding community,” Whitaker said.

“I cannot provide the details in this open hearing without revealing what factors the FBI considers in those decisions and obviously that information could be used to put other FBI agents conducting other operations in harm’s way. What I can assure you, congressman, is that the FBI is prepared to brief this matter on the decisions that were made in that particular arrest in a closed session of this committee,” he said.

Stone has been highly critical of the manner in which he was arrested, though he has praised the individual FBI officers that he dealt with as professional. A number of Republican lawmakers have asked the Justice Department to explain the manner of the arrest. 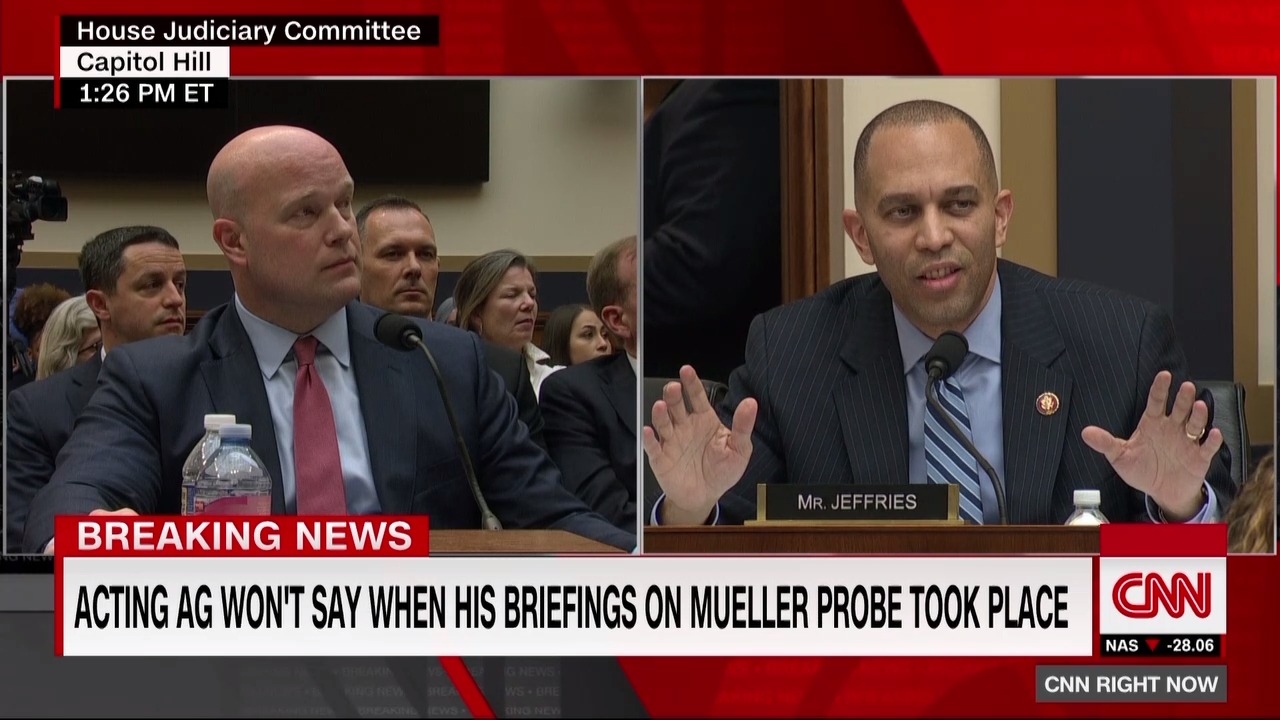 Democratic Congressman Hakeem Jeffries, who earlier today told CNN that Acting Attorney General Matt Whitaker was acting like a "petulant child," opened his five-minute questioning by asking, "Who are you? Where did you come from? And how the heck did you become the head of the Department of Justice?"

Jeffries then proceeded to ask Whitaker to confirm the identified criminal acts, indictments, and prison sentences that have come from special counsel Robert Mueller's investigation so far.

"One by one, all of the president's men are going down in flames," Jeffries said.

"Let's be clear. The investigation into Russia's attack on democracy is not a witch hunt, it's not a fishing expedition, it's not a hoax, it's not a lynch mob, it's a national security imperative. The fact that people suggest otherwise comes dangerously close to providing aid and comfort to the enemy," he added.

"In your final week, keep your hands off the Mueller investigation," Jeffries warned before yielding his time. 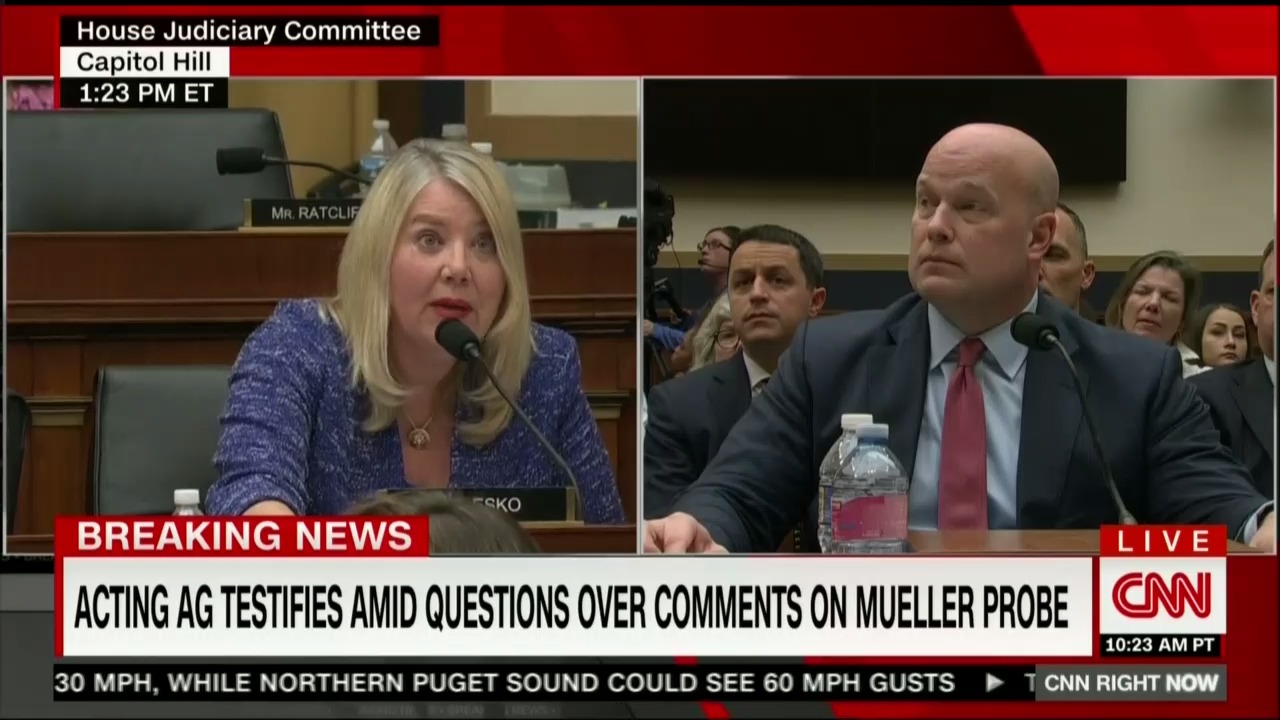 "You know, I have to say that I'm very disappointed in this hearing. You know, I ran for Congress to get things done, and at the beginning of this, you know, we were told that this is about asking about DOJ oversight and some legitimate questions," she said.

Lesko said the hearing is "nothing but character assassination, harassment of our witness, and it's really disappointing."

The congresswoman said she was initially mad about the hearing. But now she's sad.

"At first I was mad. I have to tell you, when this thing started hours ago, I went outside and a reporter asked me, what do you think of the hearing? I said, 'It's a joke.' But now I'm just sad. I'm sad because we were on the floor just a little while ago talking about how we are honoring our late representative (John) Dingell in talking about bipartisanship and how we need to get things done. And yet here we are a blatant political show that doesn't help anything. I imagine if American people are watching this right now, they would be shaking their heads, like what are you doing there? We need to work together to get things done," Lesko said.