Guthrie asked Trump if he could state that the conspiracy — centered around the belief Democrats run a satanic pedophile ring and that Trump is an anti-pedophilic savior — was not true.

Trump responded, “I know nothing about QAnon."

“I just told you,” Guthrie said.

Trump fired back, saying, “What you tell me doesn’t necessarily make it fact.”

The President claimed that all he knows about the conspiracy theory movement, which has had a prevalent presence at his campaign rallies, is that “they are very much against pedophelia” and that he agrees with that sentiment.

The President also tried to separate himself from his recent retweet of a conspiracy theory from an account linked to QAnon, which baselessly claimed that former Vice President Joe Biden orchestrated to have Seal Team Six killed to cover up the fake death of Osama bin Laden.

But Guthrie responded, “I don’t get that. You’re the President. You’re not like someone’s crazy uncle who can retweet whatever.”

Trump has frequently used his social media platform to promote various QAnon-associated accounts and their theories. In August, he went so far as to embrace their support.

"I don't know much about the movement other than I understand they like me very much, which I appreciate," Trump said in August.

He has also defended his decision to endorse a Republican congressional candidate in Georgia with history of promoting QAnon theories and making racist and anti-Semitic remarks.

President Trump is conducting a town hall tonight instead of a debate by his choice. But the result was 20 minutes of contentious live grilling with only himself in the spotlight — a rarity for a President who sticks mostly to a friendly bubble of conservative media.

A lawyer by training, moderator Savannah Guthrie would not let up when Trump evaded questions about his coronavirus diagnosis, whether he was tested the day of the debate, his stance on White supremacy, his ties to QAnon or his view of mail-in voting.

Without a rival on the stage, Trump was alone in fielding the questions. And he had no opponent to pepper with his own attacks.

Instead, Trump found himself on the defensive and increasingly angry — including scoffing at a question Guthrie asked by calling her “cute.”

It’s the type of performance some of Trump’s advisers had hoped to avoid, recognizing it’s that type of behavior that has turned off women voters and senior citizens. Trump has appeared more moderated when answering questions from the town hall participants. But his first 20 minutes were the type of contentious and sustained questioning that have been exceedingly rare during his presidency.

President Trump pledged in 2016 to repeal the Affordable Care Act, but that hasn’t happened. Now, his administration is backing a court challenge that’s scheduled for the Supreme Court just after the election in a case brought by a coalition of Republican state attorneys general and the Trump administration, who argue the law's individual mandate is unconstitutional, and the entire law must fall.

Trump's Supreme Court nominee Amy Coney Barrett was grilled by Democrats about the health care law during her confirmation hearings this week. Barrett said she had made no commitments to the President or anyone else about how she might rule on a case aimed at dismantling the Affordable Care Act or on a potential dispute in the upcoming presidential election.

If the court wipes away Obamacare, it would have a sweeping impact on the nation's health care system and on the lives of tens of millions of Americans — not only for the roughly 20 million people who've gained coverage on the Affordable Care Act exchanges and through the expansion of Medicaid to low-income adults.

The law is also what allows parents to keep their children on their health insurance plans until age 26 and obtain free mammograms, cholesterol checks and birth control. And one of its most popular provisions is its strong protections for those with pre-existing conditions, including barring insurers from denying coverage or charging higher premiums based on people's health histories.

Joe Biden said Thursday that his pledge to eliminate the tax cuts that Donald Trump enacted in his first term were aimed only at tax cuts for the wealthy, not the middle class.

Republicans have tried to hammer Biden as someone who wants to raise taxes on the middle class because of his pledge to end the tax cuts signed into law by Trump.

“When I said the Trump tax cuts, about $1.3 trillion of the $2 trillion in his tax cuts went to the top one tenth of 1%,” Biden said. “That’s what I’m talking about eliminating. Not all the tax cuts that are out there.”

Biden implied that most of that change would focus on the corporate tax rate, something that was cut under Trump.“If you raise the corporate tax back to 28%, which is a fair tax, you’d raise over $1 trillion by that one act,” Biden said. “If you made sure that people making over 400 grand paid what they did in the Bush administration. It goes up to… another $92 billion. So, you can raise a lot of money to be able to invest in things that can make your life easier.”

Trump signed a tax overhaul into law in 2017, early in his first term. The law was Trump’s first major legislative victory of his first year in office.

When ABC's George Stephanopoulos pushed Biden if he would raise the corporate tax rate even when the economy was struggling, Biden said, “Absolutely.”

Joe Biden on Thursday made it clear that he would not hesitate to receive a coronavirus vaccine once the scientific community signs on to its safety and effectiveness.

“If the body of scientists say (it’s ready) and it’s been tested, it’s gone through the three phases – yes, I would take and I would encourage people to take it,” he told a questioner who brought up a comment by his running mate, California Sen. Kamala Harris, who expressed concern that President Trump would push forward a vaccine for political purposes.

Biden took the question as an opportunity to remind viewers of some of Trump’s most shocking and ridiculous statements about potential Covid-19 treatments, specifically when he mused, as Biden described it, about “inject(ing) bleach in your arm.”

Asked if he would mandate that others do the same, Biden did not commit to a position, noting that he – if elected – would not have that power.

As to whether he would do his best to pressure others, Biden said, “It depends on the state of the nature of the vaccine when it comes out and how it’s being distributed.”

“We should be thinking about making it mandatory,” he said, adding that, should that be the decision, he would press “every governor” and, failing that, “every mayor” to pursue a mass vaccination policy in their jurisdictions.

President Trump said he denounced White supremacy tonight during a town hall on NBC after he didn't do so during the first presidential debate.

The President's stance on White supremacy became a flash point after the first debate when Trump refused to condemn White supremacists for inciting violence at anti-police brutality demonstrations across the country, claiming instead that violence was coming from "the left wing."

During that debate, the President instead used ​his allotted time to blame ​what he called "Antifa and the left​" for violence and to tell the Proud Boys to "stand back and stand by." ​

Joe Biden opened his ABC town hall on Thursday night by describing how he would have handled the coronavirus differently, using the comparison to lambast President Donald Trump for his somewhat uneven response to the virus.

“He missed enormous opportunities and kept saying things that weren’t true,” the Democratic nominee said, noting that Trump’s administration said the virus would go away by Easter or be eradicated by the summer heat.

Biden said his administration would have followed the pandemic plan laid out by Barack Obama’s administration before Trump took office, saying his first move would have been sending Americans to China to get the most up to date knowledge on the virus.

Biden said there should have been more national standards earlier in the pandemic and that the President should be pushing all Americans to use masks as a way to stop the spread. Biden said he would lean on governors, as president, to mandate mask use.

“He didn’t talk about what needed to be done because he kept worrying, in my view, about the stock market,” Biden said of Trump. “He worried if he talked about how bad this could be, unless we took these precautionary actions, then, in fact, the market would go down. And his barometer of success of the economy is the market.”

President Trump said he feels "good" after testing positive for Covid-19 weeks ago and couldn't recall whether he was tested on the day of the first presidential debate.

"I don't know, I don't even remember. I test all the time. I can tell you this. After the debate, like, I guess, a day or so, I think it was Thursday evening, maybe even late Thursday evening, uh, I tested positive. That's when I first found out," the President said.

Asked again whether he took a test in adherence to rules set by the Commission on Presidential Debates, he said, “I probably did and I took a test the day before.”

Trump's remarks were made during his town hall on NBC tonight, adding that he has no Covid-19 symptoms "what so ever."

"I feel good, I was in North Carolina today, a big rally with a tremendous turnout. I just feel really good. Florida, Pennsylvania, we're all over the place. It's been great," Trump said.

Trump also discussed how he felt after contracting the virus. 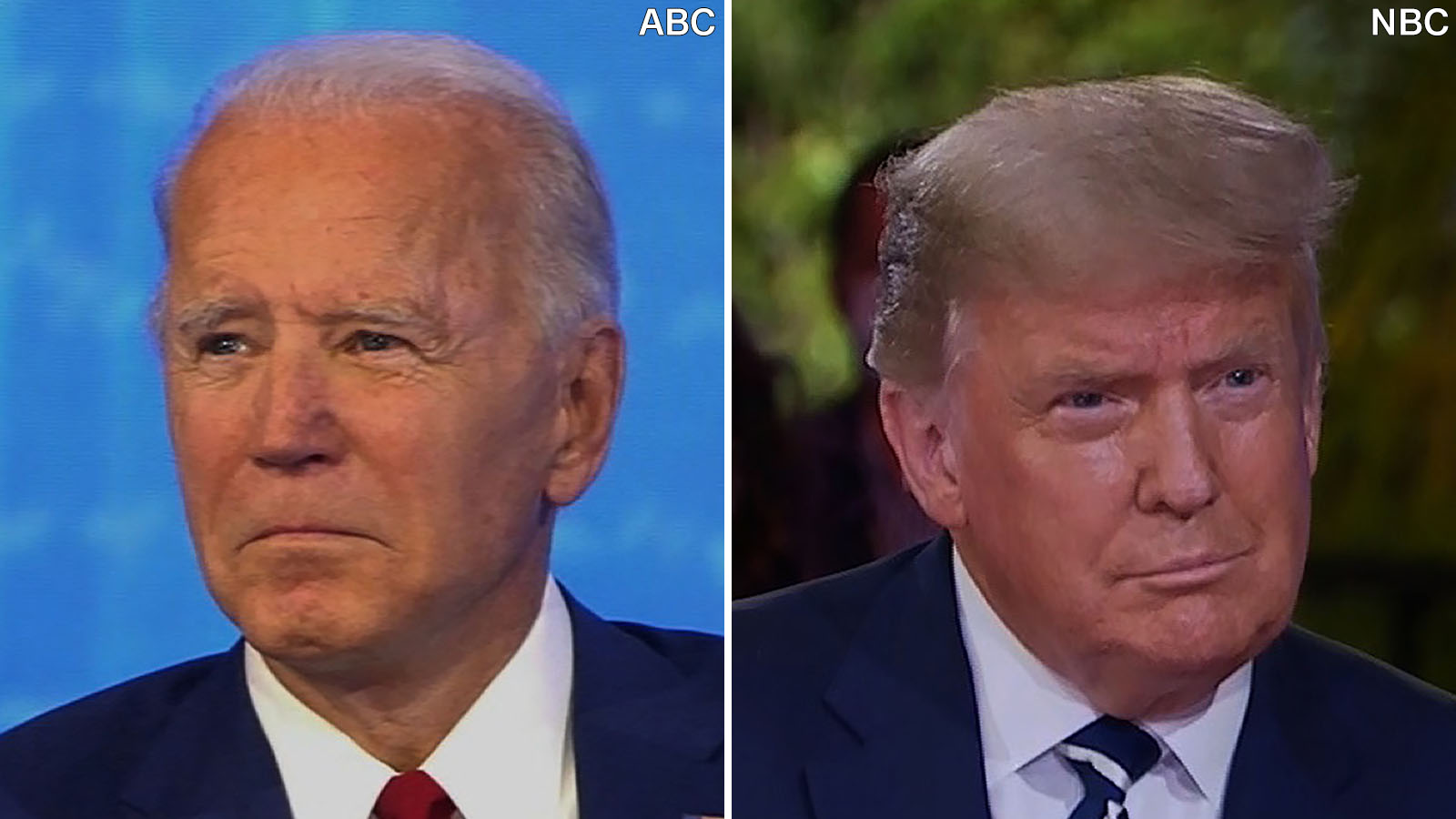 Both town halls kicked off with questions about coronavirus. NBC's Savannah Guthrie asked President Trump about his Covid-19 diagnosis and symptoms. Meanwhile, a voter in ABC News' town hall asked Democratic presidential nominee Joe Biden about Trump's coronavirus response and what policies he would implement if he were president.

The coronavirus pandemic continues to become a key issue of the 2020 election and shape the campaign as Election Day quickly approaches. 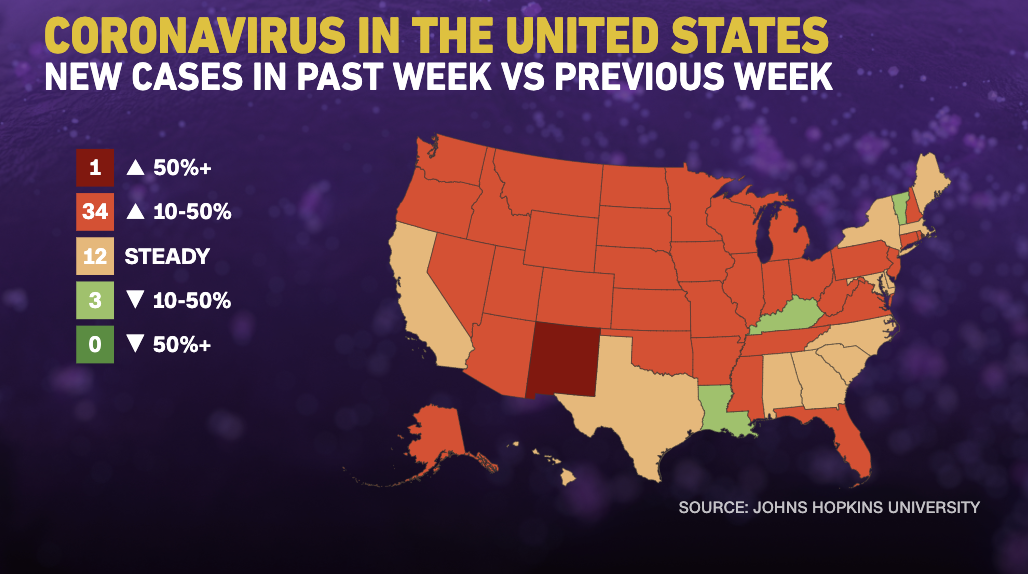