Our live coverage has ended. Read more about the 2020 election here

“Vice President Biden underwent PCR testing for COVID-19 last night and COVID-19 was not detected," the campaign said, according to pool.

Vice President Pence has tested negative for coronavirus again, according to his office.

He’s been cleared by the medical unit to continue traveling. Pence is scheduled to have rallies in Iowa and Nevada today.

From the economy to the coronavirus pandemic, six voters discussed what they believe are the biggest issues in the 2020 election.

The panel did not use the voters’ last names. The voters have all been on previous “Pulse of the People” voters panels on CNN’s “New Day.”

Jimmy, who is voting for Trump, said that the biggest issue is the economy.

“By this time next year, we will be talking about the economy. If Biden gets in, it's going to be a disaster; if Trump stays in, it will probably be as good as it was,” he said to CNN’s Alisyn Camerota.

Stephanie, who is voting for Biden, said she thinks the issues of education and health care largely intertwines with the coronavirus pandemic as well. She said she’s been waiting for four years to see Trump’s health care plan.

Trump still has not presented a plan to replace Obamacare.

Voter Jimmy said he’s confident that Trump will not leave out people with pre-existing conditions.

“He said he would not do it; the man does what he says,” Jimmy said.

Bobby, an undecided voter, said that the country will adapt no matter who the victor is.

“If Trump wins or Biden wins, I mean, I'm fine either way; we'll live, we'll move on as a country, we always have. The country will survive,” he said.

At least 3,867,846 ballots have been cast in North Carolina as of 5:00 a.m. this morning, according to data provided by the North Carolina State Board of Elections.

That means almost 53% of all currently registered voters in the state have already voted in the 2020 election.

Put another way, five days before Election Day, North Carolina voters have cast than more than 80% of the total number of votes cast in the entire 2016 Election.

Voters can no longer request an absentee by mail ballot in North Carolina.

The Biden campaign is flooding the digital airwaves in the final days of the campaign, making an eight-figure investment on Covid-related ads as the pandemic remains a top issue on the ballot, a campaign aide confirms to CNN.

It's also running takeovers on sites like Hulu, Pandora, Univision and BET that highlight the contrast between President Trump and Joe Biden in their approach to the coronavirus, the aide says.

This is a new buy in addition to the campaign's previously announced $280 million paid media investment for the fall.

Details of the Covid-related digital ad push were first reported by Axios.

This last push also includes a new television ad, Under Control, focused on Biden's plan to tackle Covid-19 that will air on digital and nationally on television.

One ad, titled "Climate Change," will air on Comedy Central and Adult Swim in the final week, while Melanie, a climate change testimonial featuring a firefighter from Colorado, will air on MSNBC.

Michigan Rep. Debbie Dingell says that the race between President Trump and Joe Biden is “tightening” in the swing state.

Dingell said she’s been talking with auto workers who she said she thought would be voting for Biden, but they made it clear to her that they were voting for Trump.

While she said she wants to “make it clear the Biden campaign is listening,” she thinks “in these last days, people are focused on turning out the Detroit, Flint votes, which matter greatly and may not quite be at the numbers people would like to see.”

But “we can't forget that auto worker, the steelworker, the teamster whose jobs they’ve lost and are worried about and want to know, as Democrats, we care,” Dingell said.

She said she told the Biden campaign last night that they need to focus on White union workers in the final days before the election.

Democratic nominee Joe Biden is pledging that if he’s elected president, he will sign an executive order to form a task force that will focus on reuniting the 545 immigrant children who’ve been separated from their families.

The pledge was discussed in a digital ad the campaign has started airing in Arizona, Florida, North Carolina, Pennsylvania and Nevada, a Biden campaign official said.

“On his first day as president, Joe Biden will issue an executive order creating a federal task force to reunite these children with their parents,” the narrator says.

More on this: Lawyers have not been able to reach the parents of 545 children who had been separated from their families by US border officials between 2017 and 2018, according to a court filing last week.

Hundreds of parents may also have been deported without their children.

The filing from the Justice Department and the American Civil Liberties Union is part of an ongoing effort to identify and reunite families separated by the Trump administration, more than two years after the "zero tolerance" policy was created.

While a federal court order forced the reunification of many of those families, an explosive government watchdog report released last year revealed there could be thousands more who hadn't previously been acknowledged by officials.

House committee chairs sent a letter Wednesday to Health and Human Services Secretary Alex Azar releasing new documents they obtained from contractors regarding a $250 million contract with a marketing firm handling a campaign on coronavirus.

“It is critical that HHS provide accurate, nonpolitical public health information to the American people that encourages mask wearing, social distancing, and other science-backed public health recommendations,” wrote the Chairs.

“Yet, the documents we have obtained indicate that HHS political appointees sought to use taxpayer dollars to advance a partisan political agenda and direct taxpayer money to their friends and allies," the Democratic committee chairs wrote.

One issue the Democrats claim they found in documents from government contractors is that, “Trump Administration official Michael Caputo inserted partisan political interests into the ad campaign.”

Politico and the Washington Post first reported the letter.

The CNN Poll of Polls tracks the average poll result in the race for president between President Trump and former Democratic nominee Joe Biden.

The poll of polls includes the most recent polls which meet CNN’s standards for reporting and which measure the views of registered or likely voters.

The poll of polls does not have a margin of sampling error.

Here's the latest polling average as of Oct. 28: 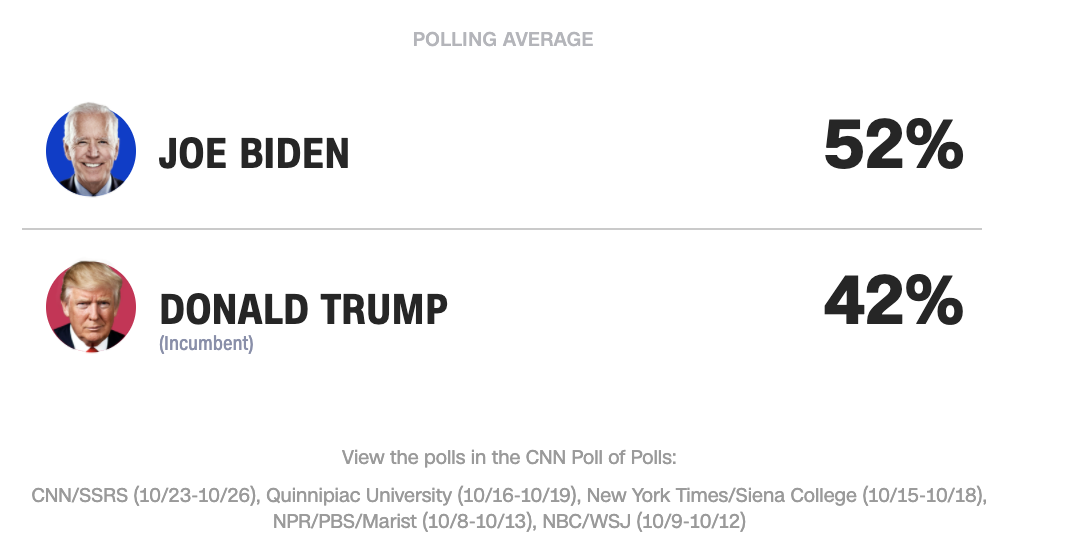