More than 50 million Americans have already cast their general election ballots with a week and a half until Nov. 3, according to a survey of election officials by CNN, Edison Research, and Catalist.

Voters in the 48 states and DC with pre-election vote data available are already setting records as they seek to cast their ballots either by mail or in-person where available.

Around 55% — more than half — of those pre-election votes come from CNN’s 16 most competitively-ranked states, which will most likely determine who will win the presidency next month.

The 50 million ballots cast so far represents more than 36% of the more than 136 million total ballots cast in the 2016 presidential election. Some voter information comes from Catalist, a company that provides data, analytics and other services to Democrats, academics and nonprofit issue-advocacy organizations and is giving new insights into who is voting before November.

President Trump disciplined himself for Thursday night's presidential debate and dispensed with the interruptions. And with former Vice President Joe Biden able to talk this time, unlike in the first debate, there was a serious policy discussion.

Here's a breakdown of some of the key issues:

Coronavirus: Trump continued to downplay the severity of the virus and defend his early reaction — restricting travel from China — and promising, despite the facts, that a vaccine will be ready shortly. Biden, pointing to the death toll from the virus, repeatedly held up a mask and said he'd push common-sense advice to states to encourage mask-wearing, social-distancing and restrictions on things like dining in restaurants if there are outbreaks in a state. Trump continues to argue he should be judged for the pre-Covid economy and the pre-Covid reality. He said millions could have died from Covid, as if that absolves him from having to deal with the fact that hundreds of thousands have died on his watch.

Health care: Trump still thinks that Obamacare — the Affordable Care Act — should be invalidated. He has spent years promising a plan to replace it. But there is no plan, as of yet. Biden, on the other hand, wants to one-up the Affordable Care Act by adding the public health care option Democrats were unable to add to Obamacare 10 years ago. There's a fundamental disagreement here about whether a public option equals socialized medicine. Trump says yes and Biden says no.

Policing, justice and racism: Biden called Trump the most racist president. Trump said he's done more for Black Americans than any other president. What's the truth? Trump did sign a sentencing reform bill. But it didn't solve the problem of over-incarceration, no matter what he says. Biden did certainly mastermind the 1994 crime bill that helped create over-incarceration. The difference now is Trump wants to demonize protesters for racial justice and paint himself as the law and order President.

Immigration: Somehow Trump was accusing Biden of inhumanity on immigration, arguing that the Obama administration began the policy of family separation. There's a kernel of truth there, but the Trump administration had institutionalized it before the outcry made them stop. There are still more than 500 kids whose parents can't be found and, in a major moment, Trump said at the debate, "They are so well taken care of."

President Trump and Democratic presidential nominee Joe Biden faced off in their second and final presidential debate of the 2020 election season last night, in Nashville, Tennessee.

The two men discussed various issues, including the coronavirus pandemic, health care, the economy and immigration.

You can watch the full debate here. 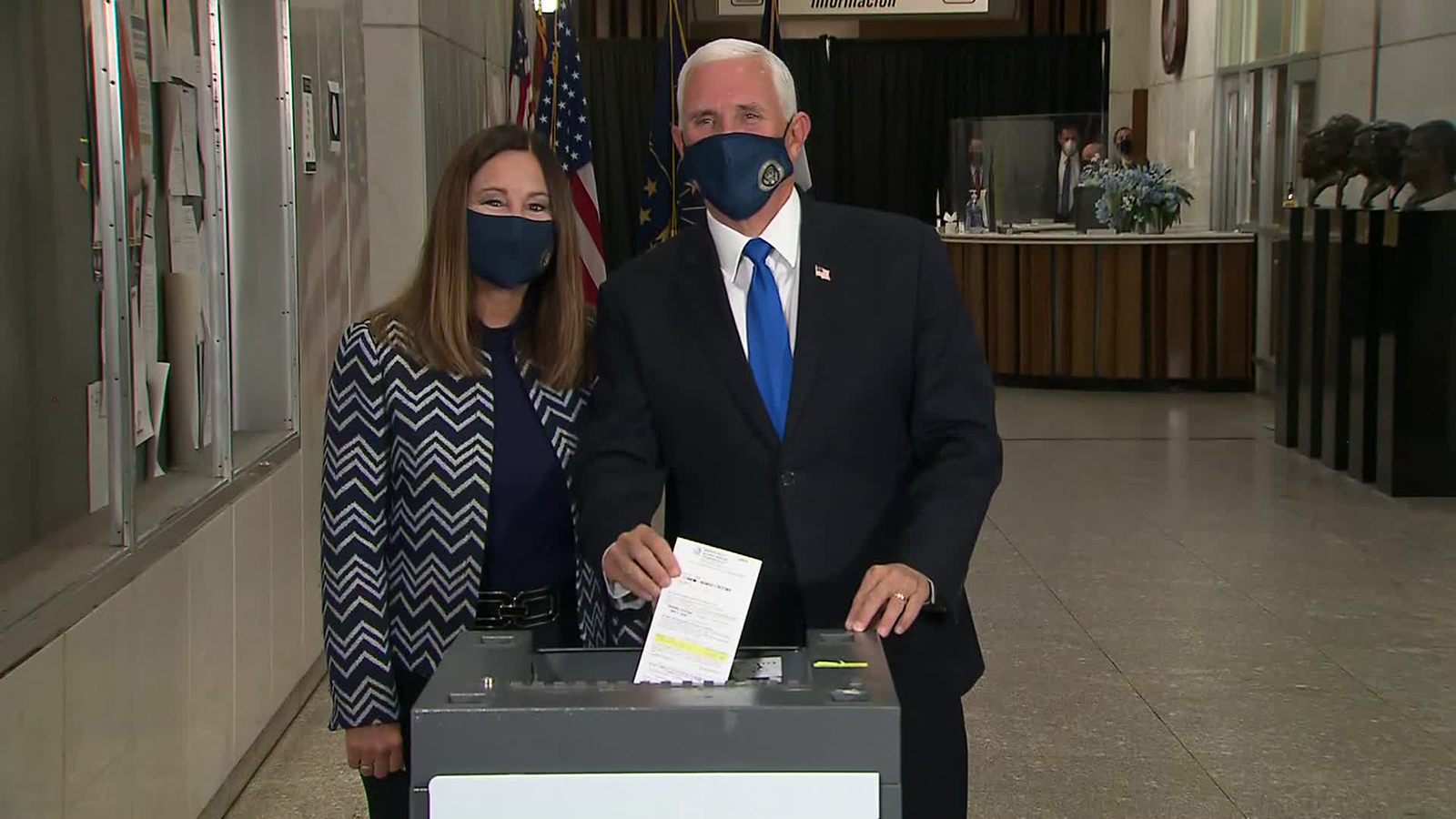 Vice President Mike Pence and his wife Karen Pence cast their ballots in their home state of Indiana today.

“Great honor,” Pence told cameras, “and great to be back home again.”

After voting this morning, Pence is expected to return to the campaign trail with a stop in Swanton, Ohio, at 1 p.m. ET.

Pence will later deliver remarks at a rally in West Mifflin, Pennsylvania.

With just 11 days to go until the election, we want to hear from you.

Tell us your thoughts on the debate and what impact it had on you using the form below.

The second and final showdown between President Trump and Democratic challenger Joe Biden looked much more like a normal debate than their first meeting.

But it probably didn't do anything to change the race's trajectory.

Amid a plethora of lies, Trump hammered Biden for failing to solve problems like institutional racism during his time in the Senate and as vice president, casting him as a typical politician.

Biden lambasted Trump in policy terms, criticizing his handling of the pandemic and his approach to health care, the economy and immigration. But at times, the former vice president got personal — at one point calling Trump "one of the most racist presidents we've had in modern history."

Here are some takeaways from the last 2020 presidential debate:

Trump lowers the temperature: Trump entered Thursday's debate with near unanimous consent among his advisers: cool down. None could say with any confidence whether he would take the advice.

He did, mostly — aided, in part, by a new muting rule he lambasted ahead of the face-off.

Yes, he still issued falsehoods. Yes, he still lobbed personal attacks. Yes, he downplayed the coronavirus — the single biggest crisis facing the country — while taking no responsibility for it. Yes, he insisted that hundreds of migrant children separated from their parents are being well taken care of.

But for most of the face-off, he seemed more subdued and more intent on sticking to a plan. He was even courteous to moderator Kristen Welker of NBC, telling her at one point he approved of her performance.

Trump's wishful thinking: Trump's very first answer — which was meant to state how he would lead during the next stage of the coronavirus — relied instead on looking backward and wishful thinking about a vaccine.

And like many of his answers over the rest of the evening, Trump's central argument seemed to be that things could be a lot worse. Thought it was delivered in a new, less aggressive style, Trump's answer amounted to the same dismissal of the pandemic he's been offering for months — one that voters have largely rejected.

Biden forecasts a "dark winter": Biden offered a much bleaker view of the virus, predicting that a "dark winter" is coming as he accused Trump of denying responsibility for its spread in the United States and squandering months that he said should have been used to accelerate production of protective medical equipment and prepare schools and businesses for reopening.

"Anyone who's responsible for that many deaths should not remain as President of the United States of America," Biden said.

Biden was much more measured than Trump in discussing how he'd handle the virus. He said he would establish national standards for opening schools and businesses and would seek stimulus money to prepare them.