More than 10.5 million Americans have already voted in the general election, according to an analysis of voting information in 41 states from CNN, Edison Research and Catalist.

More than six million of those ballots come from the 16 states rated most competitive by CNN this cycle.

This data does not predict the outcome of any race, as polling around the country shows Democrats prefer to vote early or by mail, and Republicans prefer to vote in-person on Election Day.

With three weeks until the Nov. 3 election, the ballot returns so far represent a small percentage of the expected number of ballots to be cast in 2020. President Trump and Hillary Clinton garnered about 130 million votes combined four years ago.

Pre-Election Day ballots cast nationwide are expected to rise quickly as the country moves closer to November. By the end of the week, ballots will be available in all 50 states and Washington, DC.

Detailed pre-election voting information comes from Catalist, a company that provides data, analytics and other services to Democrats, academics and nonprofit issue-advocacy organizations and is giving new insights into who is voting before November.

“On the first day of early voting yesterday here we had an eight plus hour wait here in this location," county spokesperson Joe Sorenson told CNN.

“To give you some contrast, and about three miles down the road, the longest that ever got it at that location is three hours. This is the headquarters I think a lot of people like to come to headquarters to vote with us,” he said.

Election staff at the elections office headquarters say they saw people already lined up to vote when they arrived at 6 a.m.

In-person turnout for the November election surged more than 40% above the previous record set on the first day of in-person voting ahead of the 2016 November elections, according to a news release from Georgia’s Secretary of State.

Snapchat endorsed Proposition 18, a ballot initiative in California that would allow 17-year-olds to vote in primary elections in the state as long as they'll turn 18 by the general election.

“I’m thrilled to lend Snap’s support to Proposition 18,” Snap CEO and cofounder Evan Spiegel wrote in a letter to the Yes on 18 campaign last week.

“Given our own civic engagement work to empower the next generation of voters, we are grateful for the chance to support your efforts," Spiegel said.

The popular social media platform has maintained a commitment to helping young people learn about the role they can play in democracy since ahead of the 2016 election.

"We want to do everything we can to help make voting more accessible for all groups who have been historically disenfranchised," Rachel Racusen, spokesperson for Snap told CNN in August, noting the platform's reach among 18-29-year-olds.

According to Snapchat, between 300,000 and 500,000 Snapchatters turn 18 each month and its Prop 18 endorsement is the latest step in a string of civic-minded initiatives.

“We believe deeply in the potential of young people to drive positive change,” Spiegel added in his letter to Prop 18. “The future we build today is the reality that we all will live with for decades to come.

President Trump is "having a blast, he's feeling great," as he returns to the campaign trail less than two weeks after being diagnosed with Covid-19, deputy press secretary Brian Morgenstern claimed Tuesday.

"He's well above the length of time that the CDC recommends, and his doctors have cleared him," Morgenstern told Fox Business. "He's certainly not a risk of transmission of the virus, and he's tested negative now, his doctors put that out as well."

Morgenstern said the campaign is ramping up to do "multiple rallies a day."

"As we saw from last night he's got his dance moves ready to go in every swing state from now until the election," he added with a laugh, referring to a moment during last night's rally in Florida when Trump started dancing.

Despite the White House's positive spin on the messaging around Trump's health, the press office continues to ignore specific questions on his condition.

Speaking to reporters very briefly after his appearance on Fox Business, CNN's Kaitlan Collins tried to ask Morgenstern about the President's testing schedule and why the medical team couldn't say the last time Trump tested negative for Covid before his diagnosis.

"I'm not going to get into that," Morgenstern said, cutting off the question, "I gotta head in." He walked towards the West Wing, ignoring further questions.

Early voting began in Texas on Tuesday, with thousands of voters casting their ballots as some locations saw long wait times.

In Harris County, which includes Houston, 50,000 votes were cast by noon local time, according to a tweet from the county clerk, Chris Hollins.

Wait times exceeded 40 minutes in several locations in the county, including the Rice University Football Stadium located in Houston.

In total, 122 early voting locations are open in the Houston-metro area, according to the county clerk's website.

In Tarrant County, which includes Fort Worth and makes up a large part of the Dallas-Fort Worth Metroplex, 22,803 votes have been cast as of 2:30 p.m. ET, according to the Tarrant County Elections Administration.

As in-person early voting gets underway Tuesday in Texas, data from mail-in ballots already returned shows a similar demographic pattern as at this point in 2016.

Texas is one of five states that requires a non-Covid excuse to vote by mail, so this dataset only represents a small sample of the state's electorate.

This detailed pre-election voting information comes from Catalist, a company that provides data, analytics and other services to Democrats, academics and nonprofit issue-advocacy organizations and is giving new insights into who is voting before November.

The returns Catalist have analyzed so far represent a small fraction of the expected number of ballots to be cast in 2020, as President Trump and Hillary Clinton received about 130 million votes combined four years ago.

Meanwhile, a week into early voting in Ohio, a critical battleground that Trump won by about eight percentage points in 2016, here's what the data shows:

Note: This data is not predictive of the ultimate outcome of any race, and polling shows that Democrats strongly prefer voting early or by mail, while Republicans prefer to vote on Election Day. 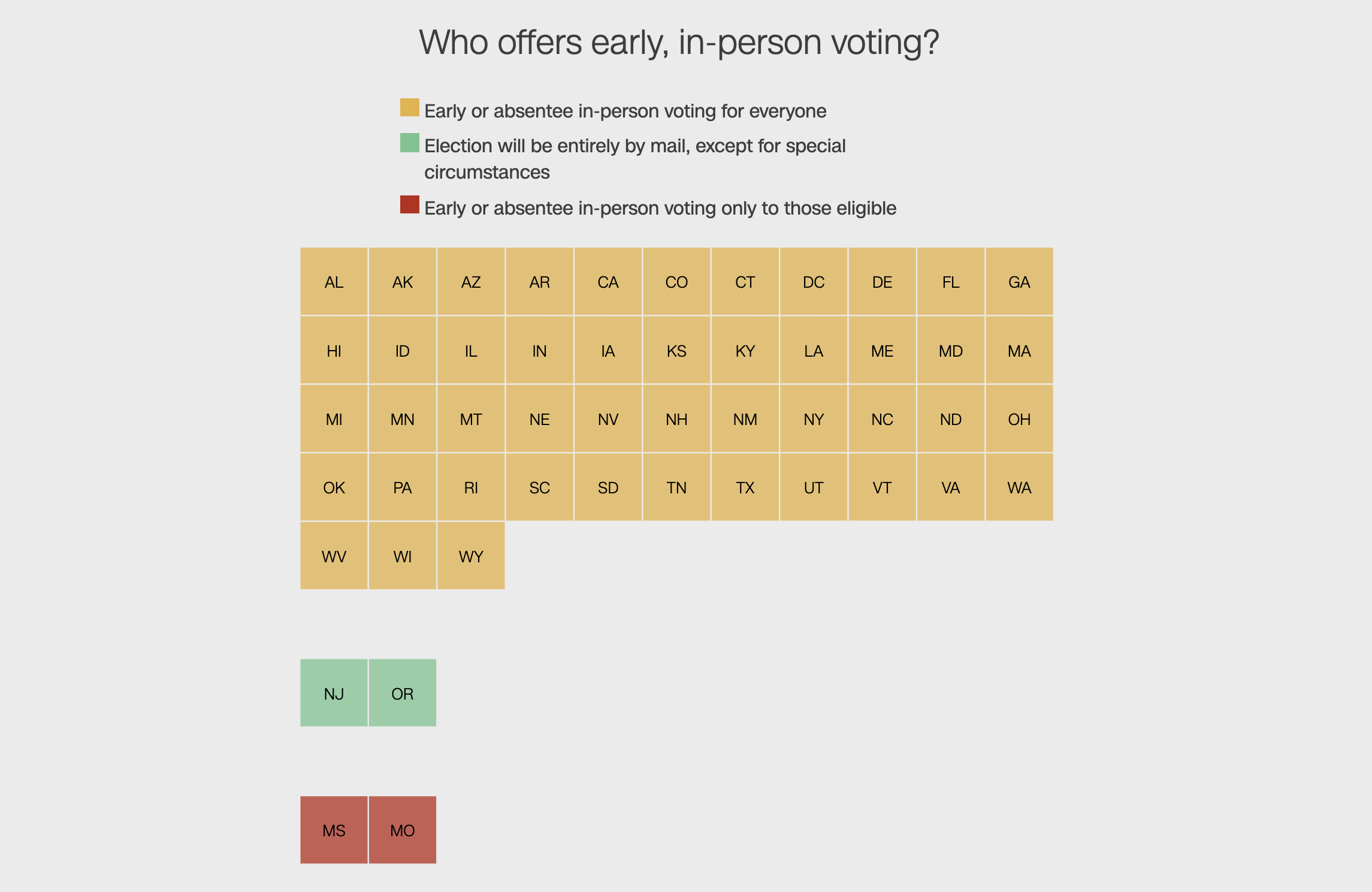 The annual White House Halloween festivities are going ahead “as usual,“ despite the pandemic, a source familiar with the planning tells CNN.

“It is full-steam-ahead,” says the source.

The event draws several dozen families to the White House South Lawn each year for games and trick-or-treating with the President and first lady, who pass out candy. The guests invited to attend are in large part White House staff and military families, as well as local schoolchildren.

Trump and Melania Trump announced on Oct. 2 they had tested positive for Covid-19. White House physician Sean Conley said yesterday that Trump has tested negative for Covid-19 on consecutive days.

A White House official confirms the Halloween event will be taking place, adding it will be “modified” to follow CDC guidelines. The official said those guidelines will include face masks and other protective elements, but did not expand on specifics at this time.

This comes after Democratic presidential nominee Joe Biden told reporters earlier today that his former boss would be “out on the trail."

The aide would not detail how soon Obama would appear on the campaign trail or where he might travel.

Since endorsing his former partner in April, Obama’s work for the former vice president has largely been conducted on digital platforms, participating in virtual grassroots fundraisers with Biden and his running mate Kamala Harris and taping campaign videos with each of the candidates in recent months.

In August, Obama traveled to Philadelphia where he delivered his speech to the Democratic National Convention remotely.