A computer outage on the final day of voter registration in Virginia has taken down the online registration system statewide.

Visitors to the state’s citizens portal website are met with this message: “Due to a network outage the Citizen Portal is temporarily unavailable.”

The site is used for first-time registrations as well as registration updates. It also allows Virginians to apply for an absentee ballot and see the location of their in-person polling place.

Tuesday is the deadline for new voters to register.

Elections department spokeswoman Andrea Gaines did not have an ETA on when it would be fixed but said work to restore the service is underway.

“This morning the Department of Elections was alerted by the Virginia Information Technology Agency that a fiber cut near Rt. 10 in Chester near the Commonwealth Enterprise Solutions Center (CESC) was impacting data circuits and virtual private network (VPN) connectivity for multiple Commonwealth agencies,” Gaines said in a statement.  This has affected the Department’s citizen portal along with local registrar’s offices across the Commonwealth.”

The elections department also allows registration through a paper form that can be mailed in, and must be postmarked today.

Tuesday is the first day of early voting in Texas, and in the lead up, former Texas Rep. Beto O'Rourke teamed up with Stacey Abrams, Julián Castro, Willie Nelson, Bernie Sanders, Oprah Winfrey and Andrew Yang to call Democrats in the state and encourage them to vote early.

The effort was organize by Powered by People, O'Rourke's grassroots organization.

This election is shaping up to be a record-breaker in the number of Americans who will be voting by mail.

Millions have made early ballot requests despite concerns some have about mail-in voting and as President Donald Trump continues to stoke baseless fears about election integrity, though there is no widespread fraud in US elections and voting by mail is very secure.

But what happens after you fill out your ballot and put it back in the mail — or in an official drop-box? According to a CNN review, 45 states and the District of Columbia allow you to track your ballot just like an Amazon package or food delivery.

Here's what you need to know about ballot tracking:

In some cases, this technology can also be used to notify voters when there's an issue with sending or accepting their ballot, giving you notice to fix it before it's too late.

Trump said Fauci’s pitching arm – a reference to his poor first pitch at Nationals’ Park – is “far more accurate than his prognostications.”

Fauci’s recommendations and assessments have largely been in line with public health experts.

But the tweet is particularly ironic given that Fauci has a high approval rating and Trump has used his likeness to appeal to moderate voters.

Earlier this week, Fauci slammed the Trump campaign for using his words out of context in an ad. On Monday, he warned during an appearance on CNN's The Lead that if the campaign featured him in another ad, “That might actually come back to backfire on them.” And, Fauci told the Daily Beast, “By doing this against my will, they are, in effect, harassing me.”

Fauci also said Monday that he would remain in his role regardless of who is President, and despite efforts to drag him into politics.

“This is too important a problem. I’ve devoted my entire professional life to fighting infectious diseases. This is an outbreak of historic proportions, the likes of which we have not seen in 102 years," Fauci told CNBC. “I’m not going to walk away from this outbreak no matter who’s the president.”

Trump has been on another twitter spree this morning, tweeting or retweeting nearly 60 times. Topics include questioning Biden’s mental acuity, a retweet telling Kanye West to “stop playing head games and seeking attention,” a retweet that says Kamala Harris “has no morals,” attacking Debate moderator Steve Scully, praising VP Pence, and at one point retweeting the satirical site, Babylon Bee.

Dr. Fauci reacts to Trump ad: This is disappointing 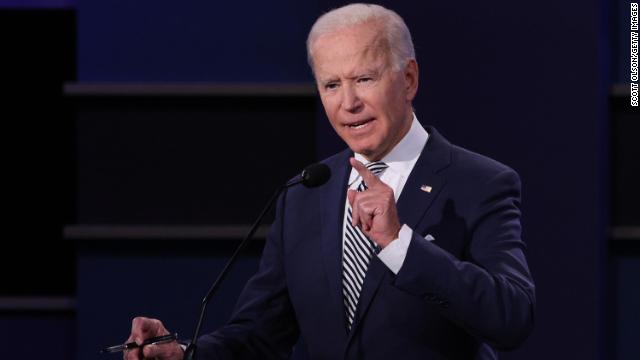 Democratic presidential nominee Joe Biden said Monday that he's "not a fan" of court-packing, providing his clearest position on an issue he has sought to avoid discussing following the death of Supreme Court Justice Ruth Bader Ginsburg.

"I'm not a fan of court-packing, but I don't want to get off on that whole issue," Biden told CNN affiliate WKRC in Cincinnati.

"I want to keep focused. The President would love nothing better than to fight about whether or not I would, in fact, pack the court or not pack the court."

Last week, Biden told reporters he would not address the issue until after the November 3 election, but his comments Monday go further than when he has demurred in his recent answers on the issue following the vacancy on the Supreme Court left by Ginsburg.

Joe Biden’s campaign is out with a new Spanish-language television ad in Texas as the campaign seeks to further court Latino voters in the Lone Star State.

The push comes as Jill Biden is set to visit Texas today on the first day of early voting in the state. Her trip includes a campaign stop in El Paso, a Texas border town with a significant Hispanic population, where she will appear with former Texas Rep. Beto O’Rourke and Rep. Veronica Escobar.

The ad, titled “Somos Alguien,” is similar to a spot released in seven battleground states last month. It criticizes President Donald Trump’s attempts to undo the Affordable Care Act in the middle of the pandemic and highlights his suggestion that coronavirus “affects virtually nobody.”

“Incredible,” a narrator says in Spanish before noting the number of Latinos who have died from the virus. “42,000 lives aren’t nobody. We are grandfathers, grandmothers, uncles, entire families. We are someone, and we’ll prove it.”

The thirty-second spot ends with a graphic encouraging Texans to vote during the state’s early voting period from October 13 to October 30. The ad will run in the Brownsville, Corpus Christi, Dallas, El Paso, Houston, Laredo and San Antonio markets, a campaign official said. The campaign would not detail how much money is behind the new ads, but it has previously announced a $280 million paid media campaign across the country for the fall months.

Recent polls have shown the presidential race in Texas may be competitive four years after Donald Trump won the state by 9 points. In 2016, Latinos made up roughly a quarter of Texas voters – a demographic Hillary Clinton won despite losing the state overall and one with which the Biden campaign hopes to improve its standing.

After a few months of massive fundraising hauls, the Biden campaign has started to spend some money in radio and television advertisements in Texas in recent weeks, though the Texas investments significantly lags behind what the campaign has poured into advertising in traditional battleground states like Florida and Pennsylvania.