A source close to the Commission on Presidential Debates told CNN it has “not ruled out” anything about what changes it may enact in the wake of Tuesday’s chaotic debate.

The source emphasized no decisions have been made by commission members as it considers various options.

Asked specifically about the possibility of cutting off the microphone of a candidate who continually interrupts the opponent, the source responded saying the commission is “considering everything.”

The source told CNN the commission is aiming to announce the changes it will enact within the next 24 to 48 hours because “the quicker we do it” the better it is for all parties involved in the process to know the rules.

So far, no Democrats have met with President Trump's Supreme Court nominee Amy Coney Barrett — though some Democrats have indicated a willingness to do so.

Sen. Patrick Leahy, a veteran member of the panel, suggested he might talk with her but told CNN that the White House reached out to set up a meeting while Ruth Bader Ginsburg was lying in state. He called that "the most tasteless" move — "even coming from this administration."

Senate Minority Whip Dick Durbin, a member of the Judiciary Committee, had said he'd meet with her.

Asked why he hasn't met her yet, Durbin said, "Haven't been asked."

Durbin said the White House made a "general invitation that we'd like to meet with everybody." But he added: "They haven't contacted our office."

Sen. Sheldon Whitehouse, who also sits on the committee, said he's still "mulling" whether to meet with her.

The White House would not give a declarative statement denouncing White supremacy, instead pointing to past comments President Trump has made, and insisted that he did not misspeak as the fallout from Trump’s debate performance continued on Thursday.

In a tense exchange with a Fox News reporter, White House press secretary Kayleigh McEnany chose instead to rely on past quotes from Trump when asked, repeatedly, to denounce White supremacy.

McEnany went on to read several Trump quotes from the past, telling reporters she had “an entire list of these quotes I can go through with you.” But she was pressed, repeatedly, to make a clear statement that would put the issue to rest.

“Can you right now denounce White supremacy and the groups at espouse it?” a reporter asked, again.

“I just did,” she answered.

“I just don’t understand why you knew you were going to get these questions and you don’t have a statement ready to just say, ‘we do unambiguously denounce these views,’” Collins told McEnany.

McEnany responded by attacking the media, and CNN in particular.

“When the President denounced White supremacy and said ‘sure,’ no, he did not misspeak,” McEnany said. She ignored clear questions about if the President has spoken with Scott.

Postmaster General Louis DeJoy said he has issued a directive to allow for additional resources to make sure election mail receives top priority from the US Postal Service.

“The U.S. Postal Service’s number one priority between now and the November election is the secure, on-time delivery of the nation’s Election Mail. The Postal Service, our unions, and the more than 630,000 postal employees are united in delivering on this sacred duty,” DeJoy said in a statement.

Changes that DeJoy made to the Postal Service sparked outrage and legal action over concerns they could slow down the timely delivery of mail-in ballots, which are a bigger part of these year’s election due to the coronavirus pandemic.

Federal judges across the country have ordered USPS to undo some of DeJoy's changes and prioritize election mail, largely agreeing with Democratic attorneys general who argued that the Trump administration was using USPS to undermine mail-in voting.

Amid an announcement from the Commission on Presidential Debates that “additional structure” would be added to forthcoming debates after Tuesday’s debate, White House press secretary Kayleigh McEnany couldn’t definitively say whether President Trump would commit to participating with new rules.

“The President made clear his view on that yesterday that he thinks the only way there's a fair debate is a change in the moderator and a change in the Democratic nominee,” McEnany said during Thursday’s press briefing.

McEnany suggested Trump may not be amenable to certain rules, which the commission has yet to fully lay out.

“He wants to debate, he plans on being at the debate, but he wants the rules to be fair and wants a fair exchange and doesn't want rules that cover for certain candidates’ inability to perform well,” she said.

The White House and Republicans are bracing for questions about Judge Amy Coney Barrett’s background and religion, and expect Democratic vice presidential nominee Sen. Kamala Harris to play an outsized role in the confirmation hearings, White House chief of staff Mark Meadows said on a video call sponsored by the Article III project on Thursday.

Barrett's confirmation hearings are set to begin on Oct. 12, according to Senate Judiciary Chairman Lindsey Graham.

Meadows said the White House has already set a rapid response team, and that “anything that comes forward will be met with a quick and professional response.”

“I thought we had gotten beyond this when we started using religion as a litmus test for almost anything when we elected John Kennedy as president,” Meadows said. “It’s sad that often times we look at faith as being somehow the focus of any nomination process, and so to suggest that something is myopically focused on by anybody who uses it, I don’t think it sits well with the American people."

In Barrett’s last confirmation hearing in 2017, Sen. Dianne Feinstein sharply questioned whether the judicial nominee could separate her Catholic views from her legal opinions.

"The conclusion one draws is that the dogma lives loudly within you," Feinstein pointedly said. "And that's of concern when you come to big issues that large numbers of people have fought for years in this country."

The exchange became a rallying cry for Republicans — and quickly put Democrats on the defensive as the GOP accused them of creating a religious litmus test for President Donald Trump's nominee to sit on the 7th US Circuit Court of Appeals.

Democrats said the exchange was in reference to Barrett's own writings on the topic that had prompted questions from both parties — and concerns from progressives that she would chip away at abortion rights.

“To suggest that should enter into any confirmation process is in my opinion something that should not be a part of the confirmation process,” Meadows said Thursday. “We sometimes try to draw a whole lot of inferences based on someone’s faith, and for me, whether you do that for in this case Judge Barrett, her Catholic faith, or if you had done it for Judge Ginsburg for her Jewish faith, neither of those would be appropriate.”

The chief of staff was also asked about the junior Senator from California, Sen. Kamala Harris, who had her own tense exchanges with Justice Brett Kavanaugh during his confirmation hearings. Harris is now running to be vice president.

“We’re preparing for that,” he added.

CNN has reached out to the campaign and to the senator’s Capitol Hill office for comment.

The Trump administration is considering putting up billboards of immigration violators, an unprecedented move in lockstep with the President's law-and-order message ahead of the election, according to two sources familiar with the proposal.

The billboards would be put up by Immigration and Customs Enforcement — the enforcement arm of the Department of Homeland Security — in at least one city and would call attention to immigrants who have committed crimes and been released by local authorities.

It's unclear what the billboards will look like and at what cost. If the plan proceeds, it seems intended to single out sanctuary jurisdictions and stoke fear within those communities.

The Department of Homeland Security, along with the Justice Department, have been criticized for efforts that look political to boost Trump amid a contentious election season.

But billboards for the purpose of singling out violators raises questions about what purpose it really serves. "How are they getting funding for it? How does that advance their mission?" said John Sandweg, former acting ICE director. "Running billboards, it's political messaging."

Hotlines to solicit tips or campaigns to recruit personnel are common, Sandweg noted, but those are more clearly linked to helping advance the agency's enforcement mission. 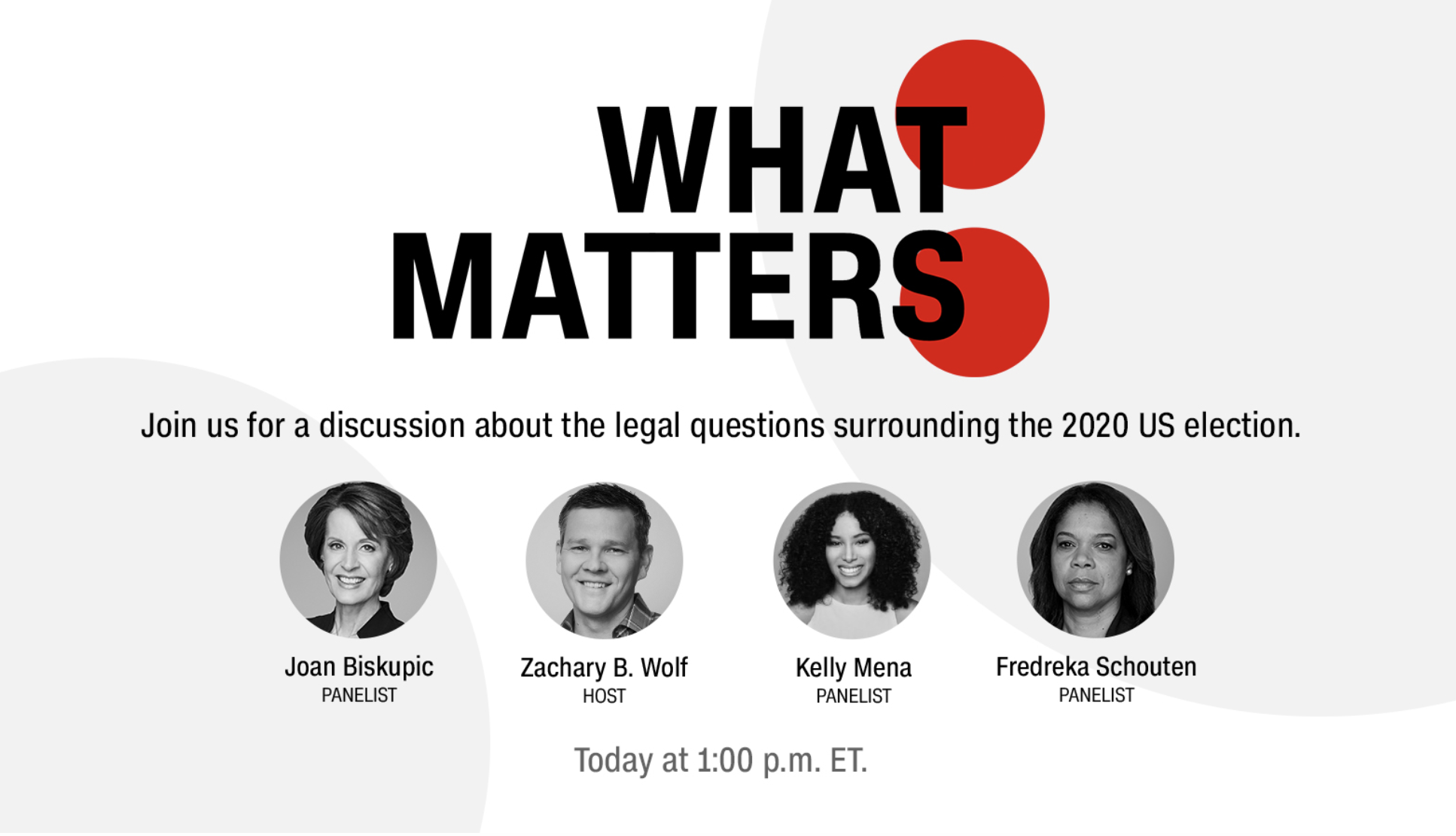 Join CNN at 1:00 p.m. ET for a live conversation on the legal questions surrounding the 2020 US election. The panelists will be answering questions submitted by viewers.

You can submit questions here:

The event is part of the What Matters series, a conversation with CNN's experts about the issues shaping the 2020 election.

President Donald Trump lied about a wide variety of topics — including health care, the economy and the coronavirus pandemic — during Tuesday's presidential debate. But he was especially dishonest on the subject of voting by mail.

Almost every single claim Trump made during the debate segment about the integrity of the election was inaccurate in whole or in part.

His Tuesday performance was just the latest component of a systematic, months-long disinformation campaign he has waged to try to undermine confidence in mail-in voting. Let's go through 11 of his Tuesday claims item by item:

Mail voting and fraud: Trump said, "As far as the ballots are concerned, it's a disaster." He went on to say that "a solicited ballot" is "OK" but an "unsolicited" ballot is not. And he added, later, that "It's a rigged election."

Voters in nine states and the District of Columbia are being sent mail ballots without needing to request them. However, five of those states — Colorado, Oregon, Utah, Hawaii and Washington — have held their elections primarily by mail since before the pandemic, and there has not been any significant incidence of fraud.

Since Trump is alleging that Democrats are using mail voting to try to rig the election, it's worth noting that Utah is governed by Republicans; Vermont has a Republican governor, though a Democratic-controlled Legislature; and the top election officials in Nevada, Oregon and Washington are all Republicans. It's also worth noting that Republican election officials around the country have emphasized that mail voting is fair and secure.

A Democratic primary in New York: After Biden said nobody has established that mail voting is a fraudulent process, Trump replied, "It's already been established. Take a look at Carolyn Maloney's race in Manhattan."

Facts First: This is false. There has been no evidence to date of fraud in this primary in New York's 12th District. There was a legal dispute about the fact that a large number of ballots were rejected for non-fraud reasons. And while the ballot-counting was slow because the state has had administrative problems -- ranging from insufficient staffing to outdated technology -- in trying to count a much larger than usual number of absentee votes, a slow count is not evidence of anything nefarious.

The candidate Maloney defeated, Suraj Patel, tweeted Tuesday night that "Trump lied about what happened here," saying that the issue in the race was "disenfranchisement" of voters whose ballots had been rejected, "not voter fraud."

Read more of the fact checks below: 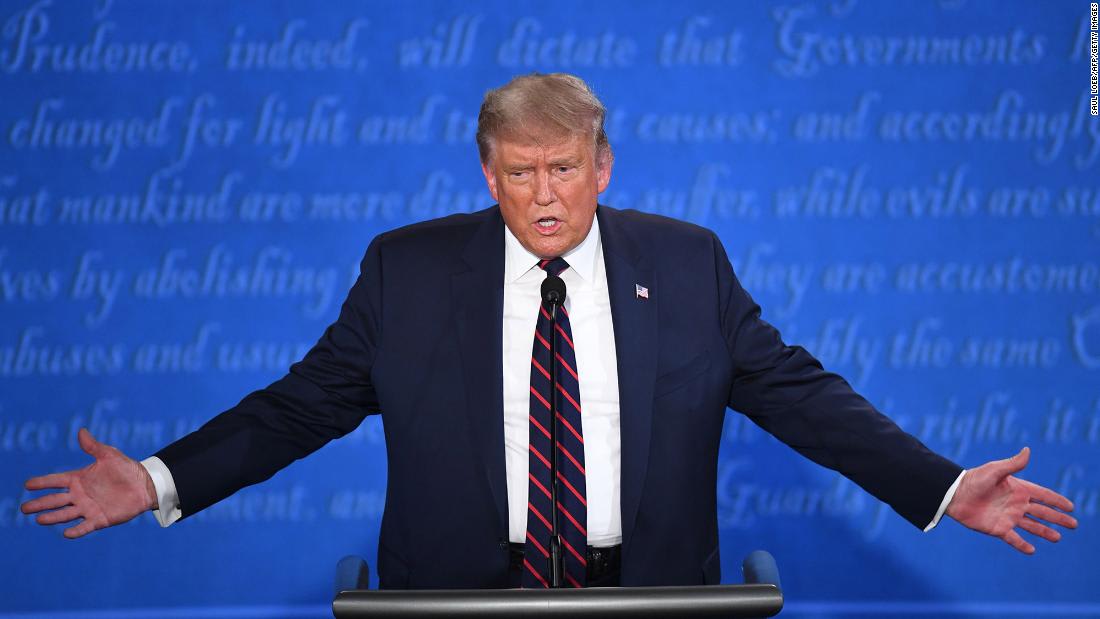 Fact check: Almost every single one of Trump's debate claims about mail-in voting was wrong