Latest on 2020 election and SCOTUS battle

As the US nears 200,000 coronavirus deaths, journalist Bob Woodward said he has "never seen anything like" Trump's mishandling of coronavirus and his inaccurate assessment of the pandemic.

"Two hundred thousand Americans dying. I think in covering nine presidents, I've never seen anything like it," Woodward told Jeff Zucker, the chairman of WarnerMedia News and Sports, at the Citizen by CNN 2020 conference.

"The visitation of the medical nightmare on the American population is staggering, stunning. It's on his head, and he did not do enough. He just didn't," Woodward said.

Woodward said Trump has failed to build a team around him, and that he "harasses people" and "attacks people who work for him."

"This impulse decision-making, I've never seen anything like it in the presidency or any other institution where it's this one man band and he's going to say and do exactly what he wants, often giving no warning to his closest aides," Woodward said.

Speaking to "Fox and Friends" yesterday, Trump gave himself a "A+" on his handling of the pandemic. Woodward said the President's push to paint a better picture of the situation is key to his campaign efforts. This also includes his focus on filling Justice Ginsburg's Supreme Court seat.

"He is obsessed with reelection, we've seen with the SCOTUS issue he has shifted the issue." "this is an issue that is very important to his base."

Some background: President Trump admitted he knew weeks before the first confirmed US coronavirus death that the virus was dangerous, airborne, highly contagious and "more deadly than even your strenuous flus," and that he repeatedly played it down publicly, according to Woodward in his new book "Rage."

"This is deadly stuff," Trump told Woodward on Feb. 7.

In a series of interviews with Woodward, Trump revealed that he had a surprising level of detail about the threat of the virus earlier than previously known. "Pretty amazing," Trump told Woodward, adding that the coronavirus was maybe five times "more deadly" than the flu.

Asked during CNN's Citizen conference to compare the audio tapes of President Richard Nixon during Watergate and Trump, Woodward responded: "As a reporter for The New York Times said, it's almost, in the case of Trump, as if Nixon had packaged up all his secret tape recordings showing his criminality and FedEx'ed them to me."

The event will feature speakers and panel conversations moderated by the network’s top anchors and journalists, discussing issues that matter, the motivations to vote and the importance of being informed and engaged in the political process. Learn more here cnn.com/citizen

Here's a look at the event's schedule: 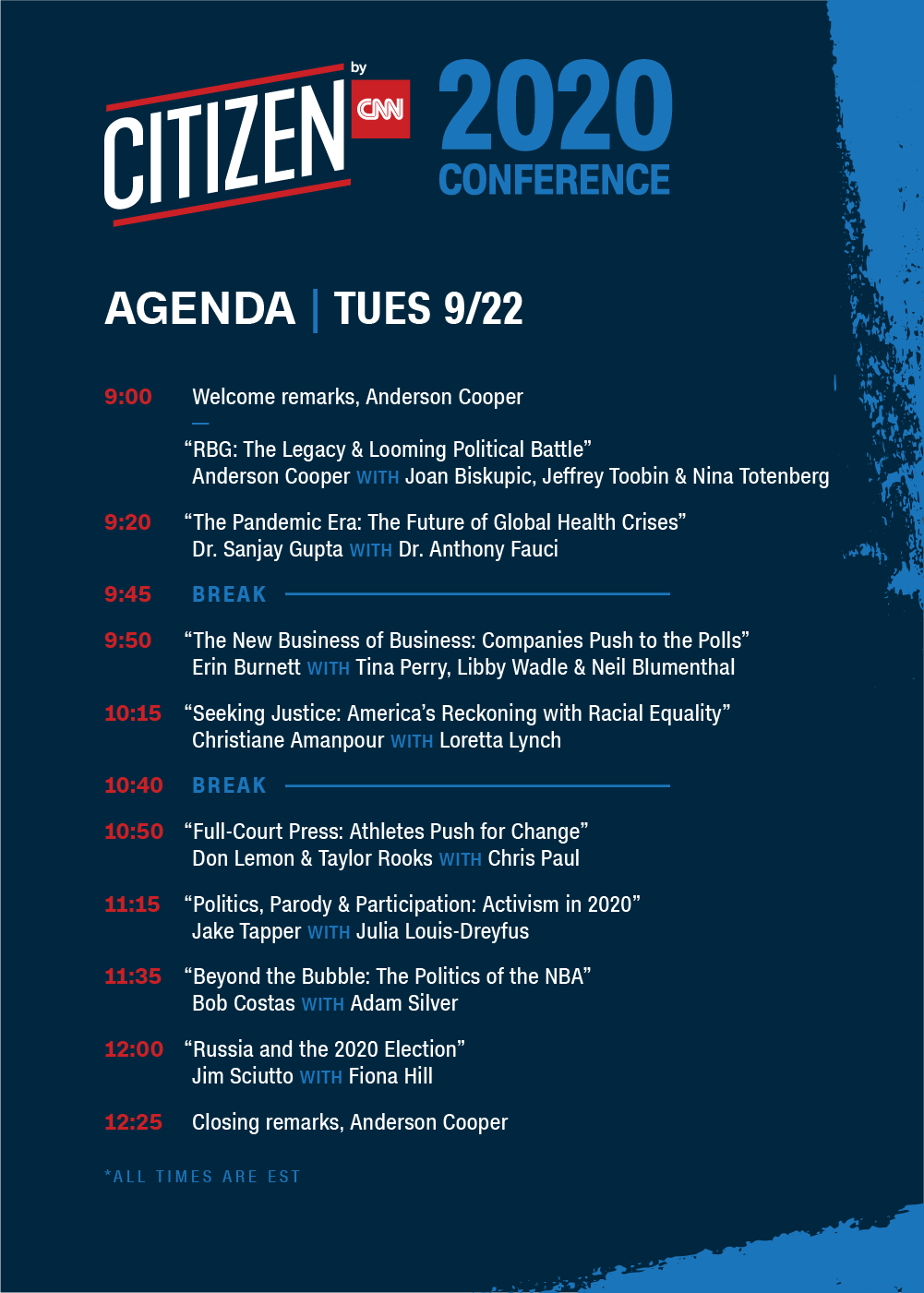 Democratic presidential nominee Joe Biden deflected last night when asked if he would pack the Supreme Court, arguing that it "will shift the focus" of the national conversation, which is what he said President Trump wants.

"It’s a legitimate question, but let me tell you why I’m not going answer that question," he told local CNN affiliate WBAY in Green Bay, Wisconsin. "Because it will shift the focus, that’s what he wants, he never wants to talk about the issue at hand and he always tries to change the subject. Let’s say I answer that question, then the whole debates gonna be about what Biden said or didn’t say, Biden said he would or wouldn’t."

Some background: During the primary, Biden was consistent in his opposition to court packing. He said during a Democratic presidential debate in October that he "would not get into court packing," adding, "We had three justices. Next time around, we lose control, they add three justices. We begin to lose any credibility the court has at all."

He reiterated his position and this rationale when a voter asked him about his position on expanding the court during a town hall in Iowa later in December. And he told a local Iowa outlet last year that Democrats would "live to rue that day" if they began to expand the court.

President Trump has already spoken with some of the women on his shortlist to fill Ruth Bader Ginsburg’s seat on the Supreme Court, the President said Monday, adding that he’d like to see a vote on his pick before the election.

Trump, who also told reporters at the White House he would announce the pick “Friday or Saturday,” said “five women are being vetted and looked at very carefully,” some of which he spoke with “today and yesterday,” and the day before.

Asked if he would meet with all the women in person, Trump responded, “I don’t know, I doubt it. But we’ll meet with a few probably.”

One of those women may be Barbara Lagoa, who lives in the Miami area where Trump will visit this weekend.

“I may,” Trump said, when asked if he would meet with Lagoa. “She’s a – highly thought of. Got a lot of support. I’m getting lot of phone calls from a lot of people. I don’t know her but I hear she’s outstanding.”

“We have plenty of time to do it. I mean there’s really a lot of time,” he said. “Let’s say I make the announcement on Saturday. There’s a great deal of time before the election. That’ll be up to Mitch and the Senate. But I’d certainly much rather have the vote. I think it sends a good signal. And it’s solidarity and lots of other things.”