A protest group set an American flag on fire at Lafayette Park across from the White House.

A press release from a protest group announced plans to set a US flag alight, and noted that protester, Gregory “Joey” Johnson and members of the Revolution Club and the Revolution Tour were demonstrating against President Trump and his "Salute to America" event.

It is not known if Johnson was one of those being held by police.

Trump was scheduled to speak at the Fourth of July event at 6:30 p.m. ET today, but the event has been delayed (Note: We're not sure how long the delay will last.) 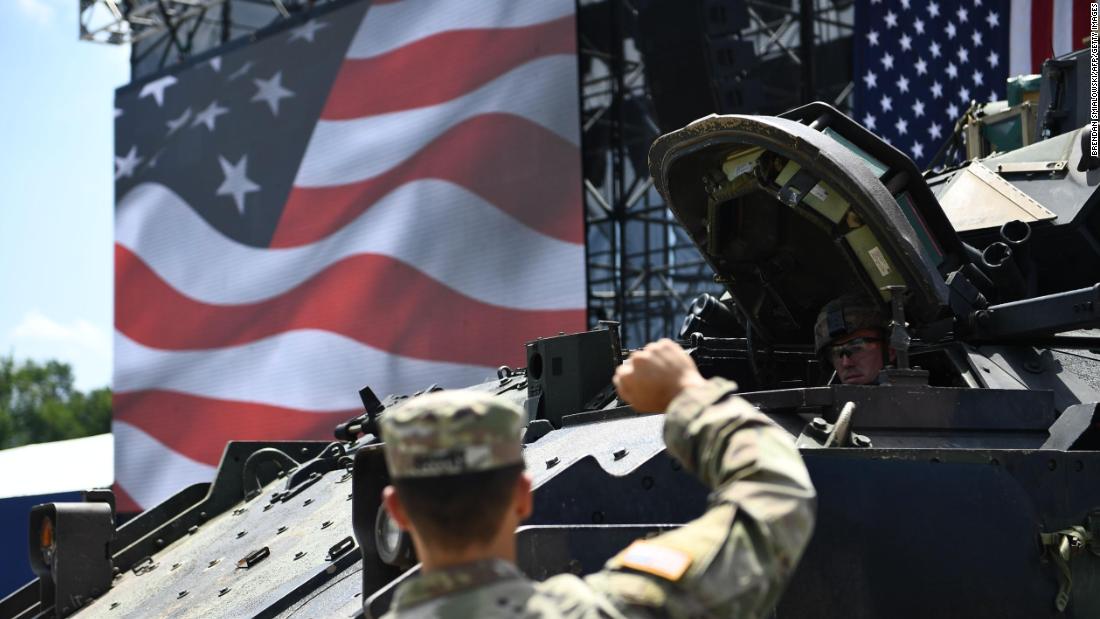 President Trump still plans to deliver remarks at his "Salute to America" event tonight, despite an announcement there would be a delay in the program.

Trump was originally scheduled to deliver an address at 6:30 p.m. ET.

White House press secretary Stephanie Grisham said there has not been a bad weather call and added that the President would travel the short distance to the Lincoln Memorial.

What we know so far: We don't have details about the length of the delay, but there is severe weather in the Washington area and low cloud cover.

Nearly $2.5 million will be redirected from the National Park Service to help cover the costs of President Trump's July 4 event in Washington, DC.

This money is usually spent on things that would keep the parks up and running and are "primarily intended to improve parks across the country," The Washington Post reported Tuesday.

The Post said the use of the funds was confirmed by two unnamed individuals familiar with the agreement.

The paper, which said administration officials "have consistently refused to say how much" the event will cost, noted that former National Park Service deputy director Denis P. Galvin said that typically, the July 4 celebration on the mall comes at a cost of about $2 million for the agency. According to the Post, the $2.5 million redirected by the park service "represent just a fraction of the extra costs the government faces" for the event.

Citing budget documents, the paper also said the nearly $2.5 million from the agency "amounts to nearly 5 percent of the funds that less-profitable parks used last year for upgrades."

Could cross a campaign line: According to the Post, Brendan Fischer, the federal reform director for the Campaign Legal Center, said the President's speech could cause issues related to the use of the NPS funds as "federal appropriations law prohibits using public money for political purposes."

If Trump "refers to some of the 2020 presidential hopefuls, or polling related to the race, Trump's reelection campaign may be required to reimburse the U.S. Treasury," the paper said.

"'The content of the event, and the nature of the event, is probably the determining factor,' as opposed to donors getting to see Trump up close," Fischer told the Post, referring to the the fact that the President's political allies received some of the VIP tickets to the celebration.

President Trump's political allies received some of the VIP tickets to today's Fourth of July spectacle on the National Mall, according to people familiar with the event.

While the public will be able to view the event from afar, the areas closest to Lincoln Memorial, where Trump will speak, are reserved for ticket holders.

The White House has declined to say how the tickets will be allocated, or even how many will be given out. An official said only that "VIPs, friends and family, and members of the military" are getting access to the cordoned-off area.

But at least some of those with the special access appear to be Trump's political boosters.

The "Salute to America" will occur on the National Mall rather than the White House, which is where presidents have celebrated the Fourth of July in the past.

Tickets required: The Secret Service said in a statement last week it was responsible for securing the area closest to the Lincoln Memorial during the event.

"Tickets are required for this event and individuals will be required to undergo an additional level of security screening to include magnetometers," the agency said.

The DC National Guard has activated 900 members to provide traffic control and security on the streets and in the Metro subway system in Washington, DC, according to a military official.

However, the number is nearly triple the typical 300-person activation for the Fourth of July because of the need to have additional personnel for President Trump’s event.

More people are expected to be on the streets as a result of the Fourth of July celebration. They'll be traveling through the subway system, which is a larger footprint for security teams to cover, the official said.

While President Trump is setting the bar for large crowds on the National Mall tonight, it’s worth noting that the National Park Service will never provide a crowd count for the festivities.

Here's why: Congress prohibits the Department of the Interior and its agencies from using its funds to crowd count. This has been in place since 1997 — well before Trump lamented coverage of his 2017 Inaugural crowd.

The 1997 appropriations bill for the Department of the Interior includes a provision saying:

“The Committee has provided no funding for crowd counting activities associated with gatherings held on federal property in Washington, D.C. If event organizers wish to have an estimate on the number of people participating in their event, then those organizers should hire a private sector firm to conduct the count.”

The backstory: The provision came to be following the 1995 Million Man March, when Louis Farrakhan threatened to sue the National Park Service for estimating the crowd at 400,000, according to Jason Alderman, who wrote it as an aide to then-Rep. Sidney Yates.

“At a time when national parks were woefully underfunded with billions of dollars in deferred maintenance (sadly little has changed 20 years later) it felt like a particularly poor use of taxpayer money to have the Park Service count crowds at events on the National Mall,” Alderman wrote in the Huffington Post in 2017, adding, “I was simply motivated to free the Park Service from being a political punching bag and allow them to divert those resources spent on counting to instead be used for improving the parks under their care.” 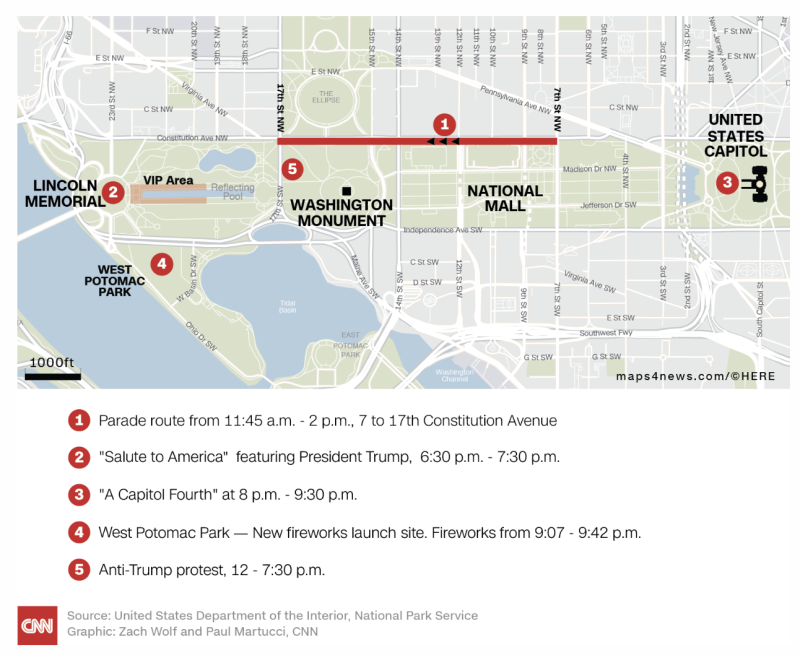 The National Independence Day parade just wrapped up in Washington D.C., but there are still a lot of festivities to come.

Here's a look at what you can expect to happen tonight:

Crowds started gathering at the National Mall ahead of President Trump's "Salute to America" event tonight.

There was a sculpture depicting Trump holding a cell phone while on a toilet.

People went through a security checkpoint.

And a baby Trump balloon made an appearance.