Our live coverage of President Trump's remarks has ended. Scroll through the posts below to see how it unfolded or read more about it here.

While he avoided tying Democratic politicians to the socialist government in Venezuela as he has in the past, President Trump briefly turned his speech on Venezuela to domestic politics, vowing the US will "never be a socialist country."

"And to those who would try to impose socialism on the United States, we again deliver a very simple message: America will never be a socialist country," Trump said toward the end of his speech in Miami on Monday.

"We are born free and we will stay free, now and forever," he added.

In closing, the President tailored his message about the triumph over socialism to the community of Latin American immigrants in the Miami area. 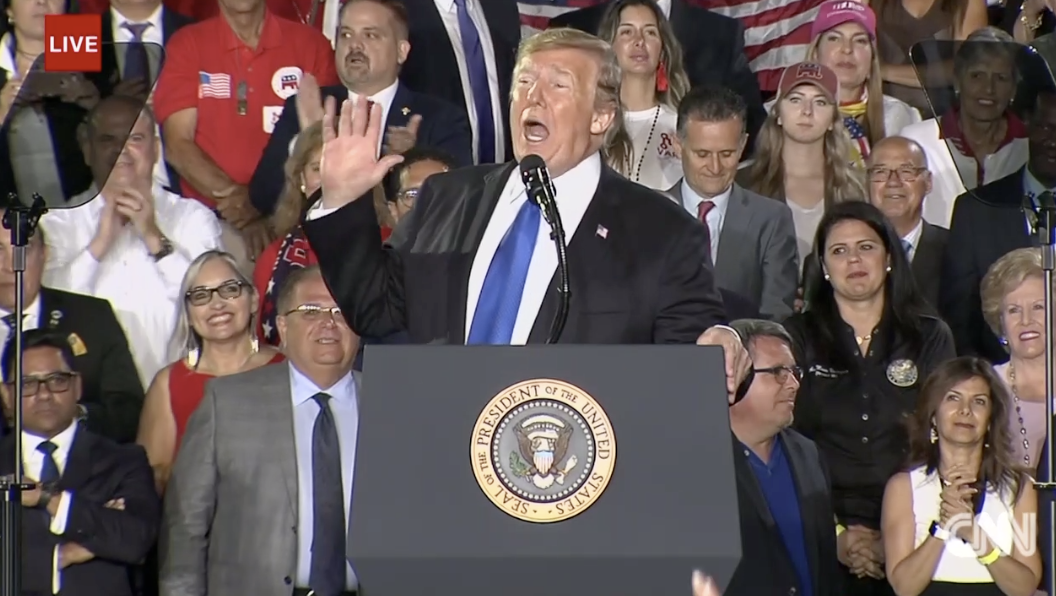 President Trump offered a warning directly to the supporters of Venezuelan President Nicolás Maduro regime: “The eyes of the entire world are upon you.”

Trump warned, seemingly to troops loyal to Maduro, “you must not follow Maduro’s orders” to block humanitarian aid. He also warned against causing harm to the Venezuelan people or interim president Juan Guaido.

“We seek a peaceful transition of power but all options are open,” Trump said to thunderous applause.

“You will lose everything,” he warned. 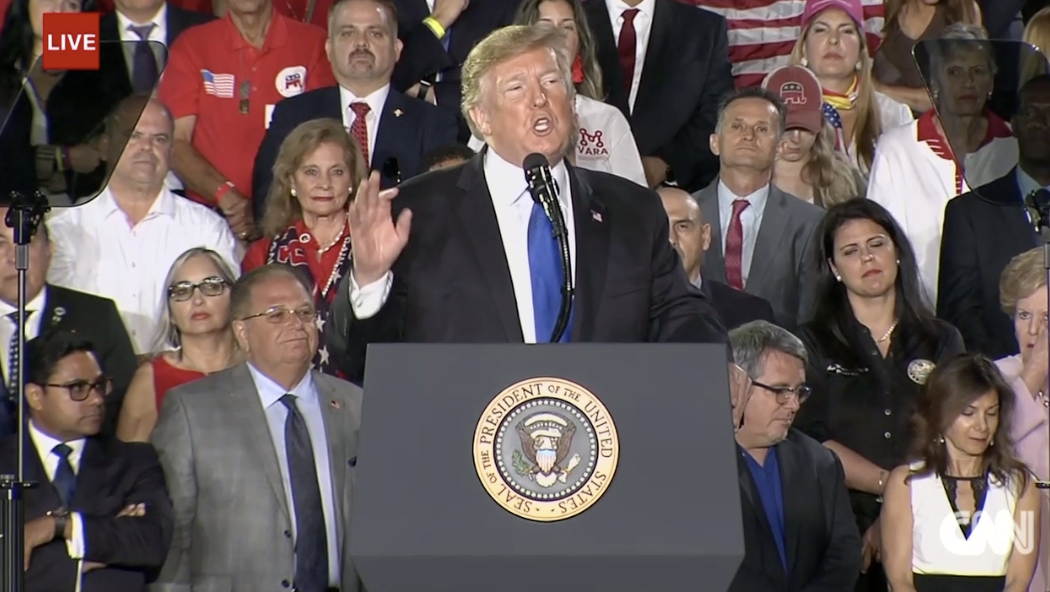 President Trump lambasted Venezuelan President Nicolás Maduro for preventing humanitarian aid from entering the country and accused him of being a "Cuban puppet."

Trump noted that there are "truckloads" of humanitarian aid stalled at the Venezuelan border "waiting to help millions and millions in need."

"Unfortunately dictator Maduro has blocked this life-saving aid from entering the country. He would rather see his people starve than give them aid."

Trump pointed the finger not just at Maduro, but at the "small handful at the top of the Maduro regime" who he accused of plundering the nation.

"We know who they are and we know where they keep the billions of dollars they have stolen," Trump said.

Trump also warned that Venezuelan military officials who continue to back Maduro are "risking their future." 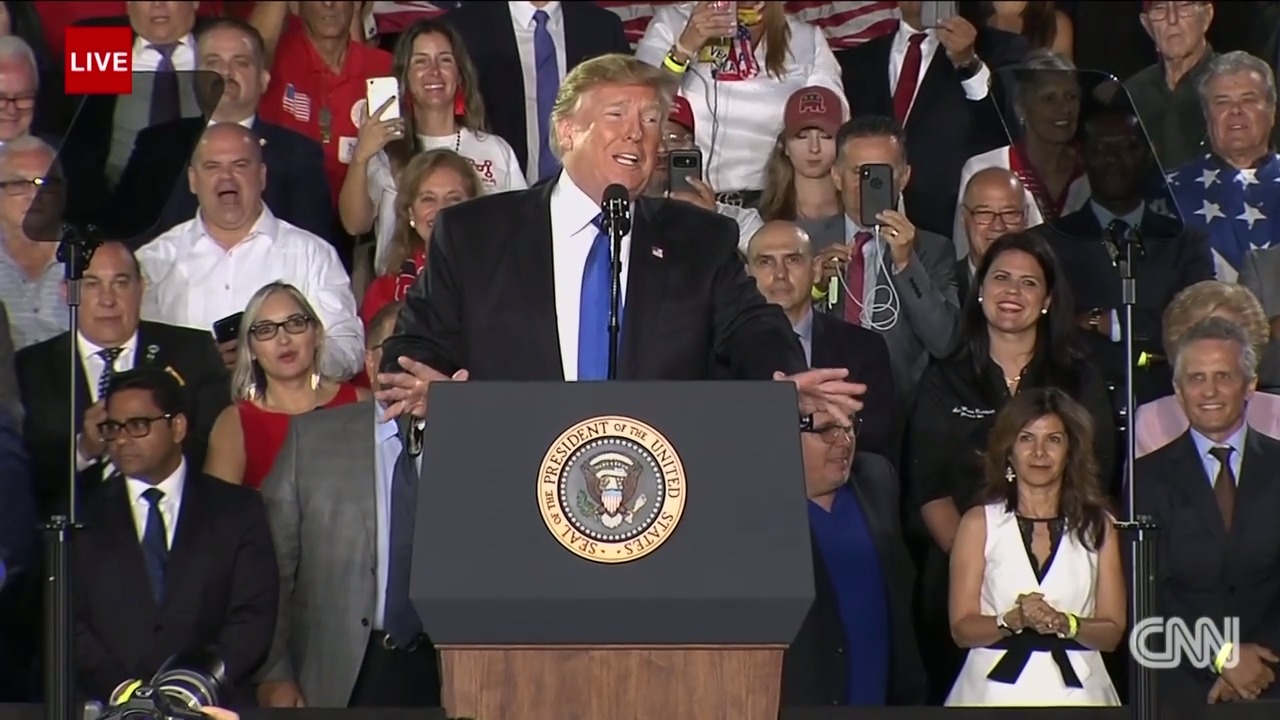 President Donald Trump railed against socialism during a speech on Venezuela, echoing sentiments in his State of the Union address and remarks at a recent El Paso campaign rally.

“Socialism by its very nature does not respect borders. It does not respect the boundaries or the sovereign rights of its citizens or its neighbors. It’s always seeking to expand, to encroach, and subjugate others to its will,” he told the crowd in Miami.

Trump vowed that “the twilight hour of socialism has arrived in our hemisphere.”

“The days of socialism and communism are numbered, not only in Venezuela, but in Nicaragua and in Cuba as well,” he said, adding that both countries have “such unbelievable potential.”

During his SOTU speech, Trump took these sentiments a step further: “Here, in the United States, we are alarmed by new calls to adopt socialism in our country. America was founded on liberty and independence -- not government coercion, domination and control.”

Juan Guaidó just appeared at the Miami event via video and made remarks. Here’s an English translation from the pool:

"I want to take this opportunity and venue to thank the people of the United States and President Trump for his determination and clear leadership in support of democracy and just causes in response to what is happening now in Venezuela. The humanitarian tragedy is one which keeps families separated because of the migration and one that does not allow us to nourish our children and that does not allow our elderly to obtain medicines.
Now there is a debate between the democracy and dictatorship — one between life and death. Today this fight is existential. The fight that we Venezuelans have begun after years where a majority of us have mobilized people and civic groups to obtain freedom. In this process, this international coalition and the determined support of the international community has been fundamental in this process and for democratic progress, and to allow the entry of humanitarian assistance that will save lives.
This is a moment for Venezuelans where we are determined to reach decisive moments in which we should pressure the dictatorship that has done away with rule of law, maintains political prisoners, and has persecuted many Venezuelans.
We must take advantage of this opportunity. The moment is now for change in Venezuela with determination and pressure from within Venezuela. With a peaceful mobilization and international cooperation, it will allow Venezuela to become free and a friend of everyone in the region. Many thanks to the state of Florida that has taken in so many Venezuelans and opened its door. Our thanks to President Trump and all Americans who are determined and decidedly supporting freedom. May God bless." 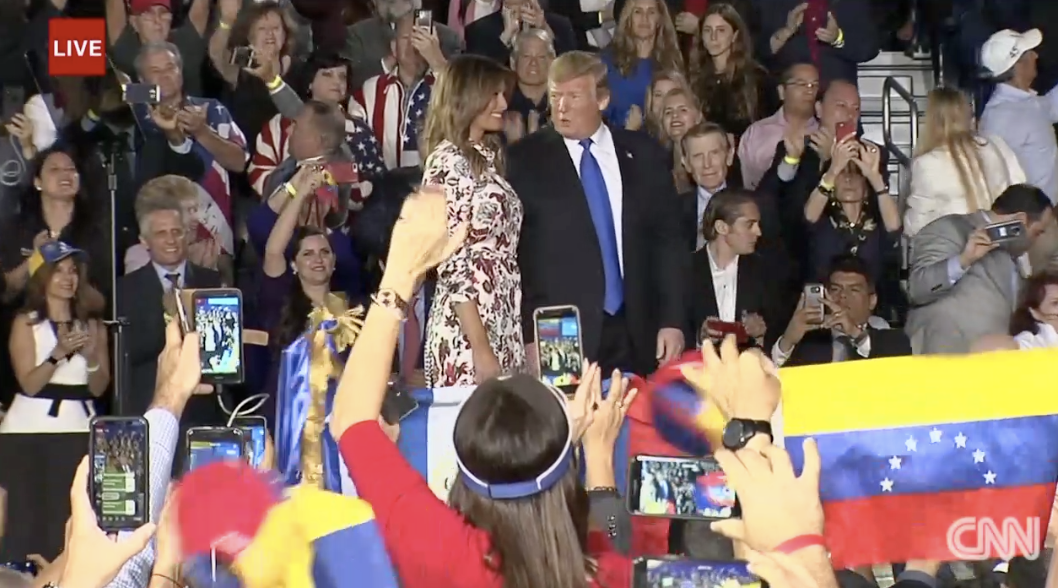 Melania Trump opened the event by speaking about the crisis in Venezuela.

"Many of you in the room know what it feels like to be blessed with freedom after living under the oppression of socialism and communism," she said.

She went on to say that Americans are standing by the people of Venezuela.

"There is hope, we are free and we pray together loudly and proudly that soon the people of Venezuela will be free as well," the first lady said.

Russia, China and Cuba continue to recognize the government of Maduro, who retains control over the country's security forces.

Since recognizing Guaido, Trump has ratcheted up his rhetoric against Maduro's regime, even making it a point in his State of the Union speech earlier in February.

"We stand with the Venezuelan people in their noble quest for freedom — and we condemn the brutality of the Maduro regime, whose socialist policies have turned that nation from being the wealthiest in South America into a state of abject poverty and despair," Trump said.

What the protests are all about: Those demonstrations come nearly three weeks after a stand-off began between Maduro and opposition leader Juan Guaido.

The 35-year-old National Assembly leader has rejected Maduro's election last year as illegitimate, and declared himself the interim President of Venezuela. To the delight of his supporters, many Western nations and regional neighbors have recognized Guaido as the country's interim leader.

Maduro has remained defiant in the face of domestic and international pressure. And critically, the Venezuelan military remains loyal to Maduro.