President Trump, asked about a possible "plan B" if Supreme Court nominee Brett Kavanaugh's conformation falls through, said he doesn't want to talk about that possibility.

"I don't want to talk about plan B," Trump said. "I hope he gets approved."

Trump said he has an "open mind" when it comes to the ongoing FBI investigation.

"Certainly if they find something, I'm going to take that into consideration," Trump said.

Then, trump continued to defend Kavanaugh: "I think he's an outstanding person and has been treated horribly." 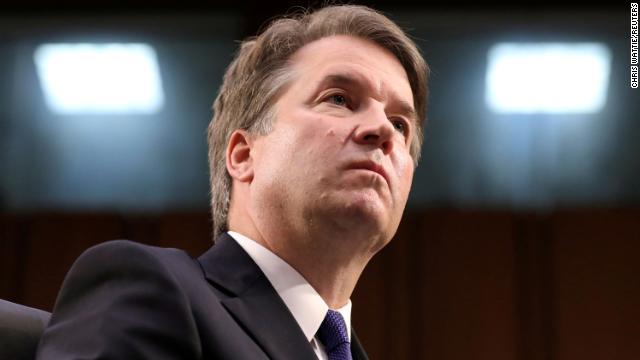 President Trump said Monday his Supreme Court nominee Brett Kavanaugh should be interviewed by the FBI if it helps lawmakers make a decision on his nomination.

"I think so," Trump said when asked if the FBI should question his nominee. "It’s up to them."

"I think the FBI should interview anybody they want, but within reason," Trump told reporters in the Rose Garden.

"They should interview, but they should be guided by what the senators are looking for," he said.

But, Trump said "I want it to go quickly" since the lingering accusations are unfair to Kavanaugh.

"It’s unfair to him at this point," Trump said.

Trump decried the "trauma" Kavanaugh has been subjected to in the confirmation process.

'This is our seventh investigation of a man who has really — you look at his life, until this happened, what a change he’s gone through. The trauma for a man who has never had any accusations, Trump said.

President Trump expressed optimism that the trade deal he struck with Canada and Mexico will be approved by Congress, but he suggested that the administration will have other options if it doesn't.

"If it doesn't we have lots of other alternatives," the president said without specifying which alternatives he was referring to. "Republicans love it. Industry loves it. If it's fair, it will pass. I think it will pass easily."

Trump said earlier he planned to submit the deal to Congress at the end of November.

He answered this question on trade after declining to answer a question from the same reporter on Judge Brett Kavanaugh's Supreme Court nomination (He said he'd come back to the Kavanaugh question after he answers more trade-related ones.)

President Trump acknowledged that he and Canadian Prime Minister Justin Trudeau have "had very strong tensions" in recent months — but said it did not impact the negotiations between the two countries.

"He's a professional, I’m a professional. We had very strong tensions. It was just an unfair deal whether it was Mexico or Canada," Trump said.

"There was a lot of tension I will say — between he and I, I would say more specifically," Trump said. "You know when it ended, about 12 o'clock last night." late-night deadline.

President Trump said Monday it's "too early to talk" with China on a new trade agreement, despite ongoing discussions carried out over the last several months by his Treasury Secretary.

"China wants to talk very badly. And I said, frankly, it's too early to talk," Trump said in the Rose Garden. "Can't talk now because they're not ready. Because they have been ripping us for so many years, it doesn't happen that quickly."

What this is all about: Trump's remarks came after imposition of new tariffs on $200 billion worth of Chinese goods. The tariffs stalled ongoing talks led by Treasury Secretary Steven Mnuchin, who had been expected to meet with Chinese negotiators in Washington last month before the meetings were scrapped.

President Trump wrapped up his remarks on the new agreement with Canada and Mexico by marking the first anniversary of the Las Vegas shooting.

"I want to send our thoughts and prayers to the victims of the Las Vegas shooting. That was a horrible, horrible time in the life of our country," Trump said. "Took place exactly one year ago today. All of America is grieving for the lives lost and for the families they left behind."

Fifty-eight people were killed and hundreds more were injured when a gunman opened fire on the Route 91 Harvest music festival from the 32nd floor of the Mandalay Bay Resort and Casino last year.

"Without tariffs we wouldn't be talking about a deal," Trump said in the Rose Garden as he touted a revamped NAFTA accord.

"Just for those babies out there that talk about tariffs — that includes Congress, 'please don't charge tariffs' — without tariffs, we wouldn't be standing here," he said. "I can tell you, Bob and all of these folks would not be standing here right now."

A number of Republicans — including House Speaker Paul Ryan — have expressed opposition to tariffs.

President Donald Trump expressed some concerns about the fate of his new trade agreement with Canada and Mexico on Monday as he prepares to send it to Congress for approval.

"I plan to sign the agreement by the end of November. I then will submit it for approval to Congress where in theory there should be no trouble — but anything you submit to congress is trouble, no matter what," Trump said.

"It’s the single greatest agreement ever signed but they’ll say, ‘Well, Trump likes it therefore we’re not going to approve it because that'll be good for the Republicans, so therefore we can’t approve it," Trump said.

The Trump administration plans to send the new deal to Congress, starting a 60-day review period before Trump can sign it. Congress can suggest changes during that time.