Senate Majority Leader Mitch McConnell said it’s “premature” to discuss what the Senate might do if President Trump is impeached in the House.

He said he was “never given an explanation” why the aid to Ukraine was held up even as he was pressing administration officials to release the aid.

McConnell said they were "going to find out what happened” in terms of the whistleblower’s allegations through the “apolitical” Senate Intelligence Committee process.

Asked if the Senate would take up articles of impeachment if they were sent over from the House, McConnell said he was not going to discuss all “various hypotheticals that have been aired out about what may or may not happen in the House” and said it was “premature” to consider.

Rep. Adam Schiff, the chairman of the House Intelligence Committee, just tweeted that the whistleblower's attorney has informed the committee that he would like to testify.

The testimony, he said, could happen as soon as this week.

House Speaker Nancy Pelosi was just speaking about President Trump's announcement that he will release a transcript of his call with Ukraine's president and whether her caucus will stand out of it turns out to be less harmful.

Pelosi made it clear that "it's not about that."

"This is about the Constitution of the United States and many other, shall we say candidates of impeachable offense in terms of the Constitution of the United States. But this is the most understandable by the public. And It's really important to know this. There is no requirement there be a quid pro quo in the conversation. If the President brings up he wants them to investigate something, that's to — of his political opponent, that is self-evident that it is not right. You don't ask foreign governments to help us in our election. That's what we try to stop with Russia. It's wrong. So it's not only about how we make decisions about our foreign policy and our global security. It's about undermining the integrity of our election.That's A. B: I don't think there's a — I don't know. I don't think there's a grasp on the part of this administration that the quid pro quo is not essential to an impeachable offense, but if you have sequencing, like a couple of days before the President withdrew the bipartisan support for Ukraine. Bipartisan enthusiastic support for Ukraine a few days earlier, he withdraws it, then makes this statement. President's words weigh tons. Weigh tons. And just bringing up the election is bad enough. That there would be a quid pro quo isn't necessarily in the conversation, but in the sequencing. So this is not a good thing for a democracy, for the leader of the free world to be talking like that, and I don't even know if there are any scruples involved. That's why I say they think lawlessness is a virtue and now want to export it to another country." 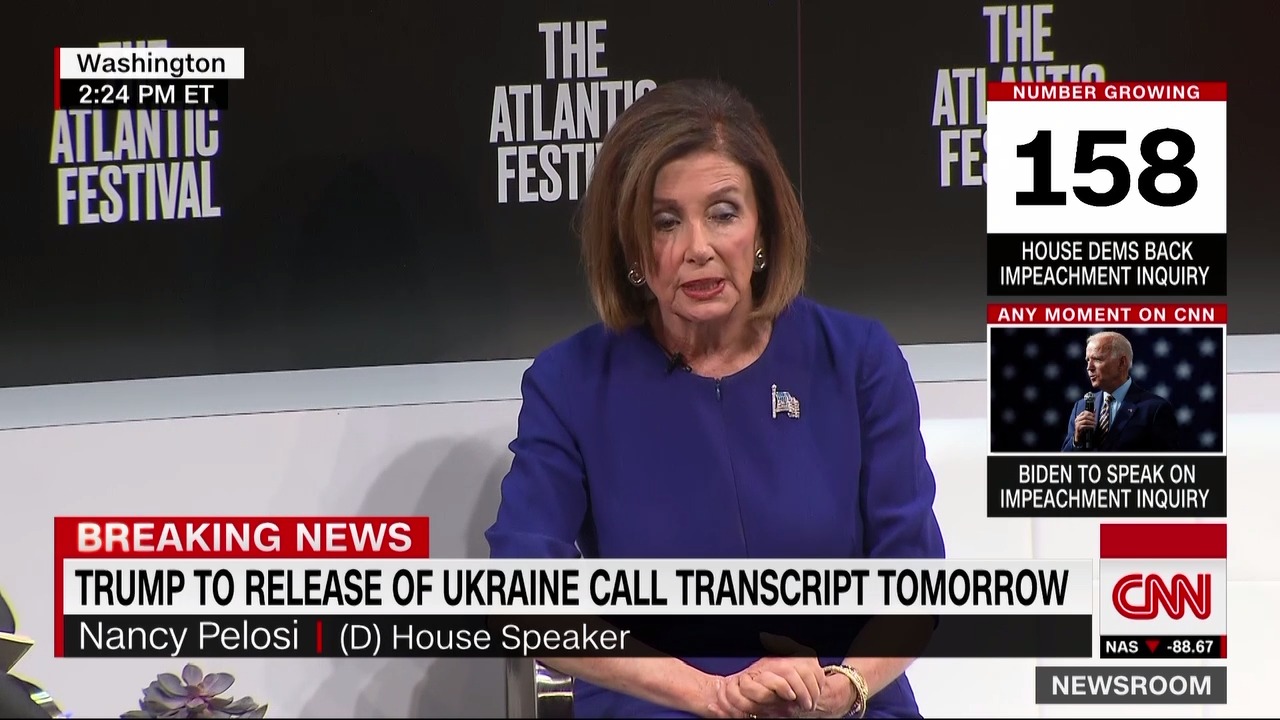 "The President is making lawlessness a virtue in our country," she said.

Pelosi is expected to give a statement at 5 p.m. ET. She is speaking now at The Atlantic Festival.

President Trump just tweeted that he has "authorized the release tomorrow of the complete, fully declassified and unredacted transcript of my phone conversation with President Zelensky of Ukraine."

Sanders, who has always been open to an impeachment inquiry, called on the committee to demand information from the Trump administration.

"But I think all over this country, we have people including Republicans, who are sick and tired of a president who believes that he does not have to obey the Constitution of the United States, and that he is above the law," he said.

Sanders continued: "Enough is enough. Today I hope very much that the Judiciary Committee will go forward with an impeachment inquiry, but let me also say this. And that is, that the Congress of the United States must show the American people, that it can walk and chew bubblegum at the same time."

House Speaker Nancy Pelosi will make a statement at 5 p.m. ET following her meeting with the House Democratic Caucus, her deputy chief of staff announced on Twitter.

The growing controversy over President Trump's phone call with Ukraine's president has brought House Democrats near a "tipping point" on impeachment as the party weighs how to respond to the incident.

Remember: The House has not taken any steps toward an impeachment inquiry. But if Congress does take action, here's a step-by-step look at how it would play out:

Here's the breakdown of how impeachment match would work: 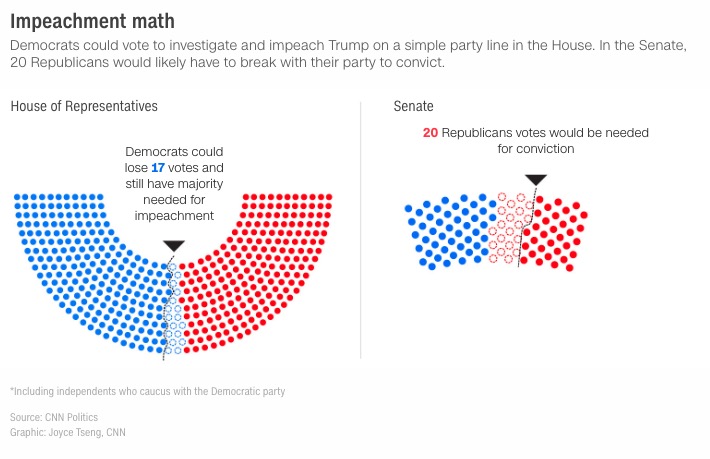 House Democrats are nearing a tipping point on impeachment in the wake of the Trump administration blocking a whistleblower complaint's release to Congress.

Moderate Democrats are showing new openness to move ahead with such an inquiry.

At least 155 of the 235 Democrats in the House have made clear they support starting the impeachment inquiry process.

Rep. Justin Amash of Michigan, a former Republican who has since become an independent, has also called for impeachment proceedings, bringing the total number of representatives to 156.