The foreign affairs spokeswoman for the UK's opposition Labour Party has launched a blistering attack on Donald Trump.

Speaking to CNN, Emily Thornberry, the shadow foreign secretary, listed a litany of complaints about Trump, including his policies on Iran, the Middle East and climate change.

And she said Trump was unfit to have been offered a state visit, with all the pageantry that it entails.

Thornberry noted that only three previous US Presidents had been welcomed on state visits.

"I don't think that this President, given his behavior, deserves the honor," she said, adding: "I do not see why our country should be a cute backdrop for President Trump's re-election campaign."

Labour leader Jeremy Corbyn, who turned down an invitation to the state banquet for Trump at Buckingham Palace, will address protesters at a London rally against Trump's visit later on Tuesday.

Corbyn has attended state banquets and events for other controversial world leaders who have faced questions over their human rights records, including Chinese President Xi Jinping.

Asked if it was hypocritical of Corbyn to boycott Monday evening's event, Thornberry said it was "a good question," but that the Labour Party was taking a different approach towards Trump "because of our closeness to America."

Melania Trump is joining the President at Downing Street today. She'll attend a garden party there while the President has meetings.

Prime Minister Theresa May’s husband, Philip May, is hosting the first lady at the event, and he will also give her a tour of Downing Street and join her for tea. 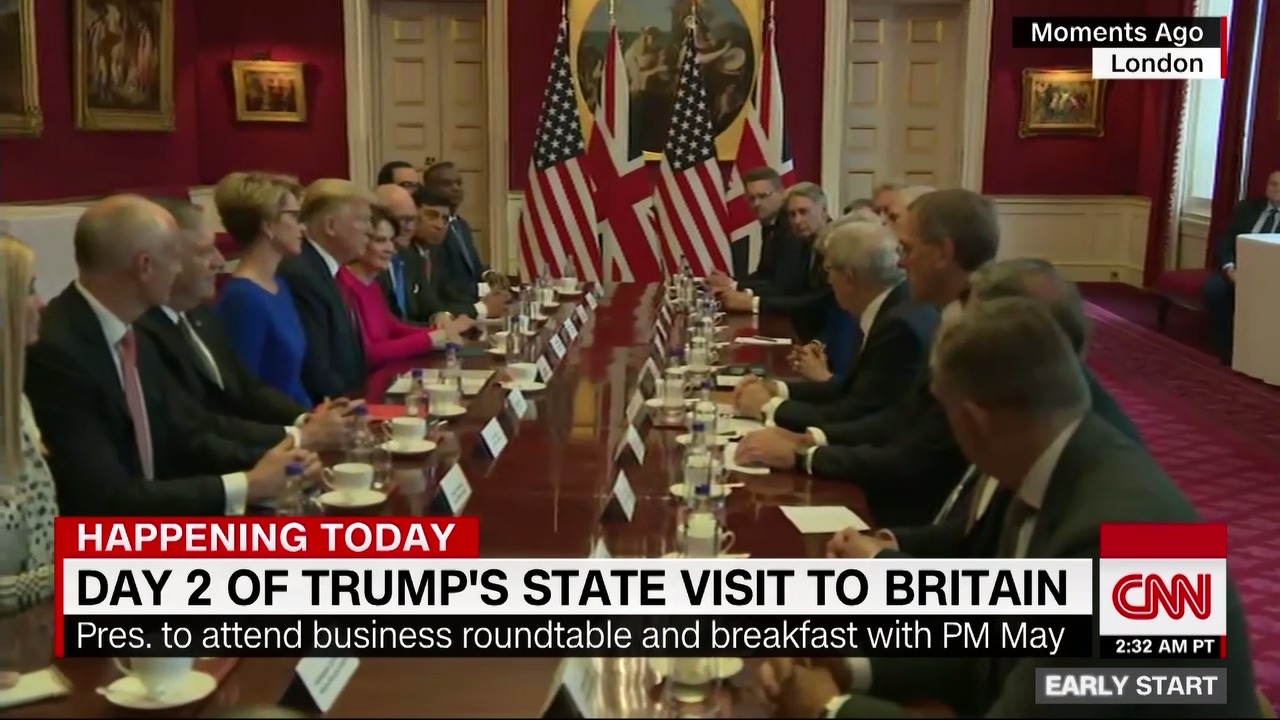 President Trump is starting his second day in the UK with a breakfast of business chiefs at the Tudor-era St. James's Palace.

He's there with outgoing Prime Minister Theresa May. They're also joined by the President's daughter and senior adviser Ivanka Trump and a dozen or so executives from American and British firms.

At the start of the session, Trump said it had been an "honor" working with his British counterpart and joked she should delay her departure as prime minister until a new trade deal is struck.

"It's an honor to have worked with you," Trump told May. "Stick around. Let's do this deal."

President Trump's first day in the UK was filled with pomp and ceremony as he met with the Queen for an official state visit.

If you didn't catch all the action yesterday, here's what you need to know about how the day unfolded:

We have lift off! The "Trump baby" blimp has been inflated and is floating in the London skies, next to the Houses of Parliament.

The balloon became one of the key images of British protests against Donald Trump during his working visit to the country last year.

Set up by a team of "Trump Babysitters," it took about an hour to inflate.

"He’s hilarious, he's so funny, we love him, but he makes a really serious point," Zoe Gardner, one of the organizers of the blimp protest, told CNN.

"People in the country really, really dislike Trump, and really are outraged at his policies," she said, citing the Trump administration's stances on climate change, migrants, abortion and gay adoption rights. "That kind of thing really doesn’t sit well with the British public."

The "Trump baby" will fly outside Parliament for a couple of hours, while protesters gather nearby in Trafalgar Square for a rally.

US President Donald Trump and Theresa May, the UK's outgoing prime minister, have just opened their breakfast roundtable with business leaders. It's the first political meeting on Trump's itinerary for his UK visit.

May opened the discussion by mentioning her intention to secure a "bilateral trade agreement" with the US -- something the British government is desperate to pin down as the UK heads towards its twice-delayed exit from the European Union.

"I think there are huge opportunities to seize," May said.

Trump told May: "I very much appreciate the relationship we've had ... It's been outstanding -- I guess some people know that, some people don’t, but you and I know it."

He added that there was an opportunity to "tremendously enlarge" the trading relationship between both countries. "I think we’ll have a very substantial trade deal."

Trump then nodded to May's impending exit -- she's resigning as leader of the Conservative Party on Friday.

"I just want to congratulate you on having done a fantastic job," he said. "I don’t know exactly what your timing is, but stick around, lets do this deal," he told her, to laughs around the table.

The press have now left the room, and the leaders have begun their talks.

Outgoing British Prime Minister Theresa May will present Donald Trump with a copy of Winston Churchill's personal draft of the Atlantic Charter when they meet today.

The 1941 document set out the Allied goals for a post-war world, written by Churchill and Franklin D. Roosevelt.

It's the second Churchill-themed gift Trump has received on his state visit; yesterday, the Queen gave him a first edition of one of Churchill's books about the Second World War.

The monarch's speech at Monday's state banquet also nodded to post-war cooperation between the two nations, which is becoming something of a theme for the visit.

Anti-Trump activists will kick off a day of protests this morning, by flying the "Trump Baby" blimp outside the Houses of Parliament.

The day's main rally will begin in Trafalgar Square at 11 a.m (6 a.m. ET), with protesters heading towards Downing Street to voice their displeasure at Trump's welcome in the UK, though they will not be allowed to march along Whitehall past the entrance of Downing Street.

Aside from the blimp, the protest will also feature a 16-foot robot version of Trump sitting on the toilet and tweeting, which has already been wheeled into position.

Organizers hope the protests will rival last year's demonstrations, when huge crowds of people took to the streets to protest against the President's working visit.

Trump tweeted on Monday evening: "Tremendous crowds of well wishers and people that love our Country. Haven’t seen any protests yet, but I’m sure the Fake News will be working hard to find them." 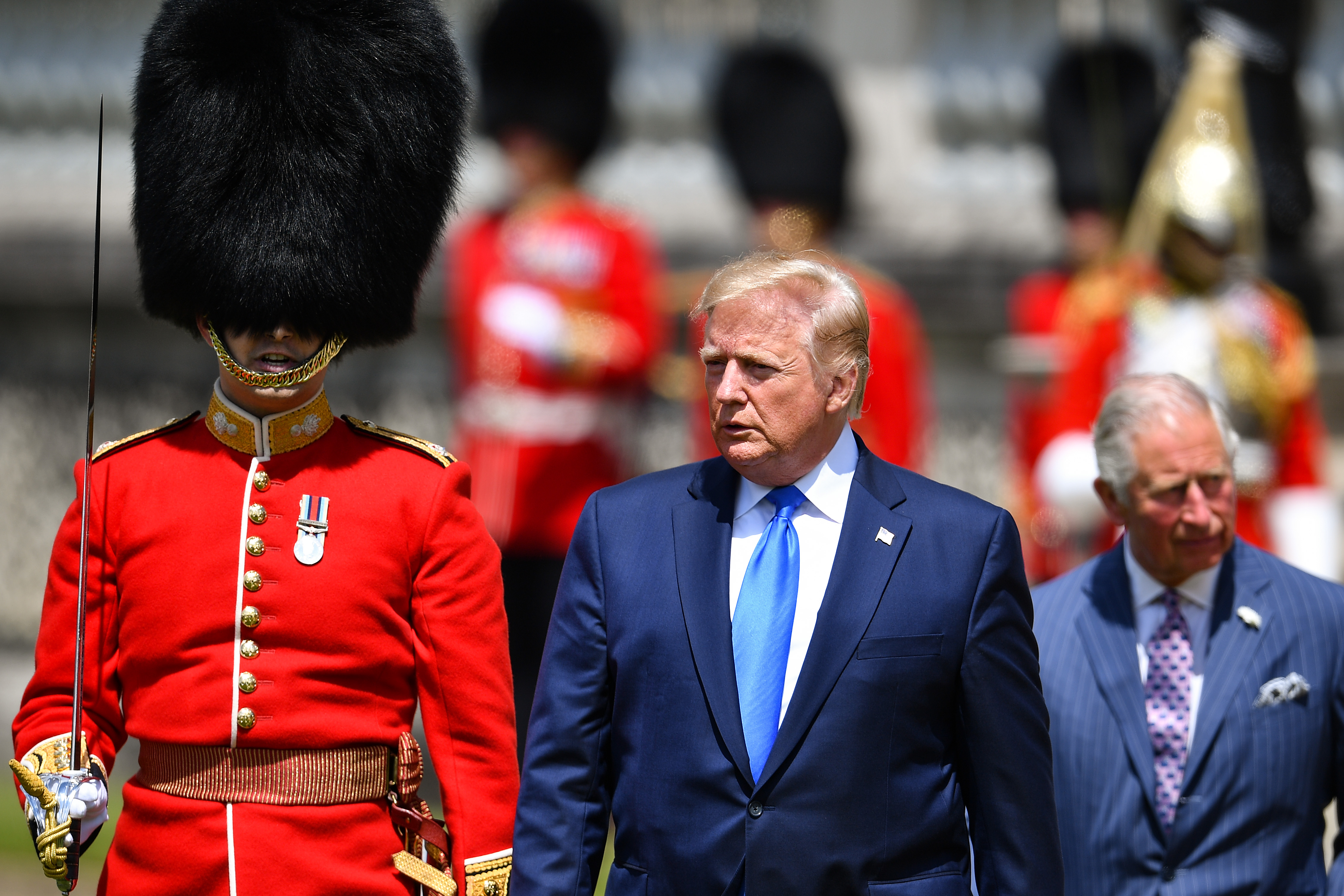 After a ceremonial welcome, a state banquet and a spot of tea with the royals on day one, the focus of Donald Trump's state visit to the UK shifts to politics on day two.

The President will join outgoing UK Prime Minister Theresa May for a breakfast meeting alongside the Duke of York and senior UK and US business leaders at St. James's Palace.

Then he'll head to Downing Street for talks with May, followed by a live press conference.

This evening, the Trumps will host a reciprocal dinner for the royals at Winfield House, the US Ambassador's London residence in Regent's Park, where they are staying during their trip.

The couple will be hoping to avoid getting too close to anti-Trump protests, which will be taking place across London throughout the day.

Activists plan to hound the US President, following him as he moves from meeting to meeting. And yes, the Trump Baby blimp will be back...