President Trump said he's seen only a "very, very small group" of protesters during his visit to the UK, despite large crowds gathering to rally against his visit.

He continued: "I didn't see the protesters until just a little while ago, and it was a very, very small group of people put in for political reasons, so it was fake news."

Many of the protesters have gathered at London's Trafalgar Square and Parliament Square, where a "Trump Baby" blimp was inflated.

Here's a look at the protests unfolding today:

"I know Boris, I like him, I've liked him for a long time," Trump said standing alongside the outgoing UK leader Theresa May.

Trump said he didn't know another contender, Michael Gove, but was assured that he, too, would suffice as prime minister.

As for May, he acknowledged she rejected his advice to sue to EU. But he said that may not have been a mistake.

"She's probably a better negotiator than I am," Trump said.

President Trump, asked about his threatened tariffs on Mexico, said he believes the tariffs will go into effect as he scheduled. (They're due to begin on June 10.)

"I think it's more likely that the tariffs go on," Trump said.

Trump has said he's implementing the tariffs because Mexico hasn't acted on immigration.

"Mexico shouldn't allow millions of people to try to enter our country, and they could stop it very quickly," Trump said. "I think they will. If they won't, we're going to put tariffs on. Every month those tariffs go from 5% to 10% to 15% to 20 and then to 25%."

Trump also said if Republicans worked to block the tariffs, they would be mistaken.

Britain's exit from the European Union will happen and should happen, President Trump says.

Praising his British counterpart Theresa May as doing a good job in handling Brexit, he said the planned divorce would be good for the United Kingdom.

"It wants to have its own borders. It wants to run its own affairs. This is a very, very special place and i think it deserves a special place," Trump said at a joint news conference.

The United States and the United Kingdom have reached an agreement on Huawei, President Trump says.

"We’ll be able to work out differences," Trump said.

The US has worked to prevent the Chinese telecom giant from developing 5G networks in Europe and elsewhere. US officials have threatened to curb intelligence sharing in countries where the company is allowed to operate.

"We have an incredible intelligence relationship," Trump said. 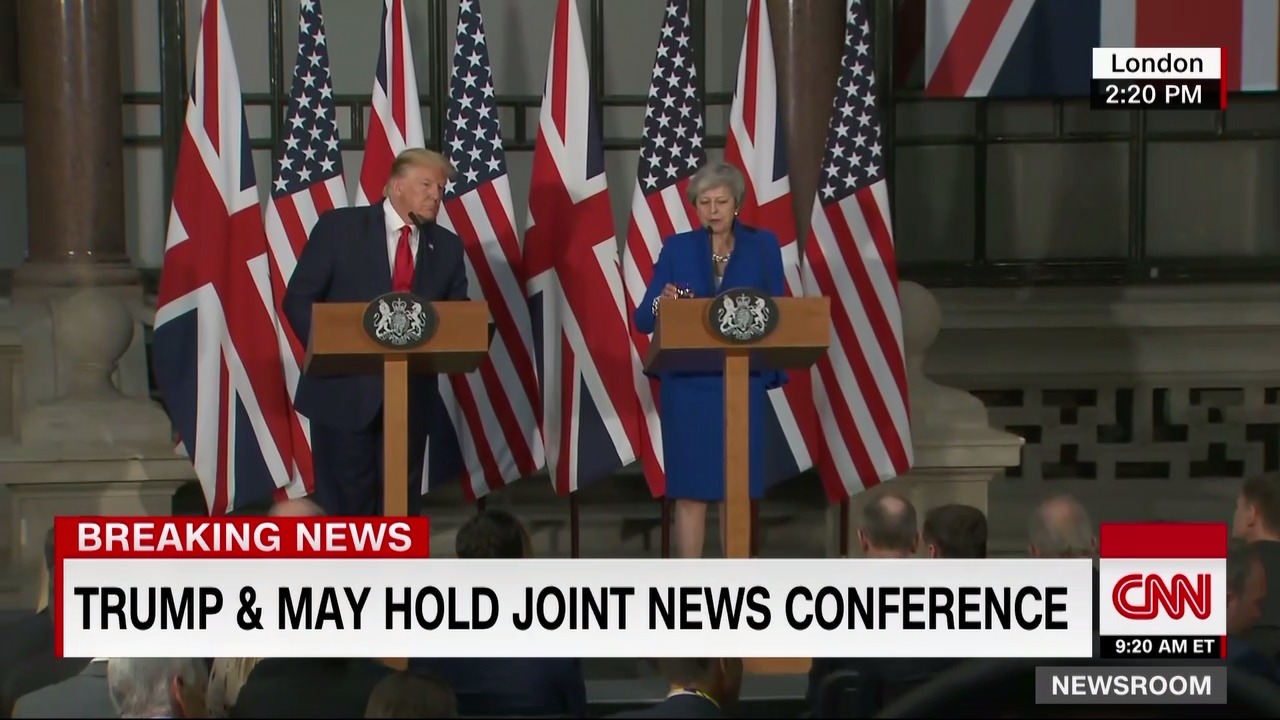 President Trump said London Mayor Sadiq Khan is a "negative force" who has done a "poor job" running the city.

Trump was actually asked his thoughts about the leader of the UK's opposition party, Jeremy Corbyn. But after Trump started to answer, the same reporter asked British Prime Minister Theresa May about Khan — and Trump began to talk about the London mayor.

"Well, I think he's been a not very good mayor from what I understand. He's done a poor job, crime is up, a lot of problems," Trump said.

He continued: "And I don't think he should be criticizing a representative of the United States that can do so much good for the United Kingdom." Trump then added: "He should be positive, not negative. He's a negative force, not a positive force."

Some context: Trump and Khan have long exchanged insults. Most recently, Khan compared Trump to a young child after the President called him a "stone-cold loser." 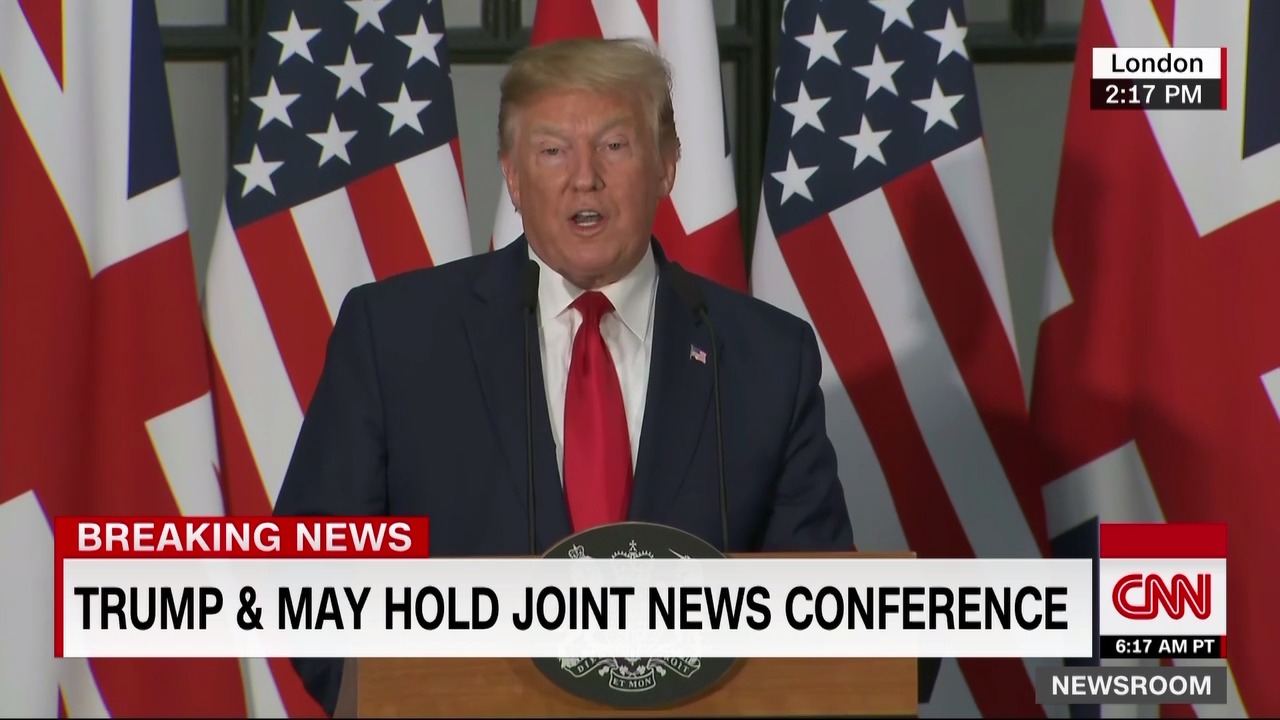 President Trump said the US will establish a "phenomenal trade deal" with the UK after it leaves the European Union.

"As the UK makes preparations to exit the European Union, the United States is committed to a phenomenal trade deal between the US and the UK," he said. "There is tremendous potential in that trade deal."

British Prime Minister Theresa May has failed to secure Britain's withdrawal from the European Union. Last month, she announced her resignation over that. She's due to step down on Friday. 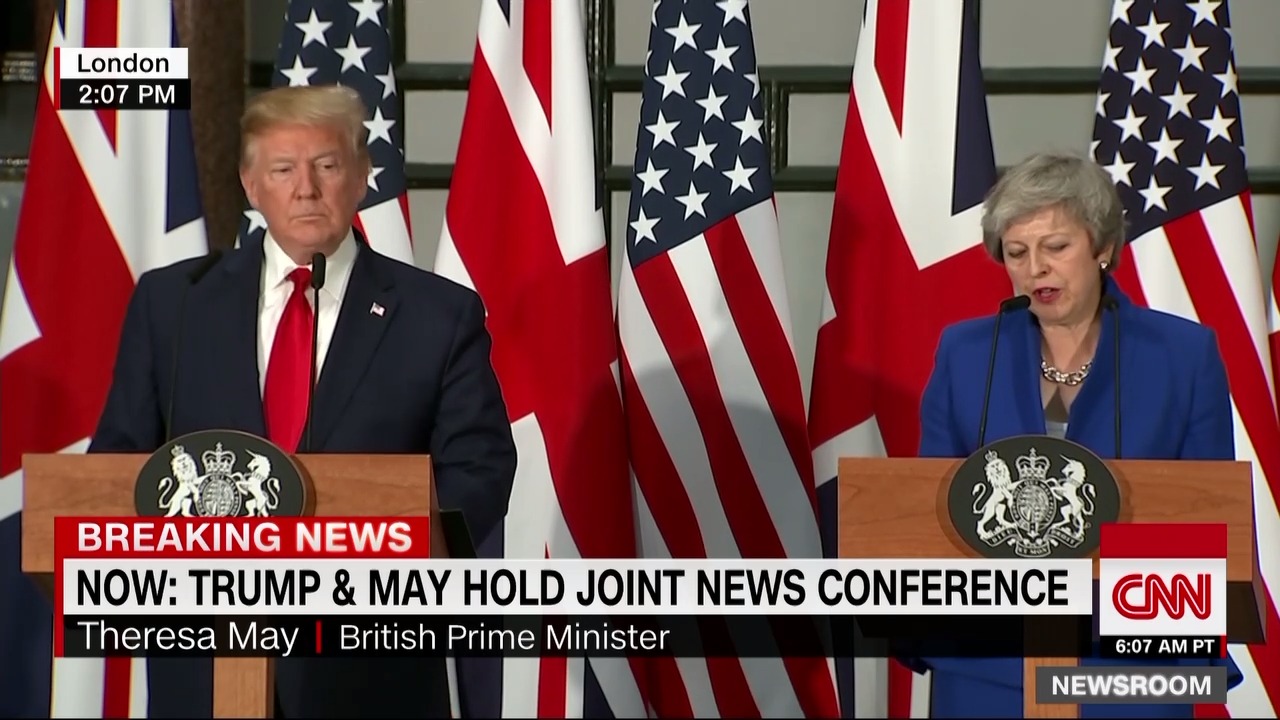 Prime Minister Theresa May started her remarks at today's news conference by touting her relationship with President Trump — and pointing out that sometimes they disagree.

She thanked Trump and the US for expelling Russians after the nerve attack in the UK and noted that the US and the UK have always "stood together and acted together."

"Today we've discussed again the new and evolving challenges to our security, our values and our way of life. We share the same view about their origin and our objectives am meeting them, but like prime ministers and presidents before us — and no doubt those that will come after — we can also differ sometimes on how to confront the challenges we face.”

President Trump said the US and UK "share many goals and priorities around the world." 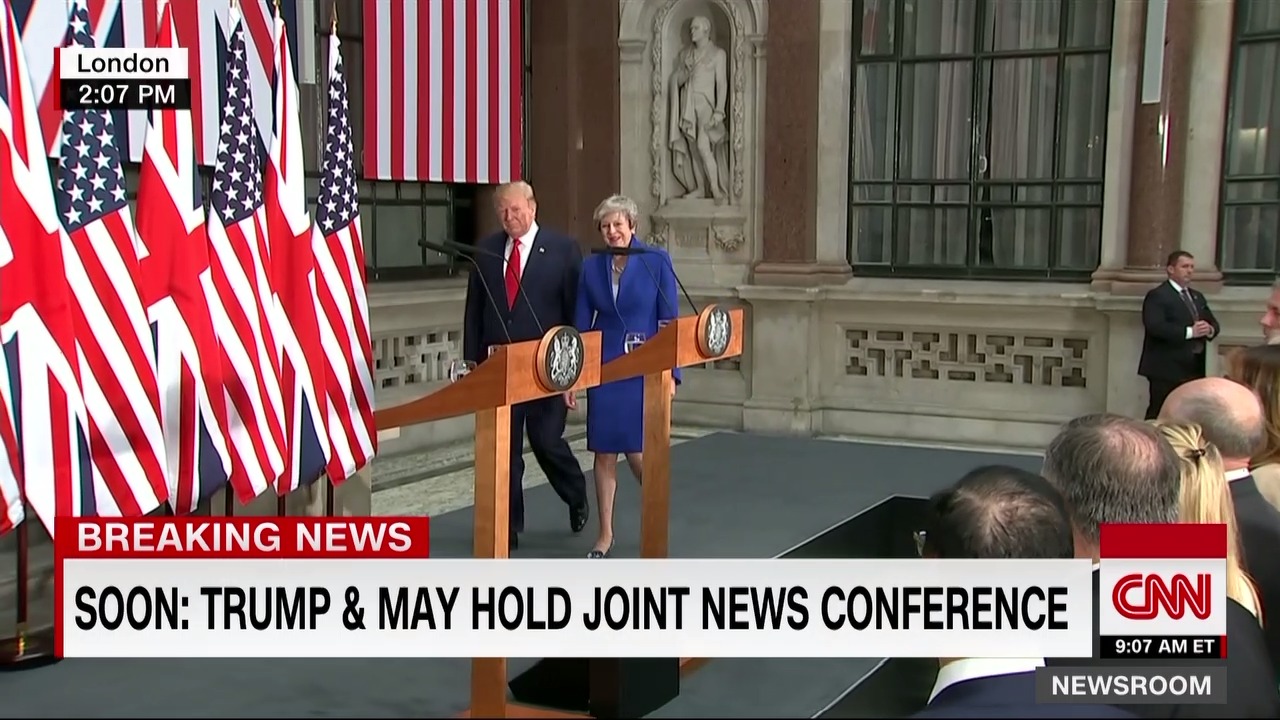 President Trump and British Prime Minister Theresa May are holding a joint news conference in London.

You can watch it live in the player at the top of this story (refresh the page if you don't see it).