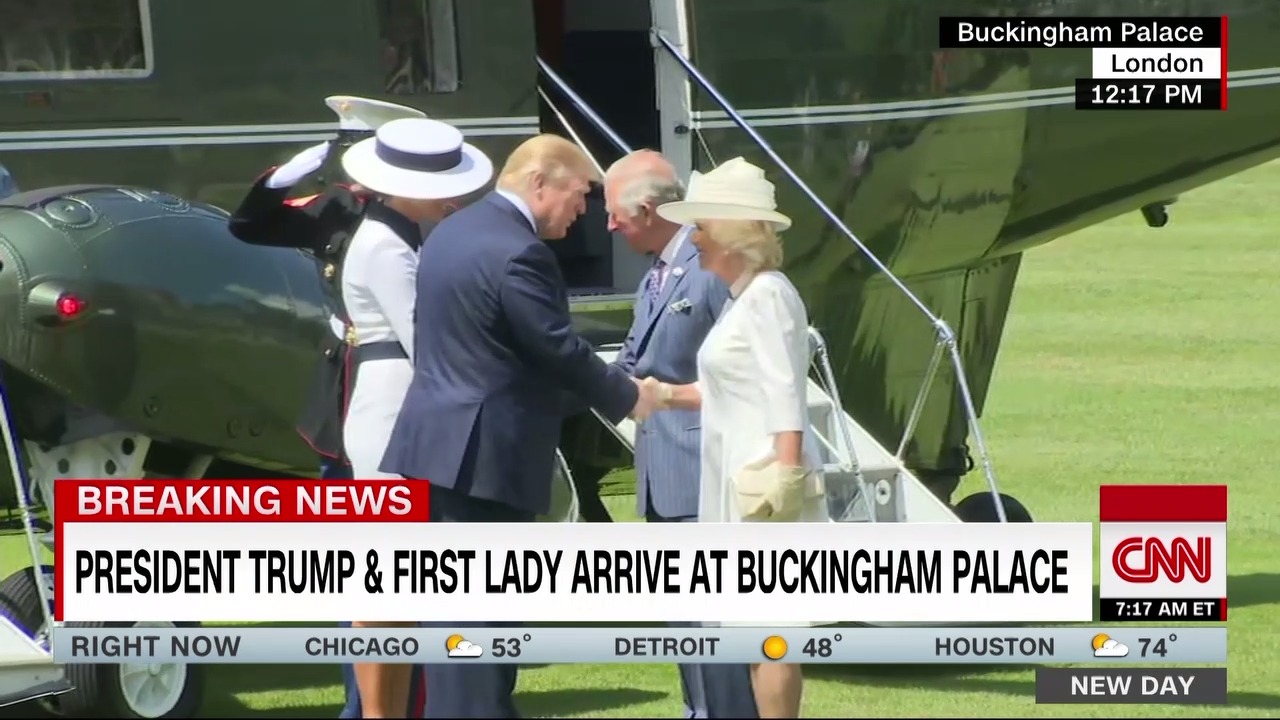 President Trump and the first lady have arrived at Buckingham Palace to officially launch their state visit to the United Kingdom.

The couple flew aboard the Marine One helicopter to the palace from the US ambassador’s residence, where Trump spent the morning issuing tweets about US-China trade and CNN.

What happens now: The Queen will welcome the first couple at the palace gardens as a guard of honor marches past and gun salutes are fired in nearby Green Park and from the Tower.

After that, Trump will then sit for lunch with the Queen. She'll take him on a tour of the royal collection, where artifacts of significance to America will be on display.

President Trump will soon arrive at Buckingham Palace to begin his state visit with Queen Elizabeth.

Here's how the day will unfold:

Donald Trump and the First Lady will be met at Buckingham Palace shortly by the Queen, Prince Charles and his wife Camilla, Duchess of Cornwall.

They'll have lunch with the Queen, which Prince Harry will also join them for.

Harry's wife Meghan, Duchess of Sussex, will not be present -- since she's on maternity leave. In the lead-up to his trip, Trump called Meghan "nasty," before falsely denying that he had done so.

After lunch, the Trumps will head to Westminster Abbey with Andrew, Duke Of York, where they will lay a wreath at the Grave of the Unknown Warrior.

After that, they will rejoin Charles and Camilla for tea in Clarence House. The conversation between Charles, a lifelong conservationist, and Trump, a climate change denier, could be an interesting one.

It appears Donald Trump has been following CNN's coverage of his own state visit since arriving in London.

"Just arrived in the United Kingdom. The only problem is that @CNN is the primary source of news available from the U.S. After watching it for a short while, I turned it off. All negative & so much Fake News, very bad for U.S. Big ratings drop. Why doesn’t owner @ATT do something?" Trump tweeted, after arriving at Winfield House, the US ambassador's residence, where he is staying during his trip.

Trump has frequently attacked CNN during his presidency. On Sunday, he called CNN "fake news" for reporting that he had called Meghan, Duchess of Sussex "nasty" -- despite the existence of a recording of the statement.

Monday's itinerary is filled with pomp and circumstance, but when the focus of Trump's state visit shifts towards politics on Tuesday, Downing Street will be keen to secure assurances over a post-Brexit trade deal with the US.

The White House reiterated their position on Brexit on Monday, saying in a statement that "President Trump seeks to strengthen our economic ties with the United Kingdom through an ambitious new trade agreement."

The statement adds that Trump "supports Brexit being accomplished in a way that will not affect global economic and financial stability while also securing independence to the United Kingdom."

Trump told the Sunday Times over the weekend that Britain should "walk away" from Brexit talks if the European Union does not give it what it wants -- though economists have warned of the impact of the UK leaving without a deal.

The President also repeated his suggestion -- previously made to Prime Minister Theresa May -- that the UK should sue the EU. When asked how this would work, Trump said he would have put "on the table" the "mistakes made by the EU that cost the UK a lot of money and a lot of harm."

The Prime Minister’s office is trying to stop a meeting between the US President and leading Brexit supporters while Trump is in London, a source close to Brexit Party leader Nigel Farage has told CNN.

According to the source, Farage, Arron Banks and Andrew Wigmore, who describe themselves as “old friends” of Trump, are hoping to meet the US President over the next few days, possibly on Tuesday.

The source said Trump could meet the group after his joint press conference with Theresa May on Tuesday, during the President's "executive time."

"That’s the realistic window if -- and it’s still a big if -- we get to see him," the source said, adding that no meeting is confirmed.

“Yes, it’s very true that Number 10 trying to stop Nigel and us,” the source said, adding that Trump would ignore such attempts.

In response, a Downing Street spokesman told CNN: "Who the President meets during his visit is of course a matter for him."

Trump has previously suggested he may meet Farage and Conservative leadership hopeful Boris Johnson during his visit.

But that idea is also likely to be unpopular with May. Both figures have been heavily critical of her Brexit approach throughout her tenure as prime minister, and the success of Farage's Brexit Party helped deliver the Conservatives a woeful vote share in last month's European elections.

Donald Trump's comments about London mayor Sadiq Khan, tweeted just minutes before he landed in the UK, have been criticized by a host of lawmakers from Britain's opposition Labour Party.

"So appalled Theresa May has given this man a red carpeted platform to do this," Labour MP Yvette Cooper wrote on Twitter. "Doesn't help Britain to be lavishing pomp on a President so determined to be divisive, childish & destructive."

Stephen Doughty added that "the sexist, racist, liar" Trump is "unfit for office," and called his arrival "a day of humiliation for Britain."

And David Lammy, a longtime critic of Trump, asked: "Wonder why you have a problem with London's first ever Muslim mayor?" After Trump mocked Khan for his height, Lammy added that he "stands taller than you ever will."

Crowds are beginning to gather outside Buckingham Palace ahead of US President Donald Trump's arrival to meet the Queen.

For two American families, Trump's UK trip came as a surprise. "We were on holiday and just read he was coming, and thought, 'this is going to be interesting!'” Andrea Lofgran, from Arizona, told CNN.

“When we came around the corner and saw the American flag and the Union Jacks together coming down the Mall it sent chills up and down. It was really special," added Lofgran, who is visiting London with her daughter Lauren, nine, and their neighbors Dave and Julia Weed.

“It’s pretty impressive if you think of the Queen and how many presidents she has met. That’s what blows me away," she said.

The Queen has met every US president during her reign, with the exception of Lyndon Johnson. Her first presidential meeting was with Harry Truman in 1951, a year before she ascended to the throne.

"I'm excited to see Marine One and the helicopters," added Lauren.

Joseph Afrane, 55, from London, is used to setting up camp outside Buckingham Palace. The royal fan was in place bright and early. -- wearing a specially-made suit -- as he has been several times for big royal occasions.

"If Her Majesty is holding a very important national event, I will come down as early as half past seven,” he told CNN.

Afrane said he was “very, very excited" about the US President's state visit.

The Trumps have disembarked Marine One at Winfield House, the US Ambassador's London residence, where they will spend the next couple of hours before heading to Buckingham Palace to meet the Queen and other royals.