President Trump in the UK

President Trump and British Prime Minister Theresa May got along very well during their dinner Thursday at Blenheim Palace in the United Kingdom, a source with knowledge of the discussions told CNN.

During May’s speech at dinner, Trump’s “eyes lit up” at her words and talk about the relationship between the two countries. That likely made him more amenable to apologize to May about the comments he made about May to The Sun, the source said.

The dinner took place around the same time Trump's interview with The Sun was published.

President Trump and first lady Melania Trump have arrived in Glasgow, Scotland, where they will spend the weekend at his golf club in Turnberry.

Trump owns two high-profile courses in Scotland: the Trump International Golf Links situated amid the dunes of Aberdeen and Trump Turnberry in the southwest.

President Trump is on his way to Glasgow, Scotland, for the weekend.

A White House official told CNN earlier the President's flight had been delayed because he was talking with British journalist Piers Morgan.

Some of it was a private conversation, but some of it also was an interview.

London's Metropolitan Police tweeted that Regent Street — one of the main streets where protesters were marching against President Trump's UK visit — and others around the city have reopened after this morning's rallies.

Here's what regent street looked like this morning during the protests:

President Trump just wrapped up his two-day tour of England. Tea with the Queen was the last scheduled event.

He'll spend the weekend in Scotland, where his mother was born. He also owns two high-profile courses in Scotland: the Trump International Golf Links situated amid the dunes of Aberdeen and Trump Turnberry in the southwest.

The Trumps were there for tea with Queen Elizabeth II. Here's footage of their motorcade leaving the castle: 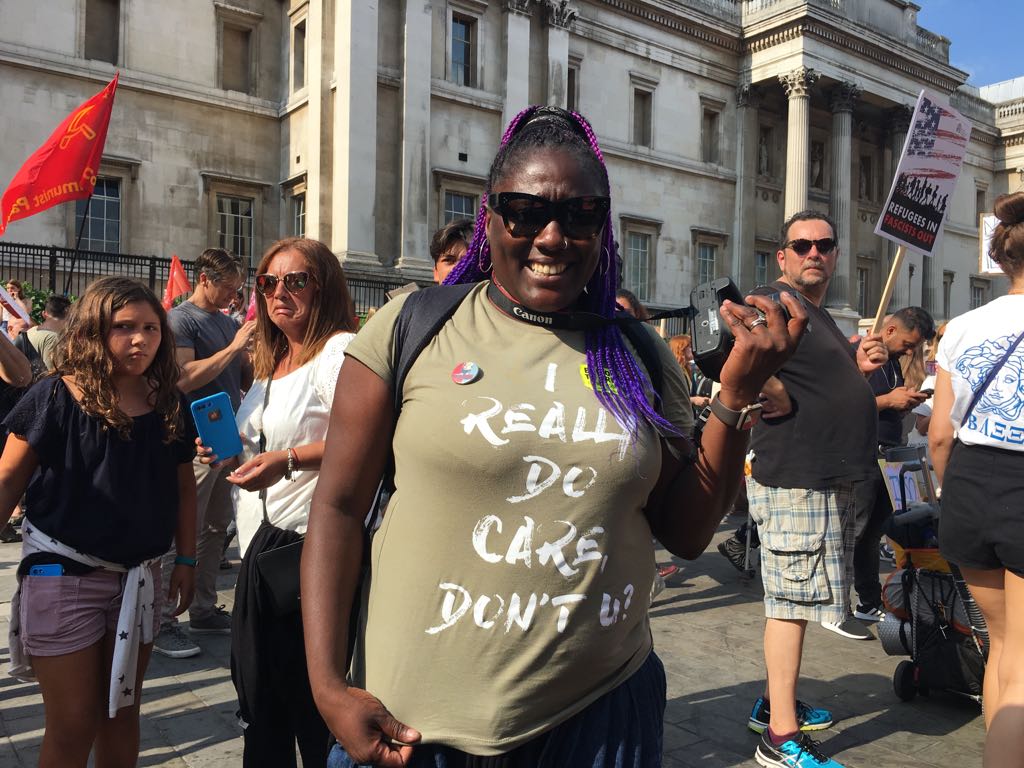 Ann-Marie Fields, 44, attended today's protest in London wearing a shirt that reads, "I really do care. Don't u?" — a protest slogan that's become popular at anti-Trump administration rallies in the US.

The shirt is a reference to the controversial jacket Melania Trump wore on the day she visited a US facility holding immigrant children separated from their families. The first lady's Zara coat read "I really don't care. Do u?"

In the days after Trump wore the jacket, American protesters rallying against family separations at the US border began wearing similar shirts. Many were spotting at the June 30 immigration rallies.

Trump is fond of Churchill: In 2017, he restored the bust of Churchill to the Oval Office immediately after assuming the presidency. 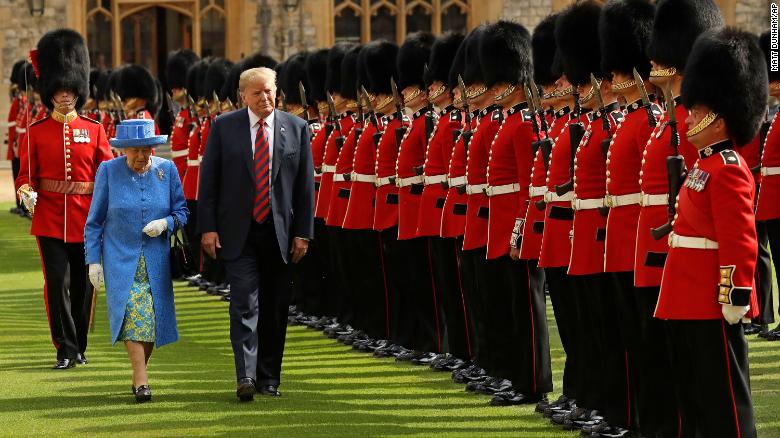 The Trumps greeted the Queen, then stood for the US National Anthem. The President and First Lady placed their hands on their hearts while the Queen held her hands and bowed her head.

The President and the Queen inspected the front rank of the Guard of Honor. The two then returned to a platform at the front as the military marched.

The Queen chatted with the President and first lady as planes were heard overhead.

Trump and the Queen chatted as they walked toward Windsor Castle, the first lady trailing closely behind. They entered the castle for tea at 5:10 p.m.