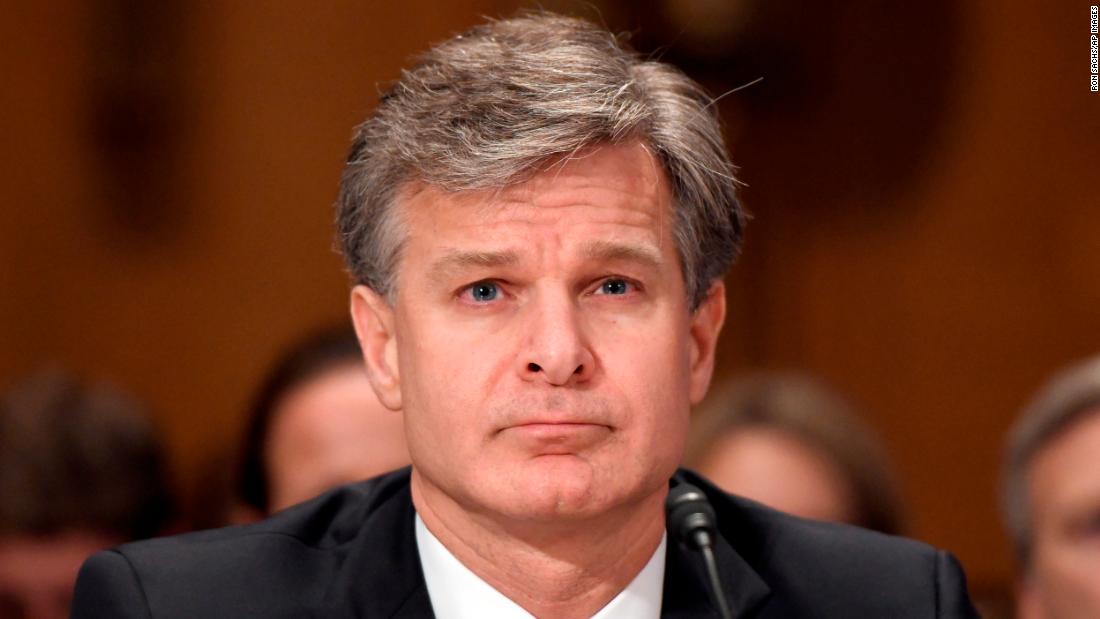 Speaking with Lester Holt at the Aspen Security Forum, Wray said the operations were ”very active” and “aimed at sowing discord and divisiveness in this country.”

Wray said that the intelligence community has not observed an effort by Russia to target specific election infrastructure as they did in 2016, but “we could just be a moment away from it going to the next level.”

“To me it’s a threat that we need to take extremely seriously and respond to with fierce determination and focus,” Wray said.

Wray told Lester Hold that his view “has not changed” on Russia’s meddling in the 2016 election.

“The intelligence community‘s assessment has not changed, my view has not changed which is that Russia attempted to interfere with the last election,” Wray said.

Wray said he did not watch Putin’s remarks in Helsinki earlier this week live because he was meeting with “some of our closest foreign partners in the intelligence community.” 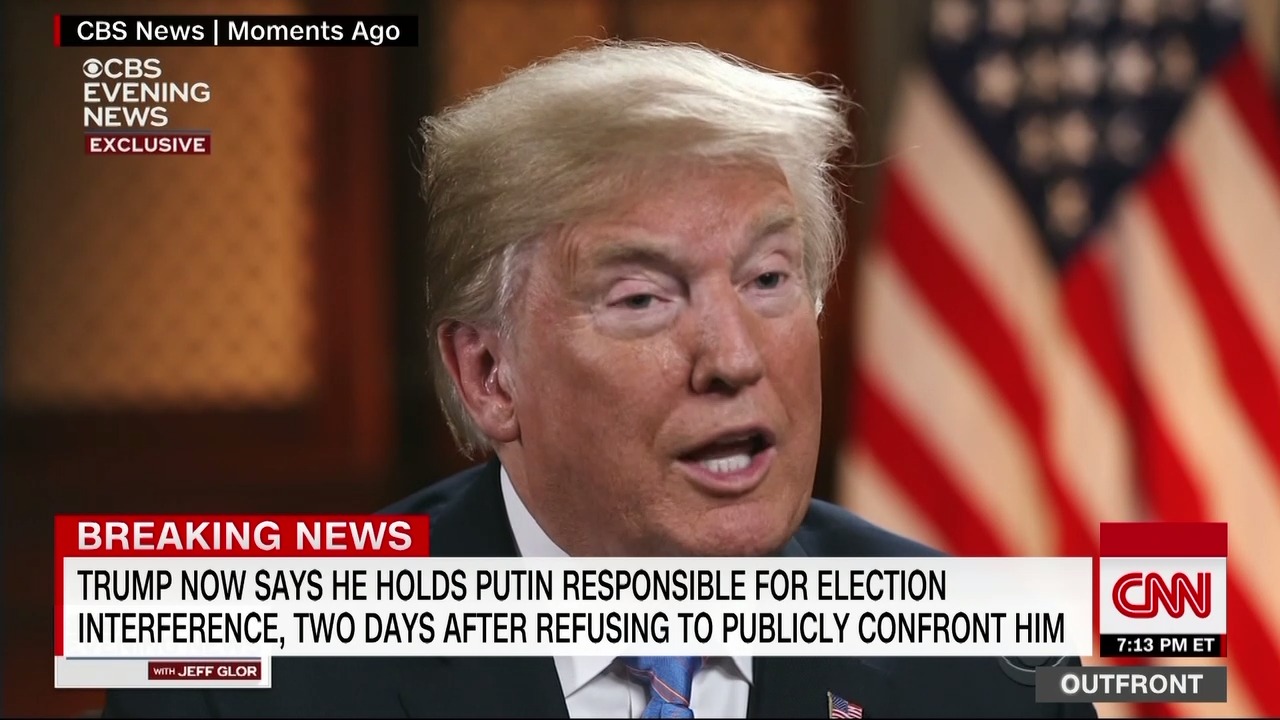 “I don't know what the fuss is all about. I think we did extremely well. It's fake news,” Trump said.

He bemoaned the lack of coverage of his one-on-one meeting with Putin, which contained no aides and hasn’t been formally read-out by any US officials.

US officials have been unable to provide a fulsome accounting of that meeting since no other officials attended. Press secretary Sarah Sanders provided a list of topics that were covered in the meeting on Wednesday, but did not provide specifics. 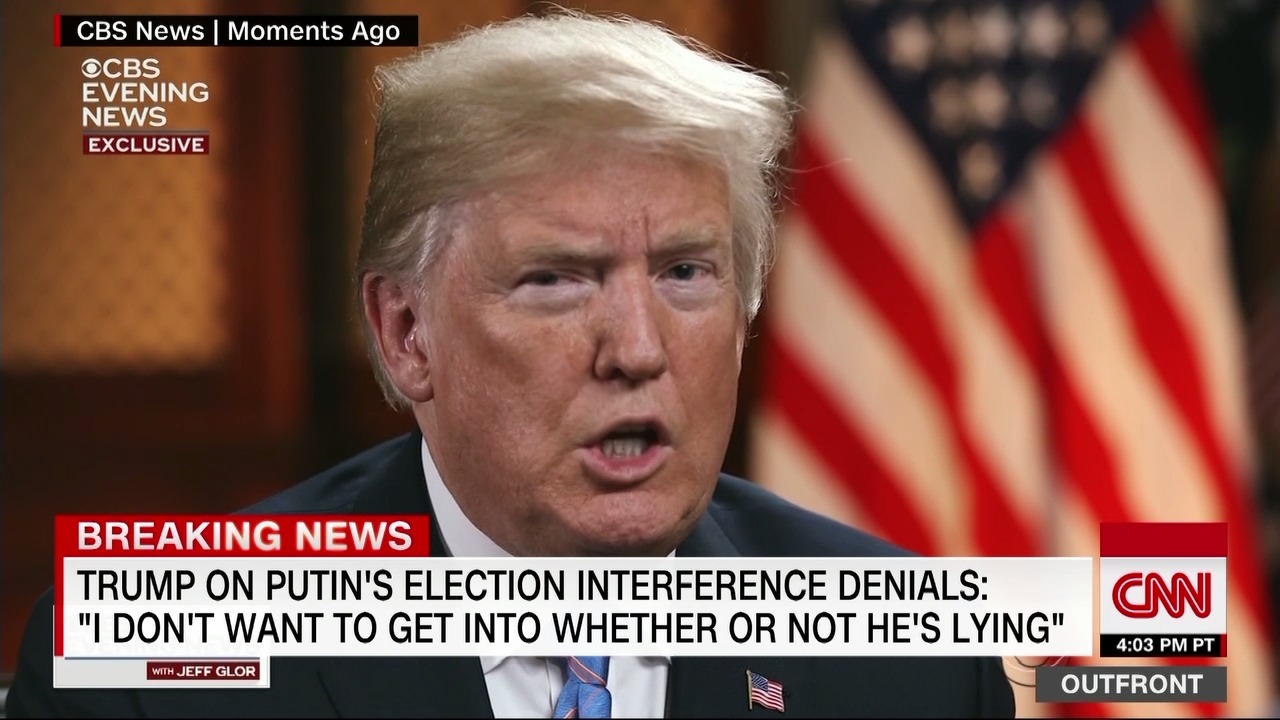 President Trump said on Wednesday evening he “accepts” a US intelligence assessment that Russia continues to target the United States, capping a day of twists in his belief of his own officials.

Asked by CBS whether he agrees with Director of National Intelligence Dan Coats’ assessment that Russia continues to post a threat, Trump said “I'd accept that. He's an expert.”

“This is what he does. He's been doing a very good job. I have tremendous faith in dan Coats,” Trump said, adding he’d spoken generally to Coats after his return from Helsinki.

Trump said he has “excellent people in the agencies” providing him intelligence information.

“When they tell me something, it means a lot,” he said.

Lawmakers on Capitol Hill are forging ahead with plans to push back on the fallout from President Donald Trump's comments at a news conference with Russian President Vladimir Putin.

"There's a lot of discussion post the Helsinki press conference that we are all engaged in, so we are figuring it out."

Sen. Marco Rubio, a Republican from Florida, has worked alongside Maryland Democratic Sen. Chris Van Hollen to craft legislation that would automatically subject Russia -- or any other country -- to sanctions if they interfered in upcoming elections. The senators introduced the legislation back in January, but it's gotten new traction this week following the Helsinki summit.

But sanctions legislation can be notoriously complicated to write, and the broad scope of the measure -- which would snap stiff sanctions on Russia's banking and energy sectors if the director of national intelligence found evidence of interference in the 2018 election -- could have spillover effects that would hit US businesses.

"That's part of the discussion we're having," said Sen. John Cornyn of Texas, the second-ranking Republican in the chamber. "Obviously, we would need to make it targeted so we wouldn't have ancillary damage to US companies or American interests. It is not exactly easy to craft that kind of legislation, but I think there seems to be some bipartisan support for sending that message and letting Mr. Putin know that if he keeps this up there will be consequences." 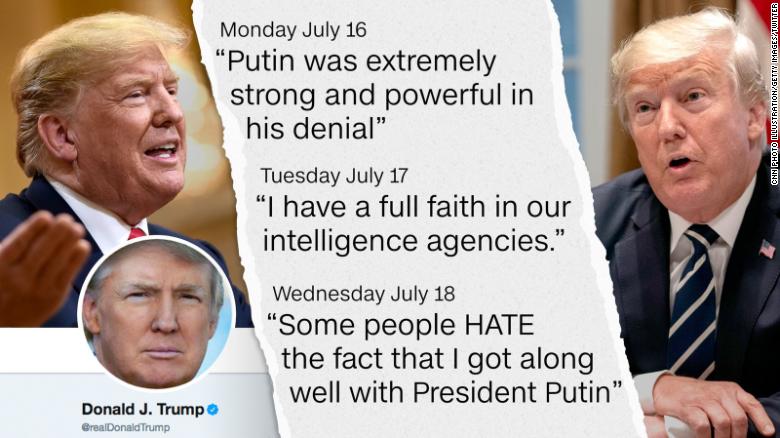 President Donald Trump and his White House staff, facing an onslaught of bipartisan fury over his glowing remarks about Vladimir Putin, have been forced to walk-back, clarify, and outright deny remarks Trump made that have cast doubt on his belief in US intelligence agencies' findings that the Russians did in fact meddle in the US election.

Confused? You're not alone. Here's a short timeline of what's been said:

Monday, 11:50 a.m. ET: During Monday's news conference, Trump sided with Putin over US intelligence, saying, "My people came to me -- Dan Coats came to me and some others -- they said they think it’s Russia. I have President Putin; he just said it’s not Russia. I will say this: I don’t see any reason why it would be." Moments later, he added, "I have great confidence in my intelligence people, but I will tell you that President Putin was extremely strong and powerful in his denial today."

Monday, 3:40 p.m. ET: Trump tweeted, "As I said today and many times before, 'I have GREAT confidence in MY intelligence people.' However, I also recognize that in order to build a brighter future, we cannot exclusively focus on the past – as the world’s two largest nuclear powers, we must get along!"

Tuesday, 2:30 p.m. ET: Facing a growing backlash upon returning to Washington, D.C., Trump said that he "realized there is some need for clarification" about his remarks on Russian interference in the 2016 US election. "In a key sentence in my remarks I said the word 'would' instead of 'wouldn't.'" He explained he had reviewed a transcript and video of his remarks. "The sentence should have been: 'I don't see any reason why it wouldn't be Russia'," he said. Sort of a double negative."

Wednesday, 12:30 p.m. ET: Speaking during a Cabinet meeting at the White House, Trump was asked by a reporter if Russia was still targeting the US. "No," he responded, looking directly at the reporter.

Wednesday, 2:45 p.m. ET: Asked about the comment later, White House press secretary Sarah Sanders said the President was declining to answer shouted questions when he said "no," and not disputing intelligence findings. "The President said 'thank you very much' and said no to answering questions," Sanders said.

Wednesday, 5 p.m. ET: President Trump said he holds his Russian counterpart Vladimir Putin personally responsible for Moscow's attempts to interfere in the 2016 US election. In an interview with CBS News anchor Jeff Glor, Trump said Putin was culpable as Russia's leader. "I would because he’s in charge of the country just like I consider myself to be responsible for things that happen in this country," Trump said. "So certainly as the leader of the country you would have to hold him responsible."

Note: An earlier version of the above graphic featured incorrect dates and shortened quotes. The graphic has been corrected. 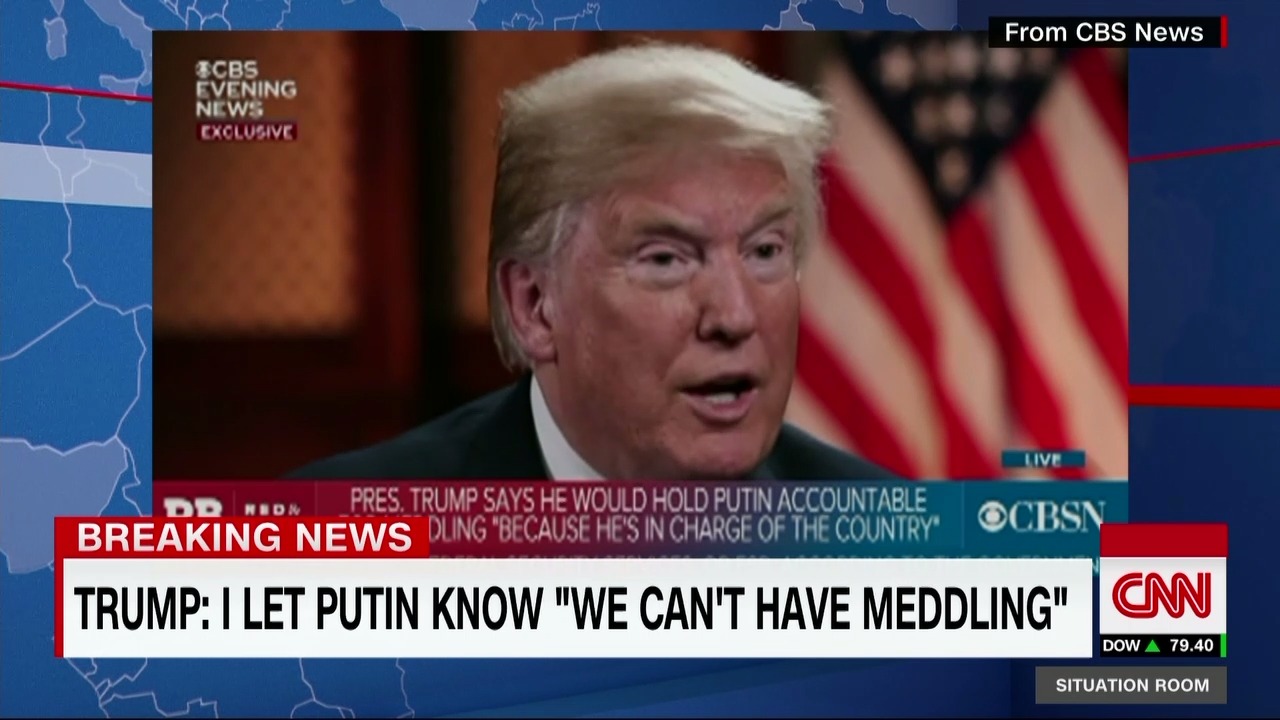 President Trump said on Wednesday he holds his Russian counterpart Vladimir Putin personally responsible for Moscow's attempts to interfere in the 2016 US election.

"I would because he’s in charge of the country just like I consider myself to be responsible for things that happen in this country," Trump said. "So certainly as the leader of the country you would have to hold him responsible."

He said his message to Putin warning against future meddling was "very strong" during their meeting Monday.

"I let him know we can’t have this. We’re not going to have it. And that’s the way it’s going to be," Trump said.

Trump said he accepted US intelligence assessments that Russia was responsible for the election interference.

State Department spokesman Heather Nauert called the Russian request to investigate US citizens “absurd” and said the US “does not stand by Russian allegations” about the American individuals, including Bill Browder.

This is very different than what White House press secretary Sarah Sanders said at the White House today, when she said they were taking the proposal under consideration. "The President's going to meet with his team and we'll let you know when we have an announcement on that," Sanders said.

Putin suggested Browder would be of primary interest in such an interrogation, and accused Browder's associates of funneling millions of dollars earned illegally in Russia into the US to aid the Hillary Clinton campaign.

"Putin wants me pretty badly. This is not the first time that he's made an attempt to get me," Browder said in an interview on CNN's "Erin Burnett OutFront." "Yes, I'm a bargaining chip, but he's using everything he's got with whomever he's got it with to try to get me."

Cecilia Vega, the senior White House correspondent for ABC News who shouted out the question about if Russia was still targeting the US to President Trump earlier today, is now weighing in on Twitter.

Trump said, "No," after Vega's question, but it's now unclear if he was answering her.

Vega says Trump "was looking directly at me when he spoke," heard her clearly and "answered two of my questions."

This, of course, differs than how President Trump and the White House now see it. White House press secretary Sarah Sanders told reporters this afternoon that Trump was simply saying "no," he wouldn't take anymore questions.

The White House would not say on Wednesday whether President Trump told President Putin to stay out of US elections.

Asked by CNN's Jim Acosta whether Trump relayed that message to Putin during their one-on-one in Helsinki, press secretary Sarah Sanders said only that they discussed meddling.

She also said she was not aware of a recording of the two leaders' meeting.

Here's how the exchange played out:

CNN: Did the President tell Vladimir Putin at their summit in Helsinki to stay out of US elections?

Sanders: Certainly the President, as both he and President Putin said, discussed election meddling. I think we’ve made very clear what our position is on that front.

Sanders: The President has made clear to Vladimir Putin they should stay out of the US elections.

CNN: Was there a recording made of their one-on-one meeting?

Sanders: I’m not aware of one.