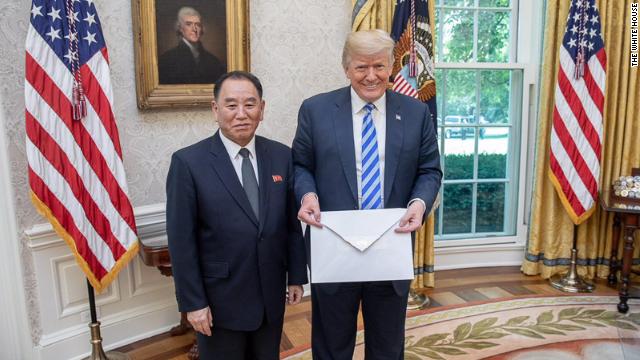 President Trump got a visit today at the White House from North Korea's senior official, Kim Yong Chol, who hand delivered a letter by Kim Jong Un to the President.

The large envelope containing a letter from Kim Jong Un to President Trump was “carefully examined” for toxins and anything potentially dangerous before it arrived at the White House, a White House official said.

Here's a look at the envelope:

In his tweet, Scavino misspelled the North Korean leader's name.

Moments after the meeting, he told reporters that he hadn't yet opened the letter. Here's that moment:

Senate Majority Leader Mitch McConnell said he would advise President Trump on the North Korea talks to “be interested in the details," but cautioned him not to fall in love with the deal.

"You have to not want the deal too much," he said.

"If you fall in love with the deal, and it's too important for you to get it, and the details become less significant, you could get snookered. And I think the President is fully aware of that as he goes into it."

McConnell's comments came in an appearance at a conference in Louisville.

He said he expects talks with the North Koreans to be challenging.

“I think you can anticipate the North Koreans making every effort they can to get sanctions and other relief, and give up as little as possible," McConnell said. "It's going to be quite a challenge. And I think for these situations to work, you have to not want the deal too much."

President Trump said his administration had readied "hundreds of new sanctions" to tighten the pressure campaign on North Korea, but said he has opted to hold off on additional sanctions while talks are still ongoing.

"We had hundreds of new sanctions ready to go on," Trump said.

But he explained he decided the US is "not going to put them on until such time as the talks break down."

"Why would I do that when we’re talking so nicely?" he added.

But the President said he hasn't seen the letter yet.

"I purposely didn't open the letter," he said. "I haven't it opened it yet. I didn't open it in front of the director. I said, 'Would you want me to open it?' He said, 'You can read it later.'"

I could be in for a big surprise, folks."

President Trump said he would retire the phrase "maximum pressure" in describing the US campaign to choke off North Korea.

He said sanctions would remain in place, but that he's looking to improve ties.

He said he didn't raise human rights during his meeting on Friday.

President Trump shook Kim Yong Chol's hand before he departed the White House in a black US government SUV.

Kim was at the White House for a little less than 90 minutes.