Paul Ryan: The Speaker of the House announced today that he will not seek re-election.

Syria: President Trump tweeted this morning, "Get ready Russia," saying a US military response to the alleged chemical attack in Syria is coming.

President Trump tweeted a photo with the Congressional GOP leaders ahead of their dinner at the White House tonight.

The group, which included Vice President Pence, posed giving a thumbs up. House Majority Whip Steve Scalise was also part of the gathering

Who will be at tonight's dinner

The agenda is expected to focus on Congressional priorities and will likely touch on the ongoing deliberations over how to respond to an alleged chemical attack in Syria.

One topic that will be off limits is the fate of special counsel Robert Mueller.

Earlier today, Cornyn told CNN that he doesn't plan to bring up the possibility of the President firing Deputy Attorney General Rod Rosenstein and Mueller, a move that Cornyn would oppose.

The circumstances of the infamous "Access Hollywood" tape remain something of a mystery.

The 2005 "Access Hollywood" recording first surfaced about a month before Election Day, damaging Donald Trump's campaign at a key moment. In the recording, Trump could be heard off-camera bragging about being able to sexually assault women.

NBC has long held that it was about to broadcast the tape when The Washington Post obtained and published it.

According to the network, the tape sat on a shelf for years before being discovered during the late stages of the presidential election.

It is unknown how many people at NBC had access to the tape.

The Post published the video on October 7, just a month before the 2016 election. That same day, the Obama administration accused the Russian government of hacking the Democratic National Committee and meddling in the presidential election. Soon after, The Washington Post published the Access Hollywood tape and then WikiLeaks began publishing stolen emails from Hillary Clinton's campaign chairman John Podesta within an hour of the tape's release.

A source with knowledge of the matter said NBCUniversal, which produces "Access," has not been contacted by special counsel Robert Mueller's office or the Southern District of New York. There has been no subpoena, the source said.

FBI agents who raided the home, office and hotel of Donald Trump's personal lawyer sought communications that Trump had with attorney Michael Cohen and others regarding the infamous "Access Hollywood" tape that captured Trump making lewd remarks about women a month before the election, according to sources familiar with the matter.

The warrant's specific reference to Trump is the first known direct mention of the President in a search warrant, and sources said it appeared in connection with "Access Hollywood."

One of the sources said the warrant also referenced an investigation into wire fraud and bank fraud. CNN previously reported FBI agents removed Cohen's computer, cell phone, business files and financial documents, according to the source.

The search warrant also sought communications between then-candidate Trump and his associates regarding efforts to prevent disclosure of the tape, according to one of the sources. In addition, investigators wanted records and communications concerning other potential negative information about the candidate that the campaign would have wanted to contain ahead of the election. The source said the warrant was not specific about what this additional information would be.

The warrant is the first indication that investigators suspect there was any effort to suppress the tape. It is not clear Cohen played any role in the Access Hollywood controversy.

Another source familiar with the matter confirmed to CNN that agents sought information regarding the Access Hollywood tape, as The New York Times first reported.

An attorney for Cohen didn't respond immediately to request for comment.

A British government official told CNN that the preparations are being made by the United Kingdom for possible action against Syria for the recent alleged chemical weapons attack. The official cautioned that though preparations are underway, the political decision has not yet been made.

CNN has previously reported that President Trump has spoken to both French President Emmanuel Macron and UK Prime Minister Theresa May.

One US official said the White House was most likely to coordinate with the French on a potential response since there are apparently concerns that May wouldn't receive approval from the UK parliament for strikes. 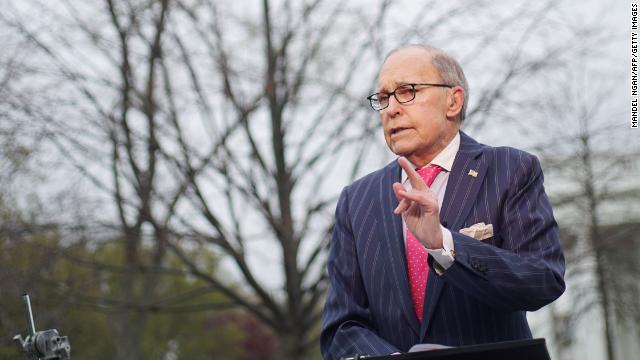 Expect some members of leadership, key committee chairs, members who represent agriculture communities who are concerned about trade issues.

This is part of a series of meetings set up by House GOP Conference Chair Cathy McMorris “to connect House members with Admin officials, which she started fairly early in the Administration when she established the ‘Meet the Cabinet’ meetings,” according to an aide.

Six White House and Congressional sources said there are growing concerns inside the White House and among GOP leadership that Democrats will immediately seek to impeach President Trump should Republicans lose control of the House this November.

"POTUS is aware" of the concern, one White House source said, describing the hand-wringing inside the West Wing over the upcoming midterms as "the anticipation of death."

To avert that scenario, Trump is expected to campaign hard for House Republicans in the November elections, the source said, citing internal White House planning.

"(Trump) doesn't want anyone to say he didn't fight hard to keep the House," the source added.

The fears of a wave election that would sweep Republicans from power in the House and perhaps usher in Democrat-led impeachment proceedings in 2019 are now heightened with the exit of House Speaker Paul Ryan.

"We certainly hope that Republicans will continue to remain in the House, particularly those that support the President’s agenda," Sanders said.

House Speaker Paul Ryan, in his interview with CNN's Jake Tapper today, described his best and worst moments in Congress. Here's what he said:

"I think getting tax reform done was one of the best moments," he said. "That's something I've been working on for over 20 years, ever since I've worked for Jack Kemp I have been working on tax reform. I think it is critical to lay a strong foundation for economic growth. I think there are a lot of things in the tax bill that help advance our poverty fighting agenda, like enterprise zones (and) social impact bonds. There's a lot things here that a lot of Americans don't even know about yet that I'm proud about and I'm excited about advancing some issues I really care about and that's really what I'm most proud about."

Speaker Paul Ryan, who announced today he will not be running for reelection, told CNN's Jake Tapper the decision wasn't because he had higher hopes.

"I really thought when I took this job, Jake, this is the probably last elected office I would have. I'm not going to run for president. That is not my plan. I will not do that," he said.

He added: "The last thing I'm thinking about is running for something."