Our live coverage of President Trump's rally has ended. Scroll through the posts below to see how it unfolded. 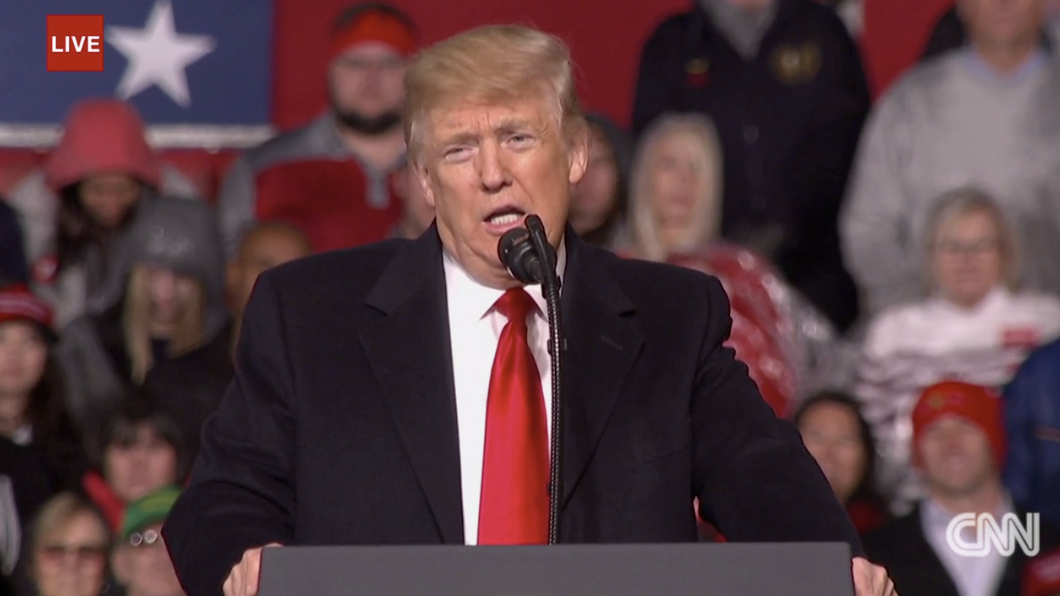 Trump said that Lincoln had developed a “phobia” about beating Confederate General Robert E. Lee, whom Trump called a “great general,” and that Lincoln sought out Grant, who was born in Ohio, to defeat Lee.

Trump also referenced Grant’s alleged drinking problem. He added that Grant is "finally being recognized as a great general."

Here's what Trump told the crowd in Ohio:

"It also gave you a general who was incredible. He drank a little bit too much. You know who I’m talking about right? So Robert E. Lee was a great general. And Abraham Lincoln developed a phobia. He couldn’t beat Robert E. Lee.

And one day, it was looking really bad. And Lincoln just said, 'You,' hardly knew his name. And they said, 'Don’t take him, he’s got a drinking problem.' And Lincoln said, 'I don’t care what problem he has. You guys aren’t winning.'

And his name was Grant. General Grant. And he went in and he knocked the hell out of everyone. And you know the story. They said to Lincoln, 'You can’t use him anymore, he’s an alcoholic.' And Lincoln said, 'I don’t care if he’s an alcoholic, frankly, give me six or seven more just like him.' He started to win. Grant really did — he had a serious problem, a serious drinking problem, but man was he a good general. And he’s finally being recognized as a great general.

But Lincoln had almost developed a phobia, because he was having a hard time with a true great fighter, a great general Robert E. Lee. But Grant figured it out. And Grant is a great general, and Grant came from right here." 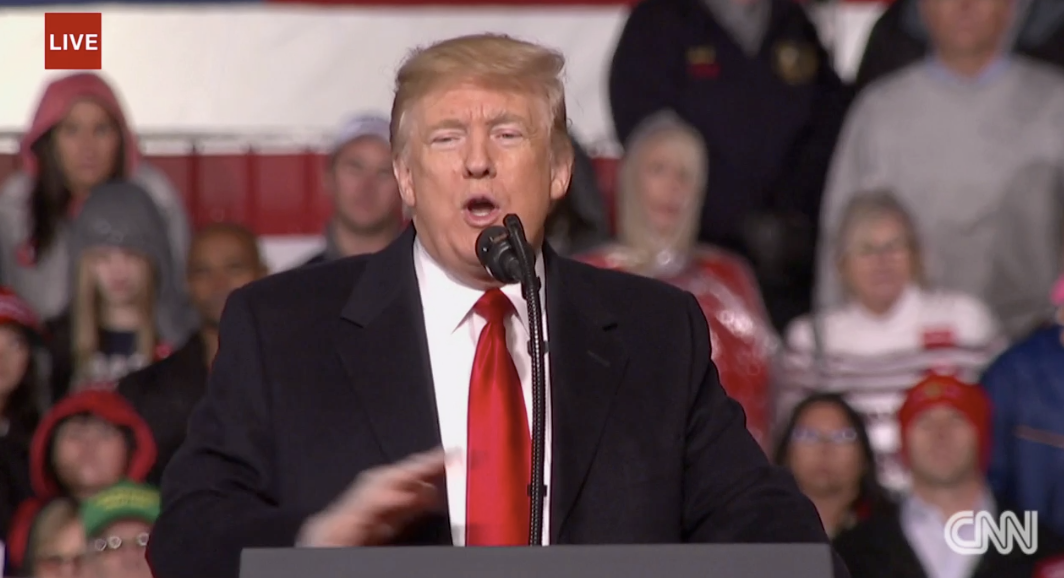 President Trump, speaking at his rally tonight, also recognized Kanye West, who paid a visit to the West Wing Thursday.

“Kanye West, what he did was pretty amazing,” Trump said.

The meeting had been billed by the White House as one centered on urban revitalization, workforce training, African-American unemployment, potential future clemencies and crime in Chicago.

West told reporters in the Oval Office that he had been asked to speak with the President about the detriments of applying stop-and-frisk policing policies in Chicago. The President has frequently praised the program, telling a group of law enforcement last week that he has urged the city of Chicago to "strongly consider stop-and-frisk."

During the meeting, West said the President is on a "hero's journey."

At the rally, Trump also named Hall of Fame running back Jim Brown, who also attended the Oval Office meeting.

“A great football player and an even greater man, he’s great," he said. 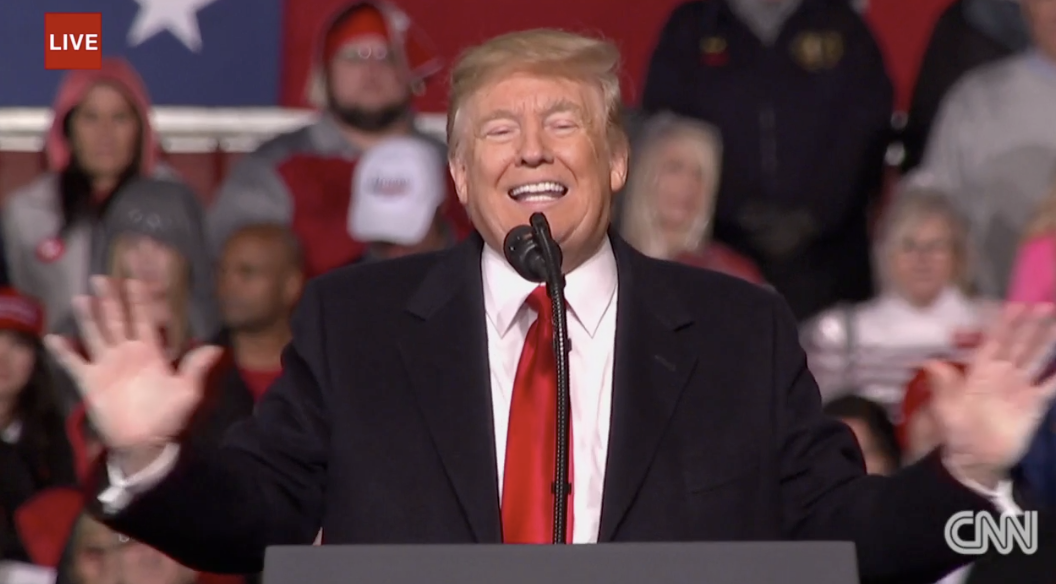 During his usual campaign rally riff on African-American unemployment numbers, a new line from President Trump tonight focused on “safety, opportunity, and justice for everybody,” and a request for African-American voters to “honor us” with support.

“My administration is fighting every day to deliver safety, opportunity, and justice for everybody, for everybody. We’re asking, as an example, all African American voters to honor us with their support this November. Get away from the Democrats,” he said.

Trump predicted that, due to his administration’s economic successes, Republicans will win the African-American vote in November.

“Think of it: we have the best numbers in history … I think we’re going to get the African American vote. And it’s true,” he said. 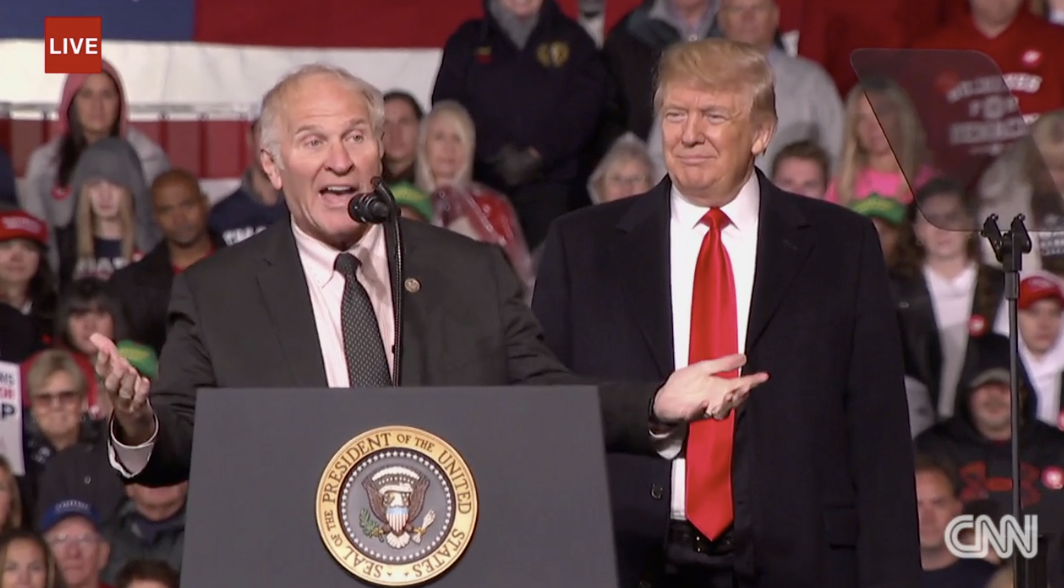 Ohio Congressman Steve Chabot made brief remarks during President Trump's rally in Lebanon, which is in his district.

As he ticked off a list of “God blesses,” including Warren County and President Trump, he added, “I never thought I’d say this, but God bless Kanye West.”

Why he mentioned Kanye West: The rapper met Thursday with Trump, telling the President in an Oval Office meeting before reporters why he supports the Republican.

"There was something about putting this hat on that made me feel like Superman," West said, as part of an extended soliloquy that spanned topics from his mental health to prison reform to what kind of plane Trump should fly in.

West also said the President is on a "hero's journey." 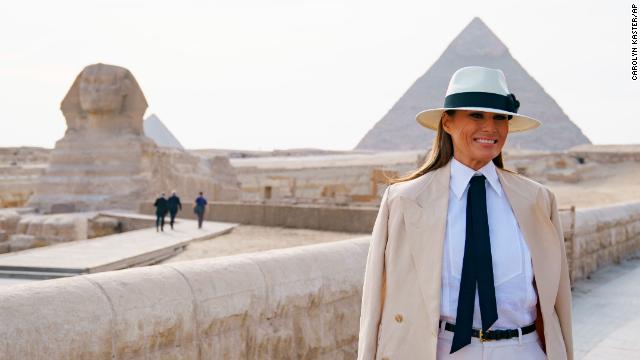 President Donald Trump talked about first lady Melania Trump’s tour of Africa, and said the trip was “both beautiful and sad.”

“Our magnificent first lady Melania just returned from an incredibly successful trip to Africa,” he said, telling the crowd that the two talked about it.

The first lady was clearly struck by the poverty in some of the places she visited.

“It was an incredible trip … and yet such incredible, in some cases, poverty. They need help,” he said, not pointing to any specific stop on her four-country tour.

“It’s both beautiful and sad. It’s got every kind of emotion, but you probably saw her travels,” Trump said.

He continued: “It opens your eyes to what’s going on around the world. You’re all very lucky in Ohio, that I can tell you.” 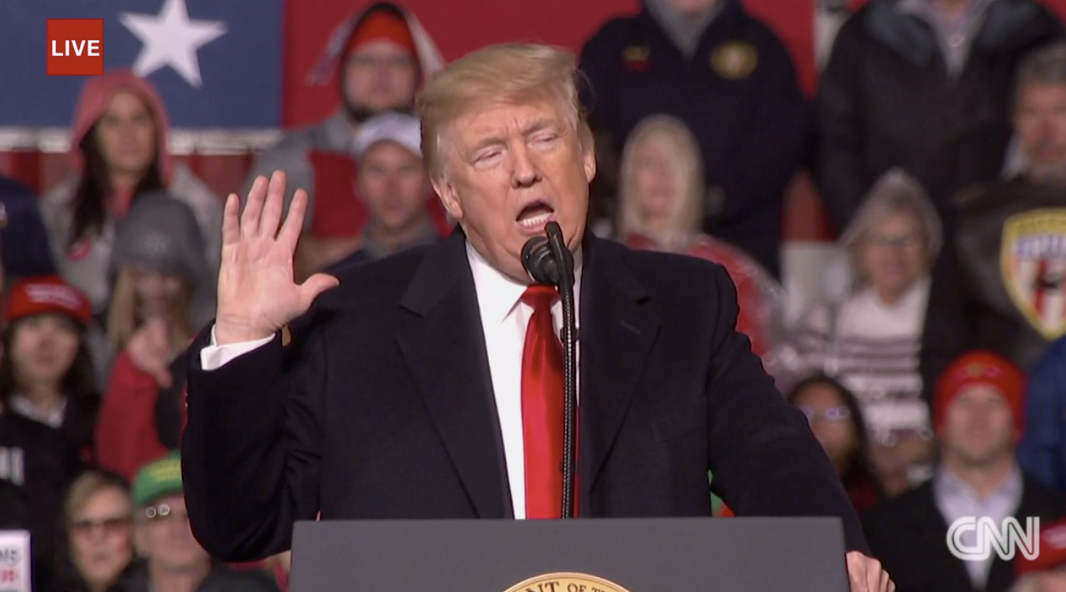 The crowd in Ohio is fired up and has already launched into multiple rounds of boos 10 minutes into President Trump's rally.

First, Trump began to knock the Obama administration on jobs, which prompted a sustained round of boos from the audience lasting nearly 10 seconds.

“The previous admin sent manufacturing jobs,” Trump said before he was cut off.

“Other than that, you like them very much,” he joked.

A few minutes later, he began to attack the media, telling the crowd to turn around and look at the cameras.

“One little mistake and they try to destroy your entire career. Alright look at this. Seriously look at the magnitude of it. Look at the number of media back there,” he said to more boos. 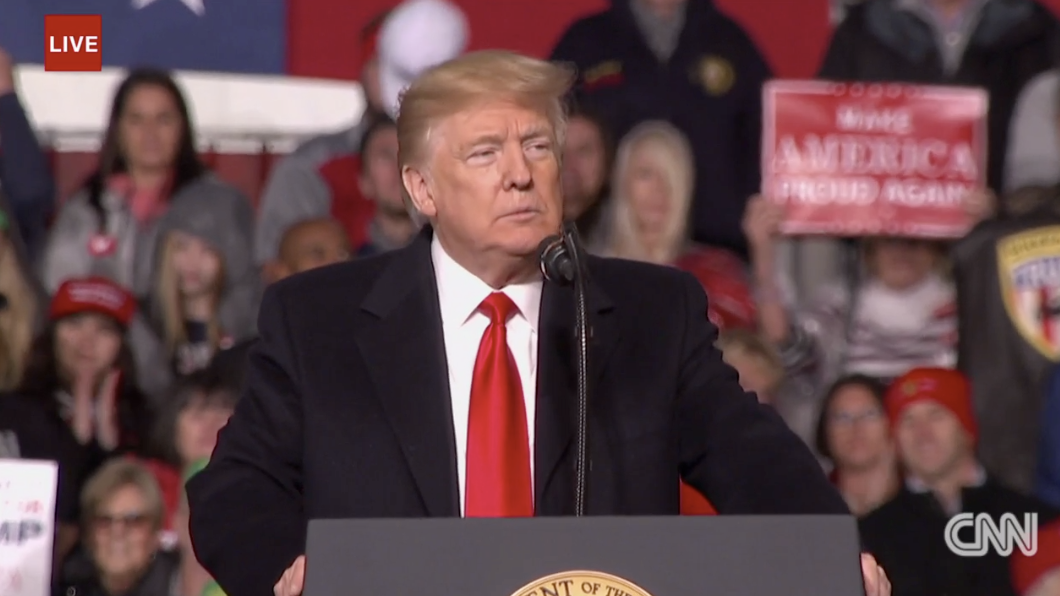 “Earlier today, we secured the release of Pastor Andrew Brunson,” Trump said to applause in the open-air fairgrounds venue.

Brunson, he said, is “free from jail” and is “in the air” on his way to Germany, where he will undergo a “brief check.”

Moments after the President's remarks, Brunson landed at Ramstein Air Force Base in Germany, according to a senior administration official. Brunson is expected to spend a short time at Ramstein.

A White House spokesman said Friday that Brunson is expected in Washington on Saturday.

Some background: A Turkish court freed Brunson on Friday two years after he was detained, charged with helping to plot a coup against President Recep Tayyip Erdogan.

The case had soured relations between Turkey and the United States, heightened by Trump's defense of Brunson as his administration elevated religious freedom as a cause.

The court on Friday sentenced Brunson to three years and one month in prison, but chose to release him based on his time already served, as well as his manner during the proceedings, his lawyer said. Prosecutors were seeking a 10-year jail term. 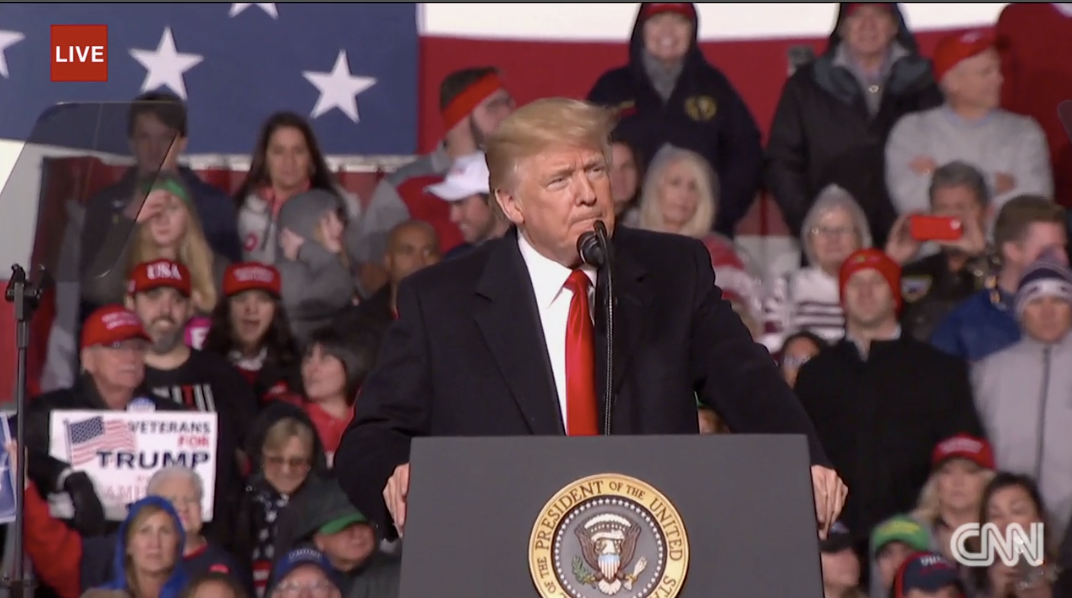 President Trump has taken the stage at his rally in Ohio.

The President's rally comes hours after a Turkish court freed US pastor Andrew Brunson two years after he was detained, charged with helping to plot a coup against President Recep Tayyip Erdogan.

Earlier today, Trump addressed the pastor's release, and said Brunson is in "good shape." He added that Brunson is traveling to Germany for a full checkup before coming to the United States.