President Trump took aim at Democrats and praised his administration's work at a campaign rally tonight in Tennessee.

Trump was in Nashville to campaign for Republican Rep. Marsha Blackburn, who's looking to replace the retiring Sen. Bob Corker.

If you missed it, here are Trump's key quotes: 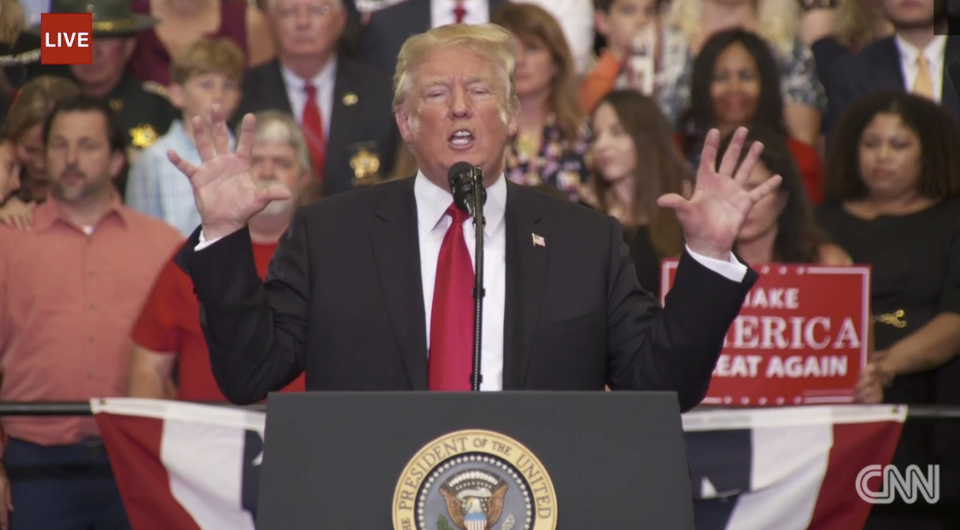 President Donald Trump is still talking about his hands.

During a portion of his speech on infrastructure, he said, “We will build new strength into our country, we will breathe new hope into our communities, and we will do it all with these big beautiful hands, look at these hands.”

Trump flexed his hands to applause.

President Trump is not only doubling down on calling MS-13 members “animals,” he’s making it a campaign rallying cry.

Describing the gang members as “not human beings” and “bloodthirsty,” Trump did a call and repeat.

“What was the name?” he said, pointing to his ear.

President Trump called out his national security adviser during a portion of his speech on opening up the US Embassy in Jerusalem.

“Where is John Bolton? Great John Bolton," he said. "They think he’s so nasty and so tough that I have to hold him back, okay?"

"Pretty great — and he’s doing a great job, and you better get some rest because we have some pretty big negotiations," he added.

Again recalling his 2016 campaign victory, President Trump hit Hillary Clinton and one of her campaign surrogates, the rapper Jay-Z, who Trump said used “filthy” language that made the President look “clean-cut” by comparison.

“The only way she filled up the arena was to get Jay-Z,” he said to boos.

“And his language was so filthy that it made me, like, the most clean-cut human being on earth. It’s true.”

Trump continued, “He’d stand up there before those crowds, and by the way, without any musical instruments, I had much bigger crowds than he was drawing. But he’d stand up before those crowds, and he’d use the F-word and Hillary would sit back — oh I’m in trouble, oy, please don’t have him use that kind of language anymore, and then he’d finish, and everybody would leave, and she’d be standing up making a speech to 400 people.”

Trump, of course, was caught in a leaked 2005 Access Hollywood video saying of women that he felt entitled to "grab them by the pussy," and also called Sen. Ted Cruz a "pussy," repeated words of an audience member.

Without naming McCain, Trump said his administration thought they had enough votes to repeal Obamacare in a story recounting that historic night.

"We had it done, folks. It was done," the President said. "And then early in the morning, somebody turned their hand in the wrong direction."

The remark drew a round of boos from the crowd.

"That cost our country a lot," he said. "That was a very, very terrible thing that happened that night."

President Donald Trump lambasted "Chuck and Nancy" and told supporters in Tennessee at a rally on Tuesday that Democratic Senate candidate Phil Bredesen would do the bidding of Democratic congressional leaders.

Trump was in Nashville to campaign for Bredesen's Republican opponent, Rep. Marsha Blackburn, in the race to replace the retiring Sen. Bob Corker.

Bredesen is, in fact, a popular former Nashville mayor and Tennessee governor, but he last ran for public office in 2006. He has led Blackburn in recent polls.

"If Bredesen were ever to get elected," Trump said, "he would do whatever Chuck and Nancy -- remember the term, 'Chuck and Nancy?' They don't want the wall, they want open borders, they're more interested in taking care of criminals than they are of taking care of you -- Bredesen donated a lot of money to the campaigns of Barack Obama and Hillary Clinton."

"Crooked Hillary," Trump added, as the crowd chanted "lock her up."

Trump also claimed that Pelosi "loves MS-13," the gang whose members Trump claimed are being deported "by the thousands." 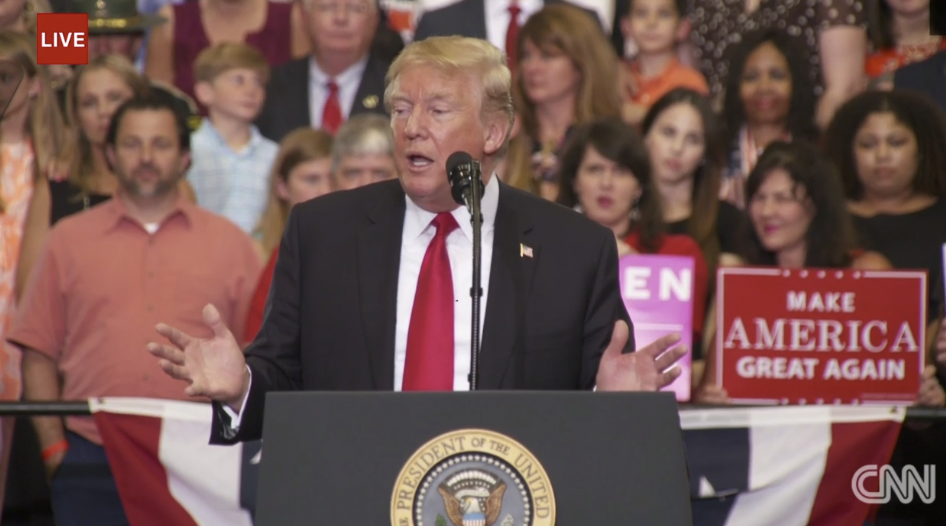 Last week, he demanded the Justice Department look into whether the Obama administration planted a "spy" in his campaign, although US officials have told CNN that the confidential source was not planted inside the campaign.

Tonight, Trump repeated the claim to his supporters at a campaign rally in Tennessee.

"Is there anybody in this big, beautiful arena right now that's infiltrating our campaign? Will you please raise your hand? That would take courage, huh? No, look, you take a look what's going on. Never in the history of our country has something taken place like took place during this election." 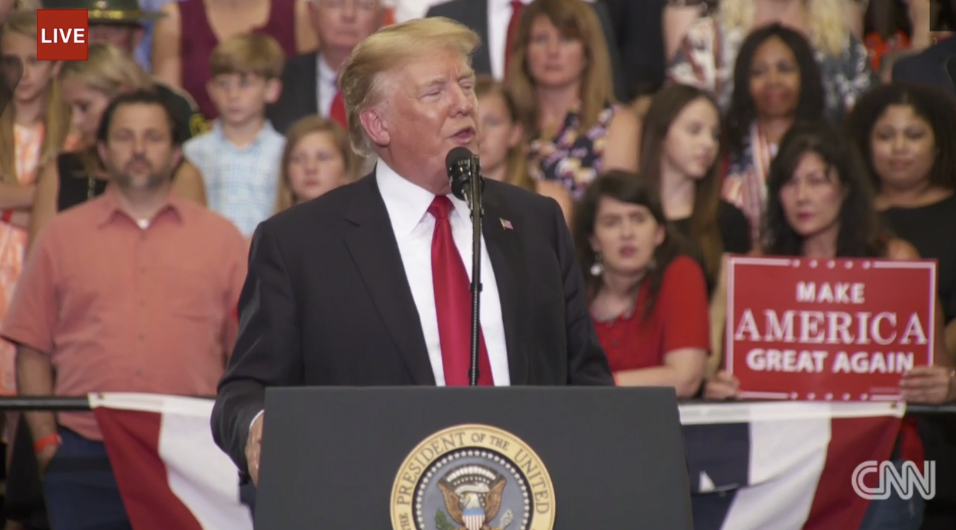 "I never heard of this guy," the President said. "Who is he? He is an absolute total tool of Chuck Schumer."

"He's a tool of Chuck Schumer and, of course, the MS-13 lover Nancy Pelosi."