Our live coverage of President Trump's trip to Mississippi has ended. Scroll through the posts below to see how it unfolded. 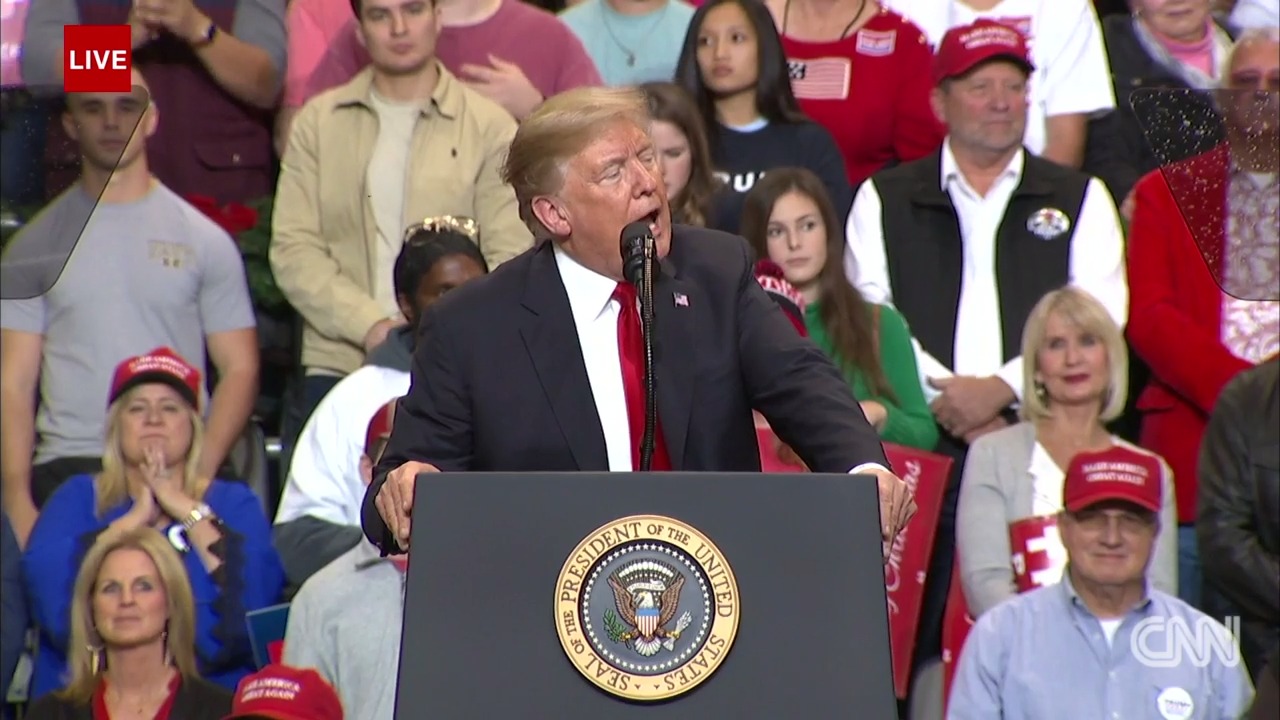 Amid disputes with his own government over climate change and Saudi intelligence, President Trump decried what he called the "deep state" in a rally on Monday.

Without making specific reference to any one topic, Trump said he was working to rid the government of careerists who might not share his views.

"This is the greatest political movement in the history of our country. There’s nothing like this. Nothing like this has ever happened. And you still have deep state. But one by one, we’re getting them out," he said in Mississippi. 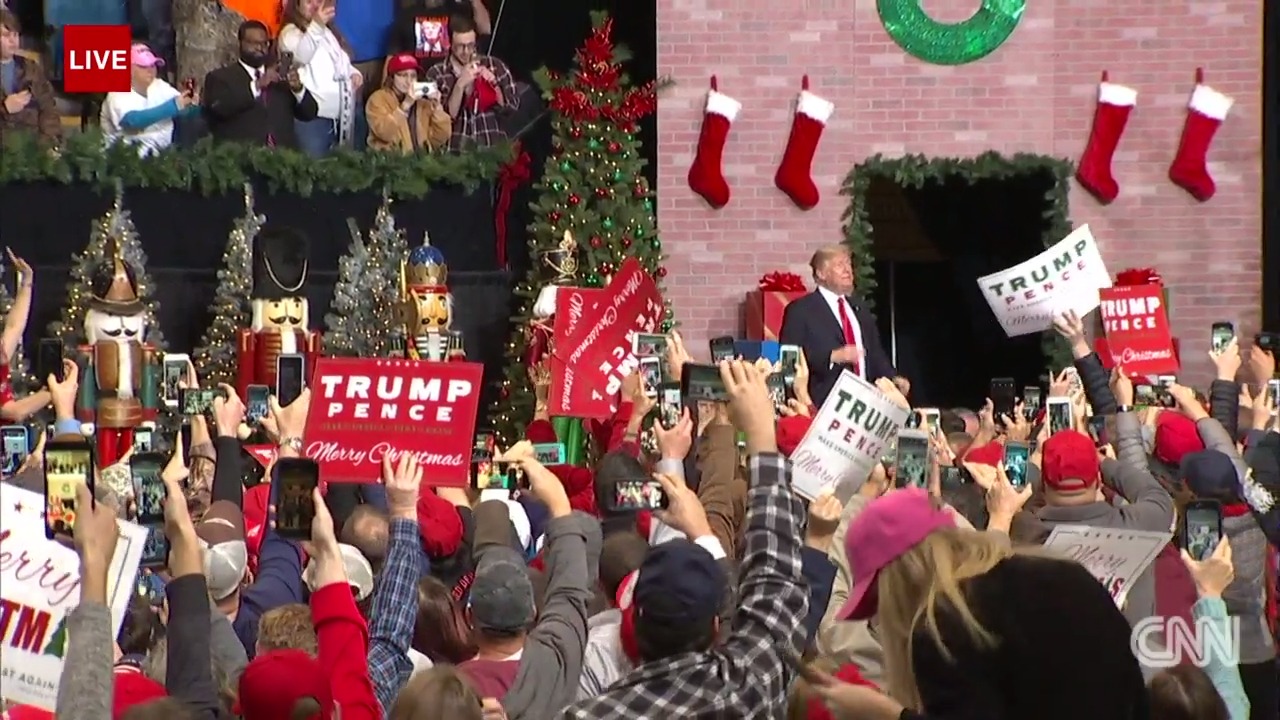 President Trump took the stage Monday night at a campaign rally in Biloxi, Mississippi, and urged his supporters to vote for Republican Sen. Cindy Hyde-Smith.

"I am asking every citizen from every party, community, background, race, color, creed, religion for your support tomorrow: Cindy Hyde-Smith," Trump said. "I need the great people of Mississippi to send a message to crying Chuck Schumer, Nancy Pelosi, Maxine Waters, the radical Democrats by electing Cindy."

Vice President Mike Pence, who introduced Trump to the stage, blasted Espy, saying he was "too liberal for Mississippi."

"That's why Mississippi has to send Cindy Hyde-Smith back to the United States Senate," Pence told the crowd.

President Trump, sitting next to Sen. Cindy Hyde-Smith, said the Republican lawmaker's comments about "public hanging" were "sad and a little flip."

"There was an apology made and I heard that loud and clear," he said at a Mississippi roundtable Monday night.

The President continued: "I heard an apology loud and clear. I know where her heart is. And her heart is good."

Some background: Hyde-Smith joked about going "front row" to a "public hanging" in a video posted to Twitter earlier this month, prompting her African-American opponent to call her comment "reprehensible." She faces former Democratic Rep. Mike Espy in a runoff election on Tuesday.

The comment called up dark memories of lynchings in the state. Asked about it in a recent debate, Hyde-Smith said she would "certainly apologize" to anyone who was offended, but then pivoted to an attack on her opponent.

The Mississippi Senate runoff was expected to be a quiet finale to the 2018 election season but instead has turned into a nationally watched affair.

Republican Sen. Cindy Hyde-Smith's comments about attending a "public hanging," along with a series of other controversies, have led to critical media coverage and several companies such as Walmart and Google publicly disavowing her.

But while her statements and actions may make Tuesday's special Senate election a closer affair than it might otherwise have been, make no mistake: she is a heavy favorite against Democrat Mike Espy. After all, Mississippi is as red as they come.

Trump will now head to a roundtable on the FIRST STEP Act in Gulfport and then another rally in Biloxi. 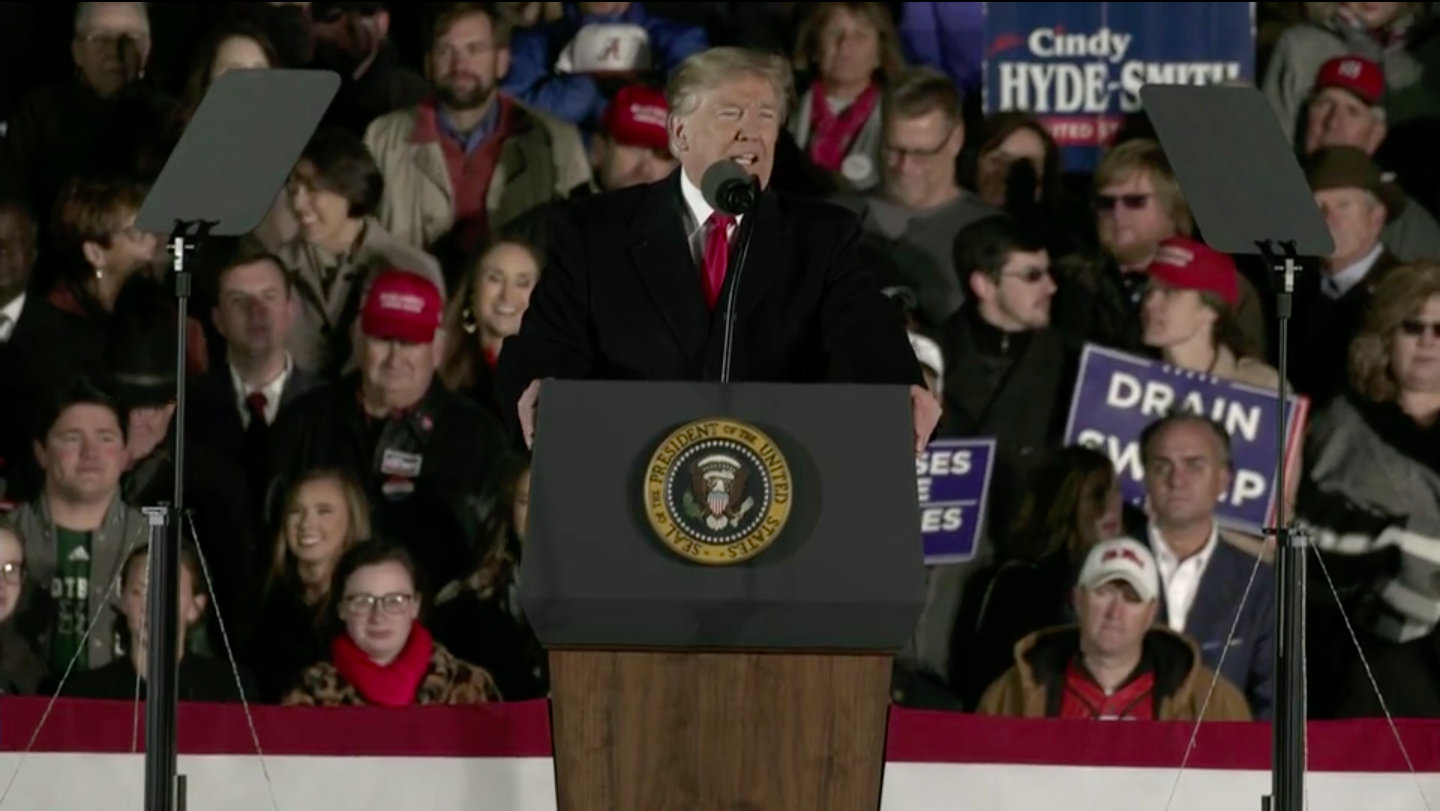 President Trump blasted the Russia investigation as “witch hunt garbage” as he boasted of his "greatest political movement" in history.

“We have had a lot of phony stuff like the Russian witch hunt garbage,” Trump said, but added that the US has “never had a movement like this.”

Earlier Monday, Trump took to Twitter to attack special counsel Robert Mueller and his investigation into Russian meddling during the 2016 US presidential election.

Here's what the President tweeted: 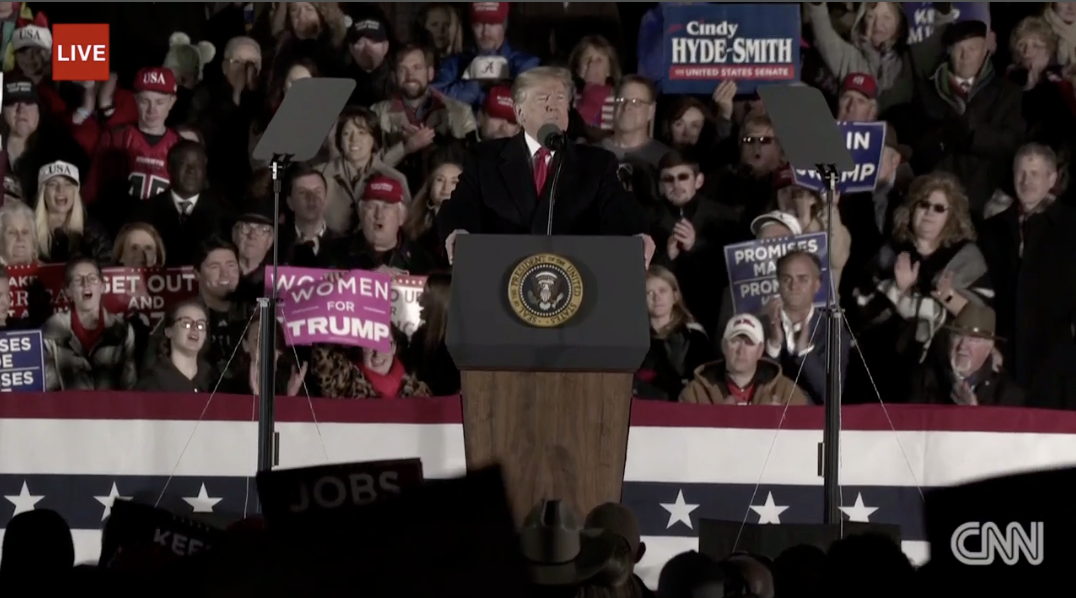 On the same day that General Motors announced it is closing plants in the US, President Trump boasted that his administration "found the magic wand" for manufacturing in the United States.

"We have a lot of companies moving in," he said, adding that the number of companies making products in the US is "actually going to be increasing."

And if there was any concern that the United States-Mexico-Canada Agreement trade deal sounded a little too much like the iconic Village People tune, Trump has fully embraced it.

"The USMCA, like YMCA, the song," he said, breaking out into a little song.

He called the deal a "tremendous victory" for Mississippi's farmers, manufacturers, and auto workers. 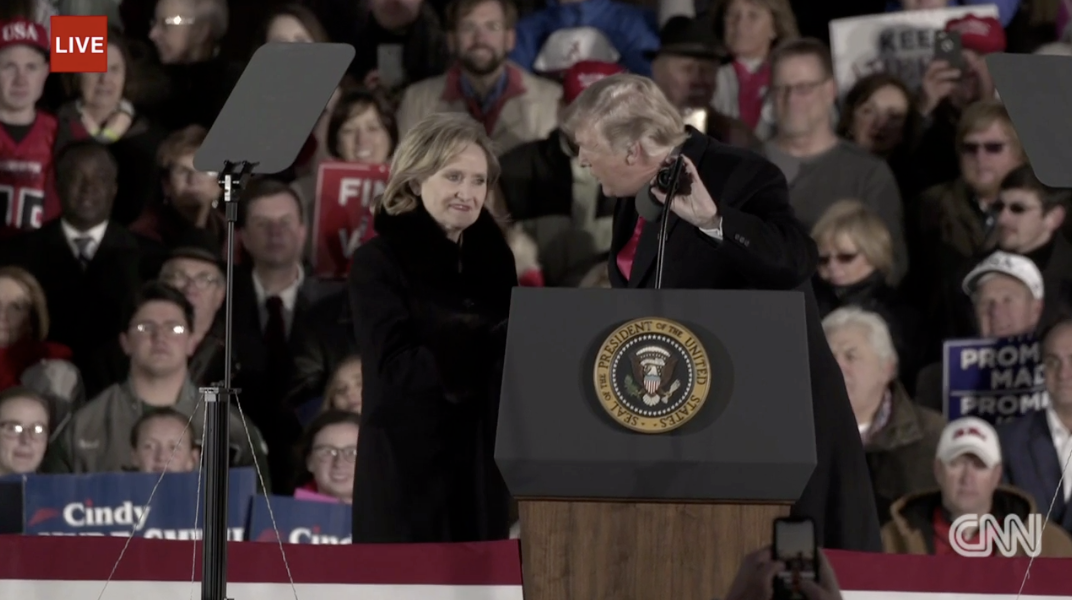 President Trump encouraged the crowd in Tupelo to "get out" and vote in Tuesday's runoff election.

"Don't take any chances," he warned. "Just assume you have to vote... or send back your ballots or do whatever you have to do but just get it done."

Even though the results of the 2018 midterm elections have been widely decided, Trump suggested that a win for Democratic candidate Mike Espy would "revoke" Republican wins.

"We cannot allow Nancy Pelosi and Chuck Schumer to revoke that victory by winning the state of Mississippi," he said.

Republican Sen. Cindy Hyde-Smith, he said, "votes for us and she votes for Make America Great Again and America First."

He added, falsely, that the Democratic Party's platform today is "radical socialism and open borders."

He also drew contrasts with Espy, citing his support for "late-term abortion on demand," "a total government takeover of healthcare," and "free taxpayer funded healthcare to illegal aliens."

"Mike Espy would rather protect illegal aliens than the people that live in Mississippi," Trump said.

He continued: "We don’t need to give Schumer another vote to block our judges and abolish our borders."

Trump later looked ahead to the 2020 campaign, quipping, "I do really want to run against a true socialist… that’s going to be a very interesting fight."

He also brought Sen. Lindsey Graham, a Republican from South Carolina, to the stage, who reminded the crowd of Hyde-Smith's vote on then-Judge Brett Kavanaugh.

"When Kavanaugh needed your senator, she was there. I want you to remember what they will do on the other side," Graham said, adding, "I want you to show up Tuesday. We’re going to start over in 2019 and if you like Kavanaugh there’s more coming."