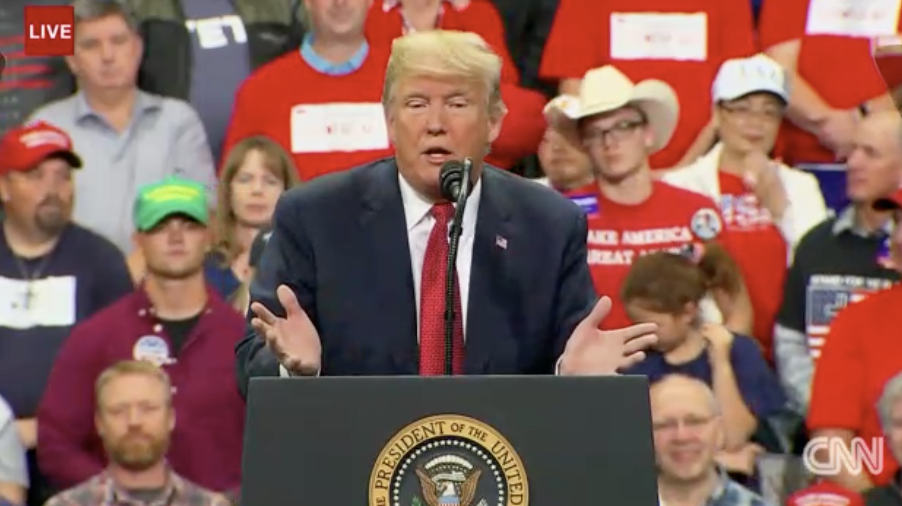 President Trump accused Democrats of wanting to take away pre-existing conditions coverage, despite the fact that 20 Republican state officials — including Attorney General Josh Hawley, who is running for Senate in Missouri — signed onto a federal lawsuit seeking to strike down former President Barack Obama’s Affordable Care Act as unconstitutional.

“Republicans want to protect Medicare for our great seniors who have earned it and they have paid for it,” Trump said. “And we will always protect Americans with pre-existing conditions, we are going to take care of them.”

He added: “Some of the Democrats have been talking about ending pre-existing conditions.”

Trump then suggested the United States could get more money from China to pay for pre-existing conditions.

Why this matters: Health care has become a difficult issue for Republicans to talk about during the 2018 midterms, with Democrats turning the issue into the focal point of their television advertising campaigns, debate strategies and stump speeches.

That means Republicans are having to adapt to a shifting political reality: Republicans who called for the repeal of Obama’s health care law — which features some popular elements, like protections for those with pre-existing conditions — are on the defensive.

Trump, who earlier attacked Democrats for backing a “Medicare for All” plan, simply looked to combat the attacks by arguing, without much back up, that Democrats wants to get rid of pre-existing conditions.

“We are going to take care of pre-existing conditions folks,” he said. “Remember that.” 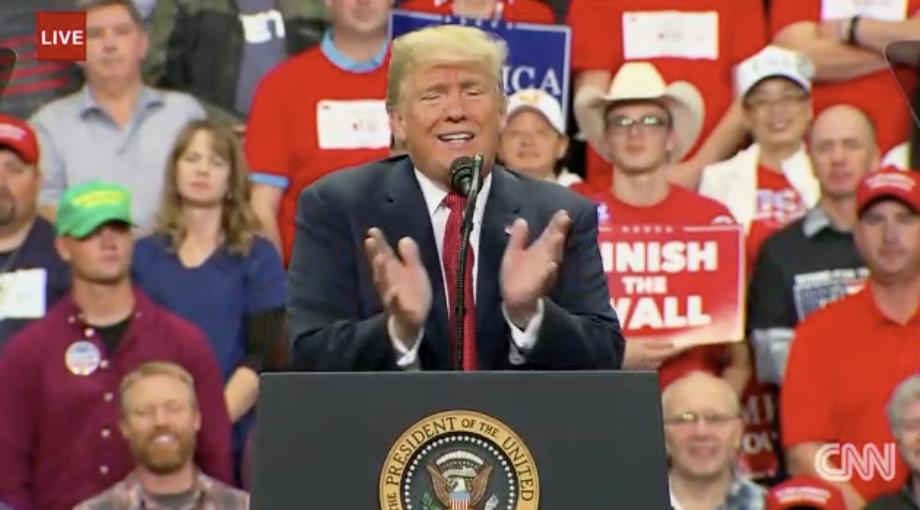 President Trump slammed former Rep. Keith Ellison at his rally tonight, but not for what you might expect.

Ellison has publicly been embroiled in allegations of domestic violence, with his former girlfriend, Karen Monahan, accusing him of abuse.

Trump, noticeably, didn’t mention those accusations and instead hit Ellison for his liberal views on health care and immigration.

“Ellison is the number two official in the entire Democrat Party and he recently marched in a parade wearing a shirt that said I do not believe in borders,” Trump said. “By the way, you don’t have borders, you don’t have a country. Keith Ellison’s Democrat party embraces radical socialist and open borders.”

While Trump didn’t mention it, a number of supporters had homemade signs that knocked Ellison for the abuse allegations. 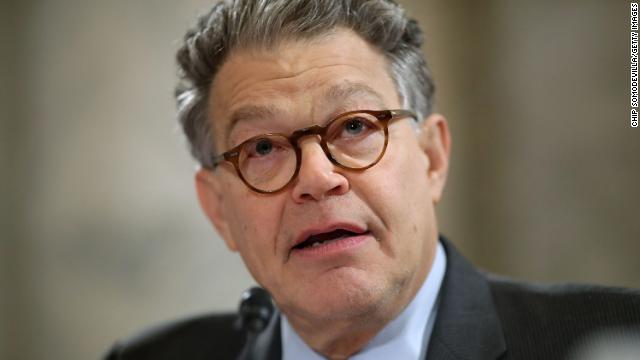 Trump mentioned Franken as a way to knock Sen. Tina Smith, who was appointed to Franken’s seat and is running in 2018.

“Nobody knows who the hell she is,” Trump said of Franken. “She was appointed, she took a wacky guys place. That guy was, he was wacky. Boy did he fold up like a wet rag.” 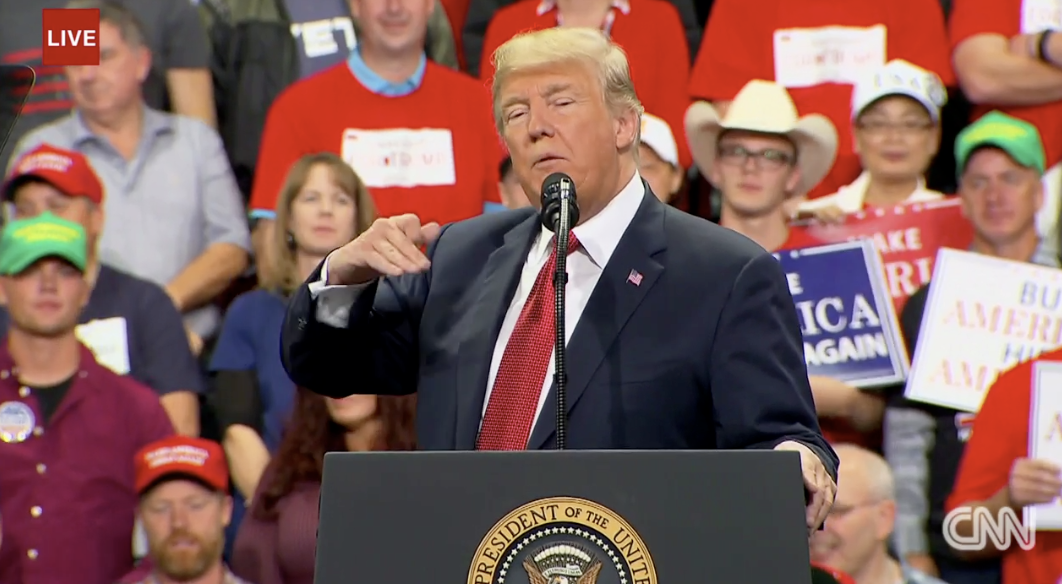 He said their "rage fueled resistance is starting to backfire," along with their politics of "anger and destruction."

The remark sparked a massive cry from the crowd, who chanted, "We want Brett Kavanaugh." 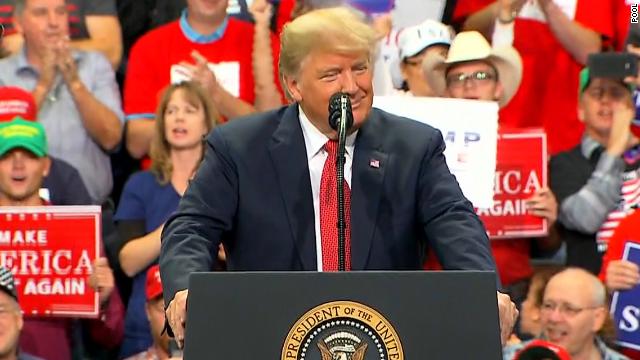 President Donald Trump touted his trade agenda in Rochester, Minnesota, on Thursday, slamming NAFTA and patting his administration on the back for the newly agreed to USMCA.

“NAFTA has been one the great disasters of all time and now we have a great and fair deal,” he said. “We have a fair deal.”

On China, Trump said they want to make a deal but aren’t ready yet.

Why this topic matters here: Trump is speaking in the heart of Minnesota’s soybean and pork counties. Many producers in the area were worried about Trump’s trade policy and actually supported NAFTA.

Soybean producers are also heavily dependent on the Chinese market: One-third of all American soybeans end up in China.

Dan Feehan, the Democrat running to represent the district Trump is rallying in on Thursday, spent the afternoon door knocking around the Mayo Civic Center, believing that anyone in the area who was home while President Trump was in town would be more likely to vote for him.

“For us, nothing has changed,” he said in an interview with CNN before Trump took the stage. “First, we take it as a good sign that we are doing something right and he has to take a day to campaign here.”

He added: “For us, this is a chance to reach people, that is why we are door knocking tonight. My view is if anyone happens to be home to night, they are open to hearing my message.”

Feehan, a veteran and top Democratic recruit, is running against Jim Hagedorn, a longtime Republican official who has run for Congress three other times.

Unlike some Republicans, Hagedorn has run towards Trump, who won Minnesota’s First Congressional District by 15 percentage points in 2016.

Feehan is banking on the fact that voters who voted for Trump just two years ago are looking for someone to be a check on him in Congress.

“The power of the President coming to Rochester should be a compelling thing,” he said. “I am in Rochester right now, I don’t feel and energy or any of the enthusiasm that I felt in 2016 and I think that is a by product of his policies.” 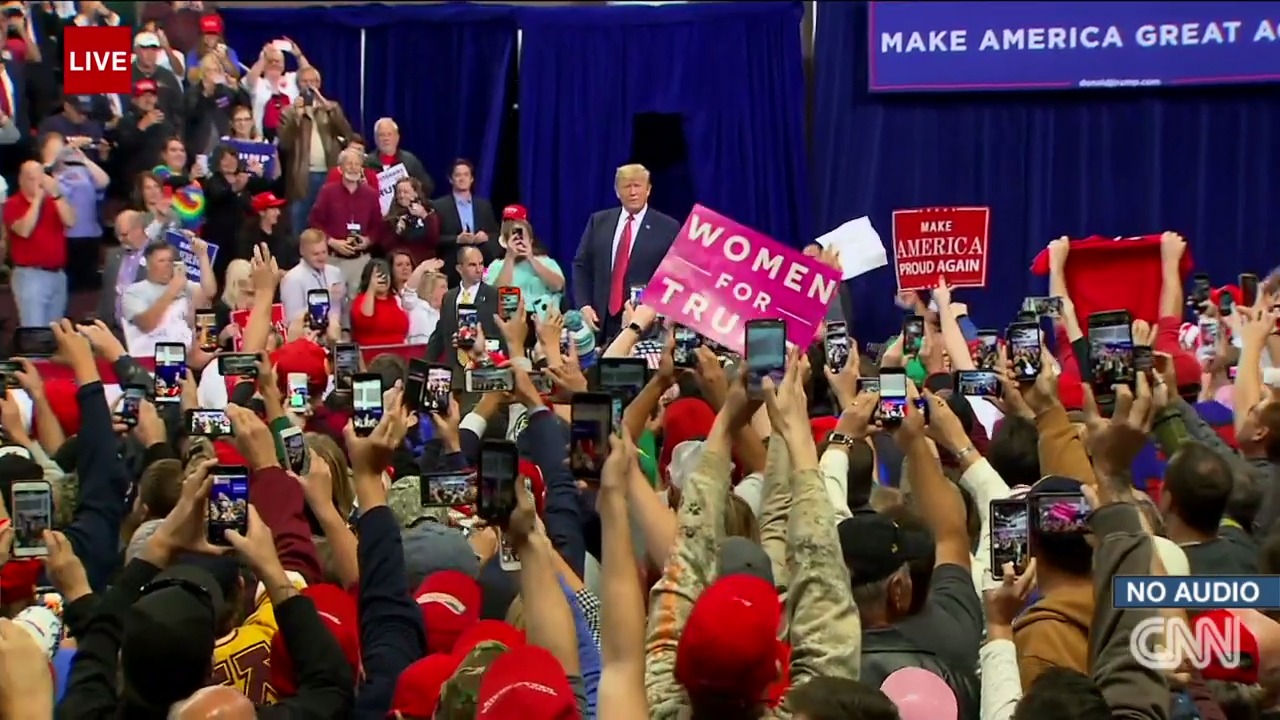 The rally, at the Mayo Civic Center, takes place in the heart of Minnesota’s First Congressional District, where Democrat Dan Feehan is running against Republican Jim Hagedorn to replace outgoing Rep. Tim Walz, who is running for governor.

The district is a prime pick up opportunity for Republicans given Trump won the district by 15 percentage points in 2016.

In fact, Minnesota is home in 2018 to an open gubernatorial contest, two US Senate races and four highly competitive House matchups, making the North Star State the center of the midterm universe. 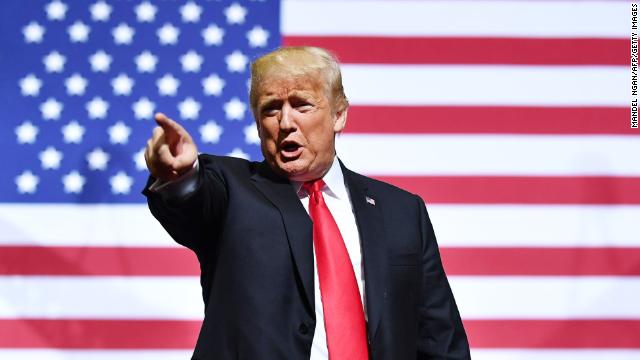 About the Kavanaugh investigation: Members of the Senate are reviewing the FBI report. The investigation was initiated after last week's hearing, where Christine Blasey Ford accused the judge of sexual assault.

At a rally on Tuesday, Trump mocked Ford's testimony during a rally in Southaven, Mississippi.

The next day, White House press secretary Sarah Sanders defended Trump's mockery, saying he was "stating the facts." She also accused Senate Democrats of "exploiting" her, even as key Republican senators admonished Trump over his comments.