He said he didn't believe the situation was as bad as the photos made it seem and that he initially thought the situation would be good politically for Republicans.

Trump then described how border facilities are nicer under his administration than under Obama.

"That’s the one thing that I learned, ok? I saw it — but what we have is two extremes — and I liked it. I said, 'Hey, this is fine for us,'" Trump said of the controversy.

President Trump said the one thing he's taken away from the family separation crisis on the southern border is that the detention facilities where undocumented immigrants are being held are nicer now than they were under President Barack Obama.

Trump, speaking in South Carolina Monday night, contrasted the images released by his administration with 2014 photos that have spread in recent weeks. He said the images show him the detention facilities have improved.

"What I learned was one thing: Our facilities are cleaner, better kept and better run, that's the one thing I learned," he said. 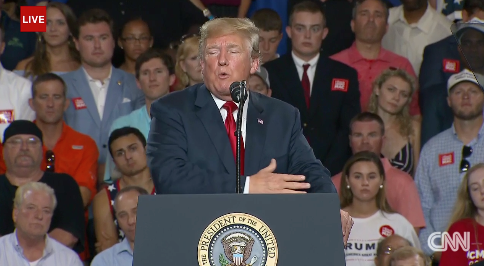 President Trump went after Jimmy Fallon again tonight after "The Tonight Show" host expressed regret about a friendly interview during the campaign.

"Like what is it? A year and half, two years later, he's now apologizing because he humanized me. He hurt himself. So I said, Jimmy, you called me up after the show and you said thank you for the incredible -- you called them monster ratings. They were very big ratings. Thank you, Jimmy. I said don't hurt yourself by apologizing. So I said to him today on social media, I said, Jimmy, be a man. Just relax. Just relax. Incredible."

Trump is referring to a "Tonight Show" appearance he made in the fall of 2016, where the then-Republican presidential nominee let Fallon mess with his hair. The lighthearted appearance led to criticism for Fallon, who said in a recent interview with The Hollywood Reporter that he wasn't trying to "normalize" Trump or express agreement with his politics.

"I made a mistake," Fallon said. "I'm sorry if I made anyone mad. And, looking back, I would do it differently."

Fallon said in response he would make a donation in Trump's name to the Refugee and Immigrant Center for Education and Legal Services, a non-profit group that provides legal services to immigrants. 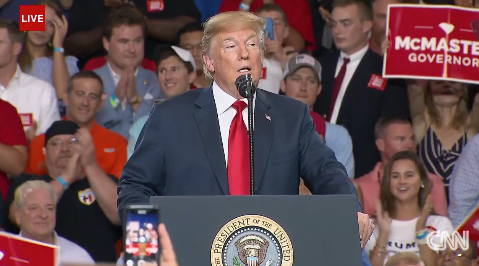 President Trump, who arrived an hour late to a rally for Gov. Henry McMaster, told a crowd in South Carolina that "it was a little rocky up in the sky tonight."

Earlier tonight, Air Force One circled Columbia for more than an hour because of a strong thunderstorm.

"I wouldn't have the courage to call Henry," he told his supporters. "Henry, you know, I said I was coming but I'm only kidding. It's raining out real bad and we're not showing up. I wouldn't do it for you."

President Trump is running late for a rally in West Columbia, South Carolina, because of a strong thunderstorm.

Air Force One circled Columbia for more than an hour.

Meanwhile, the President tweeted about Senate Intelligence Committee ranking member Mark Warner for comments he made about the special counsel's investigation at a weekend political fundraising event.

Some background: Warner was quoted by Politico over the weekend at a Democratic fundraiser as saying: "If you get me one more glass of wine, I'll tell you stuff only Bob Mueller and I know. If you think you've seen wild stuff so far, buckle up. It's going to be a wild couple of months."

This afternoon, Warner told reporters his remarks at Martha’s Vineyard this weekend were a “bad joke” and asked if he discussed classified intelligence with donors, he said: “absolutely not.”

Asked if more information was going to come out, given he told donors to “buckle up” and prepare for a “wild couple months,” he said: “The investigation is going to continue, I expect us all to follow the facts.” 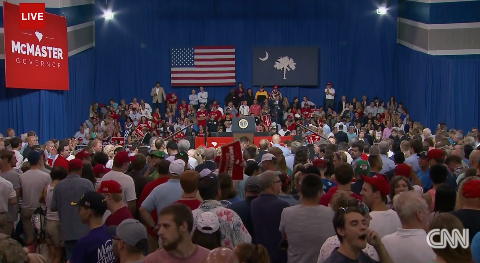 President Donald Trump is delivering remarks soon in "famously hot" Columbia, South Carolina, where temperatures hovered in the 90s for most of the day.

Trump will take the stage at a rally for Gov. Henry McMaster. The President publicly backed McMaster after he was forced into a runoff election when he failed to clear 50% in a primary earlier this month.

The President will travel to South Carolina later today for a 7 p.m. ET rally in West Columbia. The event is for Gov. Henry McMaster, who finds himself in a difficult runoff election against John Warren. Both men are Republicans.

McMaster, an early and vocal supporter of Trump who replaced former Gov. Nikki Haley when she left to become US Ambassador to the United Nations, fell short of 50% of the vote during the primary earlier this month, prompting the runoff with Warren.

Trump endorsed McMaster earlier this month, ahead of the primary.

"Henry McMaster loves the people of South Carolina and was with me from the beginning," Trump tweeted. "He is strong on Crime and Borders, great for our Military and our Vets. He is doing a fantastic job as your Governor, and has my full endorsement, a special guy. Vote on Tuesday!"