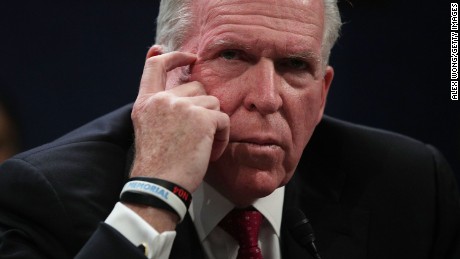 Trump declined to endorse the US intelligence community's assessment that Russia interfered in the election, saying Putin was "extremely strong and powerful" in his denial.

Instead, the US president repeatedly asked about the Democratic National Committee's email server and Hillary Clinton's missing emails.

So let me just say that we have two thoughts: You have groups that are wondering why the FBI never took the server. Why haven’t they taken the server? Why was the FBI told to leave the office of the Democratic National Committee? I’ve been wondering that. I’ve been asking that for months and months, and I’ve been tweeting it out and calling it out on social media. Where is the server? I want to know where is the server and what is the server saying? ...I have President Putin, he just said it's not Russia. I will say this: I don't see any reason why it would be, but I really do want to see the server. But I have — I have confidence in both parties. I really believe that this will probably go on for a while, but I don't think it can go on without finding out what happened to the server. What happened to the servers of the Pakistani gentleman that worked on the DNC? Where are those servers? They're missing. Where are they? What happened to Hillary Clinton's emails? 33,000 emails gone, just gone.

Russia just hosted the World Cup this year. In 2026, the US, Mexico and Canada will host the championship.

"Speaking of the football, actually, Mr. President, I will give this ball to you and now the ball is in your court," Putin said.

Trump accepted the ball and tossed it to first lady Melania Trump.

"That will go to my son, Barron. We have no question. In fact, Melania, here you go," Trump said as he gave her the ball.

Russian President Vladimir Putin said he will look into extraditing the 12 Russians indicted by a US grand jury last week — but added that he's not familiar with the fully extent of the matter.

"I don't know the full extent of the situation. President Trump mentioned this issue. I will look into it," Putin said via a translator.

The Justice Department on Friday announced indictments against 12 Russian nationals as part of special counsel Robert Mueller's investigation of Russian interference in the 2016 election, accusing them of engaging in a "sustained effort" to hack Democrats' emails and computer networks.

President Trump insisted again today that there was no collusion and that he ran a "clean campaign."

"There was no collusion at all. Everybody knows it," Trump said.

He said special counsel Robert Mueller's investigation into Russian interference in the 2016 US election has had a "negative impact" on the US-Russia relationship.

The President said he also discussed with Russian President Vladimir Putin that there was "zero collusion."

President Donald Trump said on Monday he holds both the United States and Russia responsible for the breakdown in the relationship -- adding Russia to the mix after he said earlier Monday US policies and the special counsel's investigation were responsible.

Trump said he feels that the US and Russia have "both made some mistakes."

Still, the US president again lambasted the special counsel's investigation stemming from Russian interference in the 2016 election as "a disaster for our country."

A reporter just asked President Trump about comments he made describing Russian President Vladimir Putin as a "competitor."

President Donald Trump said Monday that he raised the issue of election interference during his meeting with Russian President Vladimir Putin, a topic, he said, where Putin “has an interesting idea.”

“I felt this was a message best delivered in person,” Trump said of bringing up the 2016 election interference.

He continued, “President Putin may very well want to address it and very strongly cause he feels very strongly about it and he has an interesting idea.”

Putin said in his opening remarks that Trump brought up "so-called interference" during the meeting, noting that he "had to reiterate" that Russia had nothing to do with it.

President Trump said his meeting with Russian President Vladimir Putin had significantly improved the relationship between the two countries.

He that while the US-Russia relationship "has never been worse than it is now," he believes that has now "changed" after his summit with Putin.

"Our relationship has never been worse than it is now. However, that changed as of about four hours ago. I really believe that," Trump said.

Trump also said he believes that diplomacy with Russia, while perhaps not politically popular, is necessary.

"Nothing would be easier than to refuse to meet, to refuse to engage," Trump said. "But that would not accomplish anything."