Our live coverage of President Trump's remarks on the opioid crisis have ended. Scroll through the posts below to see how his speech unfolded.

President Trump took a brief detour from his remarks about opioid abuse prevention and drug pricing to lament what he described as the rigged system that targeted him.

He appeared to go off script when he came across a line about pharmaceutical companies “rigging the system” when it comes to pricing drugs more cheaply overseas than they do domestically.

“Many drug companies are giving European countries a better deal than they give their own country, and that has to stop,” Trump said.

“I think you know what I’m talking about,” he added, to some laughter from the conference audience.

The President joked that his remark would become a highlight from his speech at the Atlanta gathering, which had otherwise stayed largely on the topic of drugs.

“Unfortunately that will be your soundbite tonight, but that’s OK,” he said. “The system was rigged.”

President Trump at an opioid abuse conference in Atlanta highlighted the First Step Act, the bipartisan criminal justice reform bill Jared Kushner helped pass late last year, and the inmates who have received treatment behind bars as a result.

“Criminal justice reform -- I have to say -- people are getting out of prison,” he said. “Because our economy is doing so well, perhaps the best it’s ever been in our history…because of this, prisoners getting out are signing in, they’re getting jobs.”

The number of inmates who have gotten addiction treatment while incarcerated was noted in a White House press release put out on April 1, but we have not heard the President spend a lot of time talking about that.

President Donald Trump discussed drug-detecting dogs at the US-Mexico border during his remarks at the Rx Drug Abuse & Heroin Summit Wednesday, saying dogs are “the greatest equipment in the world.”

“Dogs, a certain type of German Shepherd in particular, dogs do a better job than $400 million worth of equipment. Can you believe that? Only the dog lovers would understand that, right?” Trump told the crowd.

Trump said that during a briefing from Border Patrol, he asked how $500 million of equipment at ports of entry compared to working dogs.

“They said, ‘Sir, honestly, the dogs are better.’ I said, ‘You gotta be kidding.’ It’s incredible,” Trump said, adding, “We also have a lot of dogs and they’re great dogs and we cherish them.”

Trump's history with dogs: The Trump family has broken with tradition in not having a pet at the White House, the first first family not to keep pets since before Thomas Jefferson, who kept a mockingbird and a couple of bear cubs during his presidency.

Trump lived with a poodle, Chappy, with his first wife, Ivana, who wrote in her memoir, "Raising Trump," that "Donald was not a dog fan."

Chappy, she later said, "had an equal dislike of Donald." 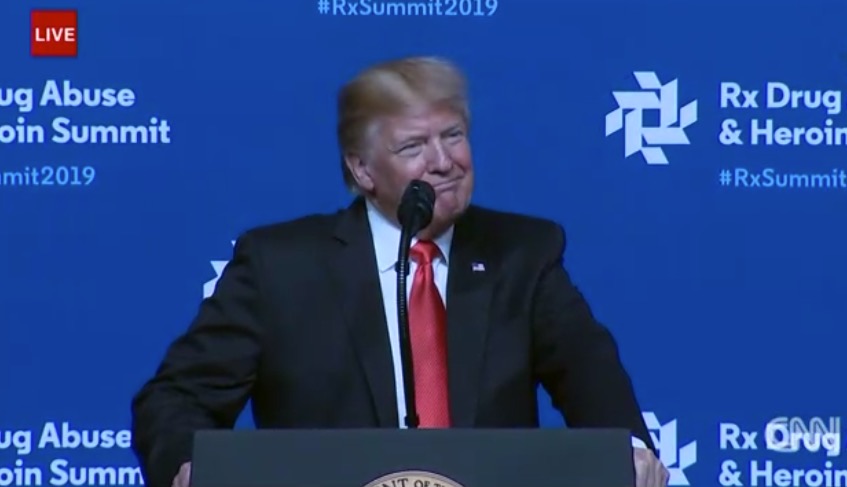 President Trump touted his administration’s border security efforts, including a southern border wall, as a great deterrent to drug smuggling at a drug abuse summit in Atlanta today.

“In the past two years Customs and Border Protection seized, of meth and cocaine and heroin and fentanyl at the southern border are up 45%. They’re going up much higher. We are seizing it all over. You probably saw the numbers today. We are detaining, capturing, call it anything you want, more people than ever before,” Trump said.

“A lot of it is drugs and drugs are being gotten by us," he added. "We are stopping the drug flow as much as we can. Soon we’re going to have a wall that’s very powerful … it will have a tremendous impact on drugs coming into our country.”

Trump called the US's immigration laws "horrible, obsolete, weak, pathetic" and blamed the Democrats for not changing them.

“We could solve the entire problem I’d say 45 minutes, but it could do a lot quicker than that ... If the Democrats would agree to do basic, common-sense things” Trump said. 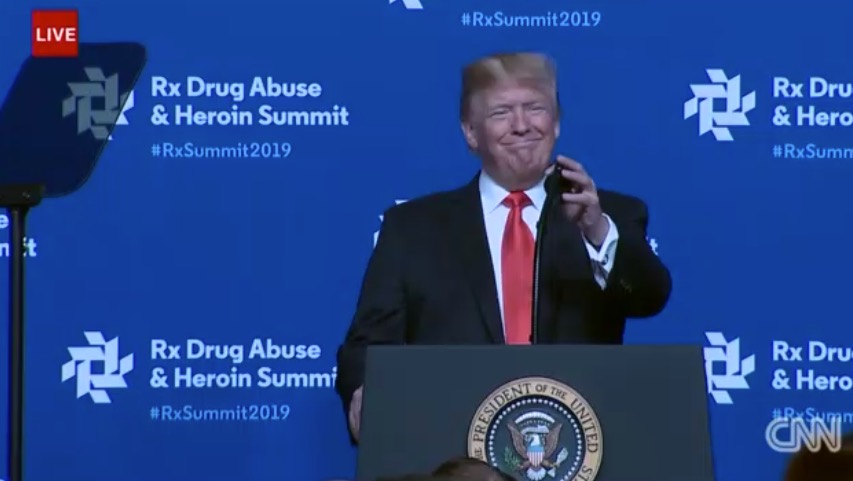 President Trump just took the stage at the 2019 Rx Drug Abuse and Heroin Summit in Atlanta, Georgia. He was introduced by first lady Melania Trump. 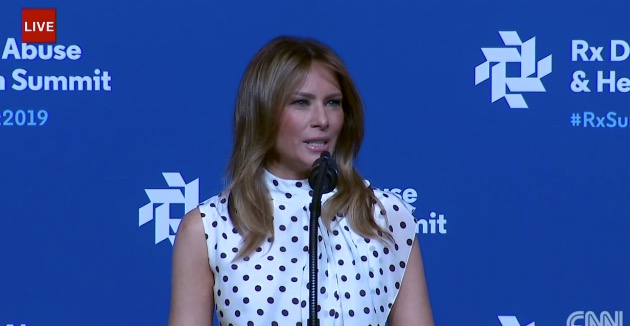 The first lady, whose "Be Best" platform includes fighting opioid abuse, said the issue is close to her heart.

The first lady said she is “committed to supporting more treatment facilities that help mothers and babies recover” from addiction and Neonatal Abstinence Syndrome, adding that the President “cares deeply” about what the group gathered for the conference is doing to help Americans affected by the epidemic.

Upon taking the stage, the President thanked his wife.

“I want to thank especially Melania, she works so hard and those moving words – even though its from your wife — so she’s maybe a little bit prejudiced in that way but I will say that she is a hard worker and has a profound commitment to building a drug-free future for America’s children,” he said.

President Trump and first lady Melania Trump just arrived in Georgia. They're on their way to speak at the 2019 Rx Drug Abuse and Heroin Summit in Atlanta.

Here's who greeted them at the airport:

President Trump told reporters at the White House Wednesday that congressional subpoenas calling for his current and former officials to testify are “ridiculous”.

“Well the subpoena is ridiculous,” Trump said when asked what he plans to do in response to the subpoenas.

In the days since special counsel Robert Mueller's full reported was released, Congressional Democrats have started their own investigations and have begun issuing subpoenas. So far, Trump's finances and numerous cases of obstruction of justice that the special counsel documented are two of their biggest focuses.

“We have been — I have been the most transparent president and administration in the history of our country by far,” Trump added, echoing his earlier morning tweet on the subject. “Now we’re finished with it and I thought after two years we’d be finished with it. No!”

Since the report's release, Trump has become newly furious at the people — most of whom no longer work for him — whose extensive interviews with the special counsel's office created the epic depiction of an unscrupulous and chaotic White House, those close to him say.

On the public side of things, over the past 24 hours, Trump has tweeted (and retweeted) 52 things.