We have "one vote" in the Senate who is "not around to vote," Trump said.

He was speaking about the Republican Senate majority, noting it's hard to get anything done with just 51 votes. 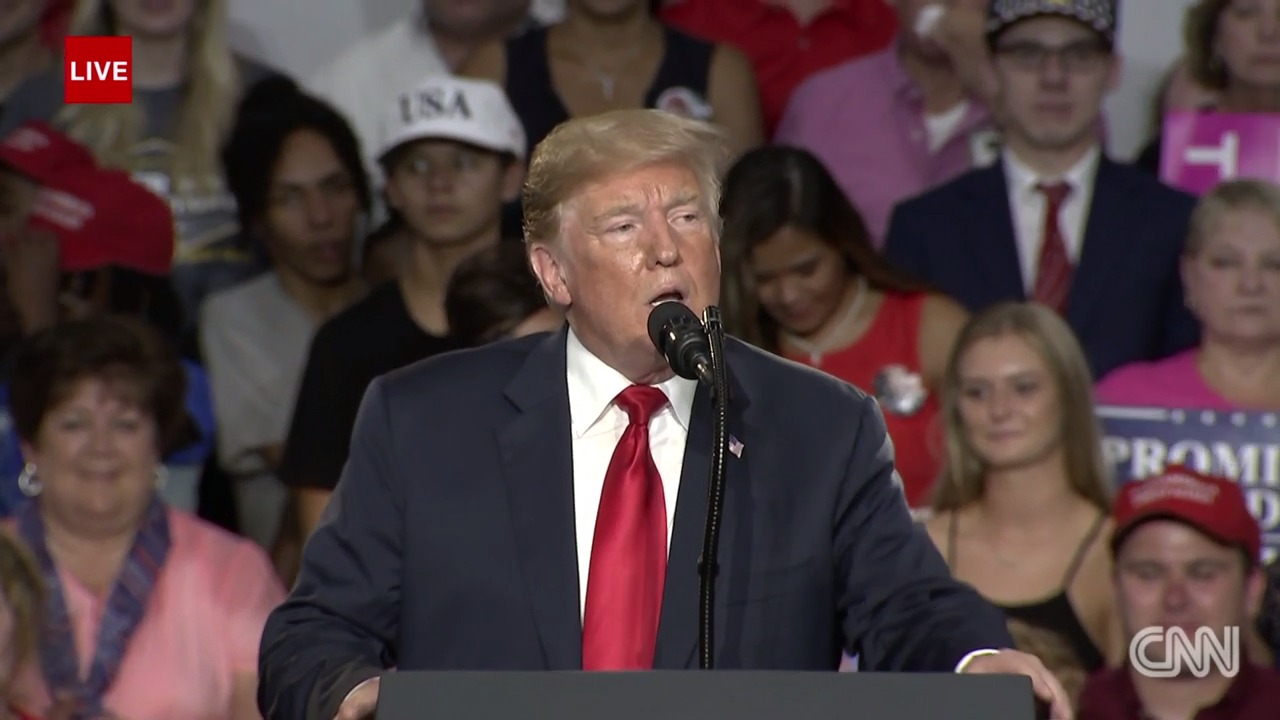 Trump's done this before.

And in response, Waters told MSNBC's Joy Reid, "This is what this con man does. He diverts attention from himself by attacking others." 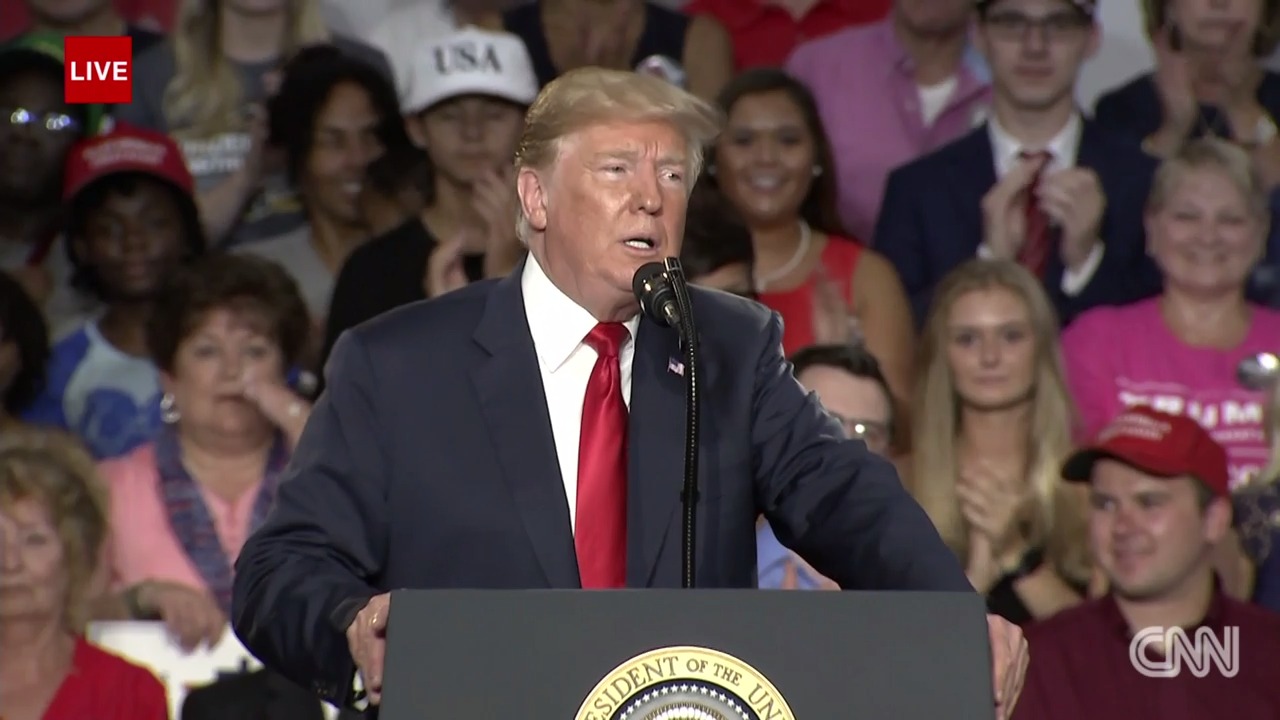 President Trump opened his Ohio rally by slamming the "elites" who didn't think he'd win the 2016 election, instead telling his supporters, "You are the elites."

The pastor giving the invocation at his Ohio rally prayed to protect President Trump from the lying liberal media.

"Tonight I pray that you will protect our president and his family with a shield of faith. Lord that shield of faith, against the fiery darts of the wicked ones. Lord, against that jungle journalism extorts the truth and distorts honesty and integrity every single day. Gets in his face with lies and mistruths and innuendos. Lord, protect him," he said. 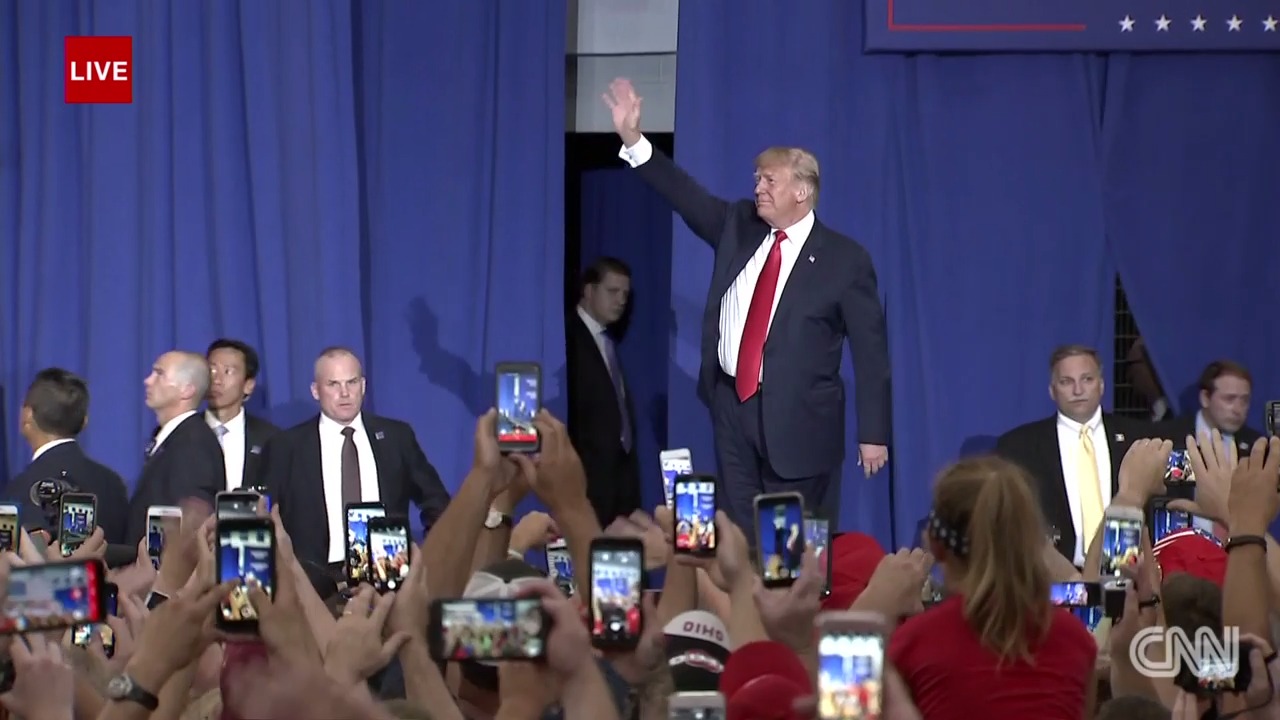 President Trump has taken the stage. You can watch live in the video player above. 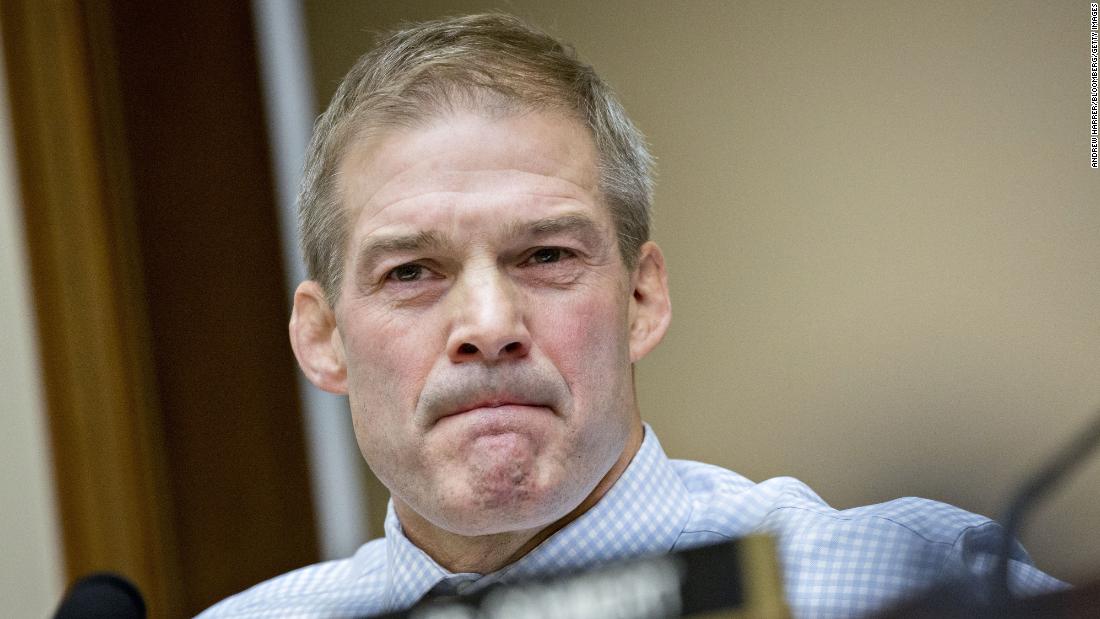 The crowd let up a big cheer when Ohio Rep. Jim Jordan was seen walking up the bleachers to greet someone.

They chanted, “Jordan! Jordan!" and someone yelled as he walked down the steps, “Speaker of the House!"

Jordan, a leader in the conservative House Freedom Caucus and former chairman of the group, announced his run for speaker of the House of Representatives in a letter to colleagues last month.

Jordan has long said he was interested in the post, but the news comes after he has faced questions about his time as an assistant coach at Ohio State University and whether he knew about alleged sexual abuse by a former Ohio State medical doctor who treated athletes there.

Jordan has repeatedly denied any knowledge of inappropriate behavior during his time as assistant wrestling coach at OSU and said Thursday that he does not believe the questions surrounding his time at OSU will affect his bid for speaker.

Update: Later, during his rally, Trump invited Jordan on stage. The crowd again chanted, "Speaker of the House!"

President Trump is about 20 minutes late, not that his supporters mind. They're currently rocking out to Barry White and the Village People's "Macho Man" and "YMCA," among other hits.

The gym at Olentangy Orange High School in a key Republican part of Delaware County, Ohio, is packed, on the floor and in bleachers on both sides of the room. 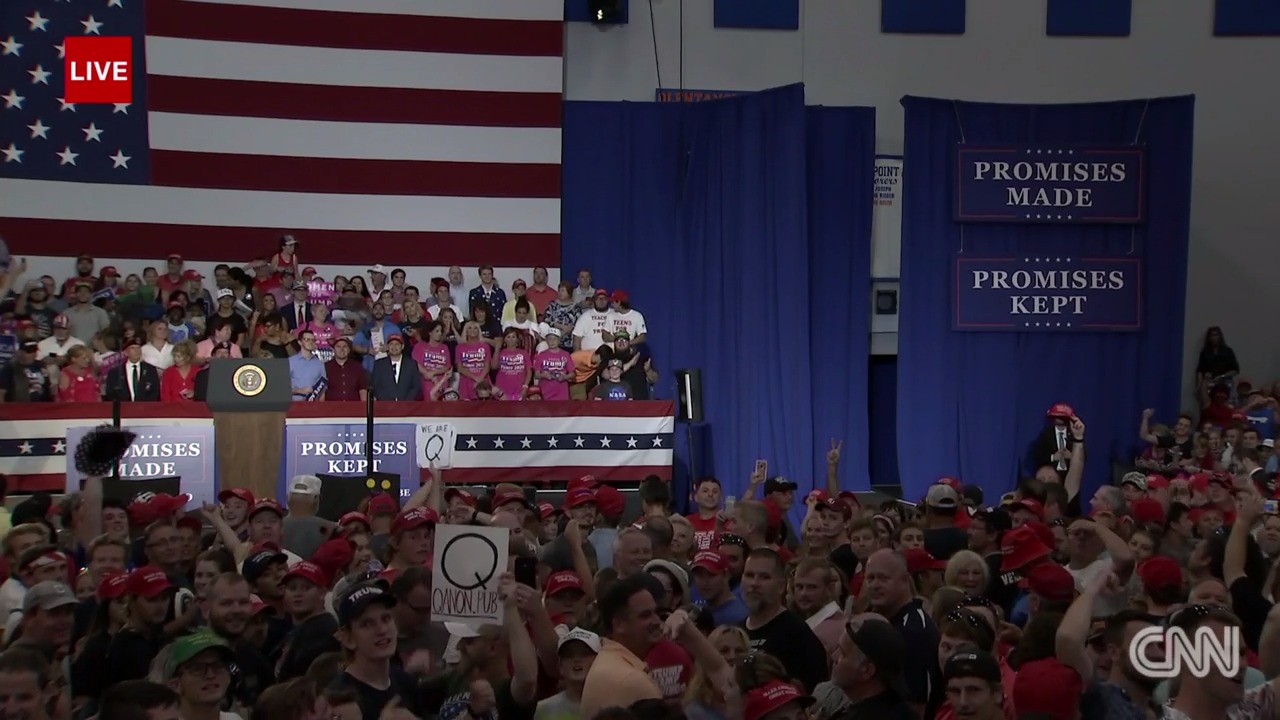 You might have seen people holding signs and wearing shirts scribbled with "We are Q" and "Q" at President Trump's rallies in Florida and Pennsylvania this week.

Looks like at least one supporter brought one tonight, too.

So, what does it all mean? The signs promote an online right-wing conspiracy persona -- who's been targeting movie stars and the Democratic Party alike.

It was an apparent reference to QAnon, a group that originated on the 4chan messaging board around an anonymous user, "Q," who claims to be a member of the US military intelligence. The group's theory, among other things, alleges that several A-list figures in the entertainment industry and the government are involved in child sex crimes and a "deep state" effort to annihilate Trump.

Users on 4chan, Reddit and the more fringe 8chan devote their time to decoding the supposedly top-secret clues -- nicknamed "breadcrumbs" -- that "Q" routinely leaves on those channels. Then, they take action -- online but also offline -- based on a free interpretation of those clues.

What the White House is saying

"The President condemns and denounces any group that would incite violence against any individual, and certainly doesn't support groups that would promote that type of behavior," she said.

President Trump has been on the campaign trail this week, packing three rallies into five days.

He held a rally in Tampa, Florida, on Tuesday. There, he told his supporters he wanted Americans to be required to show identification before casting their votes, claiming that they needed their IDs "to buy groceries" (Fact check: You don't).

Among the attendees of the Florida were people holding up signs promoting an online right-wing conspiracy persona, who's been targeting movie stars and the Democratic Party alike.

On Thursday, Trump traveled to Pennsylvania for his second rally of the week. In Wilkes-Barre, he defended his meeting with Russian President Vladimir Putin last month and decried the "Russian hoax" — comments that came just hours after his top national security officials decried Russian attempts to influence US elections.

He also told the crowd he'd use reverse psychology to get his border wall, saying that if he tells Democrats he doesn't want to build a wall, "they'll insist on building it."