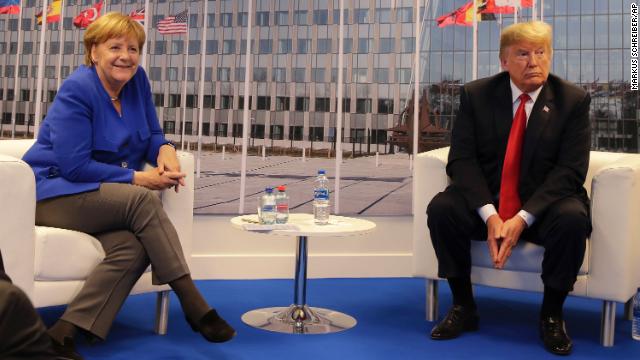 President Trump said he and German Chancellor Angela Merkel did discuss the Russian gas pipeline that funnels natural gas to Germany, but declined to address his earlier comments about Germany being "totally controlled" by Russia.

"Yes," Trump said when asked about his comments. "We did discuss that."

Instead, the US President, sitting alongside Merkel at the bottom of their bilateral meeting at NATO headquarters, said he and Merkel have a "very, very good relationship."

Trump also congratulated Merkel for having "tremendous success" and said he believes trade between the US and Germany will increase.

Merkel also did not address Trump's comments, simply saying she was "very pleased" to have an opportunity to discuss big issues like economic development, migration and trade with Trump.

This is striking difference from how Trump started the morning. Ahead of the summit, President Trump accused Germany, a close US ally, of being "a captive of Russia." He also demanded all NATO members increase their defense spending. 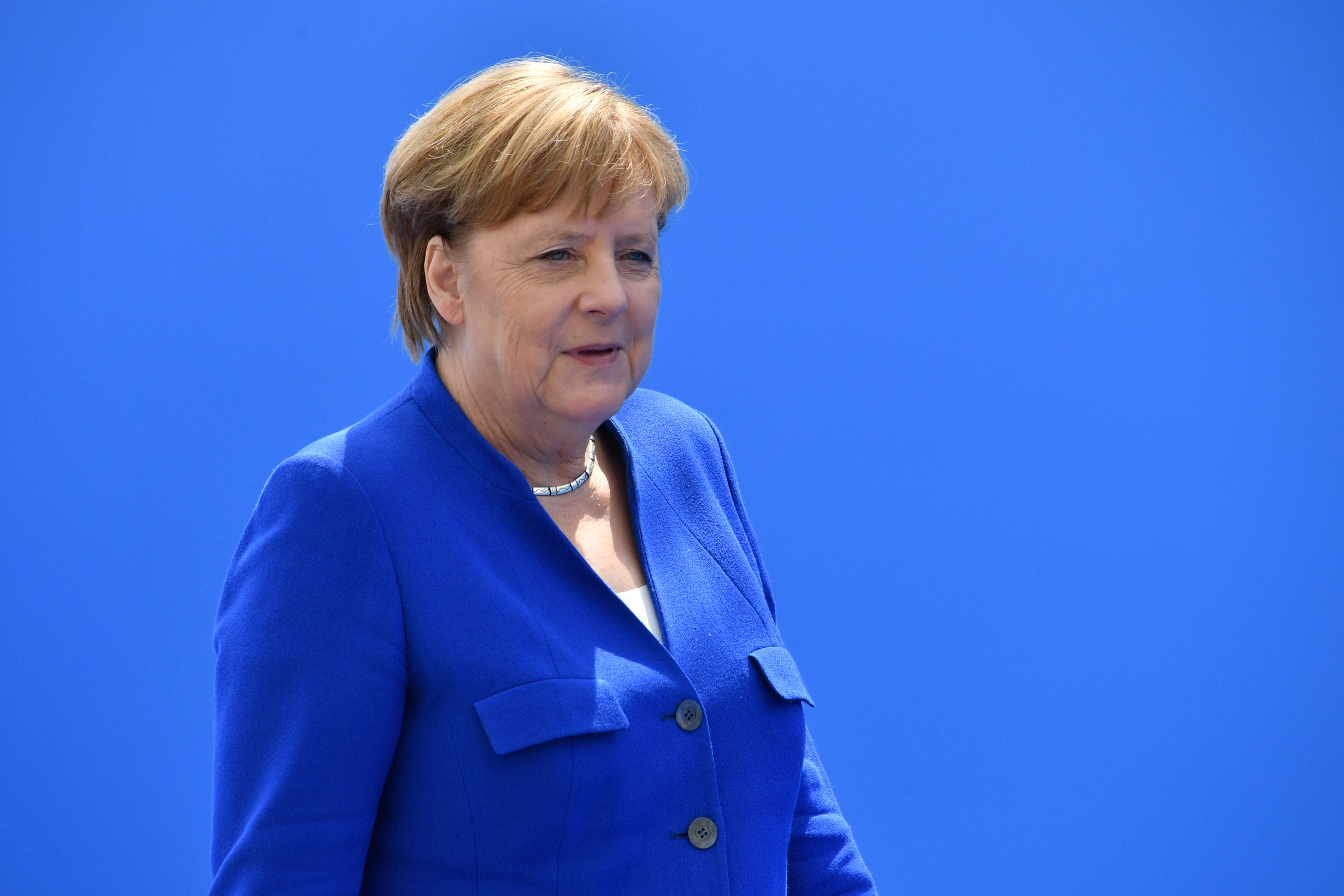 President Trump started this year's NATO summit by accusing Germany, a close US ally of being "a captive of Russia," and demanding all NATO members increase their defense spending.

Within hours of those comments, German Chancellor Angela Merkel touted German contributions to NATO — and how its defended US interests.

"Germany also does a lot for NATO. We are the second largest donor of troops, we put most of our military abilities into the service of NATO and we are strongly committed in Afghanistan, where we also defend the interests of the United States of America. Because the deployment in Afghanistan has to do with the only example of Article 5," Merkel said.

Merkel also noted that she grew up in Germany during a time when part of Germany "was controlled by the Soviet Union" and pointedly noted that Germany can now "form our own independent policies and can make independent decisions."

First lady Melania Trump is also in Belgium, where President Trump is attending the NATO summit.

Trump and other NATO spouses are at the Queen Elisabeth Music Chapel in the leafy suburb of Waterloo, Belgium, today. It's about a 40-minute drive from Brussels’ city center.

Trump wore a navy blue Calvin Klein dress and Christian Louboutin high heels as she was greeted by her hosts for the event, Amelie Derbaudrenghien, the domestic partner of Belgian Prime Minister Charles Michel, and Ingrid Schulerud, the wife of NATO Secretary General Jens Stoltenberg.

Ahead of the NATO summit, President Trump tweeted that the US spends 4% of its GDP on defense. (NATO members target defense spending at 2% of economic output — you can read more on that in the post just below this one.)

Take a look at the seven-year breakdown of the US and other NATO members: 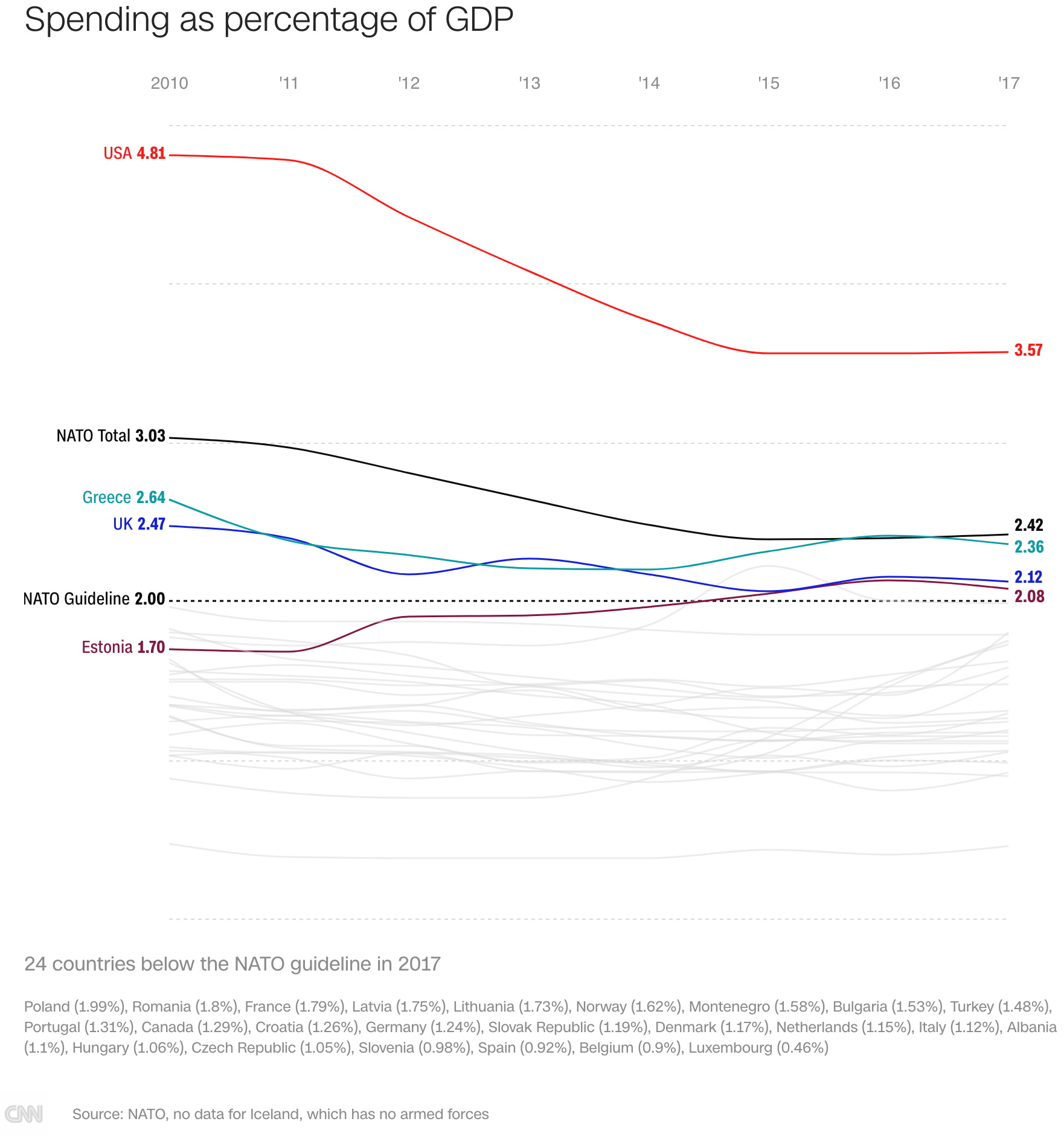 NATO members target defense spending at 2% of economic output. (Note: The target is described only as a “guideline,” and there is no penalty for not meeting it.)

But here's the thing: While NATO has long been pushing for higher spending, a summit pledge in 2014 gave laggard members a goal of meeting the target by 2024.

"The rules say by 2024. Suddenly President Trump wants to change the rules? OK, I guess that's his view, but NATO — the 29 members of NATO — said that by 2024 we will achieve that target. And even the US ambassador to NATO says that 100% of all NATO members are moving in that direction. What more does the President want?"

“I understand that a greater effort is required of all the allies regarding the defense budget, but to be fair to all the allies you have to be aware that in Spain we are committed. In real terms we have increased spending since 2015 and 2016, and in particular we have to look at other elements that are taken into account at NATO,” Sanchez said at the NATO summit.

He added that Spain’s military capabilities “are well above the average” and that its missions lasted “long over” the average.

President Trump is attending the NATO summit in Brussels today. He was just welcomed by NATO Secretary General Jens Stoltenberg.

Trump is expected to meet with both French President Emmanuel Macron and German Chancellor Angela Merkel during this summit.

That second meeting could be especially tense: Trump this morning accused Germany — a close US ally — of being "a captive of Russia" and all-but ordering members of the alliance to increase their defense spending "immediately."

The mood is already tense: Trump came out brawling in his first public comments here ahead of the summit, accusing German — a close US ally — of being "a captive of Russia" and all-but ordering members of the alliance to increase their defense spending "immediately."

Watch Trump's arrival in the clip below: