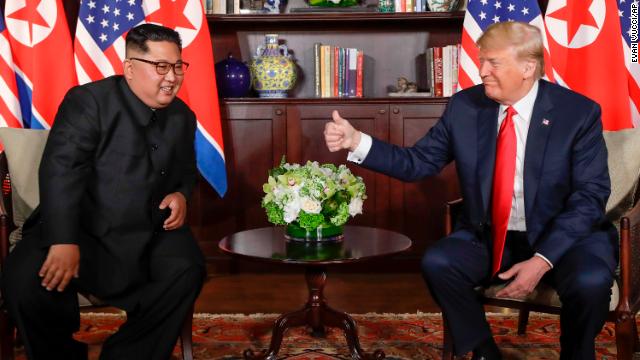 Here's what you need to know about how the summit went down:

President Trump gave an hour-long press conference before he left Singapore — and it started this movie trailer-esque video:

The nearly 10-minute-long video starts with a title card claiming it's a "Destiny Pictures" production, a voiceover and stock footage from around the world.

"Seven billion people inhabit planet Earth. Of those alive today, only a small number will leave a lasting impact. And only the very few will make decisions or take actions that renew their homeland and change the course of history," the video begins.

The trailer eventually cuts to images of Trump and Kim.

The voiceover ends with this:

"Featuring President Donald Trump and Chairman Kim Jong Un in a meeting to remake history. To shine in the sun. One moment, one choice — what if? The future remains to be written."

CNN just caught a glimpse of the North Korean delegation leaving the St. Regis hotel in Singapore, where Kim Jong Un was staying his stay for the summit with President Trump.

President Trump, who stayed at the Shangri-La hotel, left Singapore a few hours ago.

Senate Majority Leader Mitch McConnell just spoke on the floor about Trump's meeting with Kim Jong Un, saying it is a major step toward "historic peace."

"As President Trump explained a few hours ago, today is the beginning of the arduous process. Our eyes are wide open," McConnell said.

"If North Korea does not prove willing to [denuclearize], we and our allies must be prepared to restore the policy of maximum pressure," McConnell said. "Today I congratulate the President on this major step, and share his hope that it will begin a process that leads to an historic peace."

The historic US-North Korean summit is making headlines across the world — except in North Korea.

By the early evening, the country's tightly controlled media had completely ignored the meeting itself, at which North Korean leader Kim Jong Un made a vague pledge of denuclearization.

However, the state-run newspaper did show images of Kim's tour of Singapore, which happened the night before their meeting.

In North Korea, where all local media is state-owned, reports often come out a day after the fact, leaving the population there in the dark Tuesday on one of the country's most significant political events in years.

Some things that were mentioned in North Korean news today:

UN Secretary-General António Guterres called the Trump-Kim summit a "important milestone in the advancement of sustainable peace," according to his spokesman.

"The Secretary-General urges all concerned parties to seize this momentous opportunity and reiterates his readiness to fully support the ongoing process."

The Secretary-General welcomes the holding of the Summit between the leaders of the Democratic People’s Republic of Korea (DPRK) and the United States as an important milestone in the advancement of sustainable peace and the complete and verifiable denuclearization on the Korean Peninsula.As the Secretary-General noted in letters to both leaders before the Summit, the road ahead requires cooperation, compromise and a common cause.  Implementing today’s and previous agreements reached, in accordance with relevant Security Council resolutions, will require patience and support from the global community. The Secretary-General urges all concerned parties to seize this momentous opportunity and reiterates his readiness to fully support the ongoing process.

The Department of Defense "continues to work with the White House, the interagency, and our allies and partners" following the summit, Lt. Col. Dave Eastburn, a Pentagon spokesman, told CNN.

"We will provide additional information as it becomes available," he added.

A separate senior US defense official said the Pentagon will work with the White House and State Department to further determine how to carry out the President’s intent on exercises.

The official says “right now the issues to be determined” are:

Why we're talking about this: Earlier today, President Trump said the US plans to stop the "war games," an apparent reference to joint military exercises with South Korea that North Korea has long rebuked as provocative.

Trump also said he hopes to eventually withdraw US forces from South Korea, but said "That's not part of the equation right now."

The British Government hopes Kim Jong Un “continues to negotiate in good faith towards complete, verifiable and irreversible denuclearization," according to a statement from British Foreign Secretary Boris Johnson.

North Korea’s commitment to work towards denuclearization indicates that leader Kim Jong Un “may have finally heeded the message that only a change of course can bring a secure and prosperous to the people of North Korea,” Johnson’s statement also said.

Johnson described the the summit as “constructive" and added that the UK will continue to support the US's efforts toward denuclearizing of the Korean Peninsula.

President Trump is currently on his way back to the US following the summit in SIngapore.

Moon and Kim held their own summit in April. They signed the Panmunjom Declaration for Peace, Prosperity and Unification on the Korean Peninsula, which committed the two countries to denuclearization and talks to bring a formal end to the Korean War.

Here's the moment Kim and Moon met for the first time: 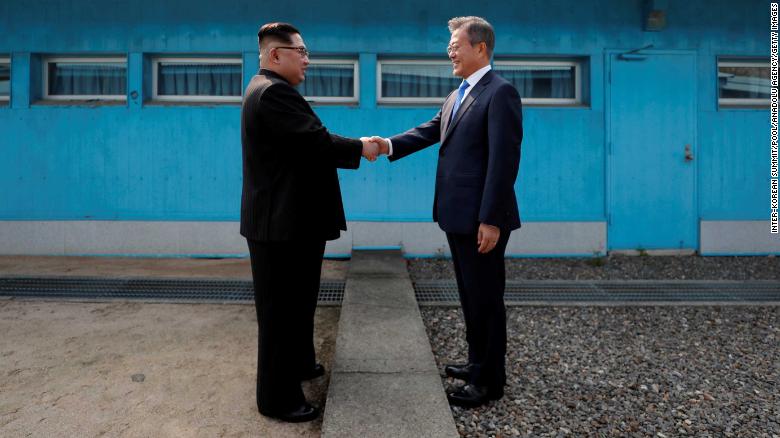