Our live coverage has ended. See how the day unfolded in the posts below.

The three Republican senators who met with former President Trump's defense team Thursday night were there to give them advice for their rebuttal, two people familiar with the meeting told CNN.

Sens. Lindsey Graham of South Carolina, Ted Cruz of Texas and Mike Lee of Utah were seen going into the room Trump's team is working out of during the trial. While inside, they gave them their suggestions for how to proceed during today's presentation, CNN has learned from multiple sources.

Lawyers Bruce Castor and David Schoen were both in the room for the meeting, as were multiple others.

While the episode raises questions about jurors meeting with the defense team mid-trial, it also signals the uneasiness among Trump's allies of how his legal team is prepared to defend his actions today. Trump has complained at length about Castor and urged others to talk to him before he got on the Senate floor today.

The House impeachment managers wrapped up their case for the conviction of Donald Trump on Thursday. They centered their argument on connecting the former President's words in advance of the Jan. 6 riot to the actions taken by his supporters on that day. They also used video, some from as far back as 2015, to show a pattern of what they said was the former President seeming to incite and condone violence.

In case you missed it, here are some of the key takeaways from the trial Thursday: 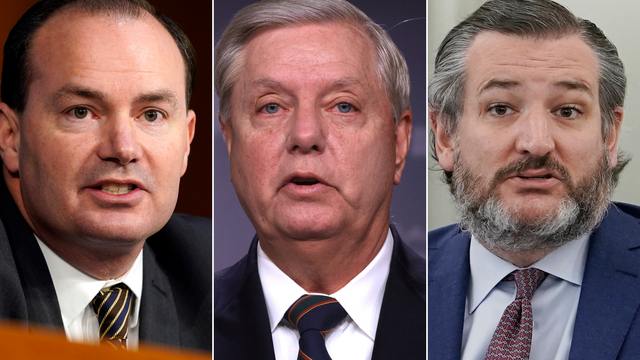 A trio of Republican senators allied with former President Trump met with his defense team Thursday evening, in the middle of an impeachment trial in which they will vote on whether to convict Trump and potentially bar him from holding public office again.

Sens. Lindsey Graham of South Carolina, Ted Cruz of Texas and Mike Lee of Utah were spotted going into a room in the US Capitol that Trump's lawyers were using to prepare for their arguments.

Trump lawyer David Schoen said that the senators were "very friendly guys" who just wanted to make sure they were "familiar with procedure" on the eve of their rebuttal to the House impeachment managers' presentation.

When asked if it's appropriate to meet with senators during the trial, Schoen said, "Oh yeah, I think that's the practice of impeachment."

"There's nothing about this thing that has any semblance of due process whatsoever," he added.

Some senators view themselves as impartial jurors during impeachment trials, while others lend a hand to their party's side.

Cruz said the meeting with the Trump defense team was an opportunity for "sharing our thoughts" about their legal strategy. A wide array of Senate Republicans harshly criticized the defense team on Tuesday, the opening day of the trial, arguing that Trump attorney Bruce Castor had delivered a rambling and unfocused argument in making the case that the proceedings are unconstitutional.

When asked if he's now comfortable with the Trump team's legal strategy, Cruz said, "I think the end result of this impeachment trial is crystal clear to everybody."

"Donald Trump will be acquitted," he added. "It takes 67 votes to convict him and every person in the Senate chamber understands that there are not the votes to convict, nor should there be."

Republican senators have already signaled that they will vote to acquit the former President of the charge of "incitement of insurrection," preventing a subsequent vote on Trump's political future. In a 50-50 Senate, the House impeachment managers – all of whom are Democrats – need to persuade 17 Republican senators to join every member of their party to convict Trump.

In another sign that things are moving quickly and that senators may get their chance to question each side tonight, GOP and Democratic senators have been asked to submit their proposed questions to their respective party leaders, senior aides familiar with the request tell CNN.

The idea among the respective leaders is to avoid duplication, these senior aides said. Some senators are working together on questions.

The expectation is that question period won’t take four hours. But importantly, senators can ask questions on the floor without prior leadership approval and can do so on the fly.

House Democrats still aren’t saying whether they will call witnesses in former President Trump’s second impeachment trial, but senior aides on the team said the managers are prepared to move to the question-and-answer period with senators as soon as tonight.

If that happens, the final vote on Trump’s conviction could happen on Saturday.

But the one thing that could put a halt to the speedy conclusion of Trump’s trial is if the Democrats ask for witnesses – which would prompt a debate and vote on the Senate floor.

While Senate Democrats have been signaling that they don’t think witnesses are necessary for the trial, the House aides repeatedly declined to tell reporters whether they plan to seek witnesses or allow the trial to move into closing arguments after the question-and-answer session.

The aides also declined to say whether they were going to submit any additional evidence for the record.

Ahead of the defense team’s arguments today, the aides said they expected Trump’s lawyers to put forward a “false equivalency” by playing clips of Democratic speeches using fiery language. And the aides argued that Trump’s team would try to play to legal arguments instead of actually addressing the evidence that the managers presented.

CNN briefly spoke with President Biden this morning as he joined the first lady for a walk to view Valentine's Day candy hearts on the North Lawn.

Biden told CNN he’s “anxious” to see how Republicans will vote in the impeachment trial.

“I’m just anxious to see what my Republican friends do, if they stand up,” Biden said, adding that he is not planning to speak with any of them.

Trump adviser Jason Miller said the former President's defense team will present for around four hours today. He clarified that attorney Bruce Castor, whose opening argument was widely criticized, will have a speaking role in the presentation.

Miller called today "redemption day" for Castor and said his arguments will be "tighter and crisper" than they were Tuesday, when Trump was urged by multiple people to fire Castor from his team.

Trump has repeatedly complained about Castor in the days since, but Miller said the legal team reviewed their strategy with Trump last night.

Miller also said he believed they could get to the question-and-answer session today and even floated potentially having closing arguments by tonight. Of course, that decision is up to Senate leaders, not Miller.

CNN's Manu Raju notes that senators’ questions are very likely tonight after the Trump team argues, but that closing arguments are less likely unless there are very few senator questions.

His lawyers will take the Senate floor today, but they are not currently expected to use all of their allotted time. Each side gets 16 hours for presentations.

Attorneys David Schoen, Bruce Castor, Michael van der Veen and William Brennan are all expected to speak during Friday's arguments, according to a person familiar with the latest plan. Using videos of Democratic lawmakers, they plan to argue that Democrats glorified violence by recreating the Jan. 6 riot, will claim the trial is unconstitutional and stress Trump's First Amendment rights.

Because the legal team is so disorganized, Trump's allies are apprehensive about how the defense will go. Trump erupted Tuesday as Castor made a meandering opening argument during which he praised the prosecutors.

Several of Trump's allies lobbied him to get rid of Castor that day, which Trump briefly considered, according to two people. Trump was upset as he watched multiple people, including his usual allies on Fox News, trash Castor's performance. But Castor has remained on the team and is expected to present, at least in part, on Friday. He has told people he wasn't planning on speaking Tuesday, which led to the muddled speech. Castor also admitted on the Senate floor that he swapped speaking roles with Schoen because Democrats presented such a strong opening argument.

Though Castor was supposed to lead the defense, as CNN reported, that's now expected to be Schoen, who has said he will not participate in the proceedings during the Sabbath. Trump's team believes they will likely wrap up their arguments by then.