Regardless of whether or not President Trump gets convicted, the impeachment trial will have an impact and set a precedent, GOP Rep. Adam Kinzinger said Tuesday.

“History has a way of judging things kind of perfectly. I don't think people are going to look back in history and say impeaching him was the wrong thing. Everything is a precedent,” Kinzinger told CNN's Jim Sciutto. “I fear what happens is there will be another president some day that sees that as a model and decides he or she is going to emulate that, and that's frightening.”

“Only Donald Trump can be proud of being impeached twice and acquitted," he continued. "Every other president, every other person in the presidency would be ashamed of that. So he'll, you know, stoke the base up. But I don't think it's a lasting proposition … You look at Sarah Palin who was very important for a couple of years, and we don't talk about her anymore. I think he's going to go that way. If he doesn't, the Republican Party is in real trouble.”

Kinzinger also said that many Republican lawmakers have been quieter because of the backlash that Rep. Liz Cheney received for publicly criticizing Trump.

“I don't blame anybody for their vote. I just know this. At the end of my life, I have to look in the mirror and say what did I do with my time in Congress, which is a real huge gift. And I want to know that I did everything to defend this Constitution, that I feel totally at peace with that,” he added.

Here's where we are: A president who survived impeachment for trying to stack the deck against his most-feared election opponent is now facing impeachment again for inciting his supporters to attack Capitol Hill to challenge that same opponent's victory.

This second impeachment trial is arguably more important, because it's about Trump's attempt to stop American democracy from functioning. But the first one set the precedent of Trump being held to account for trying to pull the levers of his authority to preserve his own power.

Here's a rundown of what happened leading up to the first impeachment in late 2019 and the last Senate trial in early 2020.

Democrats warned he would take the acquittal as license to do it again.

Everything is simpler this time

The answer is that this process is the only way under the Constitution to block the man who rejected the results of this election from running in the next one.

CNN's Lauren Fox is breaking down what to watch for today.

As the second Senate impeachment trial of former President Trump begins in several hours, Senate Majority Leader Chuck Schumer said the Senate has a “solemn responsibility” to try and hold Trump “accountable for the most serious charges, ever, ever levied against a president.”

Schumer said he believes the House impeachment managers will present a “very strong case” with “powerful” evidence, some of it “new.” He also urged his Republican colleagues in particular to pay careful and real attention to the evidence.

The New York Democrat reiterated he believes the country cannot move on without “accountability.”

He made the remarks at a press conference alongside Senate Committee chairs on how their work will continue during the impeachment trial this week.

According to the new organizing resolution obtained by CNN, the Senate trial will be in session Sunday unless the proceedings are over by then.

The trial was initially scheduled for Saturday but subsequently changed after Trump's lawyer, David Schoen, submitted a request not to hold the impeachment trial on the Jewish Sabbath. Late last night, Schoen withdrew his request.

Ahead of the start of former President Trump's second impeachment trial, Senate Majority Leader Chuck Schumer urged senators, who will serve as the jury, to pay close attention to the case prosecutors will make.

He added: "Every senator, Democrat and Republican, has to approach this trial with the gravity it deserves."

Former President Trump's lawyer David Schoen is withdrawing his request to not hold the impeachment trial on the Jewish Sabbath. Schoen's initial request had already been granted and had altered the likely schedule for the proceedings.

In a letter written to Sens. Pat Leahy, Chuck Schumer and Mitch McConnell, Schoen wrote, "Based on adjustments that have been made on the President's defense team, I am writing today to withdraw my request so that the proceedings can go forward as originally contemplated before I made my request. I will not participate during the Sabbath; but the role I would have played will be fully covered to the satisfaction of the defense team."

He also wrote, "I am advised that your response to my letter was to graciously accommodate my Sabbath observance and to set a schedule for the upcoming impeachment trial that meant suspending the trial for the Jewish Sabbath. This meant causing you to lose Friday evening and all day Saturday that you previously intended to have for the trial. I very much appreciated your decision; but I remained concerned about the delay in the proceedings."

This will likely lead to a change in the trial schedule laid out in the resolution that was slated to be passed Tuesday. Text for the resolution, which set the parameters for the trial's length and schedule, included language to pause the trial on Friday evening and resume on Sunday afternoon.

Schumer's office had said over the weekend the Senate would accommodate the request from Schoen.

It was unclear as of Monday evening what Schoen's withdrawal would do to the schedule of the impeachment trial, which is slated to begin this afternoon.

House Speaker Nancy Pelosi has named nine Democrats to serve as impeachment managers, a role that calls on them to make the case against Trump during the trial. The House has charged him with inciting an insurrection at the Capitol that left five people dead.

The group of Democrats includes a number of top Pelosi allies. Congressman Jamie Raskin of Maryland, an expert in constitutional law, is serving as the lead manager.

The nine House impeachment managers are:

There are no restrictions on the number of impeachment managers the speaker can name to serve in the role. During the first impeachment trial against Trump, seven House Democrats served as managers.

The House impeachment managers will play a key role in how it unfolds as they each take a turn in the national spotlight. They will have a chance to argue their case before the full Senate with the senators acting like jurors, and after that, the former President’s legal team will have an opportunity to present a defense.

Read more about each of them below: 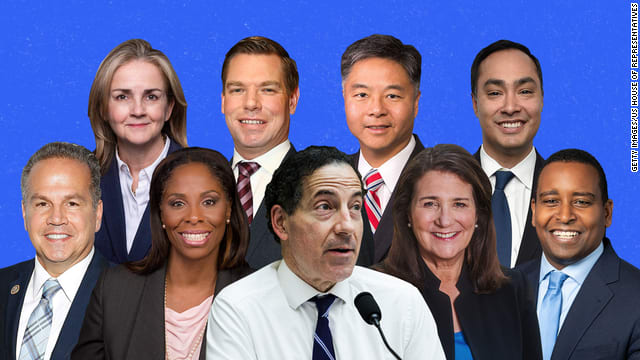 The unprecedented second impeachment trial of former President Trump will take place under extraordinary security inside the US Capitol – a physical reminder that federal officials still believe threats to lawmakers and federal buildings are possible more than a month after the Jan. 6 insurrection.

Members of the National Guard still patrol the exterior of the Capitol complex – in some cases along 8-foot, non-scalable fences topped by razor wire.

In addition, enhanced security measures around the US Capitol will remain in place due to the ongoing potential for violence by domestic extremists, in part due to the heightened political tension surrounding the trial itself, sources familiar with the plans told CNN. Access to the Senate will also be tightly regulated, as it was during Trump's first impeachment trial.

Federal law enforcement officials say they are not currently tracking any "specific and credible" threats to the Capitol surrounding the Senate impeachment trial, which is scheduled to begin on Tuesday, but relevant agencies, including the FBI and the Department of Homeland Security, remain on high alert. They're using all the tools at their disposal to avoid the security and intelligence failures that occurred leading up to the Jan. 6 Capitol attack.

The FBI continues to conduct surveillance on a number of people in the US, in cases where there is enough probable cause to do so – monitoring for any signs that they are planning something specific around the impeachment trial and in the weeks that follow, according to a law enforcement official.

Law enforcement officials have also reached out to some of the suspects in an effort to discourage them from facilitating unrest or violence, the official said.

As part of that effort, officials are closely tracking threats against individual members of Congress, which have continued to mount in recent weeks. Ensuring the safety of lawmakers in Washington and as they travel back to their home states has become a particular area of focus, sources have told CNN.