While the House impeachment managers make their presentation, most senators were paying attention, either taking notes or listening politely. Some didn't seem to be too interested in the proceedings.

Sen. Rand Paul, who is not wearing a mask, was doodling squiggly lines on a white pad of paper. Next to him, his friend, Utah Sen. Mike Lee, was taking extensive notes, writing furiously as Democrats were making their arguments.

Everyone is wearing a mask, other than Paul. Sen. Cynthia Lummis pulled her mask down for an extended period of time as well.

Lee has a book titled "Senate procedure" on his desk, while Sen. Rick Scott has a book entitled "Vicksburg." Sen. Mike Braun was sitting in the back of the chamber reading The Hill newspaper, with a copy of Roll Call also at his desk. Sen. Josh Hawley was reading some documents.

Many senators are taking notes, including Sens. Rob Portman, Susan Collins and Tammy Baldwin. And virtually all senators are in their seats. Here or there, a senator may slip into their respective cloak rooms and then return to their desks after a few minutes.

As former President Trump’s second impeachment trial got underway, reporters in the Senate chamber gave us a glimpse of what it's like there, and described the scene when House impeachment managers played footage of the Capitol riot.

Sen. Pat Leahy, who is presiding over the trial, could be seen chit chatting with Trump’s lawyer David Schoen during the resolution vote.

Senators on both sides were seen turning away from time to time as video evidence of the Capitol attack played on monitors. The sounds of the montage seemed to echo a lot more in the chamber, filling it with the screams and yells of the mob – the same room rioters barged into just a month before. When the video concluded, there was complete silence in the chamber. When Rep. Raskin began to speak again, it felt like the room took a breath, binders were opened, papers were rustled, and people shifted in their seats, the pooler said.

Some senators appear to have come prepared after having experienced the last impeachment trial. Minority Whip Sen. John Thune brought an airline neck pillow for support. Several female senators were seen with additional scarves as it can get cold in the chamber, including: Sens. Shelley Moore Capito, Marsha Blackburn and Mazie Hirono. Sen. Richard Burr was seen dropping a snack bar that was in his desk.

The senator’s desks have pencils, a water bottle, binders and what appears to be copies of impeachment documents. On the tables for the managers and Trump lawyers there are bottles of hand sanitizer and Clorox wipes.

The pool reporter noted that most senators looked like they were paying close attention, many taking notes. Sen. Mike Lee, a Republican from Utah, was writing furiously in some printed document. Lee took furious notes also throughout the last impeachment trial.

Almost everyone was wearing a mask except for Sen. Rand Paul, as CNN previously noted.

Remember: As CNN has previously reported, mask-wearing is not mandatory in the Senate. But almost all senators and staffers have complied with CDC guidance to wear masks during the pandemic on the Senate floor, with the exception of Republican Sen. Rand Paul. Paul has long argued that he’s immune after having Covid-19 early last year. It’s still unclear if those who have had coronavirus remain immune to the virus. Other senators, however, who have had coronavirus and/or been vaccinated for the disease still wear masks.

The pooler noted that there are two monitors in the visitor’s gallery that allow press to view the same footage that are on the screens. Leahy has his own monitor as the presiding officer.

Lead House impeachment manager Rep. Jamie Raskin laid out the Democrats' case to convict former President Trump as the Senate holds a debate on the constitutionality of the trial.

Rep. Raskin, of Maryland’s 8th district, was selected by House Speaker Nancy Pelosi to lead the impeachment managers. Raskin has an extensive background in constitutional law.

He was a professor of constitutional law at American University for more than 25 years before taking office in the House in 2017. He also served as assistant attorney general of Massachusetts from 1987-89.

Raskin began drafting the articles of impeachment against Trump hours after the insurrection at the Capitol and also wrote a resolution to activate the 25th Amendment.

“We have a solemn duty to protect our democracy and Constitution,” Raskin tweeted on Jan. 12 about his role in the impeachment trial.

Raskin sponsored the articles of impeachment against Trump with fellow colleagues Rep. Ted Lieu and Rep. David Cicilline, who are also impeachment managers.

He and the team of managers delivered the articles of impeachment to the Senate on Jan. 25. For Raskin, the impeachment is personal to him on many levels. On Jan. 6, Raskin’s daughter and son-in-law were with him at the Capitol. The insurrection was compounded by the death of his 25-year-old son, Tommy, who’s funeral happened just a day before the attack.

In an interview with CNN’s Jake Tapper, Raskin said, “I’m not going to lose my son at the end of 2020 and lose my country and my republic in 2021.”

Here's one example, which Democratic impeachment manager Joe Neguse just mentioned in his remarks on the Senate floor:

During the Gilded Age, so-dubbed by Mark Twain, the Secretary of War to Ulysses Grant was caught taking kickbacks and funding a lavish lifestyle — accounts all seem to note how William Belknap's first and second wife were extravagantly dressed.

Caught, Belknap begged his friend and boss, Grant, to accept his resignation. He was at turns on his knees begging Grant and in tears, grasping Grant's hand, according to lore.

This image from Frank Leslie's Illustrated Newspaper is in the Senate archive. It appears to show the weeping Belknap before Grant allowed him to resign. 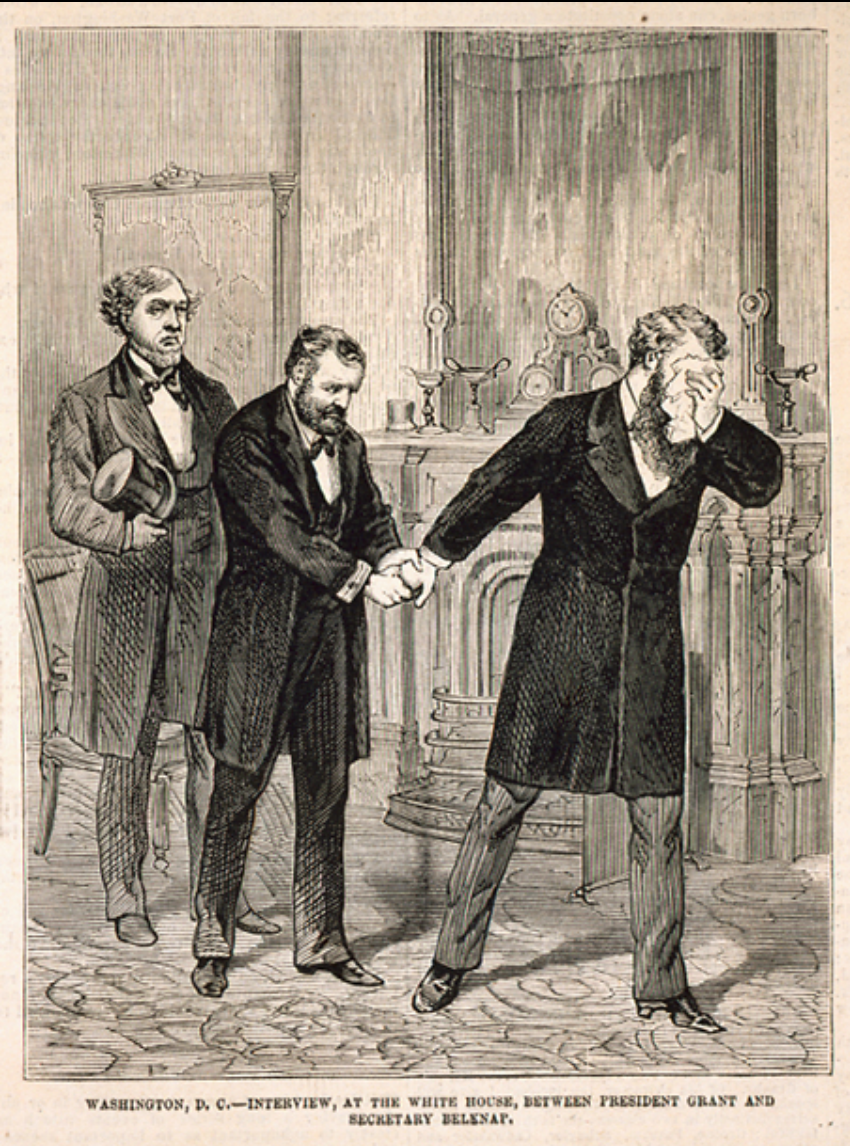 But after that, he was impeached and tried in the Senate, which is bad news for Trump.

Although he was ultimately acquitted by the Senate, which might be good news for the former President – though Belknap's corruption is a much different thing than Trump's insurrection.

“If that's not an impeachable offense, then there is no such thing,” Raskin said.

Raskin said that Trump wants to render the Senate "powerless" during a presidential transition period, while Raskin believes it is one of the most important and fragile times for the country.

"The transition of power is always the most dangerous moment for democracies. Every historian will tell you that. We just saw it in the most astonishing way. We lived through it. And you know what, the framers of our Constitution knew it. That's why they created a Constitution with an oath written into it that binds the president from his very first day in office until his very last day in office and every day in between," Raskin said.

Raskin, an expert on constitutional law, went on to lay out why the Democrats believe a trial against a president who has left office is constitutional.

"Under that Constitution, and under that oath, the president of the United States is forbidden to commit high crimes and misdemeanors at any point he is in office. Indeed, that's one specific reason impeachment, conviction and disqualification powers exist, to protect us against presidents who try to overrun the power of the people in their elections and replace the rule of law with the rule of mobs," Raskin added. "These powers must apply even if the president commits his offenses in his final weeks in office. In fact, that's precisely when we need them the most, because that's when elections get attacked."

The House managers are presenting video evidence of the Capitol riot as part of their case against former President Trump.

Supporters of Trump breached the US Capitol on Jan. 6, engulfing the building in chaos after Trump urged his supporters to fight against the ceremonial counting of the electoral votes to certify President Joe Biden's win. Read a transcript of Trump's speech here.

Five people died as a result of the riot, including a woman who was fatally shot by police and three people who died of apparent medical emergencies.

Here's how key events unfolded throughout the day at the Capitol:

Senate Majority Leader Mitch McConnell said on the floor that the "United States Senate will not be intimidated. We will not be kept out of this chamber by thugs, mobs or threats."

It took until deep in the early hours of Thursday morning, but Congress eventually counted and certified Biden's election win.

As part of his opening remarks in the Senate impeachment trial, lead impeachment manager Rep. Jamie Raskin showed footage from the day pro-Trump rioters stormed the US Capitol building.

Videos from the deadly attack were interweaved with footage of President Trump addressing a rally of supporters just moments before the surge.

"We fight like hell," President Trump is heard saying at the rally. "We're going to the Capitol," he said at another point.

Videos from the Capitol showed supporters clashing with police and scaling the building's walls before breaching the doors of the Capitol. Footage from inside the Capitol showed members of Congress evacuating before rioters stormed the Senate floor and members' offices. One video showed the moment was rioter was shot and killed.

In his opening remarks, lead House impeachment manager Jamie Raskin said his team's case against former President Trump would be "based on cold, hard facts."

"It's all about the facts," Raskin said.

Raskin, a Democratic congressman from Maryland, said Trump has sent his lawyers to the trial to "try to stop the Senate from hearing the facts of this case."

"They want to call the trial over before any evidence is even introduced. Their argument is that if you commit an impeachable offense in your last few weeks in office, you do it with constitutional impunity. You get away with it."

"If we buy this radical argument that President Trump’s lawyers advance, we risk allowing Jan. 6 to become our future," he added.

Trump's defense team has said they plan to argue that the former President's false claims that the presidential election was rigged and his speech to the crowd ahead of the Jan. 6 Capitol riot, are protected by the First Amendment.

As both sides make their case, here's what the First Amendment actually says:

"Congress shall make no law respecting an establishment of religion, or prohibiting the free exercise thereof; or abridging the freedom of speech, or of the press; or the right of the people peaceably to assemble, and to petition the government for a redress of grievances."

That's the entirety of the US Constitution's First Amendment.

There's a lot going on in those few sentences, and it's important to know when and how it applies to common situations – and, equally as important, when it doesn't.

Our constitutional experts look at some common First Amendment arguments and when the Amendment actually applies. You can read them here.