Our live coverage has ended. Read below for the latest on Trump's acquittal.

Sen. Mitt Romney said this afternoon that he will vote to remove President Trump from office on the House's charge of abuse of power, making the Utah Republican the first senator in US history to vote to convict a president from the same party in an impeachment trial.

According to CNN reporting from 1999, not one Democratic senator voted to convict President Bill Clinton, a fellow Democrat, on the charges of perjury and obstruction of justice.

In the 1868 impeachment of trial of President Andrew Johnson, a Democrat, none of the senators from his party voted to convict him, according to the US Senate.

While this was expected inside the White House, one thing officials have been discussing behind the scenes for the last several days is the awkward position this vote will put his niece, and Republican National Committee chair, Ronna McDaniel in.

She is very close to the President and his campaign manager, Brad Parscale, and the two often call Trump together to go over fundraising and poll numbers. Trump has complained to her regularly since Romney became a rare voice in the party who at times openly criticizes him.

Trump has been particularly annoyed by Romney's comments about his call with the Ukrainian president over the last several months.

"Ronna Romney McDaniel better declare her uncle persona non grata or there will be a major push by Trumpers in the RNC to censure the junior senator from Utah and perhaps, just perhaps, oust her," one RNC insider told CNN today.

Democratic Sen. Chris Murphy told reporters that he was emotional in the chamber as he listened to Republican Sen. Mitt Romney say he will vote to convict President Trump.

Murphy’s voice was shaking as he told reporters, “I was choked up listening to him speak.”

He said it was the “toughest thing in the world” to stand up to his party and donors.

"Thank you, Mitt. You have restored my faith in the Senate and the idea that putting country over party is still possible," the Democratic senator said.

Just moments ago: Romney, a Republican from Utah, said what Trump did “was a flagrant assault on our electoral rights, our national security, and our fundamental values."

"Corrupting an election to keep oneself in office is perhaps the most abusive and destructive violation of one's oath of office that I can imagine," he added.

Watch Romney get emotional during his announcement:

Sen. Mitt Romney, a Republican from Utah, said he will vote to convict in the impeachment of President Trump.

Romney said Trump is “guilty of an appalling abuse of public trust.”

He said what Trump did “was a flagrant assault on our electoral rights, our national security, and our fundamental values."

Romney added: "Corrupting an election to keep oneself in office is perhaps the most abusive and destructive violation of one's oath of office that I can imagine.”

He said he believed that his vote to convict Trump would be in the "minority" and Trump would not be found guilty.

"My vote will likely be in the minority in the Senate, but irrespective of these things, with my vote, I will tell my children and their children that I did my duty to the best of my ability believing that my country expected it of me," Romney said.

Romney will convict Trump on abuse of power and acquit him on obstruction of Congress, his spokesperson said.

Protesters were arrested in the Capitol rotunda this afternoon while chanting, “Trump is guilty ... Honor your oaths.”

A law enforcement official told CNN that 10 people were arrested.

Later this afternoon: Senators will vote on the articles of impeachment against President Trump at 4 p.m. ET, roughly five months after a whistleblower's complaint over the President's comments to the President of Ukraine over the summer kicked off the inquiry.

It’s a historic day in Washington as President Trump’s impeachment trial comes to a close.

Meanwhile, The Brief’s Bianca Nobilo has been keeping track of the day’s headlines outside Capitol Hill. 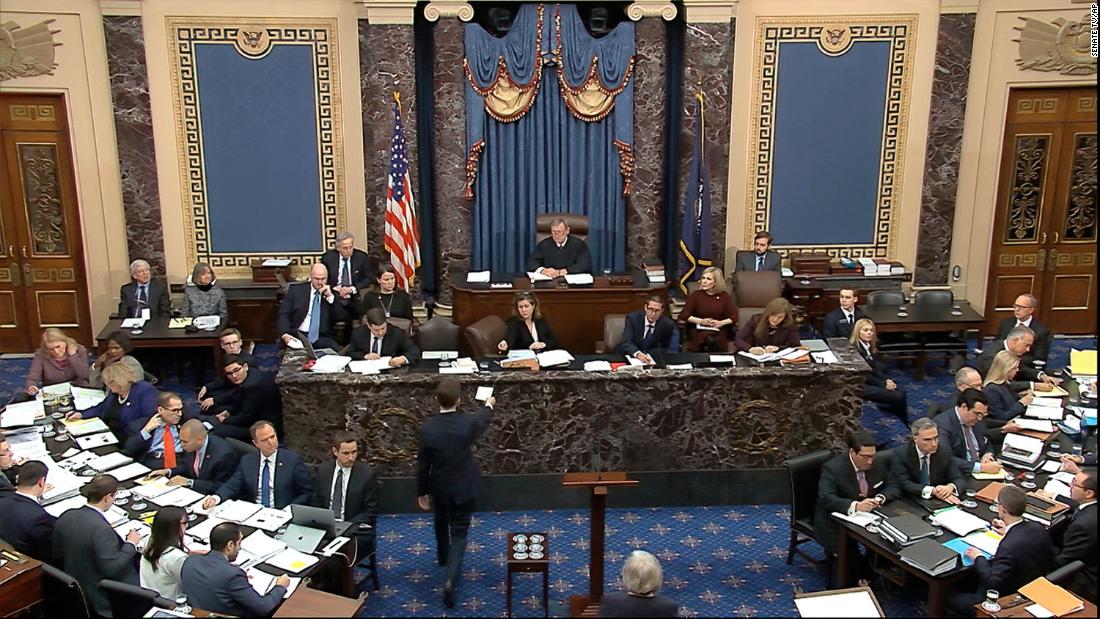 The final impeachment vote later today will bring an end to the nearly five months of the impeachment inquiry and trial that sprang forth from a whistleblower's complaint over Trump's comments to the President of Ukraine over the summer.

However, Democrats have vowed to continue investigating Trump and his administration, and that includes some unanswered questions that came up during the investigation.

A key development to watch is whether the Democratically-controlled House committees will subpoena former national security adviser John Bolton. Bolton, who never testified during the House inquiry, said last month that he'd be willing to testify in the Senate trial if subpoenaed. The Senate voted against seeking witness testimony, but the House has said it'll continue its investigations and kept the door open to calling Bolton to testify.

Regardless of today's vote, Trump will remained impeached forever. Similarly, former President Bill Clinton was impeached by the House but acquitted in his Senate trial. Trump has joined Clinton and President Andrew Johnson as the only three Presidents in US history who have been impeached.

President Trump's impeachment team will be on Capitol Hill for the vote this afternoon, two people tell CNN.

The Senate is expected to hold the final vote at 4 p.m. ET.

Sen. Michael Bennet, a Democrat from Colorado, said the senators “have failed in our duty to the American people.”

In a fiery speech, the presidential candidate criticized the way the trial was run.

“We are the only body on planet earth charged with the responsibility of dealing with the guilt or innocence of this President and we can’t even bring ourselves to have witnesses of evidence," Bennet said. “Even when there are literally witnesses with direct knowledge of what the President did practically banging on the doors of this Senate saying let me testify.”