Our live coverage has ended. Go here to read the latest on the impeachment trial.

Moments ago on the Senate floor, GOP Sen. Lisa Murkowski announced that she can’t vote to convict.

Murkowski was critical of the House, Senate and the President in her remarks, saying at one point, "The President's behavior was shameful and wrong."

"The House failed in its responsibilities and the Senate should be ashamed by the rank partisanship that has been on display here ... It is clear to me that few in this chamber approached this with a genuinely open mind," she said. 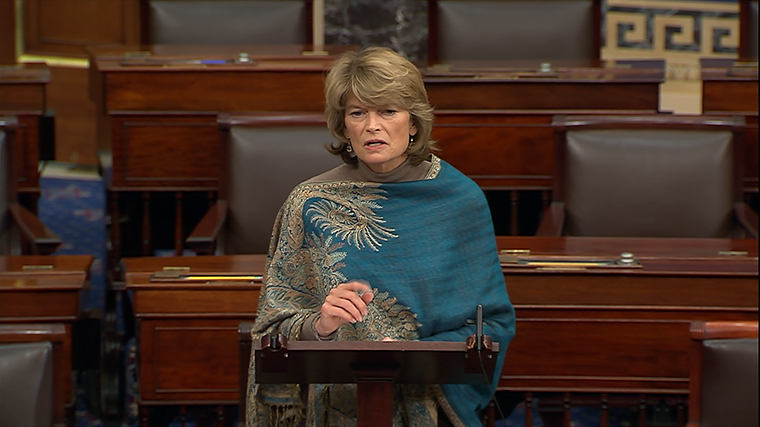 US Sen. Lisa Murkowski — a key GOP senator who voted against having witnesses at the impeachment trial — is speaking on the Senate floor now regarding the current court of impeachment and the upcoming vote on the articles of impeachment.

Democratic Sen. Joe Manchin, speaking from the Senate floor today, explained why he thinks the Senate should censure President Trump.

He said while there won't be 67 votes to remove Trump, he believes a “bipartisan majority of this body would vote to censure President Trump for his actions in this manner.”

“Censure would allow this body to unite across party lines and as an equal branch of government to formally denounce the President's actions and hold him accountable,” Manchin said.

He went on to say that Trump’s behavior “cannot go unchecked by the Senate.”

Sen. Joe Manchin, a Democrat from West Virginia, spoke from the Senate floor this afternoon about his vote in the impeachment trial of President Trump.

"I remain undecided on how I will vote," Manchin said.

Asked by CNN if Trump’s conduct was appropriate, Thune said, “I don't think that's the question at hand. The question is whether or not what he did is impeachable, or whether he should be removed from office and a Senate conviction and I think that that outcome .. is without a doubt that the President will be acquitted.”

Asked again if he agrees with Republican Sen. Lamar Alexander that the President acted inappropriately, Thune said, “I think that, you know, whether or not you agree or disagree or disapprove of his behavior his conduct with respect to Ukraine, the question that the Senate has to answer is whether or not warrants removal from office.”

Daines would only remark on House manager Adam Schiff saying, “His comments, I sense somebody who is very frustrated is my takeaway.”

Senate Democratic Leader Chuck Schumer spoke to reporters at the conclusion of the closing statements. He argued that the defense team has not actually rebutted the House managers' case, though he did not guarantee that every Democrat will be united in voting to convict President Trump.

“Look, I think each Democrat is going to make up his or her own mind. This is an issue of conscience,” he said.

Schumer argued that many Republicans agree with the managers’ case, even if they won’t say so publicly.

“I think in their hearts a lot of Republicans agree with a whole lot of what Adam Schiff said but this President is a vindictive man, he’s a nasty man," Schumer said.

He went on to say “it takes strength and courage ... to go against a president who you know will be vicious and unrelenting against you.”

House managers and the President's defense have wrapped up their closing arguments. The trial has adjourned.

"You can't trust this President to do the right thing, not for one minute, not for one election, not for the sake of our country. You just can't. He will not change. And you know it," Schiff said.

Schiff acknowledged during his argument that going into the trial the prosecution team knew that it would be tough to get a conviction.

"Now, we have known since the day we brought these charges that the bar to conviction requiring fully two-thirds of the Senate may be prohibitively high," he said.

Schiff added: "And yet the alternative is a runaway presidency and a nation whose elections are open to the highest bidder."

He continued his remarks by telling the senators, "I hope and pray that we never have a president like Donald Trump in the Democratic Party, one that would betray the national interest and security to help with his reelection."

He said that they did have a president like Trump that he hopes his party "would impeach him and Democrats would lead the way."

Schiff continued: "History will not be kind to Donald Trump."

"If you find that the House has proved its case and still vote to acquit, your name will be tied to his with a cord of steel and for all of history," Schiff said. "But if you find the courage to stand up to him ... your place will be among the Davids who took on Goliath."

Rep. Hakeem Jeffries, one of the seven House impeachment managers, urged senators to "do the right thing."

Jeffries, a Democrat from New York, told senators that they have proven their case against President Trump "with a mountain of evidence."

"President Trump tried to cheat. He got caught. And then he worked hard to cover it up," Jeffries said. "President Trump corruptly abused his power. President Trump obstructed a congressionally and constitutionally required impeachment inquiry with blanket defiance. President Trump solicited foreign interference in an American election and shredded the very fabric of our democracy."

He went on to make the case against acquitting Trump. Here's what Jeffries said: