The Department of Justice revealed in a court filing late Friday that it has two dozen emails related to the President Trump's involvement in the withholding of millions in security assistance to Ukraine — a disclosure that came just hours after the Senate voted against subpoenaing additional documents and witnesses in Trump's impeachment trial, paving the way for his acquittal.

The filing, released near midnight Friday, marks the first official acknowledgment from the Trump administration that emails about the President's thinking related to the aid exist, and that he was directly involved in asking about and deciding on the aid as early as June.

The administration is still blocking those emails from the public and has successfully kept them from Congress.

A lawyer with the Office of Management and Budget wrote to the court that 24 emails between June and September 2019 — including an internal discussion among DOD officials called "POTUS follow-up" on June 24 — should stay confidential because the emails describe "communications by either the President, the Vice President, or the President's immediate advisors regarding Presidential decision-making about the scope, duration, and purpose of the hold on military assistance to Ukraine."

Some context: Trump's decision to withhold nearly $400 million in US military aid to Ukraine as he pressed the country to investigate Hunter Biden and Joe Biden, his potential 2020 general election rival, are at the center of the President's impeachment trial.

Trump and his allies have repeatedly made unfounded and false claims to allege that the Bidens acted corruptly in Ukraine.

House Speaker Nancy Pelosi took to Twitter this morning to criticize the Senate vote last night to forgo hearing from witnesses in the impeachment trial.

"It is a sad day for America to see Senator McConnell humiliate the Chief Justice of the United States into presiding over a vote which rejected our nation’s judicial norms, precedents and institutions which uphold the Constitution and the rule of law," Pelosi tweeted.

This week Roberts was seen reading the senators' questions which were then answered by House managers and White House counsel. The black-robed Roberts said nothing beyond reading the questions, never revealing his thoughts or tipping his hand in either direction.

Last night: Roberts made crystal clear that he had no intention of intervening in the Senate impeachment trial by casting a tie-breaking vote.

Speculation had mounted during the trial whether Roberts would act, as Democrats hoped the chief could help them force the Republican majority to allow witnesses to be called.

But when asked directly about whether he would get involved, Roberts said he would not.

The Senate voted down a motion to compel witnesses and documents at the impeachment trial. The final vote was 49-51 to defeat the motion.

Sen. Mitch McConnell has released the resolution that lays out the final steps of the impeachment trial.

The resolution spells out the following timeline: closing statements on Monday and a 4 p.m. ET vote on the articles on impeachment on Wednesday.

Read the resolution below: 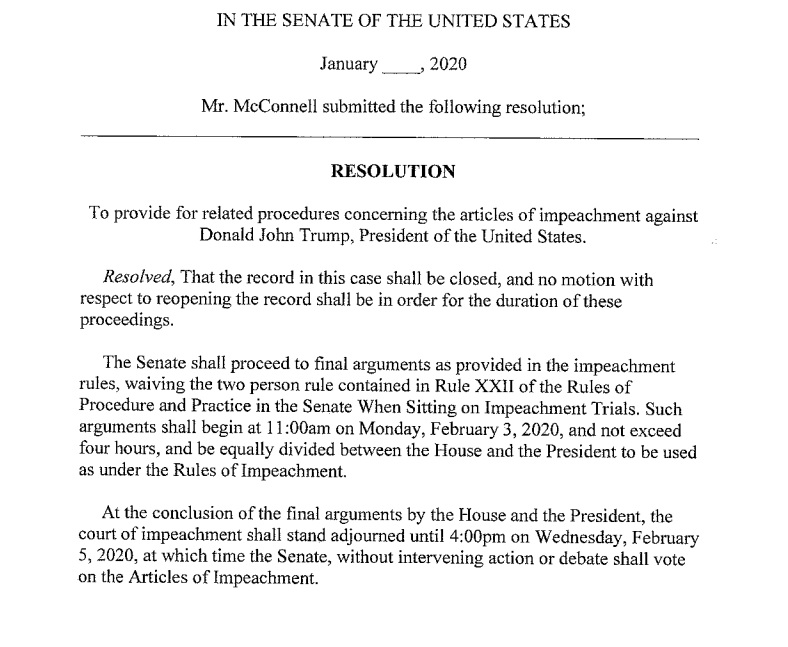 White House officials have resigned themselves to the idea that President Trump will not give his State of the Union address on Tuesday as an acquitted president.

Trump aides had once viewed the annual State of the Union address as an opportunity to walk into House Speaker Nancy Pelosi's turf following the vindication of a Senate acquittal. And tonight — as Republicans and Democrats went back and forth over the next steps — the White House made clear they still wanted the final vote to come before Tuesday.

But as the discussions wore on, the White House legal team became reconciled to the idea that Trump's acquittal vote won't happen until Wednesday. Their message for Republicans was to get it done as soon as they can.

What this means for the speech: A senior Trump administration official acknowledged that Trump’s State of the Union speech could come in the midst of his impeachment trial but insisted the speech will be "forward-looking" and "optimistic" comparing the situation to last year when the government had just emerged from a long government shutdown.

And as the impeachment trial likely progresses into next week, the official said the speech isn’t being written "in a vacuum” and “it wouldn’t be out of the ordinary for the speech to evolve before it's delivered.”

A source who talked with President Trump at Mar-a-Lago Friday night said the President was subdued and distracted, which surprised this source.

Before his arrival, several members, according to this source, had been anticipating a celebratory President given the news that the Senate had blocked an attempt to subpoena witnesses and documents, paving the way for Trump’s acquittal.

Instead, the President was unusually quiet— and didn’t spend a lot of time mingling or chatting with guests. The source, who briefly interacted with the President as he engaged with a few groups, said he never mentioned impeachment or the day’s events.

Late today: Tonight’s events might lift President Trump’s spirits as the “Trumpettes, ” a group of supporters, host their third annual “rally” at his Florida resort.

The event which they’ve called: “Red, White and Blue Celebrating Trump Kick-Off to 2020 Victory” will feature a billboard size sign with a cartoon Trump in a “number 45” football jersey.