Schumer told reporters as he was on his way out tonight “I can’t wait to see my grandson.”

Asked by a reporter what he would say to his Republican colleagues, he said, “I say they really let down the Senate and the country. They know that Donald Trump is a vicious and vindictive president, but sometimes you’ve got to do the right thing.”

Asked how he’ll bridge the divide going forward, he said, “well, let’s hope it gets better. It can’t get much worse.”

When asked by reporters how she was planning to vote on whether to find the President guilty or not, Senator Lisa Murkowski said she’d had enough drama for the day.

“Will I share it with you tonight? I’ve had so much drama today, I’m just gonna chill,” she said.

Murkowksi said she was “disappointed” in “all sides” and said a fair trial would have been one that “remedied the defects of the House.”

Sen. Doug Jones, a Democrat from Alabama, says he will announce his decision on whether to convict next week.

“I want to make sure I get it right,” Jones said.

What are other swing voters saying: Sen. Kyrsten Sinema, another swing Democrat, refused to answer any questions from a group of reporters, walking in silence for nearly 30 seconds as an aide said she wouldn’t respond.

Democratic Sen. Joe Manchin said he won't know how he’ll vote until he walks into the Senate chamber Wednesday.

Before doing do, he received unanimous consent for the following provisions for next week when the trial resumes:

As he left the Senate floor, McConnell was seen giving a thumbs-up. 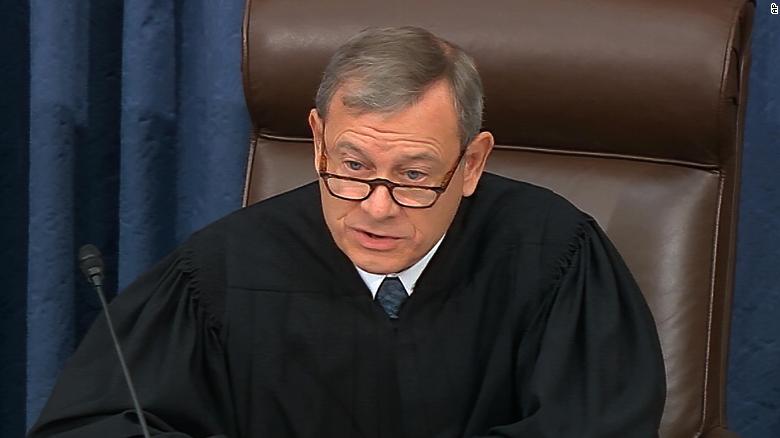 Chief Justice John Roberts made crystal clear tonight that he has no intention of intervening in the Senate impeachment trial of President Trump by casting a tie-breaking vote.

Speculation had mounted during the trial whether Roberts would act, as Democrats hoped the chief could help them force the Republican majority to allow witnesses to be called.

But when asked directly about whether he would get involved, Roberts said he would not.

The Senate just voted 53-47 to approve Senate Majority Leader Mitch McConnell's resolution which spells out how the rest of the impeachment trial will work.

The resolution calls for closing statements on Monday, and a 4 p.m. ET vote on the articles on impeachment on Wednesday.

There will not be a session tomorrow.

A motion to table — or effectively kill — the Democrats' fourth amendment just passed.

All four amendments introduced by the Democrats tonight were voted down.

Republican senators said tonight that Senate Majority Leader Mitch McConnell had no choice but to cut the deal for the Wednesday acquittal vote.

That's because, the senators said, Democrats could have used their power under the rules to drag it out past the State of the Union. And Democrats had no desire to let Trump be cleared by the time of the Tuesday SOTU as the White House wanted, according to senators from both parties.

So they decided to cut the deal, spare themselves late nights and a weekend session, and agree to have the vote on Wednesday.

"Democrats were willing to use any number of dilatory tactics, many of which would probably carry us into next week," Sen. John Thune said, adding that it could delay the vote until "potentially" beyond the State of the Union if Democrats used their "full arsenal of tools."

McConnell spoke by phone with President Trump before introducing the resolution that calls for the Wednesday vote, according to two people familiar with the call.

“Leader McConnell called President Trump before he introduced the resolution. They discussed the details and the President signed off," a source familiar with the call said.

The Democrats' third amendment has been tabled. This amendment called for the Senate to subpoena John Bolton, and spend one day on his deposition and one day on live testimony — both of which must occur within five days.

The vote to table passed 51 to 49. Republican senators Mitt Romney and Susan Collins voted for a second time tonight with the 47 Democrats against tabling the amendment to subpoena Bolton.