Ambassador Marie Yovanovitch has retired, according to a senior State Department official. It is unclear when she retired, but the official said it was sometime in the last two weeks.

Yovanovitch was a career foreign service officer for more than 30 years, who was pulled from her post as Ambassador to Ukraine at the order of President Donald Trump.

Yovanovitch is the fourth top State Department official who has departed in the wake of the Ukraine impeachment inquiry. The others are former US Ambassador to Ukraine Bill Taylor, former Special Representative for Ukraine Kurt Volker, and Michael McKinley, the former senior adviser to Secretary of State Mike Pompeo.

NPR was first to report her retirement, which comes about two months after she provided public testimony as part of the House impeachment inquiry. She said she was “devastated” to find out that Trump had discussed her in such a negative way during his call with President Volodymyr Zelensky in July. She said Trump’s comments about her “sounded like a threat.”

Yovanovtich did meet with diplomatic security after the revelations earlier this month that Robert Hyde and Lev Parnas were discussing surveilling her while she was in Kyiv. That investigation has not yet concluded.

Pompeo has never defended Yovanovitch by name. During an interview in Ukraine today, when asked if he felt any moral tension about Yovanvotich, Pompeo said he did not.

“We delivered for the President of the United States on a Ukraine policy that will benefit the American people I hope for years and years to come,” Pompeo said in an ABC News interview.

More background on Yovanovitch: In May 2019, Yovanovitch was recalled to Washington, months earlier than expected. The State Department said at the time that Yovanovitch was "concluding her 3-year diplomatic assignment as planned" and that her departure aligned with the presidential transition in Ukraine.

The Senate is on recess as Senate leadership try to negotiate a path forward on the impeachment trial.

Republicans are meeting in the Strom Thurmond Room, which is near Senate Majority Leader Mitch McConnell’s office and the Capitol Rotunda on the second floor of the Capitol.

A big part of the debate among Republicans now is when senators would begin floor speeches.

Sen. John Cornyn told CNN Democrats want to try to “embarrass” the President by insisting on a Wednesday acquittal vote — after the State of the Union. Cornyn said they would try to move it up, including potentially with a weekend session.

But the talks will continue.

“Well, we’re still trying to figure out how to land the plane."

Meanwhile, Democrats are meeting in the LBJ Room, their normal meeting room just off the Senate floor. 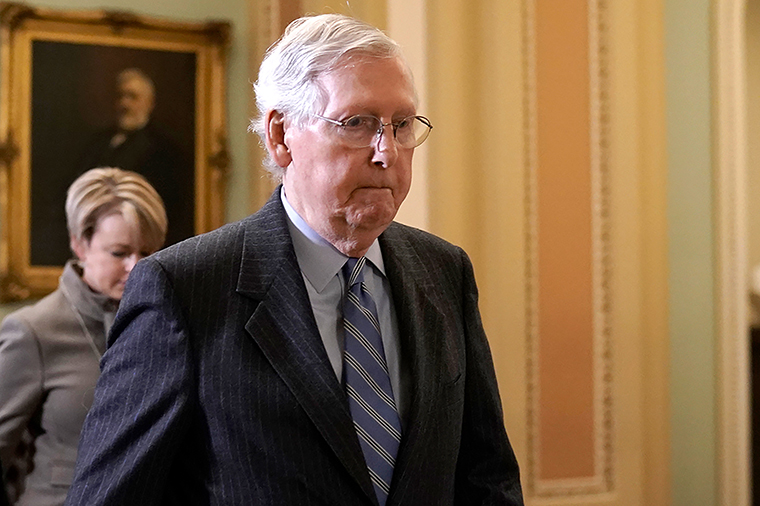 Senator Majority Leader Mitch McConnell says senators are discussing the next steps in the impeachment trial.

“Senators will now confer among ourselves, with the House Managers, and with the President’s counsel to determine next steps as we prepare to conclude the trial in the coming days,” he said in a statement.

Read McConnell's statement in full below:

A majority of the U.S. Senate has determined that the numerous witnesses and 28,000-plus pages of documents already in evidence are sufficient to judge the House managers’ accusations and end this impeachment trial.

There is no need for the Senate to re-open the investigation which the House Democratic majority chose to conclude and which the Managers themselves continue to describe as “overwhelming” and “beyond any doubt.” Never in Senate history has this body paused an impeachment trial to pursue additional witnesses with unresolved questions of executive privilege that would require protracted litigation. We have no interest in establishing such a new precedent, particularly for individuals whom the House expressly chose not to pursue.

Senators will now confer among ourselves, with the House Managers, and with the President’s counsel to determine next steps as we prepare to conclude the trial in the coming days.

After the vote to call witnesses failed, Sen. Chuck Schumer spoke outside the Senate floor calling it "a grand tragedy."

"America will remember this day, unfortunately, when the Senate did not live up to its responsibilities, when the Senate turned away from truth and went along with a sham trial," Schumer said.

He said he will now going back to the Democratic caucus to discuss what they're going to do next.

The Senate just voted down a motion to allow witnesses and documents at the trial.

Now, they're on another break. The recess, announced by Senate Majority Leader Mitch McConnell ahead of the witness vote, will allow more time for more negotiations with Schumer about an endgame to the impeachment trial, reports CNN's Manu Raju.

We're still not sure exactly what will happen after the recess.

The Senate just voted down a motion to compel witnesses and documents at the impeachment trial.

Republican Sens. Susan Collins and Mitt Romney voted with the senators who caucus with the Democrats in support of the motion.

The Senate just came back following a break.

Sen. Susan Collins is “trying to help come up with a solution here," a source says.

"She thinks everyone should have an opportunity to state their views on the record — but she’s not looking for extra time for speeches. In fact, she doesn’t care how much time members get. She thinks the speeches can be short," the source went on.

CNN has reported that GOP senators are split on next steps in the impeachment trial, with some favoring a quick acquittal and others supporting the opportunity for senators to deliver speeches.

As the break continued and Chuck Schumer and Mitch McConnell’s conversation came to a close, McConnell convened with his top aides including his floor director and chief of staff. They were joined by Sens. John Thune, John Cornyn and at one point John Hoeven who seemed most interested in getting a sense of where things stood.

McConnell’s crew convened for several minutes with staff taking turns explaining something to members. Then, Laura Dove, McConnell’s floor director, seemed to seek approval from Thune on something. Once Thune indicated he was in support, she turned to McConnell and then buzzed away.

Meanwhile, a series of bipartisan odd couples were spotted on the floor. After 10 days of intense partisanship, Senators were literally crossing the aisle with Kyrsten Sinema, a closely watched Democrat from Arizona, making her rounds to visit with GOP colleagues including James Lankford, Mitt Romney and Thune (the GOP whip). We still don’t know how Sinema plans to vote on impeachment.

Sen. Lisa Murkowski was seen with Democratic Sen. Brian Schatz. Roy Blunt was with Sheldon Whitehouse, and there appeared to be a very animated conversation between Ted Cruz and Amy Klobuchar that Kristin Wilson spotted through the Democratic cloakroom door.

The Chief Justice could also be spotted chatting up Lindsey Graham.